Starting at
$5.00 for 30 days
Get Started
View all rates
You are the owner of this article.
Edit Article Add New Article
You have permission to edit this article.
Edit
Home
News
Schools
Sports
Things to Do
Vermont Life
Real Estate
Obits
Editorial
Classifieds
Messenger FAQ
Business Directory
About Us
e-Edition
2020 Meet Your Business Community
2020 Resource Directory
2020 Discover Guide
1 of 6 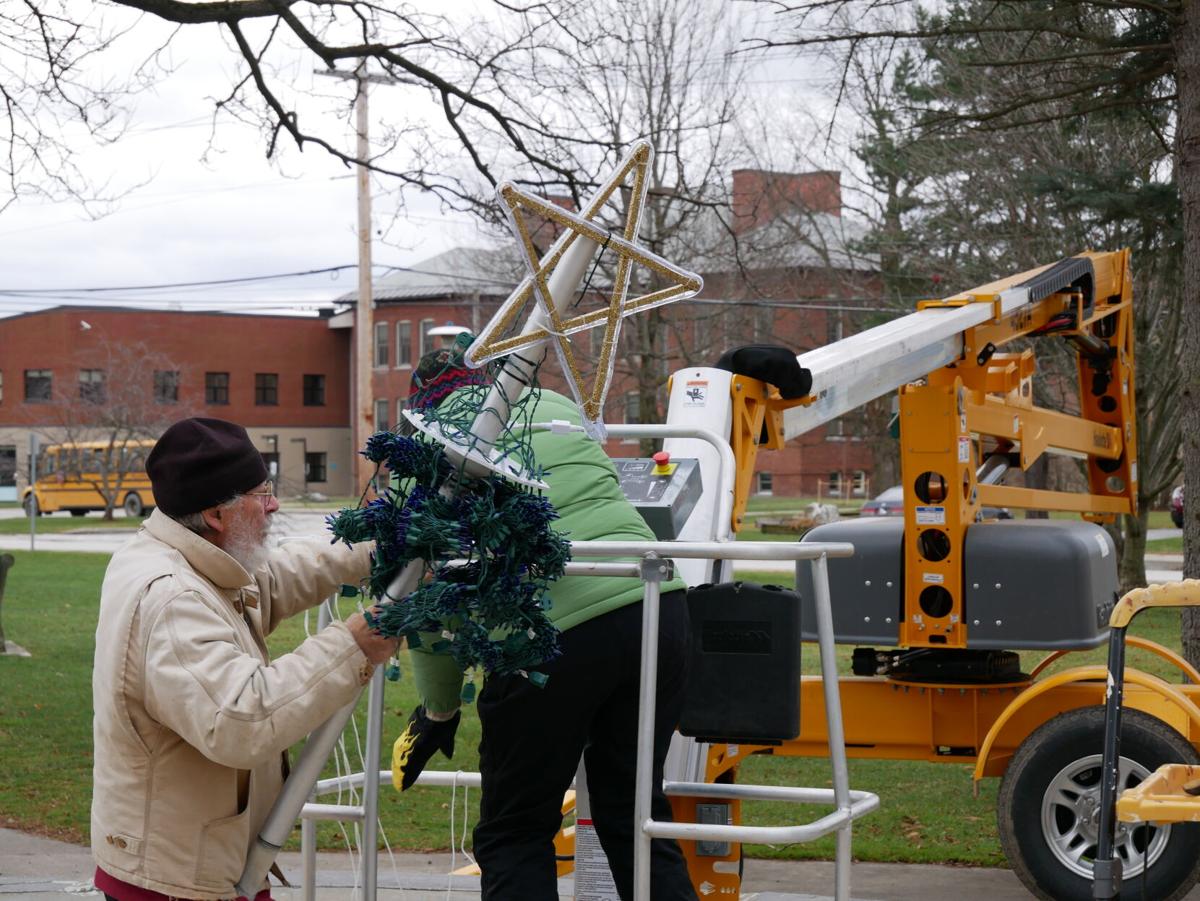 Enosburgh’s David and Sally Tryhorne prepare to hoist the peak of a lights display in Lincoln Park. 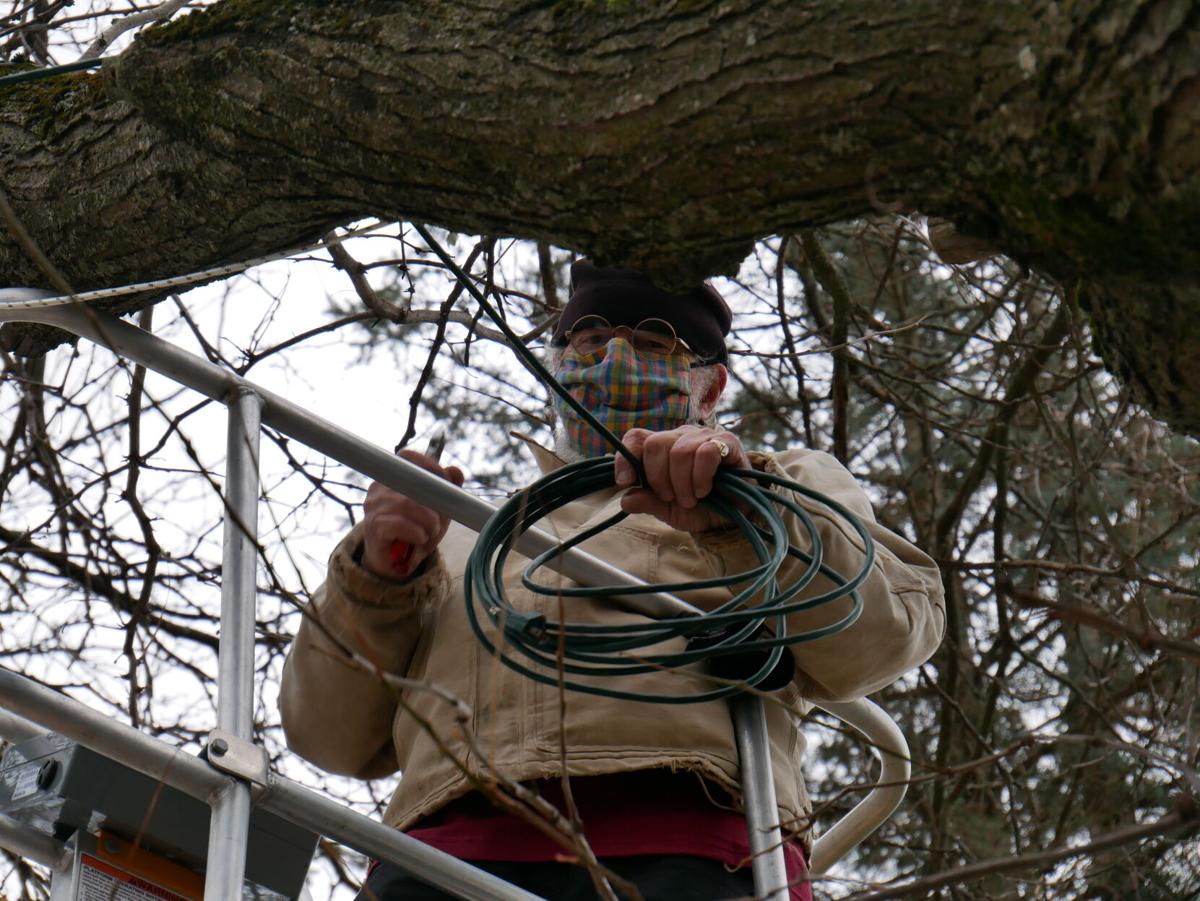 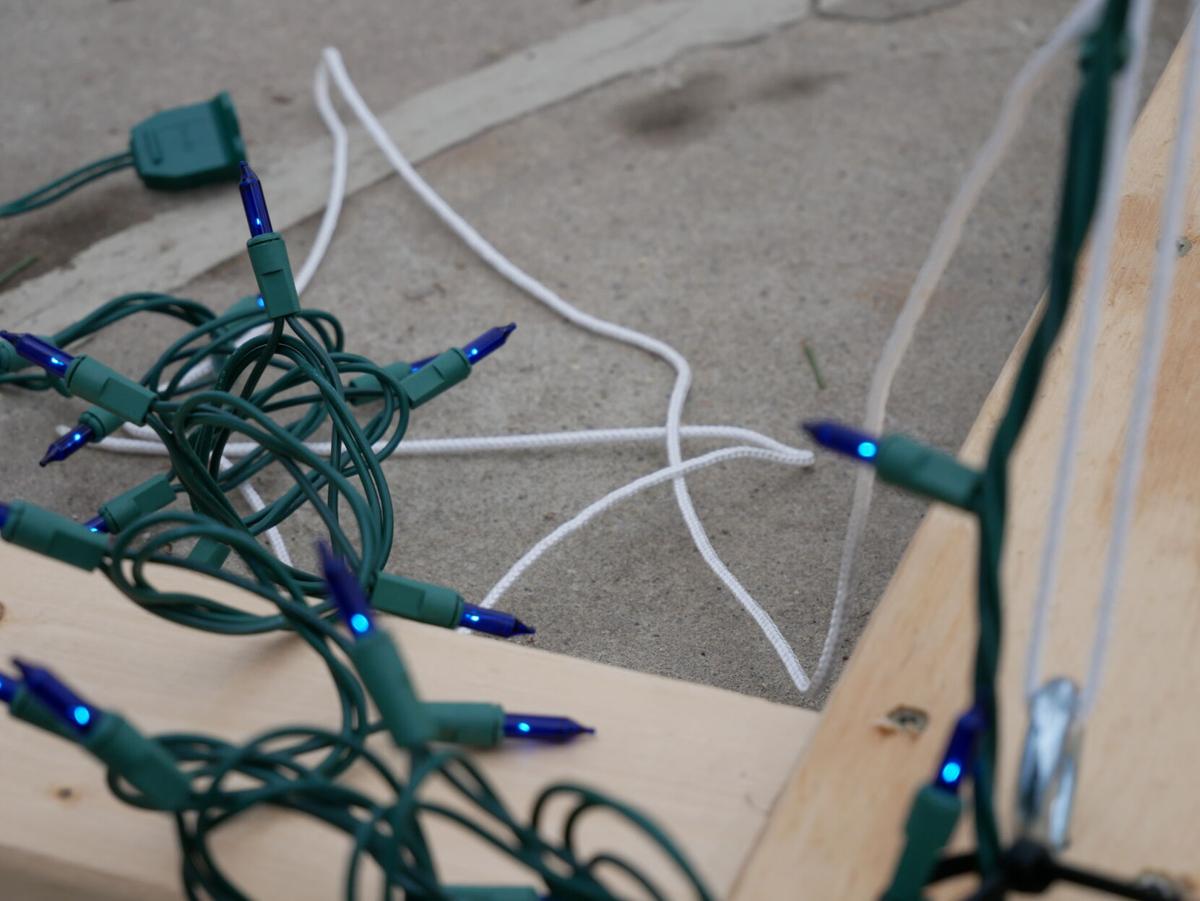 A strand of lights sits unfurled near the base of a lighting fixture in Enosburg Falls' Lincoln Park. 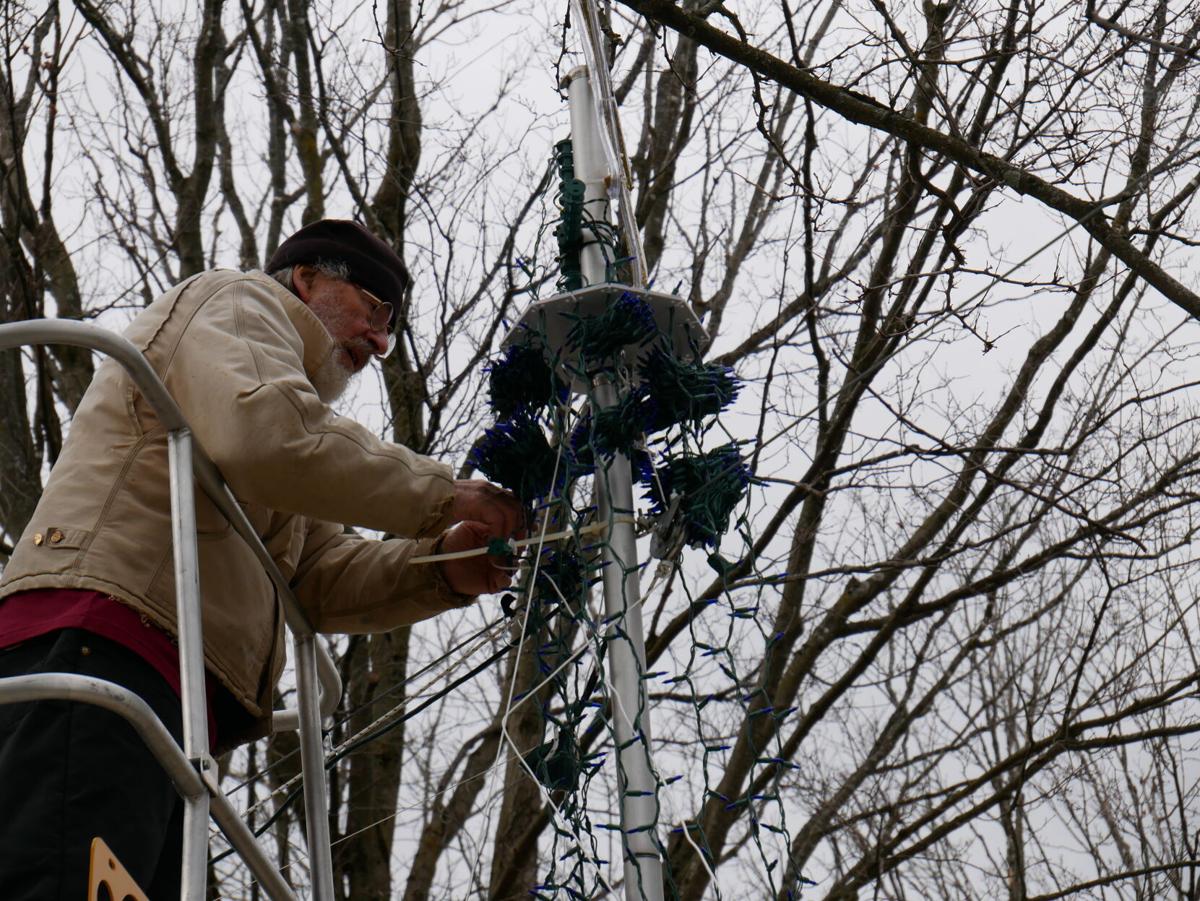 David Tryhorne, a longtime Enosburgh resident and local volunteer, helps arrange the lights on a display in Lincoln Park. 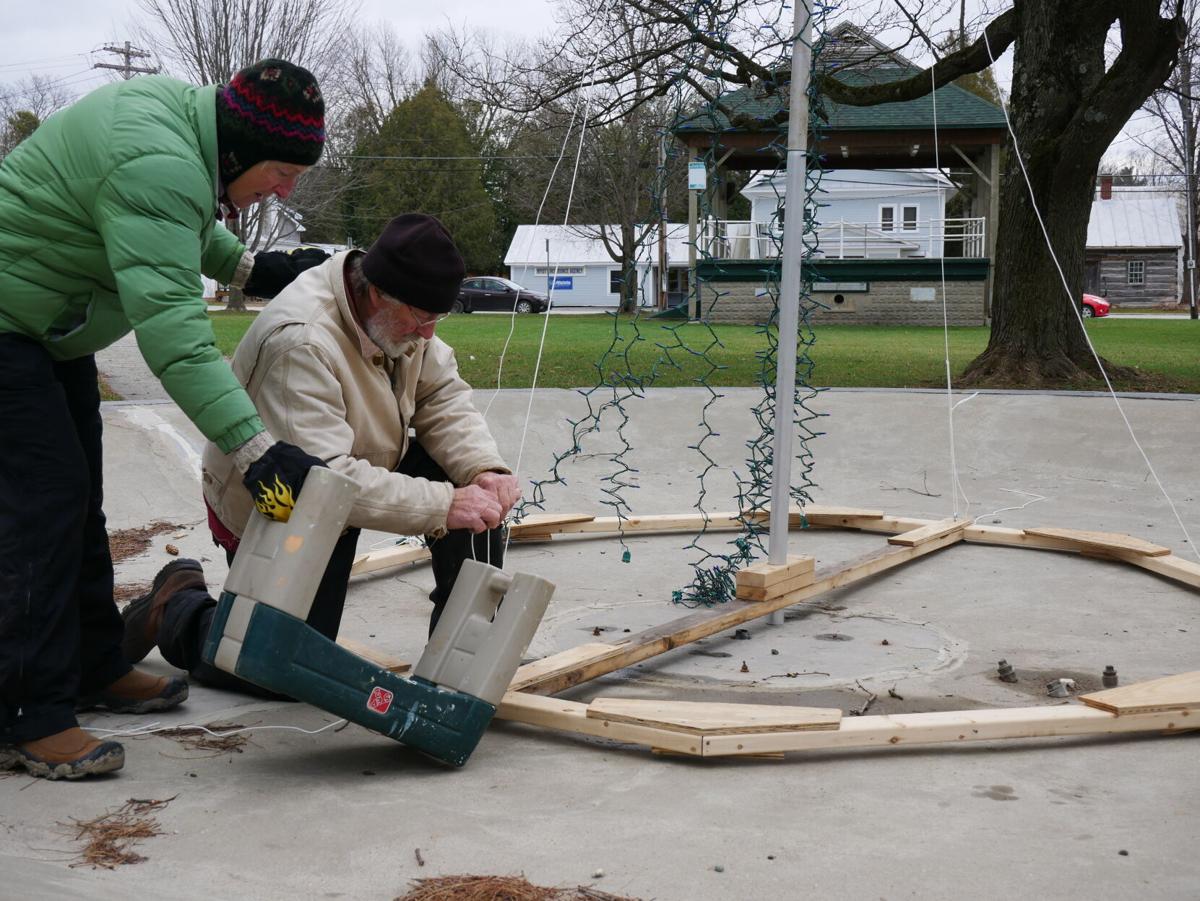 Volunteers David and Sally Tryhorne help install a light fixture in Enosburg Falls’ Lincoln Park. The fixture, the silhouette of a tree, sits where the park’s water fountain is typically found. The fountain has been retired for the winter. 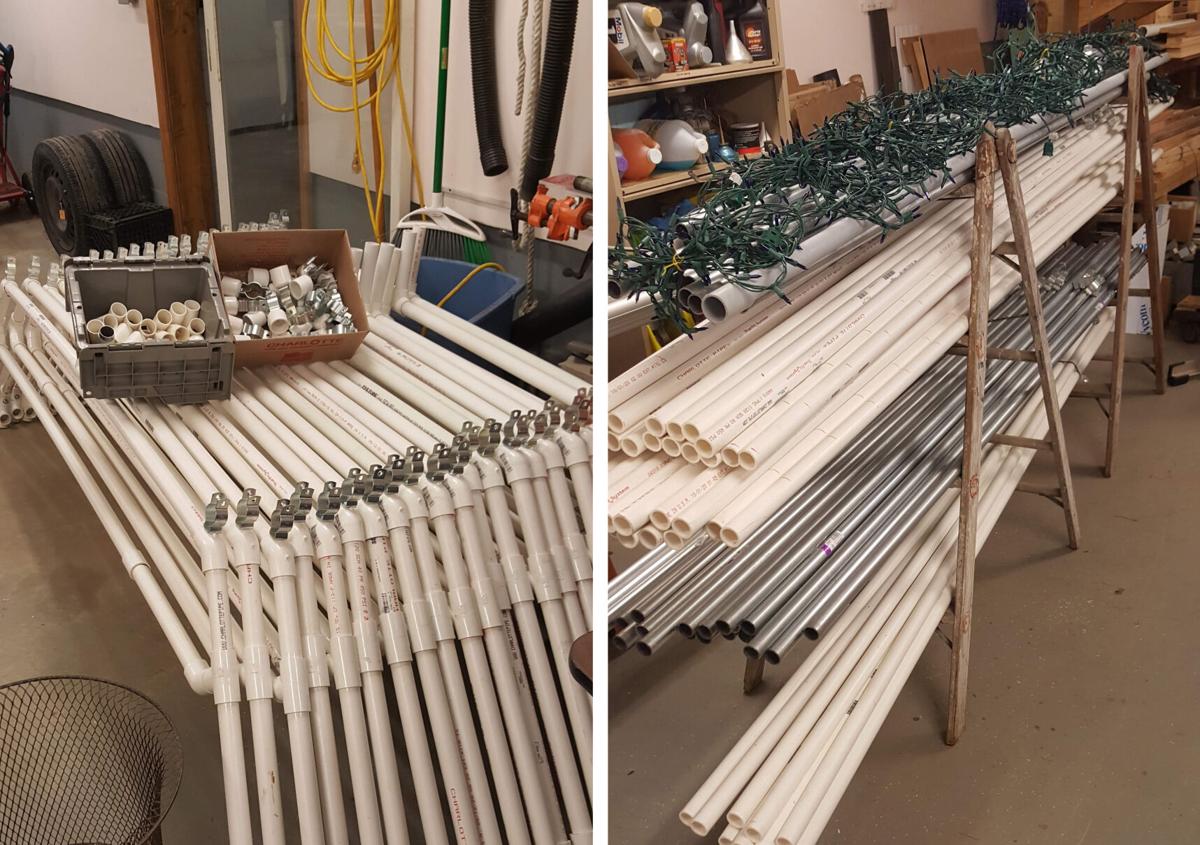 Homemade struts sit in David and Sally Tryhorne's Enosburgh workshop. In the coming days, the struts will be built into tunnel-like "bridges" draped in holiday lights in Enosburg Falls' Lincoln Park.

ENOSBURG FALLS – Passersby through Enosburg Falls can count on their winter being a little brighter this year.

Once all is said and done, tunnels lined with Christmas lights will beckon visitors to the park’s core, where, in the place of the park’s fountain, a lights display taking the silhouette of a tree will look over much of the park.

In the words of the Enosburg Business Association’s Sandy Ferland, the hope is that a glowing Lincoln Park could serve as a “beacon of hope” for the people of Northern Vermont during a winter loomed over by an ongoing COVID-19 pandemic.

Inspiration for a lighting fixture in Lincoln Park came, according to Ferland, from photos of a popular lights display at the Joseph Smith Birthplace Memorial in South Royalton where, every winter, the memorial’s accompanying grounds are aglow with holiday lights.

It was a tunnel-like display called a “bridge” that caught Ferland’s eye, Ferland told the Messenger. “I took one look at that bridge and thought we could do this in the park,” she said.

In the case of Lincoln Park, those tunnels, dubbed “Bridges of Hope” by Ferland and fellow Enosburg Business Association members, would trace four of the five footpaths leading to the park’s central fountain. In the place of the fountain will be a display shaped like a Christmas tree with a star on top.

The overall lights display, according to Ferland, will be secular, with few references to a specific holiday celebration and will instead prominently feature the blues and whites often thought of as the colors of peace. Ideally, Ferland said, the park will remain lit through the holiday season and glow until February.

“It’s going to be a place for people to come in the midst of this [pandemic] and find some peace,” Ferland told the Messenger during a visit with the Tryhornes in Lincoln Park. “I look at this like a visit with a local psychiatrist,” she added with a laugh.

Light posts and trees around the parks will likewise be dressed in strands of holiday lights, as will – more “tastefully,” according to Ferland – the bandstand and the Spirit of the American Doughboy statue bookending the Enosburg Falls park.

In all, more than 16,000 lights will be strung around Lincoln Park by the time the Tryhornes and Enosburg Business Association wrap up several volunteer-driven installation days in the park.

The physical work for the lights display comes courtesy of volunteers from the Enosburg Business Association and from the Tryhornes, two Enosburgh Initiative veterans and lifelong area residents who spent much of the summer helping restore the exterior of the nearby Free Mason’s Lodge.

Financial support comes largely from the Enosburg Business Association, with an additional $500 in funding sourced from Enosburg Falls’ village government following voters’ formal approval of the allocation during this year’s village meeting in March.

Currently, the “Bridges of Hope” intended to serve as the park’s starring displays are sitting disassembled in the Tryhornes’ Enosburgh workshop, waiting to be assembled after four or five different prototypes preceding them, according to the Tryhornes.

Once installed, the tunnels will each stretch 20 feet out from the park’s center, draped in white lights and large enough to, according to Ferland and the Tryhornes, safely accommodate the social distancing public health officials recommend amid the current COVID-19 pandemic.

“It’s just a positive thing,” Sally Tryhorne told the Messenger, “and don’t we need it.”

“I don’t think it’ll be a positive thing for just Enosburgh, too,” David Tryhorne said. “It’ll be for the whole area.”

Several volunteer build out days are planned for the coming days, with the final goal of having the displays ready for a Nov. 28 lighting date to coincide with when the Enosburg Business Association originally hoped to host its now cancelled annual lights parade.

According to Ferland, the Enosburg Business Association’s hope is that the lights can become a regular wintertime fixture for Lincoln Park.

ENOSBURGH – Enosburgh’s annual holiday lights parade has been cancelled this year due to a climbing number of COVID-19 cases, an Enosburg Busi…