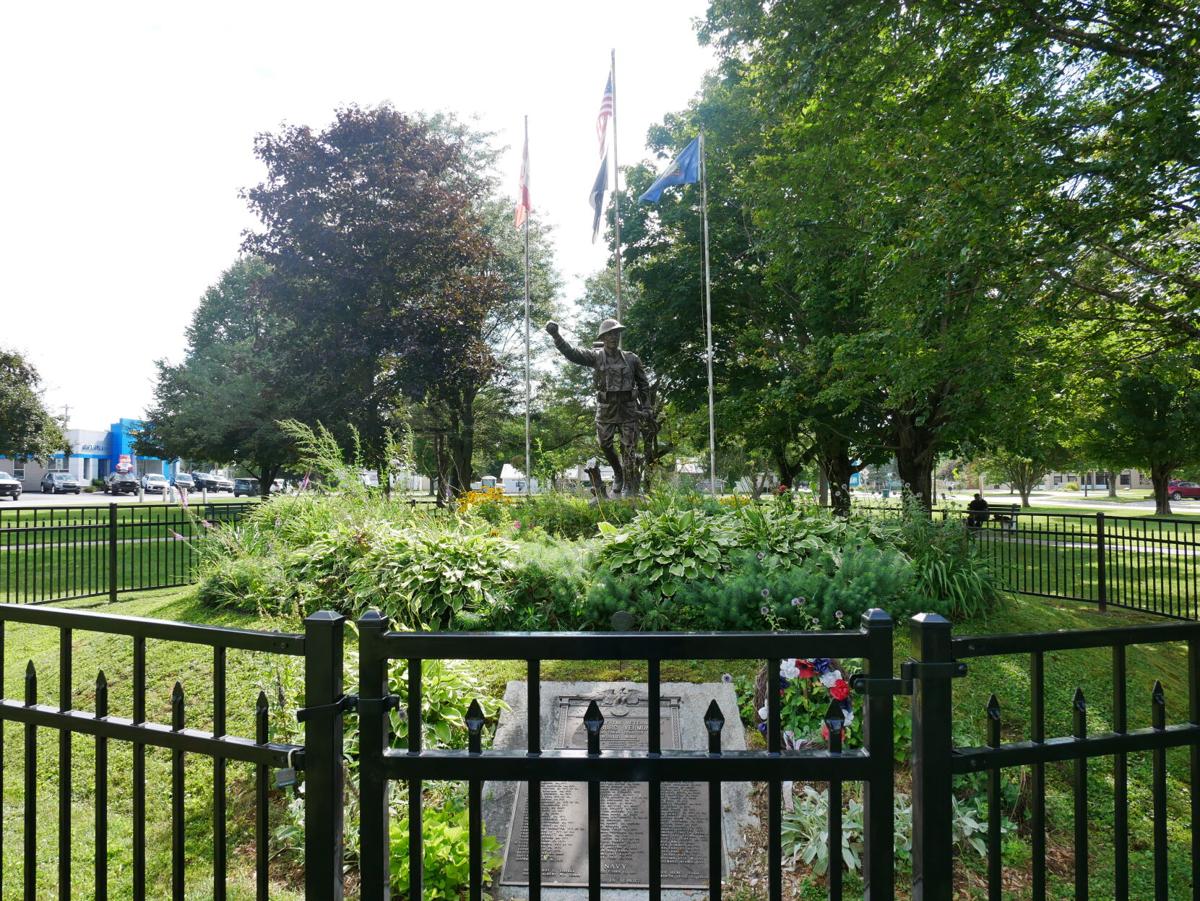 The “Spirit of the American Doughboy” statue — one of only two such statues in Vermont — stands above his beautified perch in Enosburg Falls’ Lincoln Park. 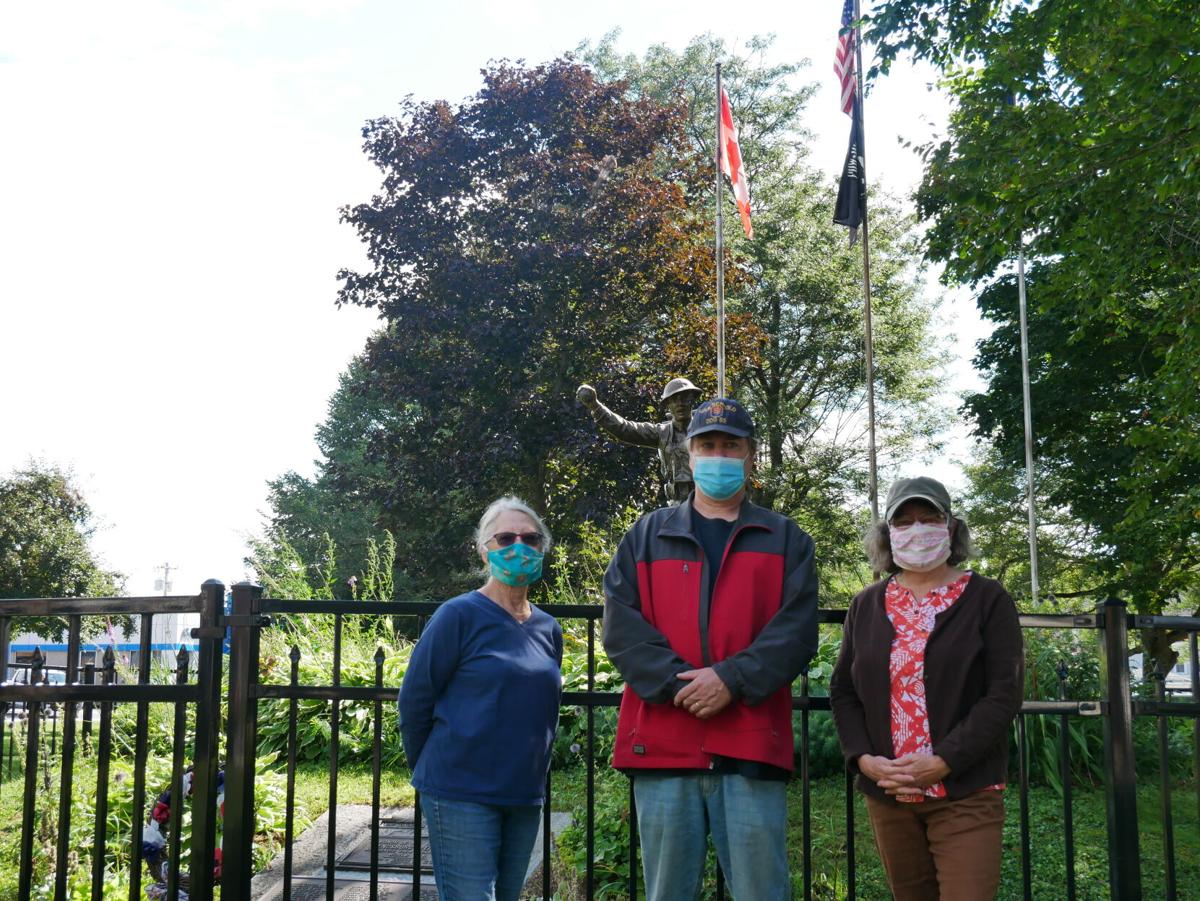 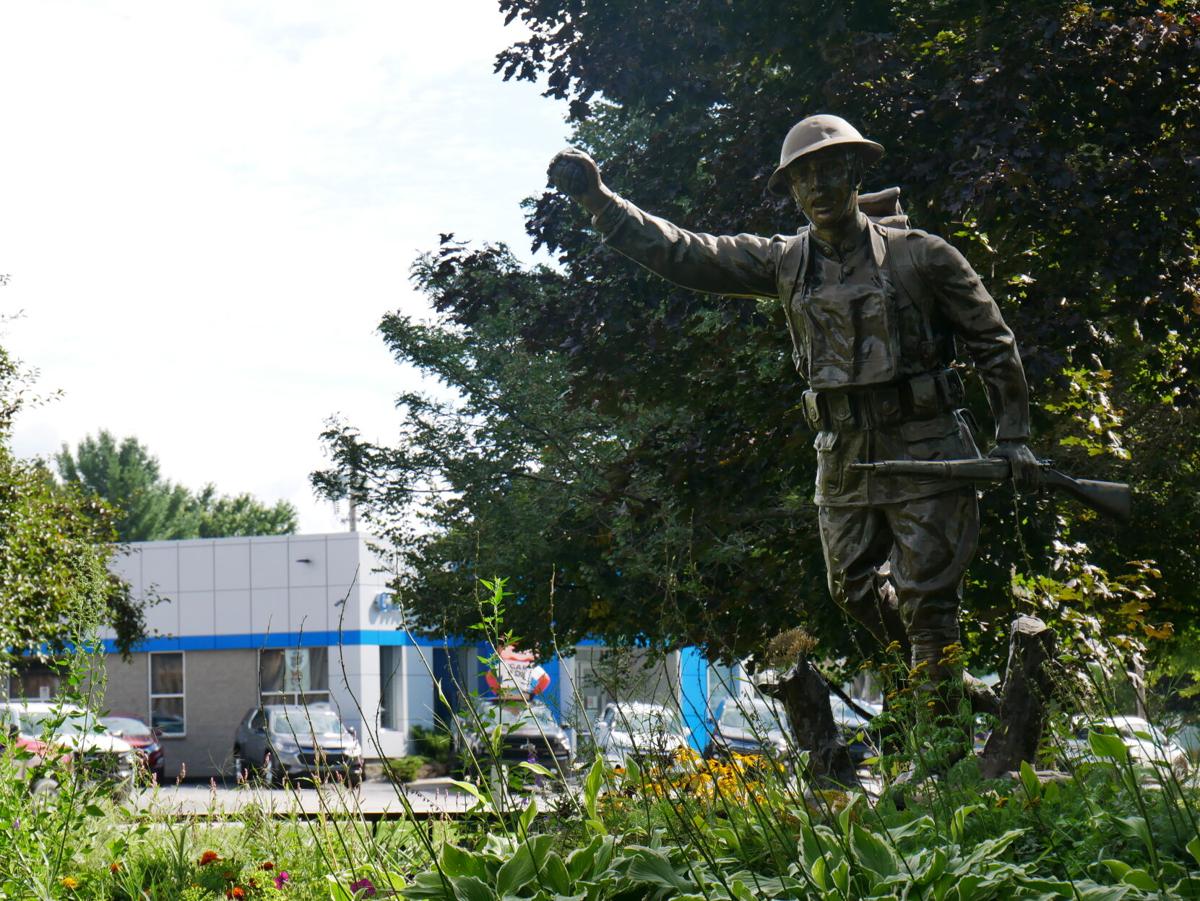 Enosburg Falls’ Spirit of the American Doughboy can now be admired up close at his Lincoln Park perch. 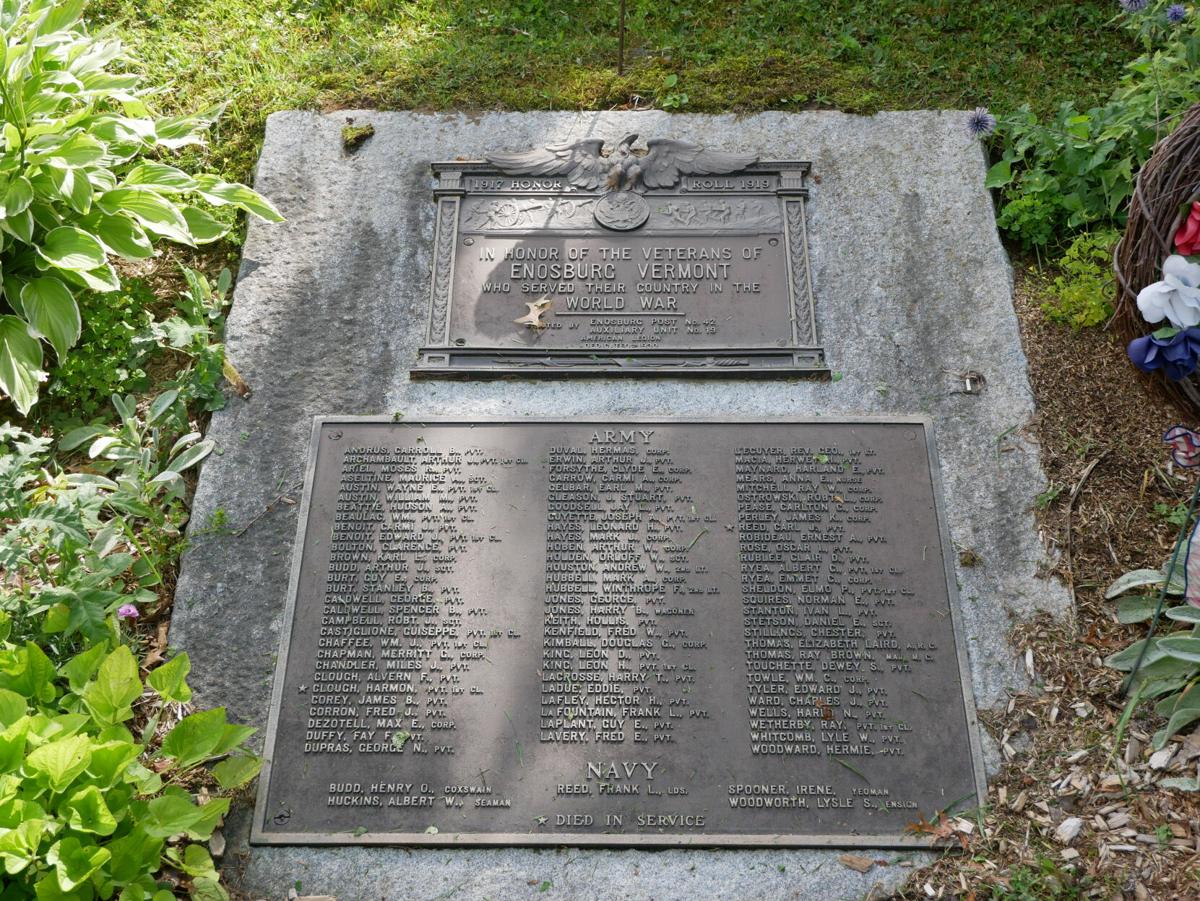 A memorial in Lincoln Park lists the names of 81 Enosburgh residents who served during World War I. Two of those listed, Pvt. Carl Reed and Pvt. 1st Class Harmon Clough, died while overseas.

ENOSBURG FALLS – Once confined within an uninviting fence and hidden from view, a 90-year-old American “Doughboy” cast in bronze now looms large over Lincoln Park.

At his base grows a ring of well-kept plants and, just past that, an iron fence resembling the cemetery across Main Street from the park, cast low enough so one can finally see the bronze World War I soldier leading his charge over an imagined French battlefield.

It’s quite the sight, according to the trio of local leaders who met with the Messenger in Lincoln Park.

“He’s a handsome fellow,” Sandy Ferland, the vice president of the Enosburg Business Association and one of the many locals caught up in the Enosburgh Initiative, quipped.

“To not be able to walk up and see him,” Dan Cunningham, the commander of the local American Legion post, said, “that’s a disservice.”

The Doughboy now sits front and center in a Lincoln Park that is itself the focus of an initiative aiming to improve Enosburgh overall. The statue is the focal point of a campaign that’s also touched up nearby monuments and led to the addition of a public port-o-let earlier this summer.

It’s that initiative who, with the blessings and support of numerous Enosburgh-centered organizations and the village government, removed the metal fence once wrapped around the Doughboy and two other nearby monuments and tidied up the monument’s base.

The same initiative is looking even further ahead, imagining a full restoration job for the historical Doughboy statue and a new array of flags to stand at the soldier’s back.

For years, the Doughboy, one of only two once-popular Spirit of the American Doughboy statues raised in Vermont, was shrouded by a metal fence intended to protect the statue from vandalizers who, amid the annual chaos of a 1960s Cabbage Night, ran away with the Doughboy’s bronze rifle.

The fence, according to Cunningham, came at the behest of the local American Legion post, the statue’s formal owners who feared further damage to the statue and the World War I memorial at its feet.

However, despite the fence’s unwelcoming nature – the Enosburgh Historical Society’s president, Cindy Weed, described it as a “dog fence” – the fence stayed in place for decades, hiding the Doughboy and its accompanying World War I memorial from view.

“I think they felt it was the safest thing to do,” Ferland said.

As the 1900s gave way to the 2000s, conversations in town started to change and hit a fever pitch as the Enosburgh Initiative, an unofficial group of locals who came together to improve their community, began meeting and their conversations began translating into achievable goals.

Organizers started asking why the statue, perched very visibly in the center of Enosburg Falls, continued to be caged off from the world.

Their conclusion, apparently reached earlier this year, was that Enosburg Falls’ own Spirit of the American Doughboy – and the village as a whole – would be better served by allowing the statue to stand as the centerpiece it was, according to Cunningham.

“Everything kind of happened this year because people started asking questions,” Cunningham said. “We’ve really made an effort to make the park more inviting and welcoming.”

A myriad of organizations making up Enosburgh’s public life, from the Legion and the Enosburg Business Association to Enosburg Falls’ board of trustees, began raising funds for improvements to the memorial space.

Their work ultimately led to the metal fence coming down within a matter of hours and rows of plants, courtesy of locals Sarah Downes and Steve Wadsworth, now tracing the Doughboy’s feet.

A new fence was wrapped around the Doughboy, modeled after a cemetery fence across the street and raised just high enough so the statue could actually be seen from the passing cars driving through Enosburgh’s downtown, and the old monument was presented with a new rifle to hold.

Accompanying monuments were touched up, cleaned so the veterans’ names they memorialized shone brighter, and fresh paint was added to the nearby cannon.

Grander plans are still in store.

According to Cunningham, thousands of dollars raised by the American Legion and several other organizations would be used to fully restore the statue this winter, with a rededication planned to mirror the statue’s original dedication ceremony in 1930.

A historical society newsletter describes thousands having gathered for that celebration, honoring its installation with speeches from one of Enosburgh’s only surviving Civil War veterans and the president of Norwich University, the Northfield military college and the oldest such college in the U.S.

While Cunningham doesn’t picture thousands coming out for the statue’s rededication in 2021, he plans on inviting Norwich’s current president to attend the celebration and offer their own remarks. During the same event, Cunningham said the American Legion plans to formally gift the statue to the village.

According to the historical society, plans are also underway to formally list the statue on the National Register of Historic Places, a status previously awarded to two such Spirit of the American Doughboy statues looming over parks in Arkansas.

Their work, according to Cunningham, is done in part to improve Enosburgh overall and in part to commemorate the 81 names listed below the Doughboy, each of whom joined the armed services as America entered its first world war and two of whom wouldn’t come home.

“Back then, most of these guys probably hadn’t ventured further than Burlington,” Cunningham thought aloud. “To think of the courage, at their age, to get on a boat and go off to France.”

He came back to the number of names listed on the monument: 81.

“In a community as small as Enosburgh, that touched every family,” Cunningham said. “Everybody knew somebody.”

Meanwhile, all three agreed the change to the park was immediately noticeable.

“I don’t remember it looking like this at all when I think back to my childhood,” Ferland said.

“People are just starting to think about the possibilities,” Weed agreed, extending the sentiments to work in the Enosburgh community at large.