A hush fell over the crowd of about 35 people attending the Missisquoi Valley School District’s Sept. 7 meeting when school board chair Chris Shepard made an announcement.

He told the crowd the meeting would be canceled if some audience members didn’t put masks on.

The group in attendance, many of whom appeared to have the intention of using the public comment period of the meeting to voice their concerns over the district’s mask mandate in its schools, included a few who still chose not to comply.

Shepard then canceled the meeting moments before it was set to begin.

Some at the meeting questioned what the definition of a mask is, and others later questioned the legality of canceling the meeting.

“Our board really respects community engagement and is always willing to listen, but we can't be disrupting the business of the school board meeting when the board has made a decision and that's to follow the guidance,” MVSD Superintendent Julie Regimbal said.

Immediately following the meeting’s cancellation, some followed board members to their cars, shouting and cursing at them in an attempt to intimidate.

Shepard said that although he parked his car in a different area than where the commotion was occurring, he heard from where he was walking disrespectful comments being made toward board members.

The board’s next meeting is scheduled for Sept. 16, and law enforcement will be present to help enforce the mandate.

“We're not enforcers, that shouldn't be our position,” Shepard said in a Sept. 14 interview. “And so if we ask somebody to do something and they flat out refuse. Yeah, there has to be some sort of check and balance.”

Municipalities are allowed to require masks by law

Steve Martel, a Swanton resident and parent of an MVSD student and an outspoken critic of the district’s mask mandate, wore a mask at the meeting and said he wasn’t surprised by the board’s decision to cancel.

“I was wondering, how he had the authority to do that? He didn’t call the meeting to order and he didn't ask other board members what they thought about it,” Martel said in a Sept. 13 interview. “And I know the rule for masks is for the students but who says it's for parents coming into a public meeting?”

Vermont’s Open Meeting Law requires meetings of public bodies to be open to the public at all times in order to promote transparency and accountability in government, according to the Vermont Secretary of State’s website.

The meeting chairperson can establish “reasonable rules” for public comment, the law states. These rules, the website says, should strike a balance between encouraging public comment and allowing for efficiency by managing time, safeguarding orderly proceedings, ensuring proper decorum and maintaining order.

"The simple answer is we don't know,” he said. “There's nothing definitive in statute or anywhere that says anything about mask mandates.”

The group protesting the district’s mask mandate has grown since the board unanimously voted to authorize Regimbal to develop guidelines in accordance with the state’s guidance Aug. 10.

At the next meeting, Aug. 19, 13 people spoke of their belief in the importance of personal freedom, some saying mandating masking is akin to psychological abuse, while questioning the science around masking and the vaccine as well as the political leanings of science officials in charge.

They were among about 50 who showed up to protest the mask mandate in the school in favor of a system that lets people decide for themselves.

The Vermont Agency of Education and the Vermont Department of Health have both recommended mask mandates for the beginning of school.

Regimbal’s initial guidance released before the Aug. 19 meeting included a requirement that all visitors in the school had to wear a mask, she said, but it was not enforced, as school had not started yet and the board felt it was important that people were able to express their concerns. 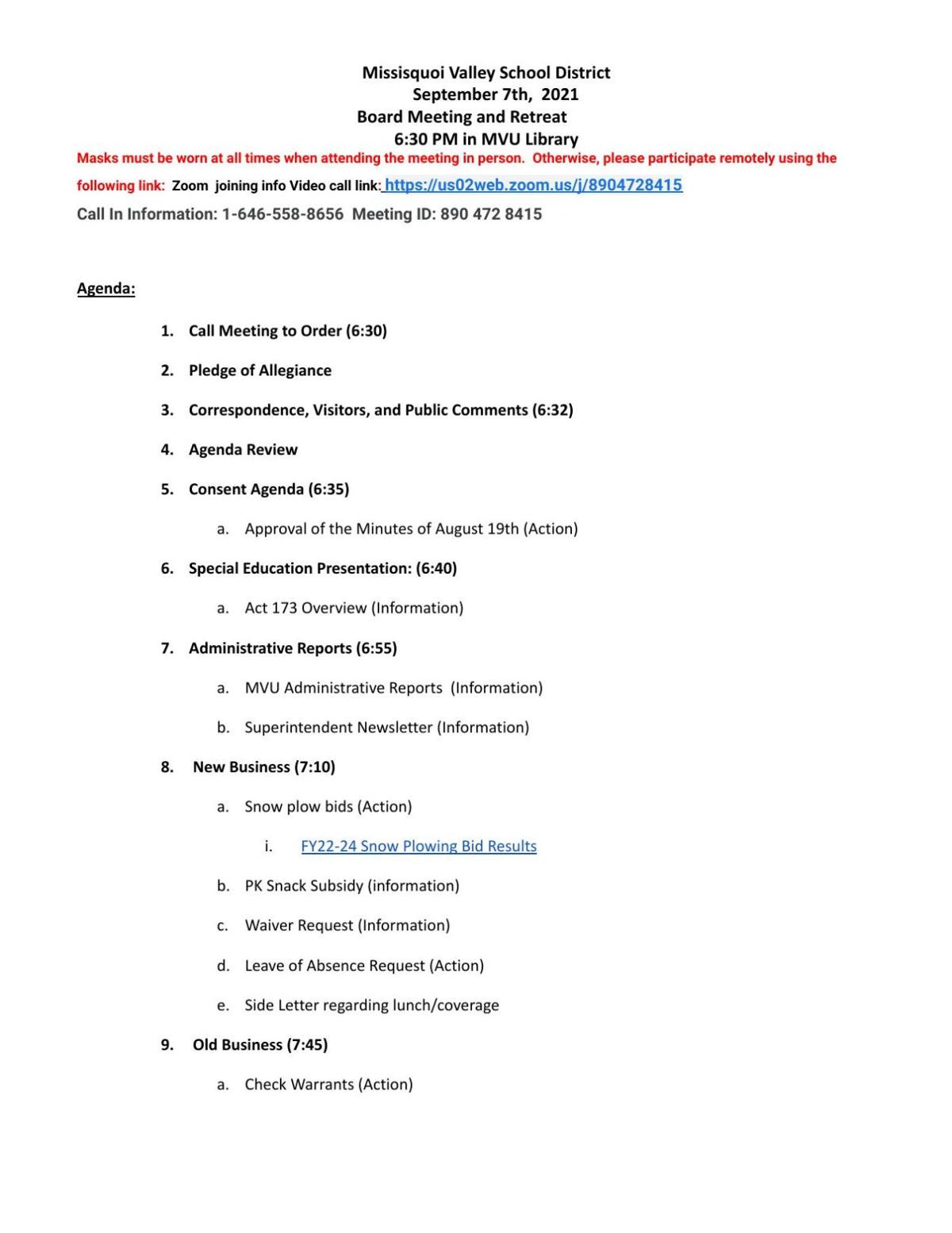 This time, however, Regimbal noted the board had publicized the mask requirement on the agenda for the meeting. The agenda, released Sept. 3, has red lettering stating that masks must be worn at all times if in person. It also offers the option to participate remotely through a Zoom link.

Remote-only meetings are no longer legal in Vermont, though a virtual option, otherwise known as a hybrid meeting, is still acceptable, according to the Secretary of State’s website. The law permits public participation only “as long as order is maintained.”

Shepard added that though the board has received emails from parents who oppose the mask mandate, the vast majority of emails showing up in his inbox are from people who are in support of the board’s decision.

“There's a lot that went into our decision,” Shepard said. “It wasn't just a quick thing that we tried to sweep under the carpet.”