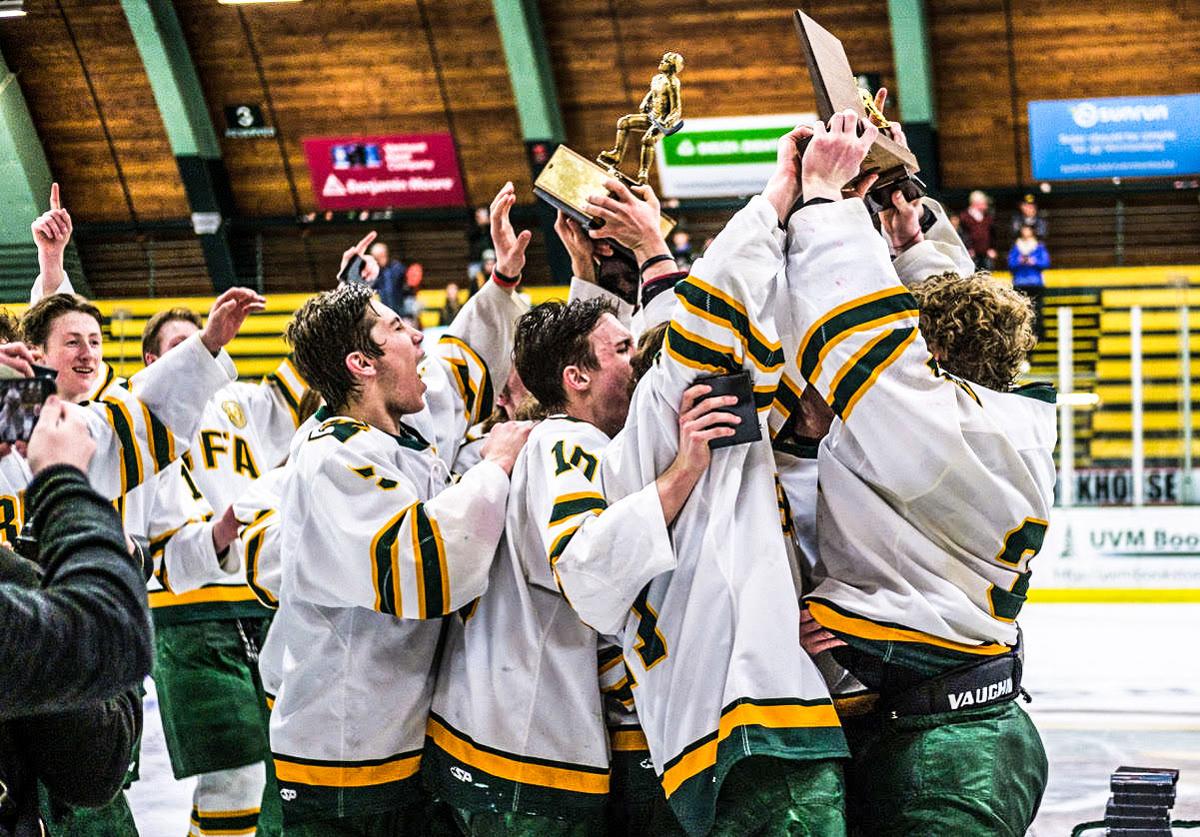 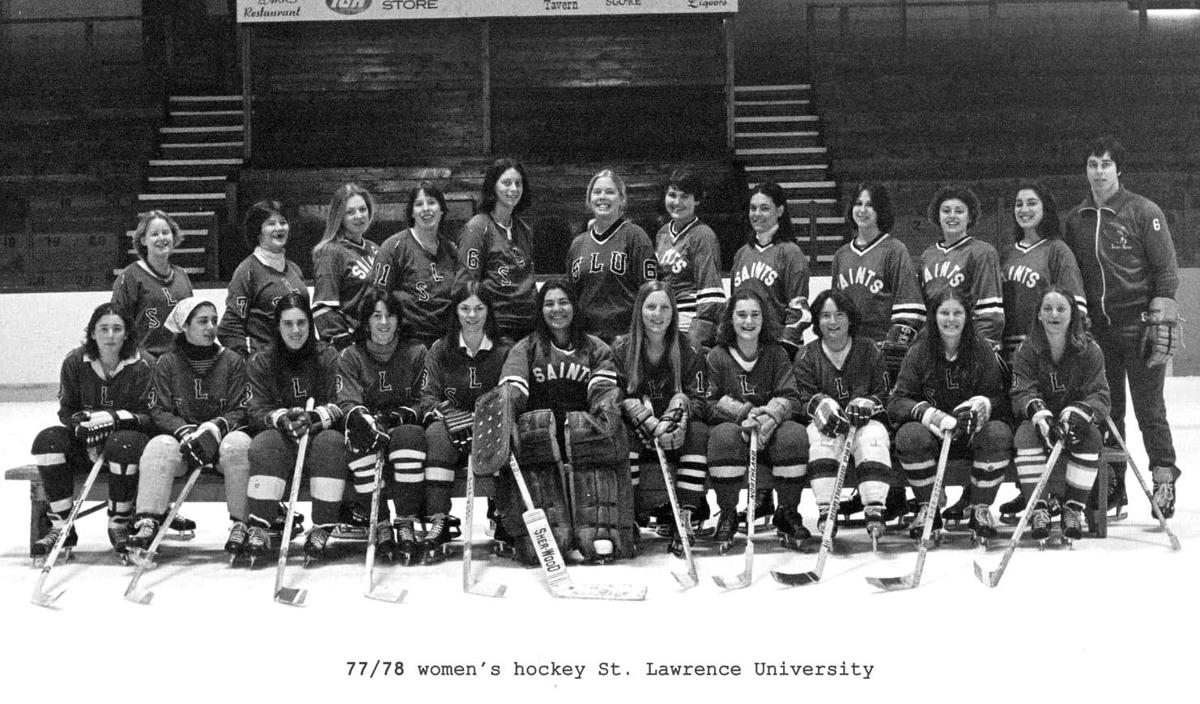 ST. ALBANS — Tom McDonald came to St. Albans 41 years ago to begin his first coaching and teaching career at BFA.

Little did he know he’d spend 37 years teaching in his new hometown and four decades with the Bobwhite hockey team.

MacDonald coached the Bobwhites on his own in his early years and then went on to assist Red Gendron and Toby Ducolon.

“It seems like a long time, but it’s more fun than it is work,” said McDonald with a chuckle. “That’s why I’ve kept going with this. We keep threatening to retire, but Toby and I and the staff keep enjoying it.”

This year, MacDonald was one of three coaches named Coach of the Year by the Coaches All-League for Division I boys hockey.

“It’s an award I’ve never received and never thought I would,” said MacDonald, candidly. “It’s a product of Toby’s work with the team that we had.”

Ducolon, Macdonald, and the staff celebrated the program’s 19th state title in early March at Gutterson.

“Toby has said it; we’ve never had a team that improved like this through the season. That’s a tribute to them and their work; it was a lot of fun to watch.

“The guys were very encouraging of each other. If anyone got negative, they were quick to pick each other up.”

“They’d go out to dinner and enjoy each other’s company. We always encourage the kids to get along and be unselfish, but you can’t force that kind of stuff, and it doesn’t happen all the time.”

Looking back over his years at BFA, MacDonald is sure this one will stand out.

“All the sacrifices these kids made to be successful will make it a year that I’ll remember for a while.

“When we walked out of the last game, we said we didn’t expect that to be the way we would end the year.

“That might have played into our success. I don’t think this group felt like they had to win; they enjoyed the game and enjoyed themselves. Sometimes the expectation of winning is very difficult to overcome.”

This year’s Bobwhites took three losses in the middle of their season, and while some may have doubted, Macdonald and the coaching staff stayed calm.

“Everyone was panicking except for us,” said MacDonald with a chuckle. “We know playoffs are the only part of the year that matters.

“The first ten games improve skills, and then we work on game strategies. You must be prepared to play in the playoffs, and we’re usually prepared.”

MacDonald was extremely grateful that playoffs were able to take place this season. The boys’ DI hockey game was the last game to be played before concerns about the COVID-19 virus crippled the state.

It’s not the first time illness has brought chaos to the athletic community in MacDonald’s tenure.

“We had a state championship delayed for two weeks back in the 80s because Barre was going through some sort of virus. That was a long two weeks.”

MacDonald’s coaching career began while he was a student-athlete himself, playing hockey at St. Lawrence University.

In 1976, MacDonald was asked by a group of women to coach the inaugural St. Lawrence girls’ club hockey team. He’d always wanted to coach, so he agreed to do it.

Macdonald graduated and stayed to complete his Master’s Degree, continuing to coach the team. Two years after he left the school, the team became a varsity sport.

“At the time, I didn’t realize what a unique experience it would be. I had a great time with everyone,” said MacDonald.

Ten people from the original group, including McDonald, got together last year for a team reunion.

“It was very interesting to see how well they were doing and what they have done with their lives,” said MacDonald. “That was a passionate group, and it was neat to be a part of!”

In 1979, MacDonald and his wife Vickie moved to St. Albans to begin a new chapter.

“BFA was looking for a hockey coach. I had no idea what St. Albans was when I got here.”

Macdonald, who had graduated with a physical education degree, taught science, business, and math; he retired as a calculus teacher.

“It was a great experience for me because just about every year I taught, I was learning something new. It allowed me to relate well with the kids.”

In 1981, Gendron took over as head coach of the Bobwhite hockey team, and MacDonald stayed on to assist.

“I learned a lot from Red. He was a passionate person, hockey-wise,” recalled MacDonald.

During Gendron’s years, MacDonald noted that other programs in the state were also getting stronger.

“Initially, it was just St. Albans that had strong feeder programs, but Essex and Barre began to increase in competition,” said MacDonald.

“St. Albans has led a lot of hockey in the state, and the 50th anniversary of the boys’ program last year really showcased the dedication to the program.”

Nine years after Gendron took over the program, Ducolon returned from Peoria to take Gendron’s place. Once more, MacDonald stayed to assist.

“Toby had quite the first year. He won a state championship. We had a special group of kids, one of the better groups to go through BFA.”

It was a full-circle moment for MacDonald who’d coached Ducolon in high school when he played for Gendron.

“Gendron was so passionate outwardly. Toby is also exceedingly passionate, but it showed it in his own way.”

Ducolon’s passion has been a driving force for BFA hockey for 29 years.

“You will not find a person who is more in tune with making sure everything is covered,” said MacDonald of Ducolon.

“We scouted ten games before the championship. We began scouting teams on a weekly basis in December, and at the end of the season, we’d start heavily scouting the teams we thought we might face.”

The two men have now spent 30 years coaching together.

“Toby was consistent from the beginning. I’ve admired that about his coaching--whether you are the best or worst player, you are held to the same expectations on the ice, in the school, and in the community.”

MacDonald had the opportunity to teach and coach another St. Albans legend.

“John Leclair was a wonderful influence on St. Albans,” said MacDonald. “He didn’t think of himself as special. He just enjoyed the game of hockey.”

MacDonald enjoyed the relationships he developed with the kids he coached and taught.

“It was always interesting to see them in the two environments and see what kind of people they were—being able to hold kids accountable in two areas of their lives.

“If you asked kids I taught they’d remember that I’d make them come to class at 6:30 in the morning if they were late. That really cut down on the behavioral issues.

“I always got there at 6:00, so it was no inconvenience to me. I liked that time of day at the school, and I thought the kids might like it too,” said Macdonald laughing.

During his tenure, MacDonald has had the opportunity to work with both Bob Ashton and Dan Marlow, two respected athletic directors.

“Bob was very supportive of all I did, and he got me involved in football, golf, and track and field.

“And Dan Marlow is a spectacular person. He’s done such a great job with everyone--players, coaches, school. We are very lucky; both he and Bob were tremendous people and excellent AD’s.”

Looking back across four decades of involvement with Franklin County’s youth, MacDonald made some wise observations.

“People say that kids are not like we were when we grew up. Each generation has to adapt to the time they are in,” said MacDonald. “Each group of kids I’ve had has been tremendous--there may be some that haven’t been as passionate, some who did stupid things, and some who did remarkable things.

“Things have changed, but the kids aren’t any different. Some are great, and some will drive you nuts; it’s been like that since I was a kid.”

Some of those ‘kids’ have returned to assist the current Bobwhite teams.

“The best thing about this is the interactions that we have with ourselves as coaches. We have three young adults we interact with on a daily basis--they played for us, and now they’re back,” said Mac Donald.

“That’s probably the most enjoyable thing I do. It’s the people we deal with make it special.”