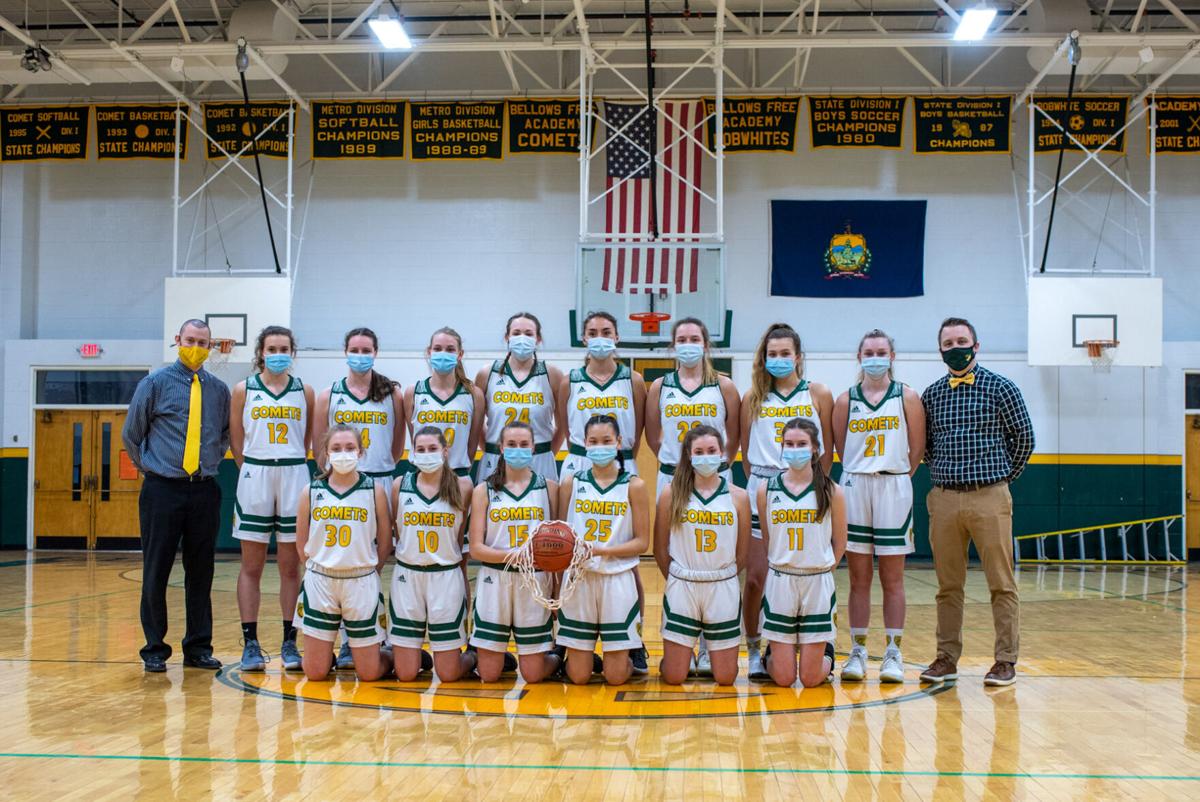 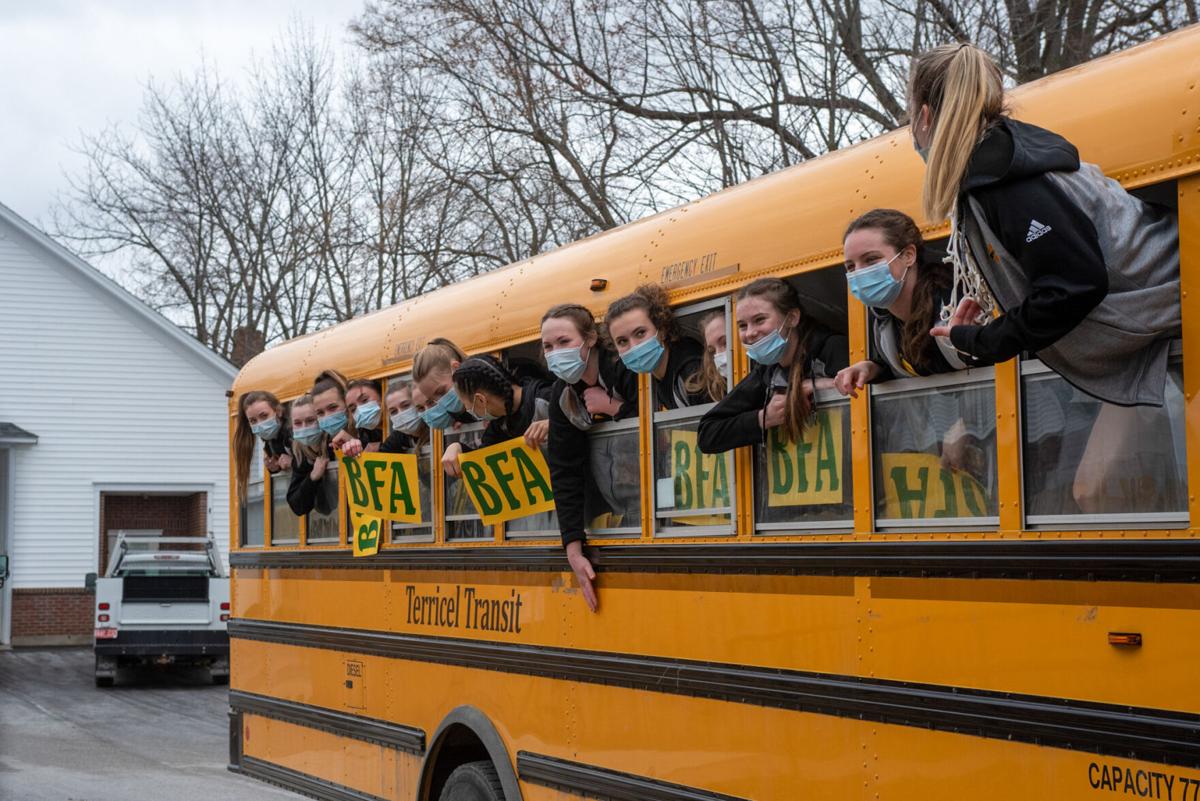 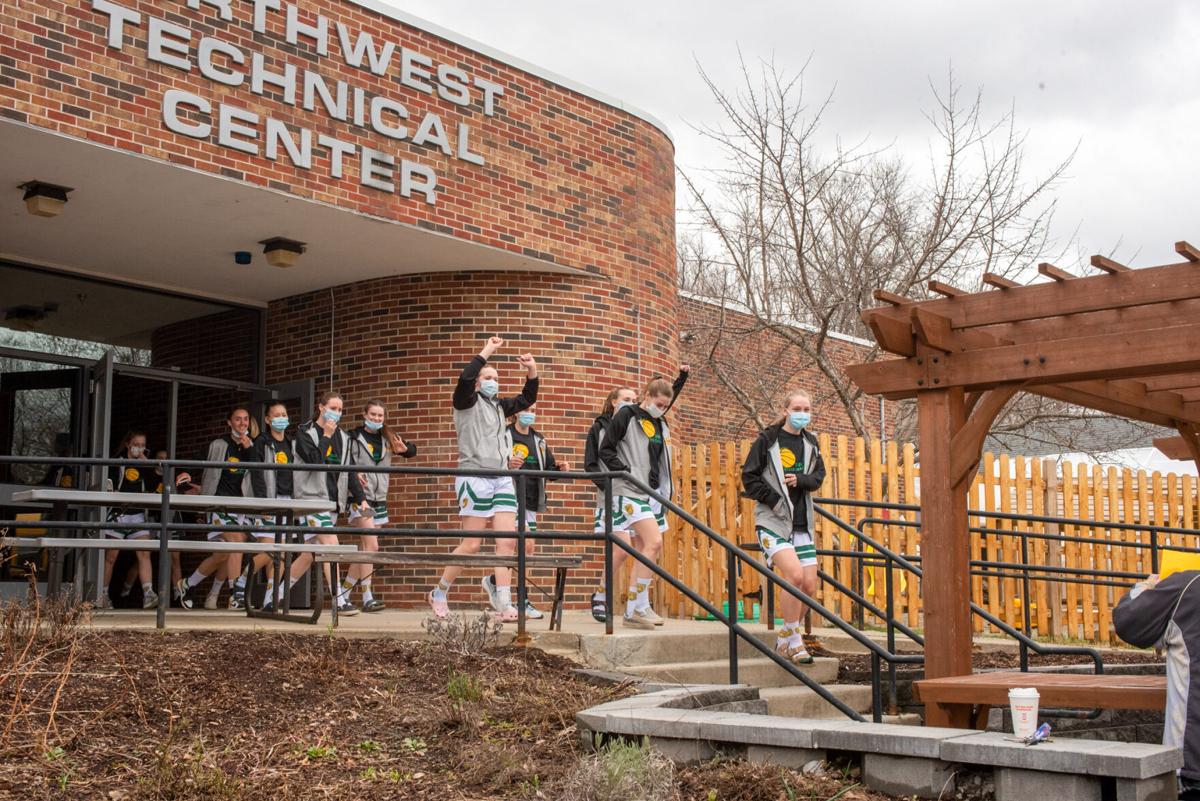 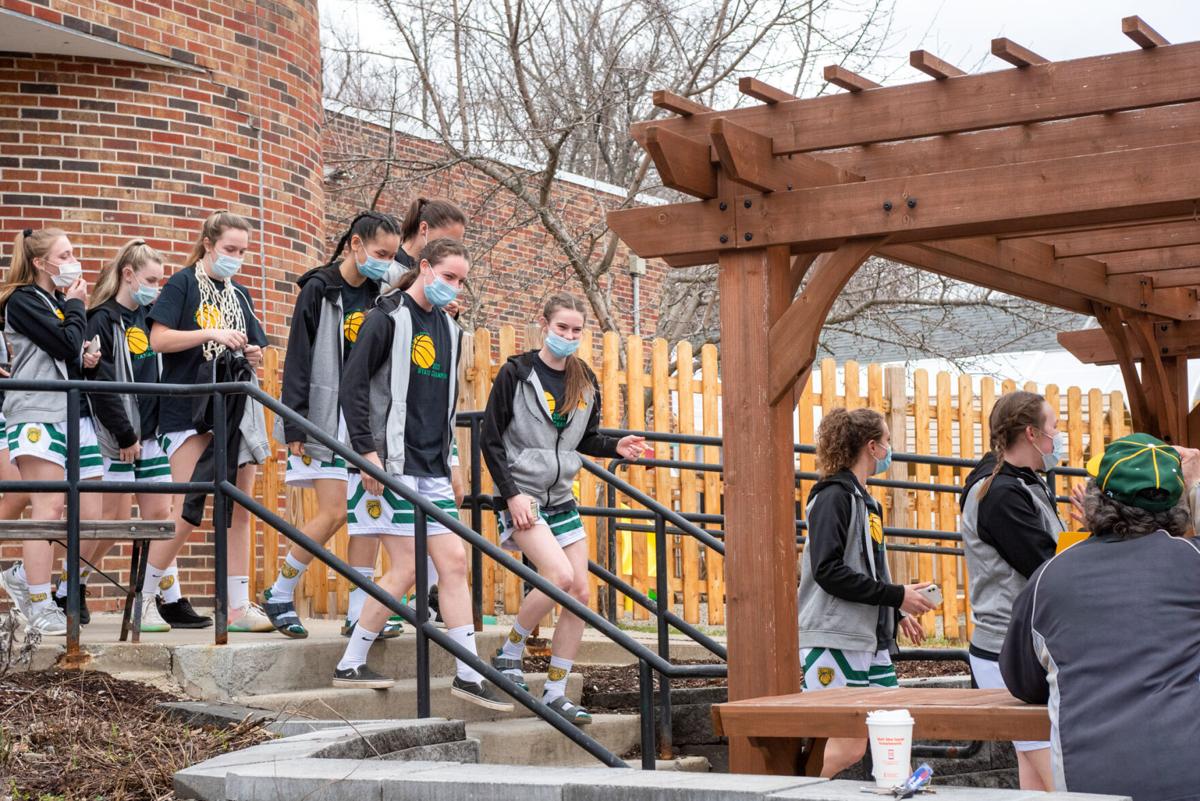 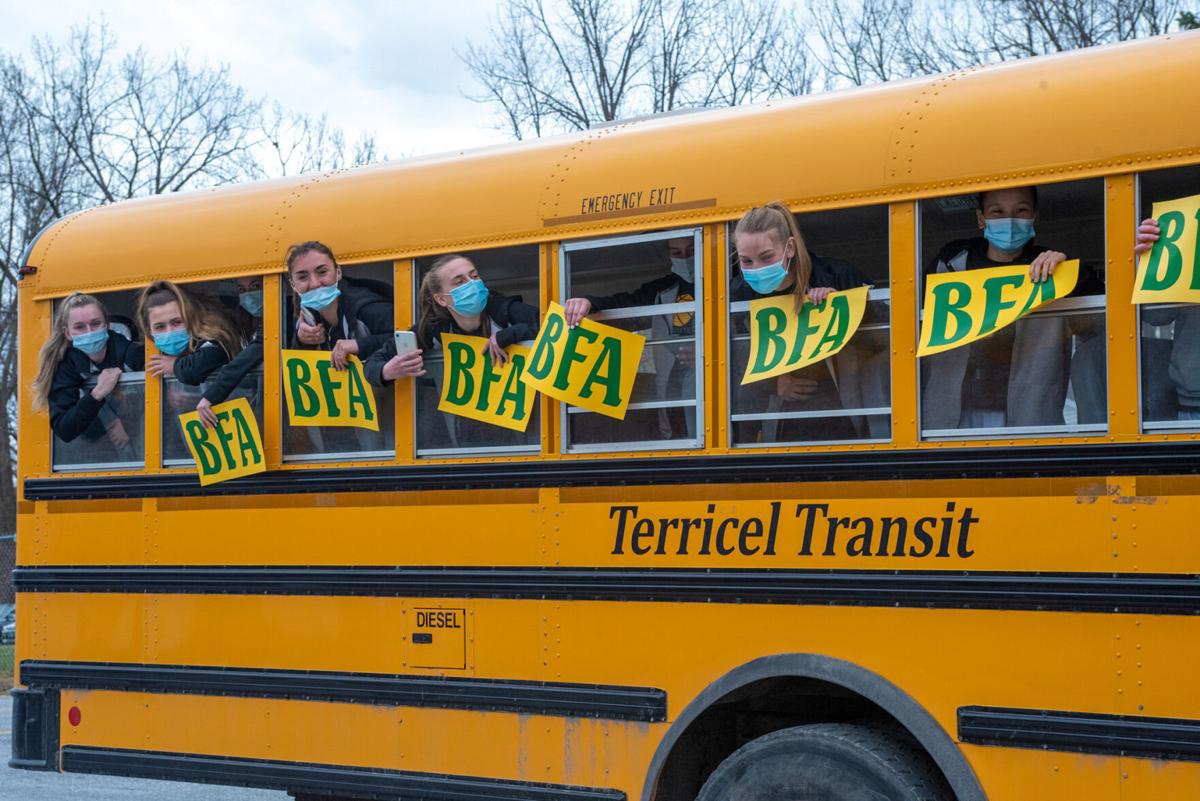 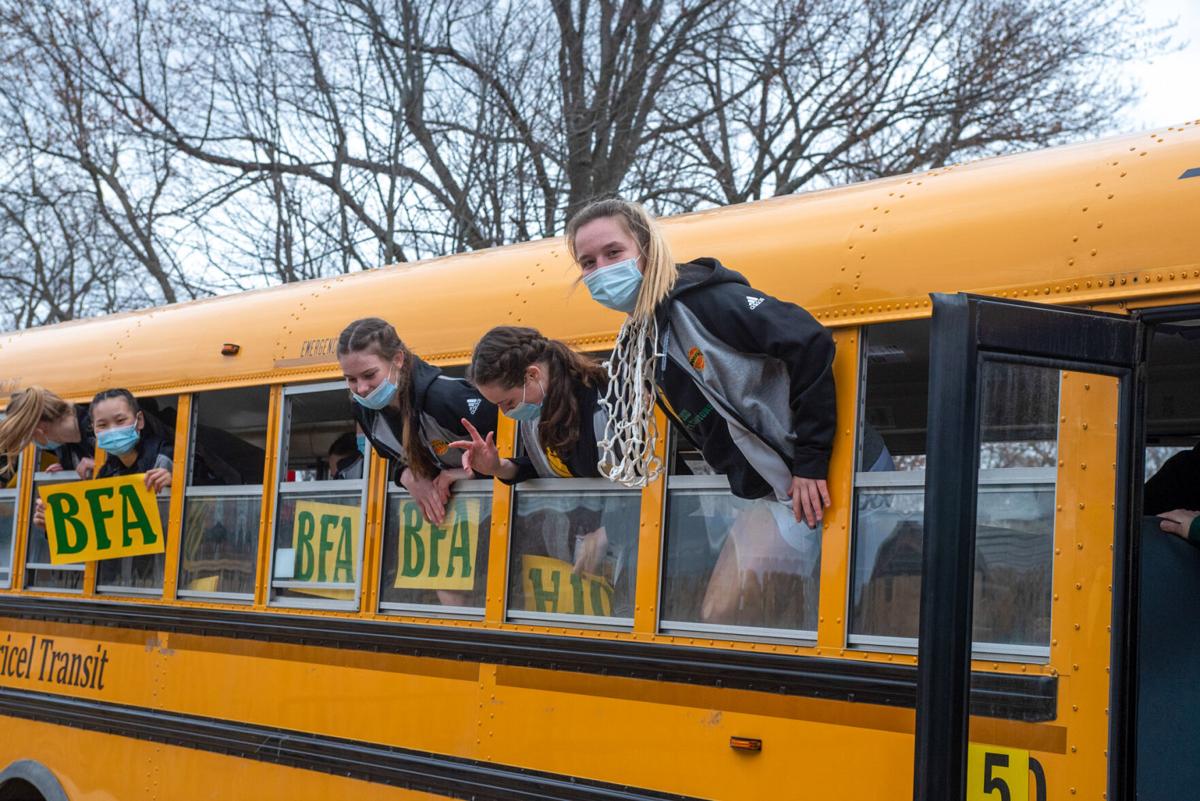 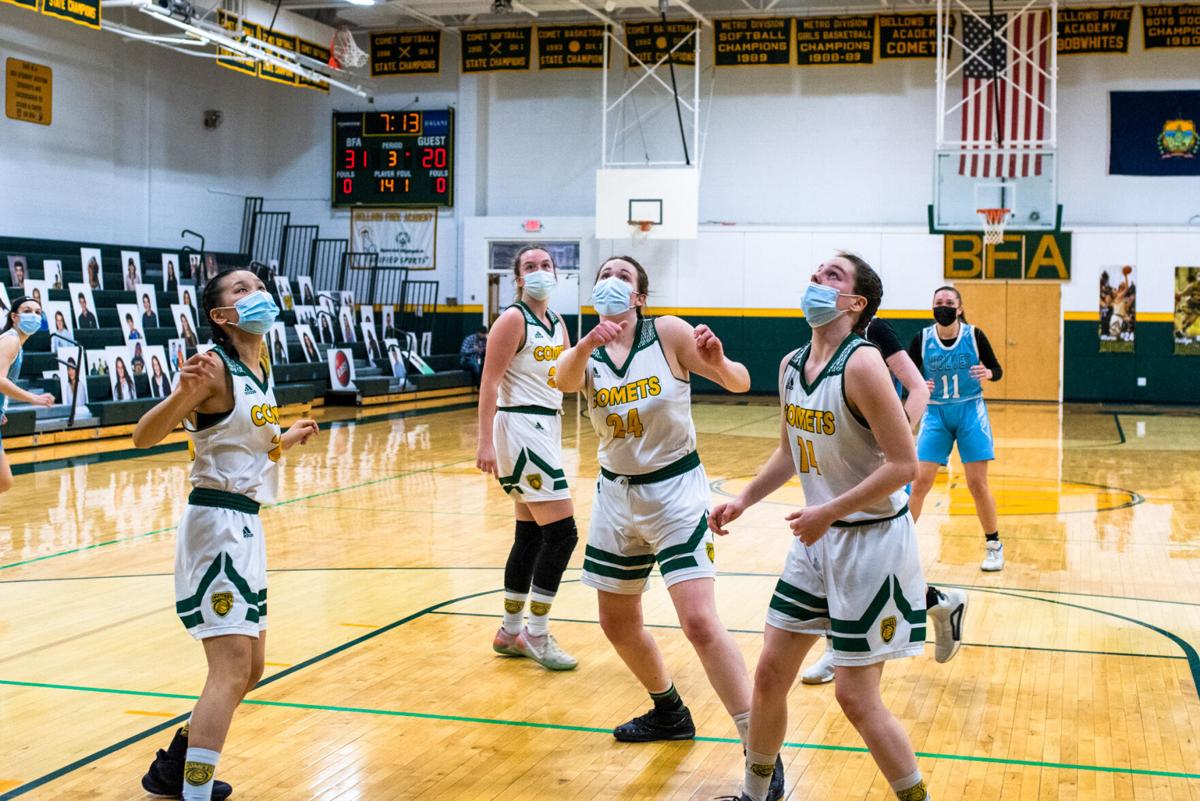 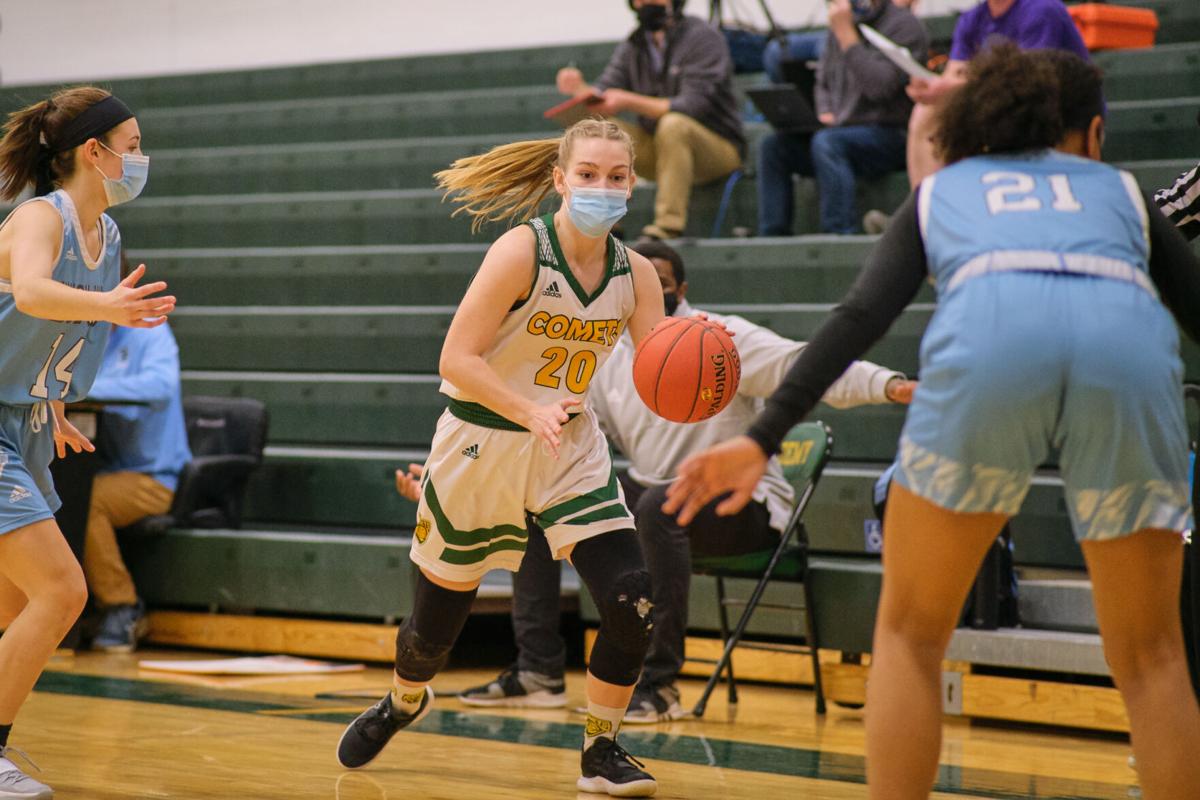 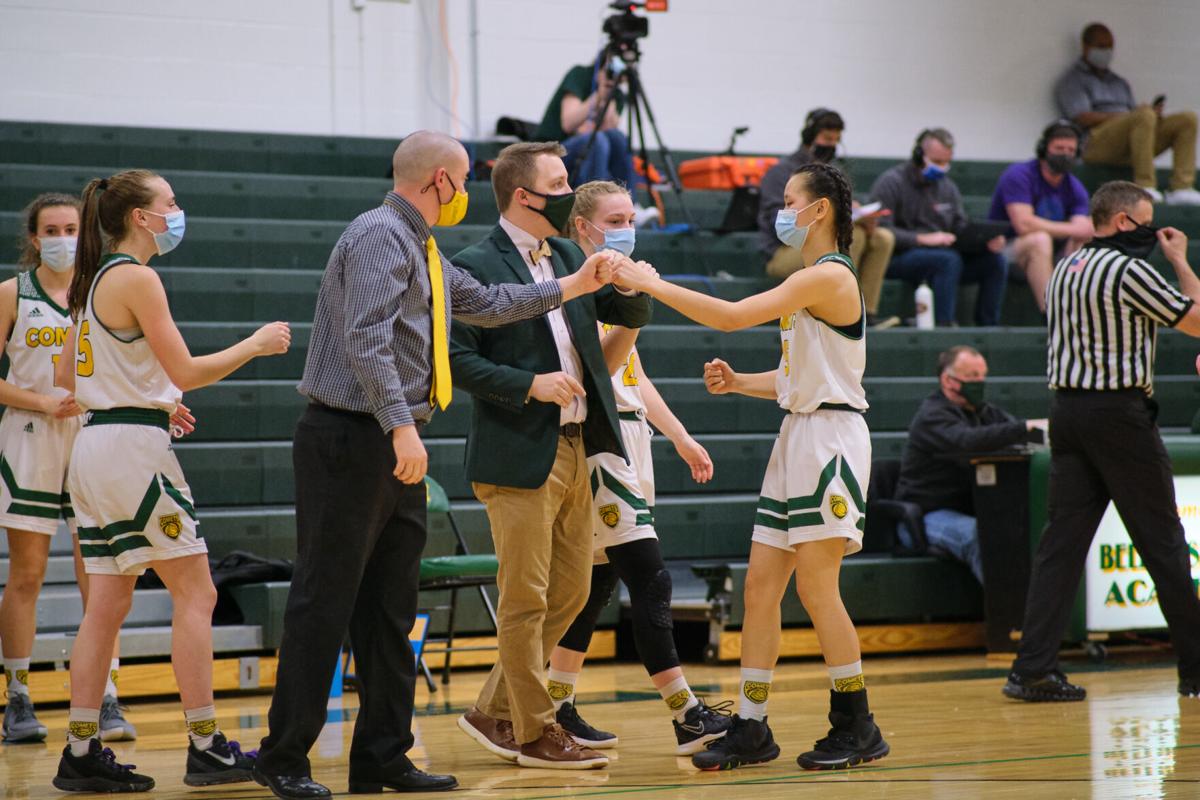 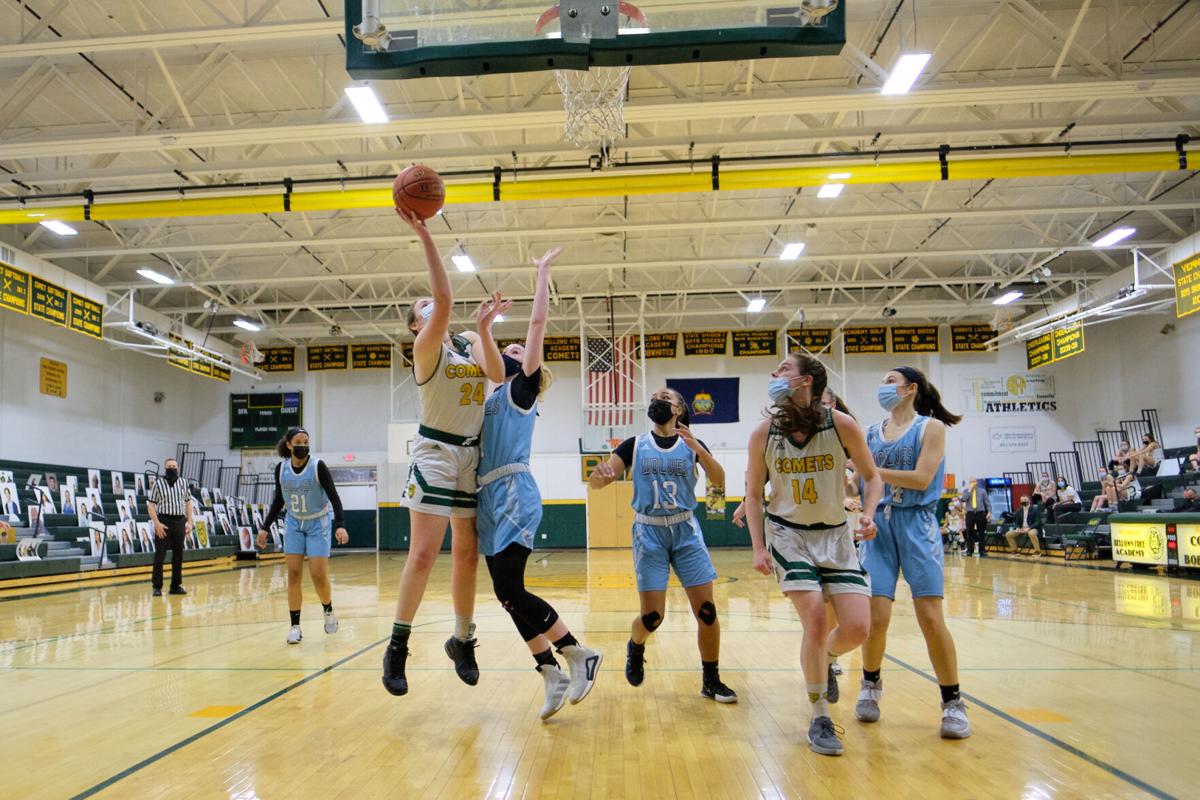 ST. ALBANS — COVID-19 may have taken many things from communities, but Saturday’s celebration of the 2021 girls basketball state title at BFA St. Albans was a perfect example of what hasn’t been taken: community.

The Comets loaded on a bus and enjoyed a parade through downtown St. Albans and around Taylor Park, complete with fire trucks, police cars and decorated vehicles.

This year’s Comets didn’t get to go to Barre to play their final game after Rice was forced to forfeit due to COVID-19 concerns.

A caring community member, Bryan Deslauriers, who was a three-sport athlete at BFA St. Albans, reached out to a teacher to suggest a parade.

The parade was quickly organized, and on Saturday afternoon, the community, the athletes and their families had a chance to celebrate together.

Before the parade, the team met with BFA Athletic Director Dan Marlow to cut the net, with each team member receiving a piece of string as a keepsake.

After cutting the net, Marlow led the girls in an exercise referred to as a circle of positivity. Each of BFA’s five seniors went to the center of the circle and listened while their teammates spoke words of encouragement.

The circle has been around for a while, according to Marlow, and was part of Comet coach Jim Bashaw’s dedication to raising up great people.

“Jimmy and I were sitting on the bleachers after a basketball camp, and he said to me, ‘One of these days we’re going to fill this gym, not just because we’ve got good athletes but because we’ve got good people,’” said Marlow. “I told them today that Mr. Bashaw would be so proud of them. It’s all about taking care of people who are important to us, and that’s what we did today.”

Marlow noted that some kids in this year’s program had aunts and mothers who played for Bashaw.

“Anyone who played for Jimmy, they’ll relate to this. His influence still continues to impact the kids who play now,” said Marlow.

After the parade, the girls gathered for photos, interviews, and a chance to be together in the gym. Messenger Sports caught up with the Comet seniors.

Caitlyn Dasaro: "The parade shows what a great community St. Albans is. Everyone worked so hard to make things as special as they could be. It was really amazing to see it," said Dasaro.

"Even if we didn't get to play today, I think we realized we worked hard. If we could have played, we'd have given our best effort, and we feel like champions for how hard we've worked."

Dasaro shared the season with her sister Ruby, a freshman.

"When Mr. Marlow announced the parade, the look on Ruby's face--it was full of excitement! Seeing Ruby that happy made my day."

MacKenzie Moore: "We all wanted to play, but it's a good feeling to know that we brought home another banner and trophy for Comet basketball. I'm really going to miss playing with this team."

Bethany Sanders: "Friday morning when we heard we couldn't play, it didn't feel like we won, but with the parade coming together today, we're all excited, and it's resonating in our heads that we're champions," said Sanders.

"The five of us seniors have dreamed of this day since the fifth grade. We'd come to the Comets' games and say we would win someday, and it's really exciting it happened for us."

Iris Burns: "We've been playing together for seven years, and it's always been our dream to win a title. I'm really proud of all of us," said Burns.

Maren McGinn: "It's so special even though it's not as I pictured it. We've spent the last few hours having fun and getting our last words in. It's kind of sad, but it's bringing us together.

"I'm so proud of how we played. It's not easy to play in these times, but we adapted really well, and I'm proud of what we accomplished and how we did it. Looking back to my freshman year, I never thought I'd be here today. Enjoy every minute and love each other!"

Flavia Lamat was a member of the team and a French exchange student: "The girls made me feel at home and included me in the joy of their victory. I enjoyed the small moments when I could talk with the girls about good shots and the memories we've made."

Megan Buckley, who graduated last season, helped with TV coverage for the Comets and came to photograph and celebrate on Saturday.

“It was fun to watch them through the season. Their last game was such a great game. They played so well together!” said Buckley.

“We’ve talked a lot about how lucky we were to play, but also to play our best and go as far as we can. The team came to work every day and made the protocols easy. They never let anything slip. For all the talent we had, a lot of the season went into being as diligent as we could, and that’s just as hard as winning any game, I think,” said Baker.

Our favorite moment of the day: The Comets are all smiles as they prepare for championship parade!

The Comet basketball team was treated to a wonderful State Championship parade on Saturday! We live in such a great place, don't we? People he…