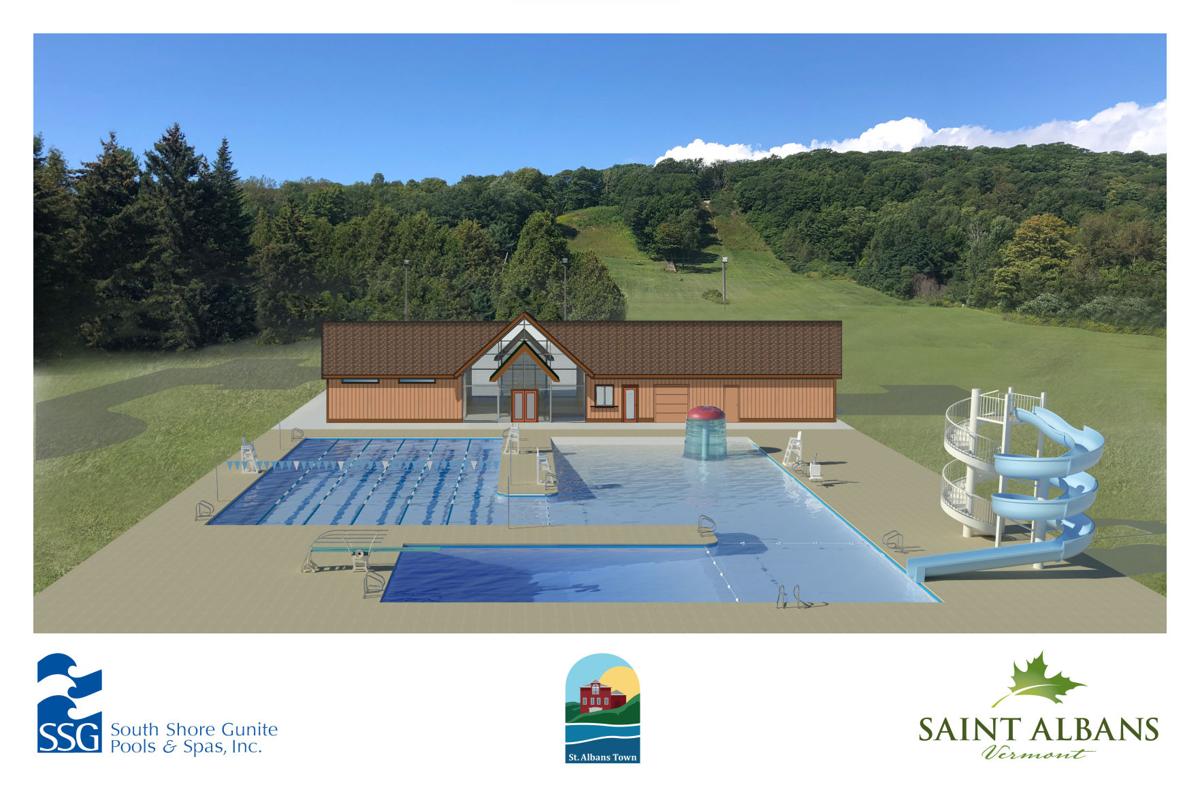 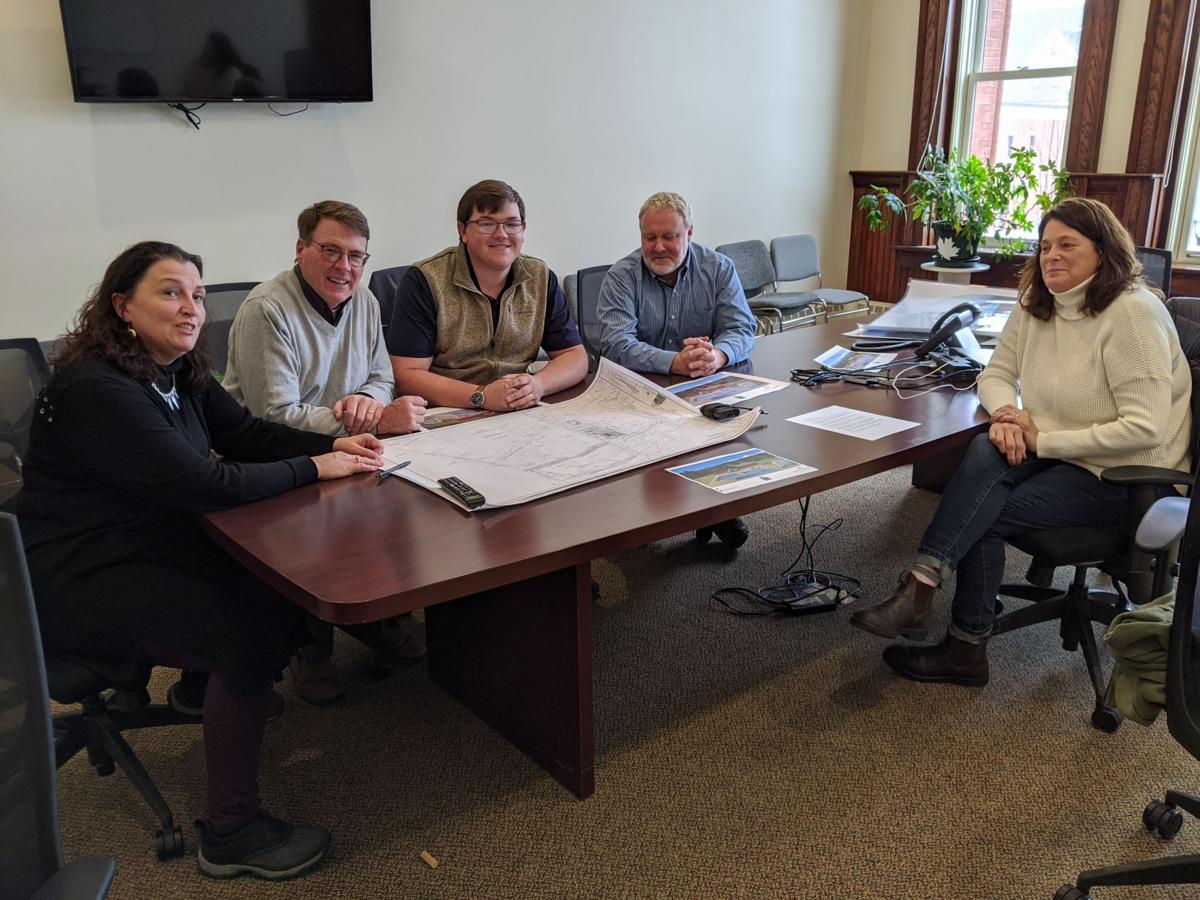 The pool would be open year-round, sheltered by a 130-by-114-foot inflatable dome in the colder months.

The city and the town would split the project’s cost 50-50, with each government respectively owning half of the final product.

City and town officials spoke with the Messenger about the proposal Tuesday afternoon.

They highlighted the pool’s recreational benefit not just for children but for senior citizens as well.

Toward that end, the proposal includes a public transit bus, tentatively dubbed the “Aqua Van,” transporting residents across the community to the pool to take the transportation burden off its potential users.

Town and city voters will decide on the proposal next Town Meeting Day.

If it passes, officials said the pool will be open to the public by 2021.

“None of those really were palatable,” Cloud said.

“Pretty quickly it became a no-brainer that, if we’re going to put what looks like it’s going to be north of five million into a site, it ought to be a site that has room to grow, that is on land that we own and that has some synergy with other recreational uses,” Cloud explained.

“So Hard’ack pretty quickly rose to the top of the list.”

Cloud said at that point the project became an opportunity for the town and city governments to work together.

He said the consensus between those governments was that this proposal “checked a lot of boxes.

“It spoke to all the generations. It’s not just a kid thing, it’s not just a family thing, but it’s really everybody in-between.”

Kelly Viens heads the city’s recreation department. She said the rec department has “a lot of different customers” when it comes to current pool usage alone.

“Right now we jam it into eight weeks, or ten weeks, if we’re lucky,” Viens said.

Viens said she hears swim team members move on to Chittenden County for continued pool use in the colder months. This new pool, with its year-round access, could keep them in Franklin County.

And she said the rec department is already imagining year-round senior programming.

Viens said seniors “can come, they can take a fitness program or they can swim laps and then come out, have a coffee and chat with their friends” in the pool house.

“I think that socialization piece of it for the seniors is really big, too.”

Cloud pointed out a zero entry area in the pool design in which parents can take the youngest children.

He said, “You go down to the current pool, what you see is a lot of parents holding their young kids ... they can’t put them down because it’s too deep. People learn to swim in shallow water, not deep water.”

“That’s another huge issue we run into at the pool now,” Viens said. “We have the moms with the little babies, we have the middle school boys doing cannonballs, we have everybody ... they’re all on top of each other.”

So there’s that zero entry area for the youngest kids. More experienced swimmers can take advantage of the general pool area, a “dolphin” fountain area, or an approximately 10-foot-tall slide.

The new pool, as designed, is about 20,000 gallons larger than the current pool, according to Viens, which she said translates to a new pool area of about 15 feet.

The project also opens opportunities for site work around the Hard’ack property, for example moving the road into the recreation area away from Congress Street’s intersection with Vermont Route 104 and extending the sidewalk from the top of Congress Street to a newly created recreation path.

A new parking lot would separate the swimming pool from the Greg Brown Lodge, which is already under construction.

St. Albans City Mayor Tim Smith said he feels the time is right for the city and town and to cooperate on projects like this.

“I think people want it,” Smith said. “ ... And I think this would be a big step for working toward a number of projects.”

Smith pointed out the estimated lifespan of the current pool was 25 years. It’s 40 years old next season.

As for Hard’ack, “It’s sort of our ‘Field of Dreams,’ if you will. I mean when you see all those cars coming down the interstate ... the goodwill you get out of that is endless.

“It’s that way when the lights are on and people are skiing. People see that ... I think we’re fortunate to have the ski area that we do.”

But he said it’s a “good project.”

“We’ve tried to shift the town’s philosophy from ... the town as a business to what does a town do for its residents, and what does that cost, and what quality of life do our residents have,” Deso said. “And we think this could play into that discussion pretty heavily.

“We’re right there. We’re ready to be partners.”

Deso said the estimated debt service on the project as proposed is annually about $170,000-$190,000, or about two cents on the town’s grand list.

That translates to an additional $70 in municipal taxes per house assessed at $350,000.

Johnson said any resident who wants to individually talk to selectpersons can contact her, c.johnson@stalbanstown.com.

Town sounds off on community pool

ST. ALBANS TOWN – A joint proposal from St. Albans Town and St. Albans City to build a new municipal pool at the base of the Hard’ack Recreati…