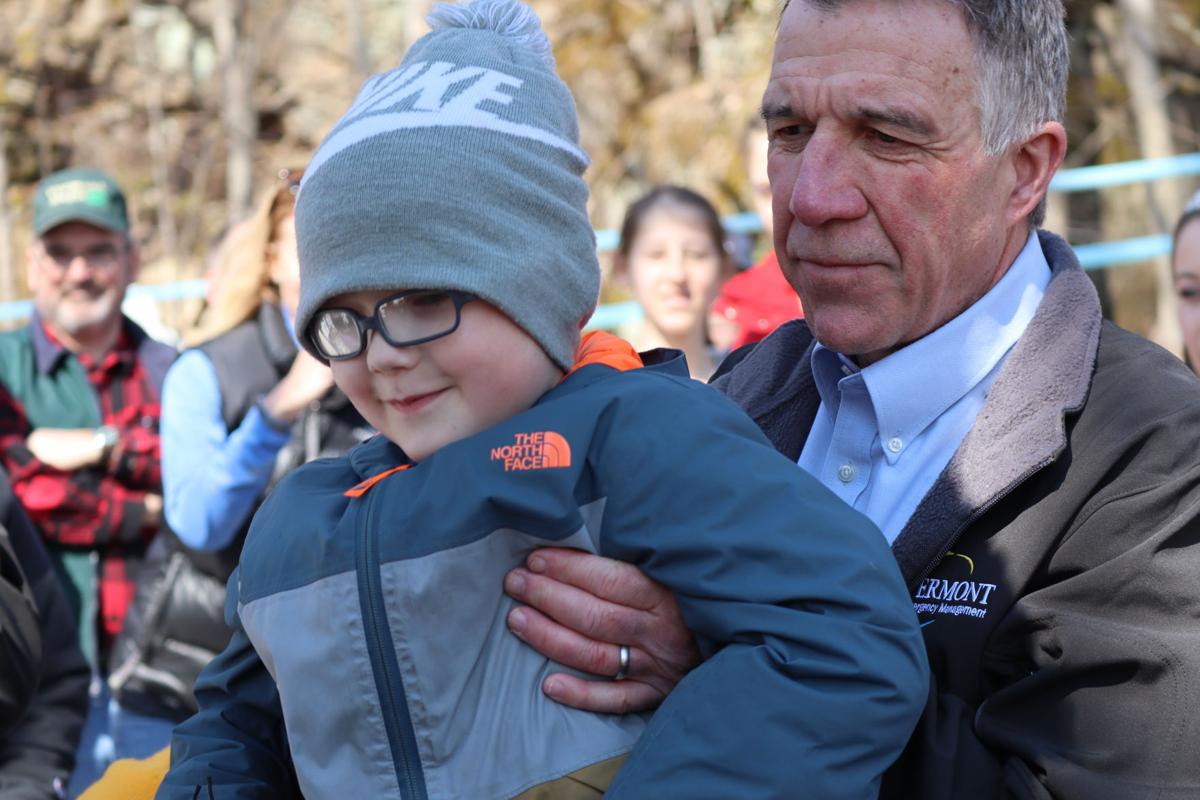 Gov. Phil Scott helps a young Highgate resident see the sap flowing into a bucket after tapping a maple at Gagne Farm on Monday. 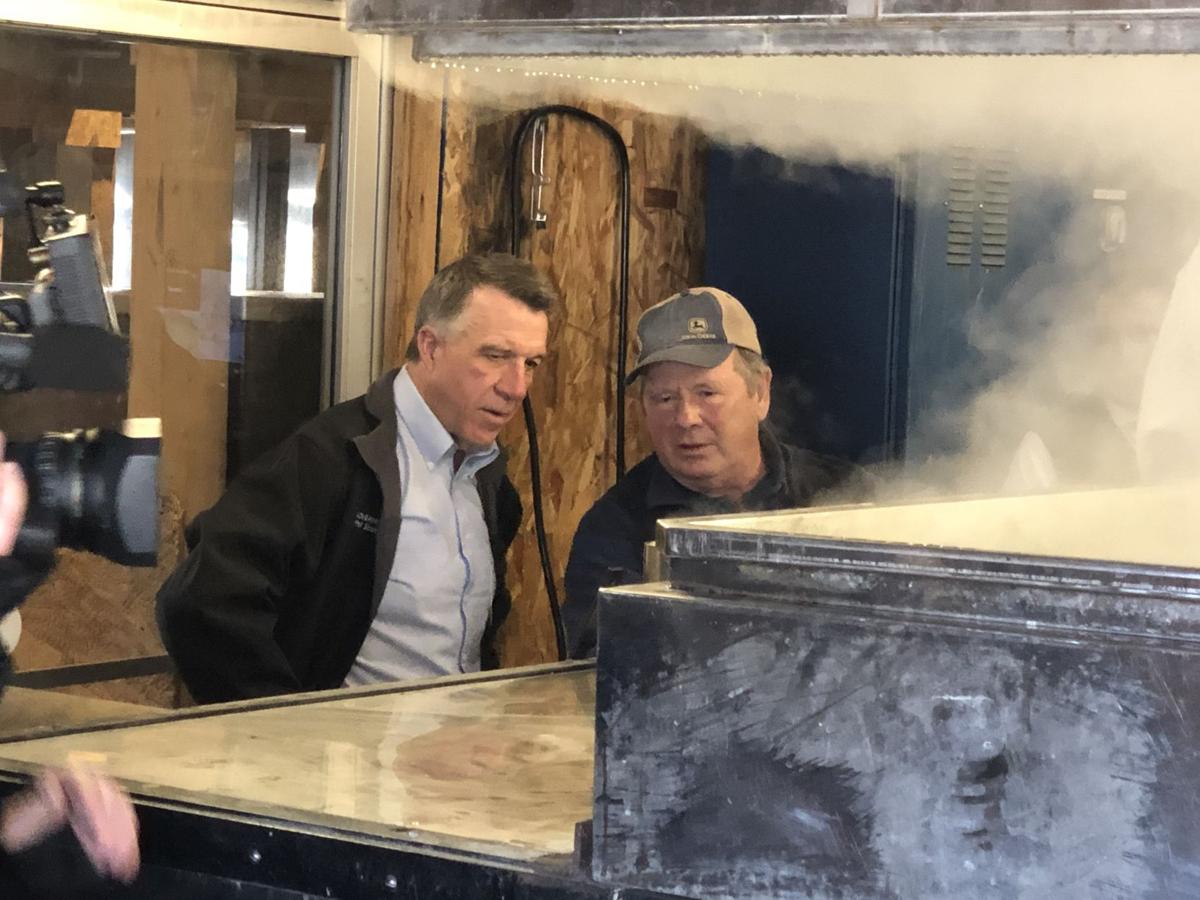 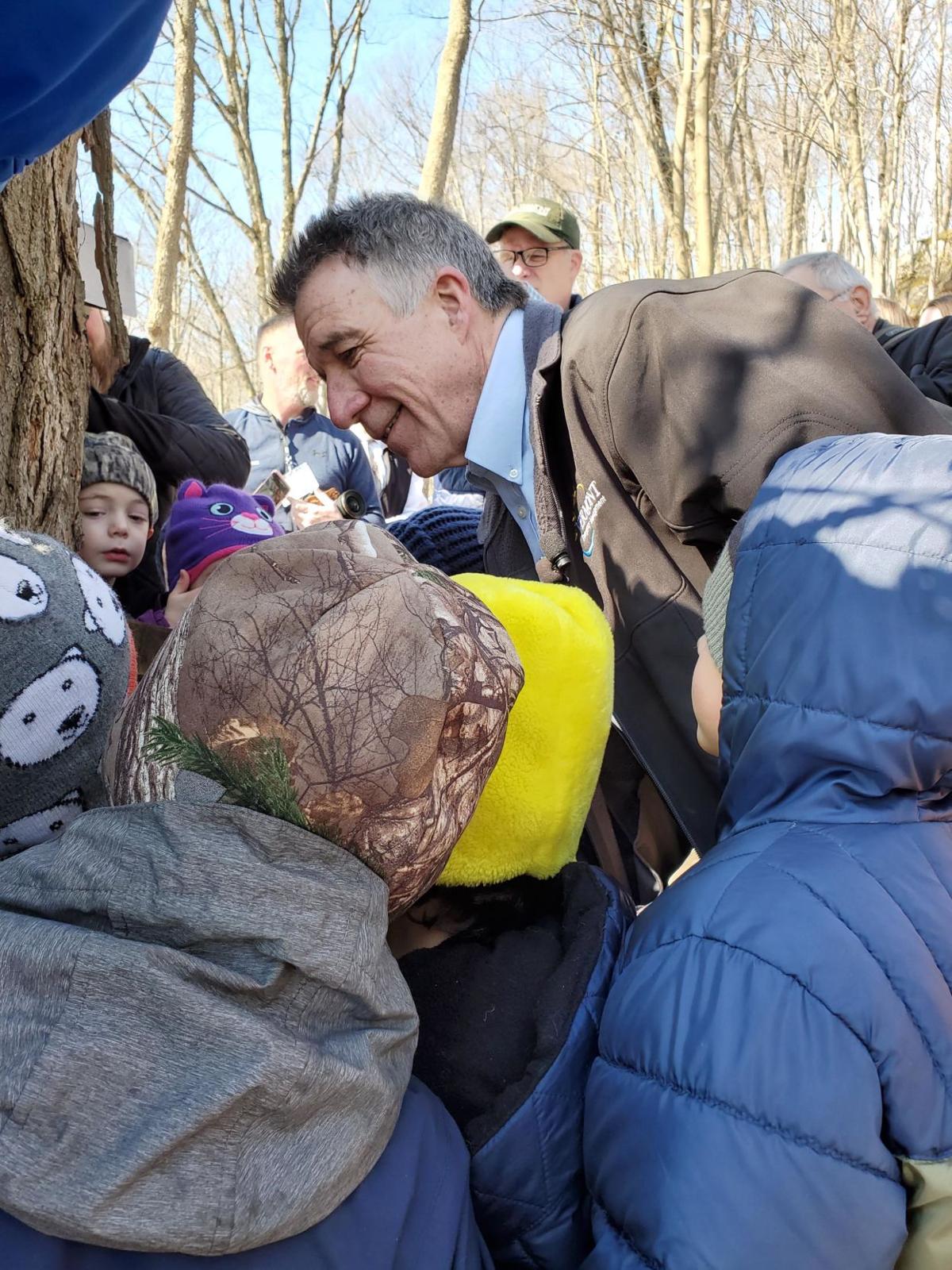 Gov. Phil Scott taps a tree at Gagne Maple with a little assistance. 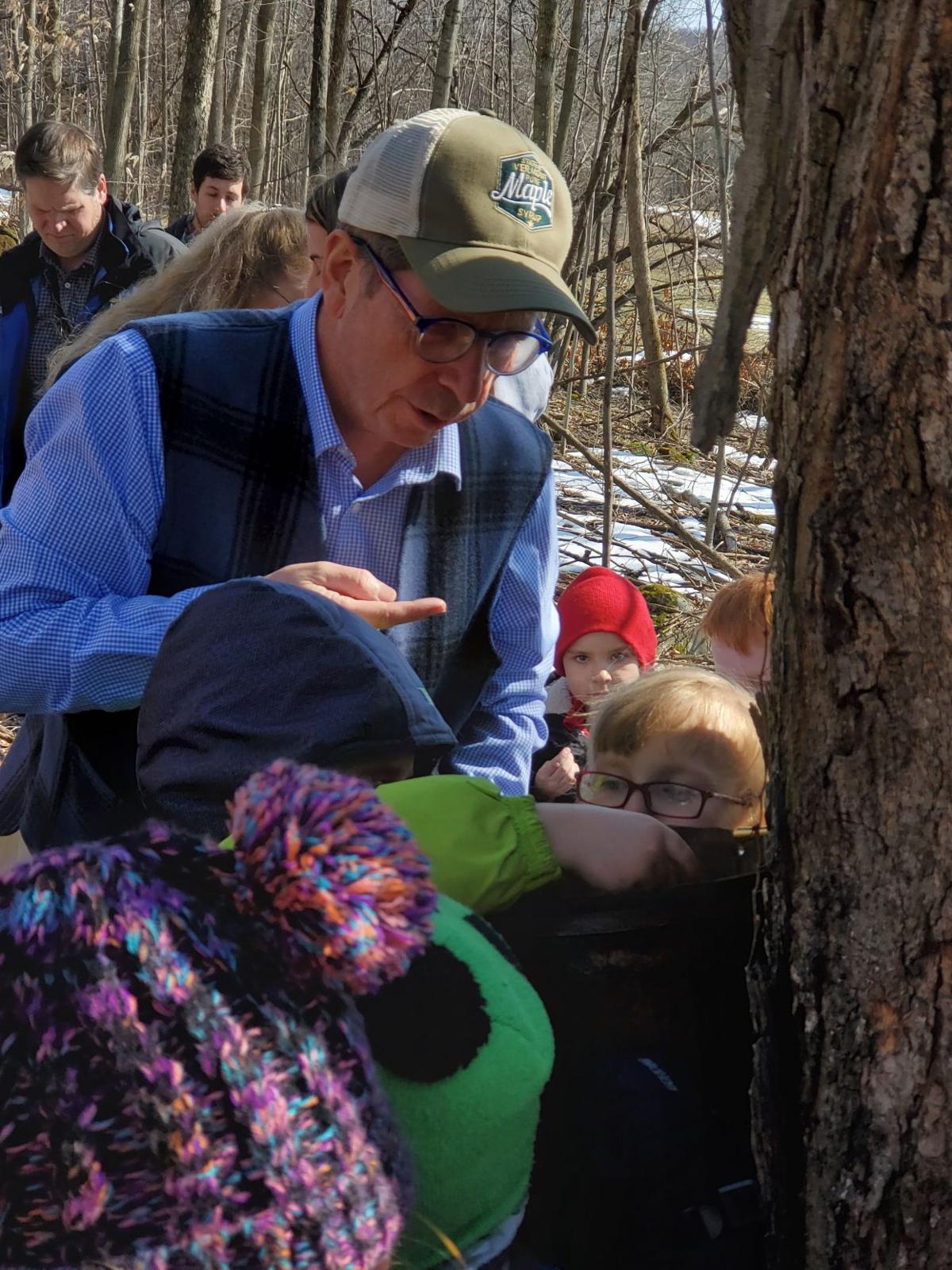 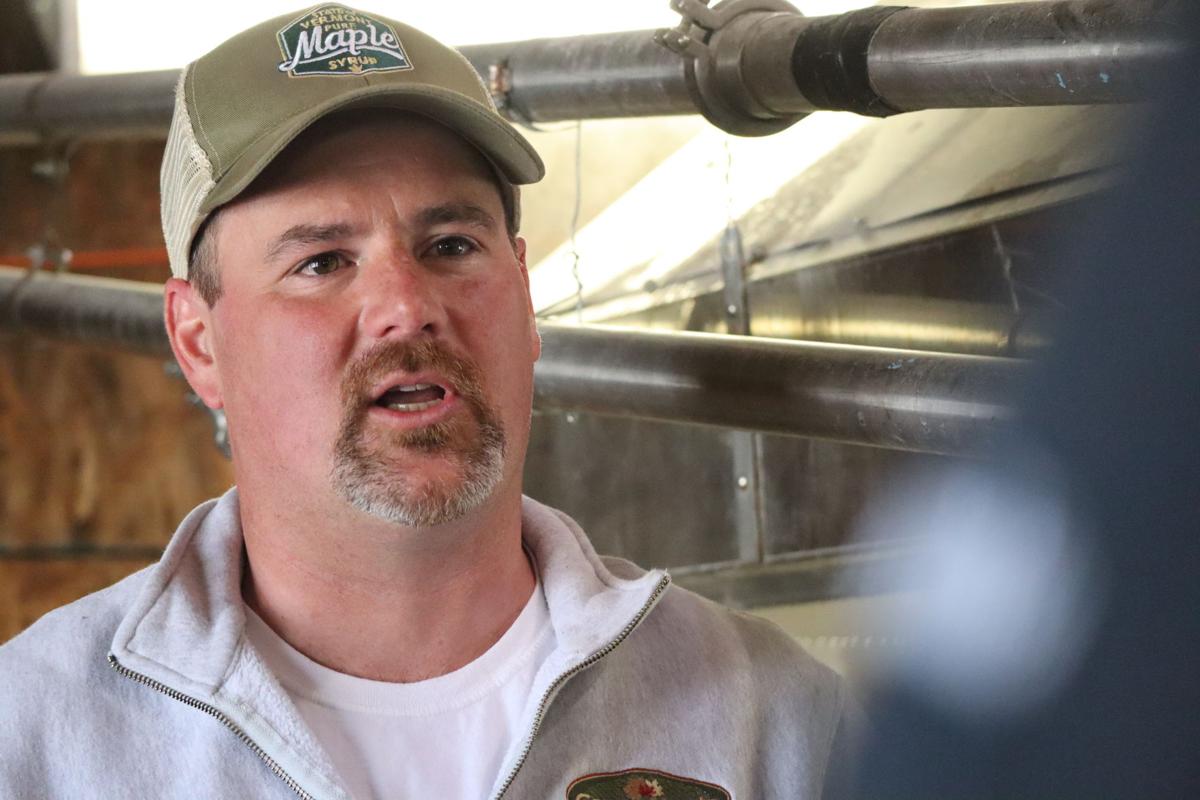 HIGHGATE – Under a sunny sky and unusually warm morning, a mixed crowd gathered at Gagne Maple to celebrate the Vermont Maple Season and Maple Industry, culminating in the tapping of a maple tree by Governor Phil Scott, under the watchful eyes of local school children.

Celebrations began in the sugar house, a perfect place to discuss the importance of the maple, as industry and livelihood. Patriarch Ferdinand Gagne explained some of the evaporation process to the attendees, as steam and smoke rose.

“Vermont maple is second to none, and we wouldn’t have the best in the world if it wasn’t for hard working families and sugar makers like the Gagne’s,” said Scott. “With Vermont’s leadership and example, maple continues to be a valuable agricultural product and an important part of Vermont’s economy and brand.”

As the sap continued to boil, the Governor and entourage were taken into the sugarbush for preparations to tap the maple tree, which stood proudly to one side of the walking path. Trailing behind him were the kindergartners from Highgate Elementary School, who were shown different trees at stops along the way. Energetically stomping the trail mixed of mud and melting snow, the kids were anxious to see what was ahead.

“We’re often under the assumption that kids around the area know about sugaring, but this is a great way to educate them first-hand about the tap-to-syrup process,” said Patrick Hartnett, Principal at Highgate Elementary School, calling it a part of their ‘Vermonterization.’

“As it becomes a more urban society and less rural, a lot of these kids have never seen the sugaring process before. It’s a real introduction for them to be out in the sugarbush for the first time,” added Marshall Ploof, long-time school bus driver who brought the kindergartners over. “And the Gagne’s always do a great job.”

Having the Governor’s tapping ceremony locally this year made it even better, Hartnett says. “All kids should be able to visit a sugar house in their own towns.”

As Governor Scott secured the golden tap, with traditional tapping tools, it didn’t take long for the sap to start flowing, and for the kids to want to see and taste it, too. Mindful of each child, the Governor lifted several who were too short to see over the heads of their peers, so they could gaze into the sap bucket.

“Being out here with the kids, and everyone, gives a different perspective on why we do the things we do,” he said. “Seeing all the kids here makes it all worth it when we’re debating in Montpelier about policy and budgets. Then you come here, and you see why we’re doing this — we’re doing it for them. It brings it full circle.”

Before heading back to the sugarhouse for maple glazed donuts and syrup shots, the Governor spoke briefly about the COVID-19 virus. “We have to be realistic, eventually this is coming to Vermont. We have to make sure we are all washing our hands as much as we possibly can,” he said, smiling at the kids. “Try to avoid coming into to contact with others who are sick. It’s really important we have some self-responsibility, because we can prevent a lot of it from happening if we pay attention.”

Jason Gagne directed everyone back down the trail, attendees choosing to ride in ATV’s or braving the mud. “It’s just a family-run operation, another day out here doing what we love,” said Gagne, who serves on the Vermont Maple Sugar Maker’s Association Board of Directors, representing Franklin County.

When asked how Gagne Maple was chosen for this annual celebration, the Governor replied in jest, “I think the Gagne family chose me. They’re certainly important to this industry and been at it a long time, three generations are here today.”

Governor Scott credits the Gagne family with utilizing a lot of ingenuity, cleaning up the forest in the off season and using the wood that’s chipped later as fuel. “They produce a great product, a very light, very sweet syrup — the best of the best. We’re very proud of them and appreciative of them to host us here today.”

Vermont’s maple industry has led the nation in total syrup produced for decades, bringing well over $50 million dollars of revenue to the state for the past three seasons. “This industry is a vital element of our working landscape. Sugar makers like Gagne Maple produce a natural, high quality Vermont product second to none, while also supporting the Vermont economy and our rural communities,” said Secretary of Agriculture Anson Tebbetts, also in attendance.

“We can see how quickly the sap was running today,” said Scott. “As soon as I drilled into the tree, we started seeing some of the sap flowing and that’s a good sign. It means they will continue to produce,” he said, estimating that the Gagne’s are about 25% in, by way of production for the season.

“We’ve already boiled 65 barrels,” says Jason Gagne, standing in the basement pump room, which used to be large enough to store the same number of barrels for the entire season. “Now we should complete about 350-400 barrels for the season.”

The USDA census indicates that the Vermont Maple industry employs over 4,000 Vermonters and produces nearly half of all maple in the United States. Last year, Vermont once again led the nation in making maple syrup, producing more than two million gallons. Which means about half of the maple syrup produced in the United States is made in the Green Mountains.

“We’re very proud that Vermont is the number-one producer in the U.S. I know some of our neighbors try and keep up, and we give them a lot of credit for trying,” said the Governor, “But, Vermont is still king when it comes to maple.”

BERKSHIRE – On Monday afternoon, students from Berkshire Elementary School (BES) gathered beneath the maples of a nearby sugar bush, emptying …