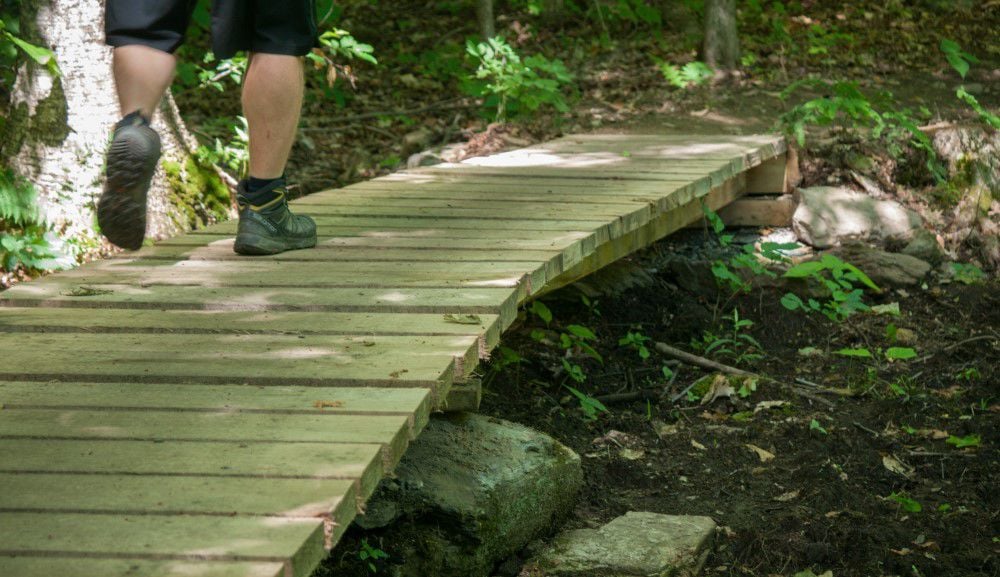 Construction has largely wrapped up on a new set of biking and hiking trails in the St. Albans Town Forest. 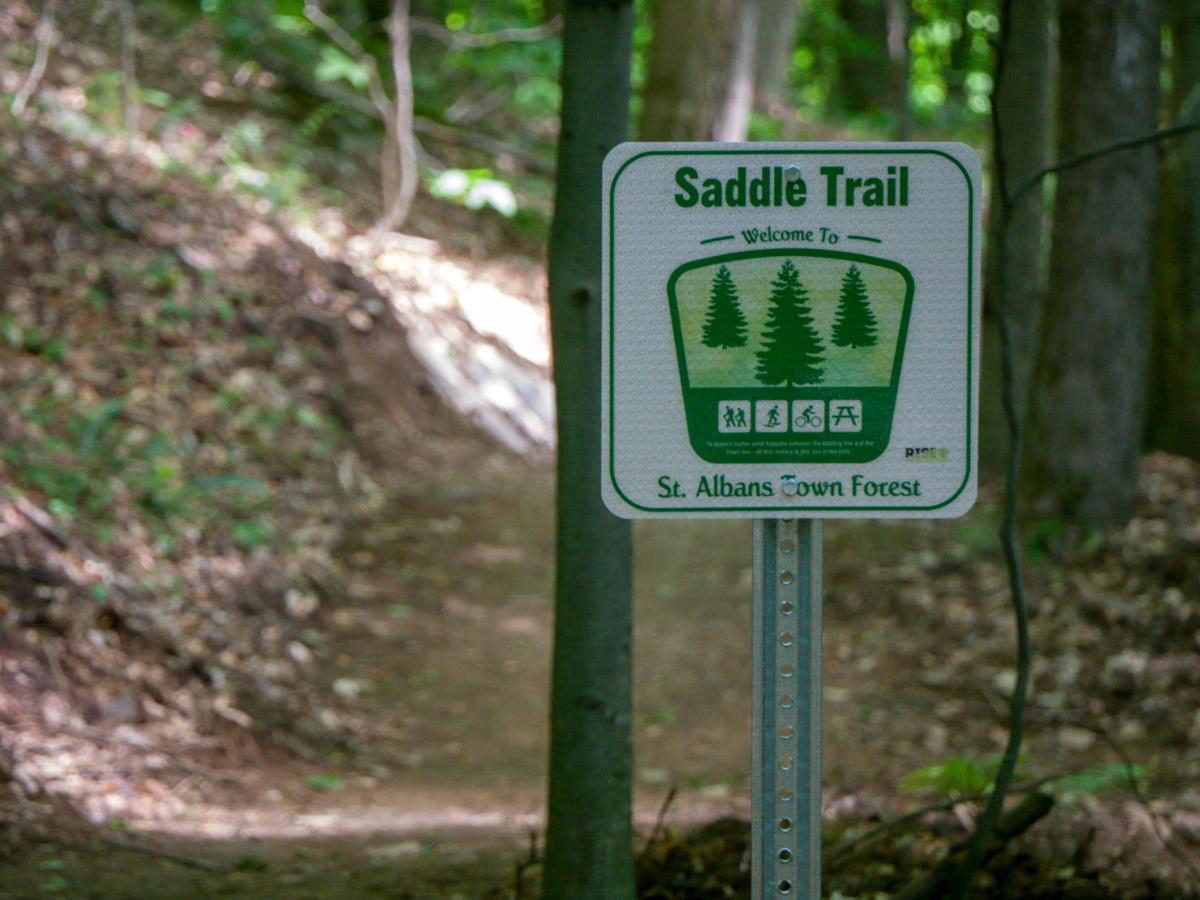 A sign marks the start of the Saddle Trail, one of several new trail loops added to the St. Albans Town Forest. 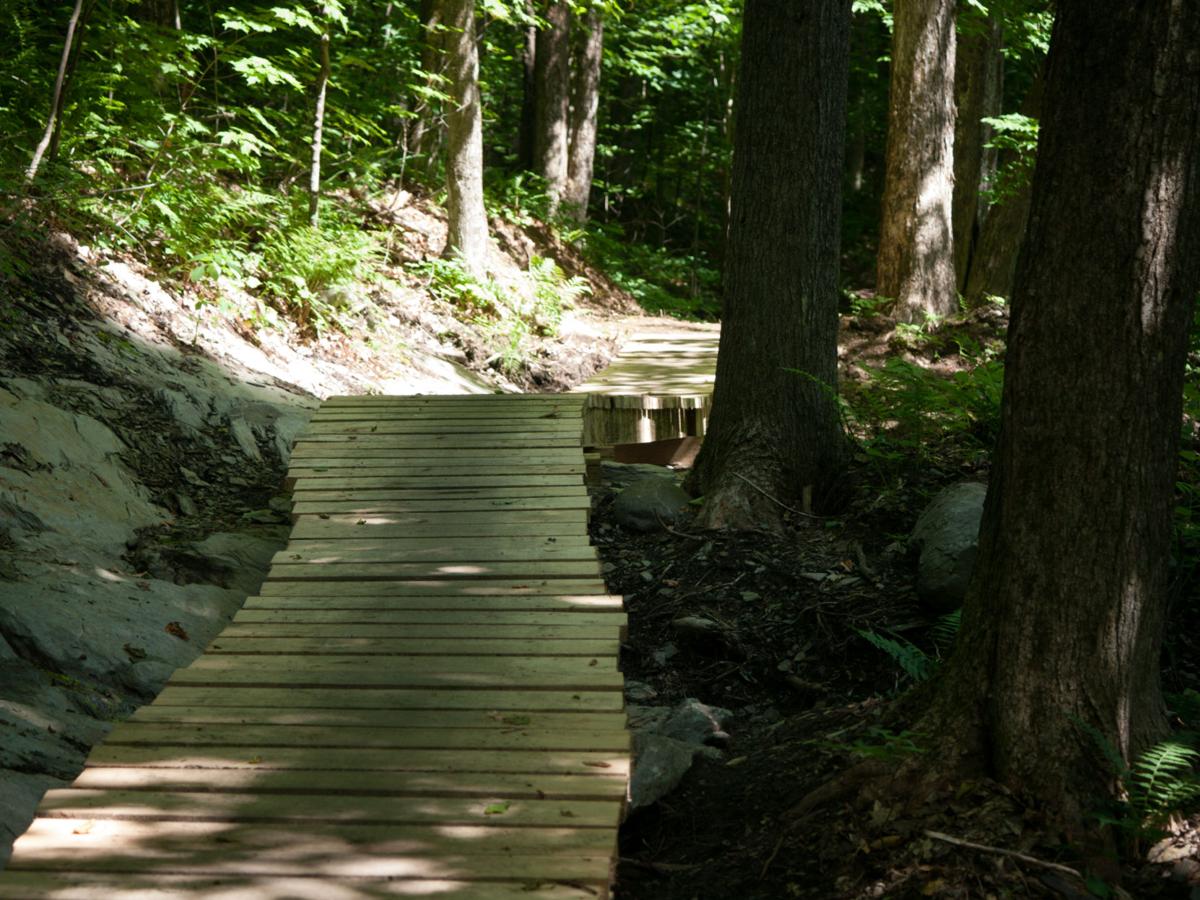 Bridges built from wood carved from oak trees that had fallen elsewhere in the St. Albans Town Forest stretch through a new leg of recently completed hiking and biking trail. 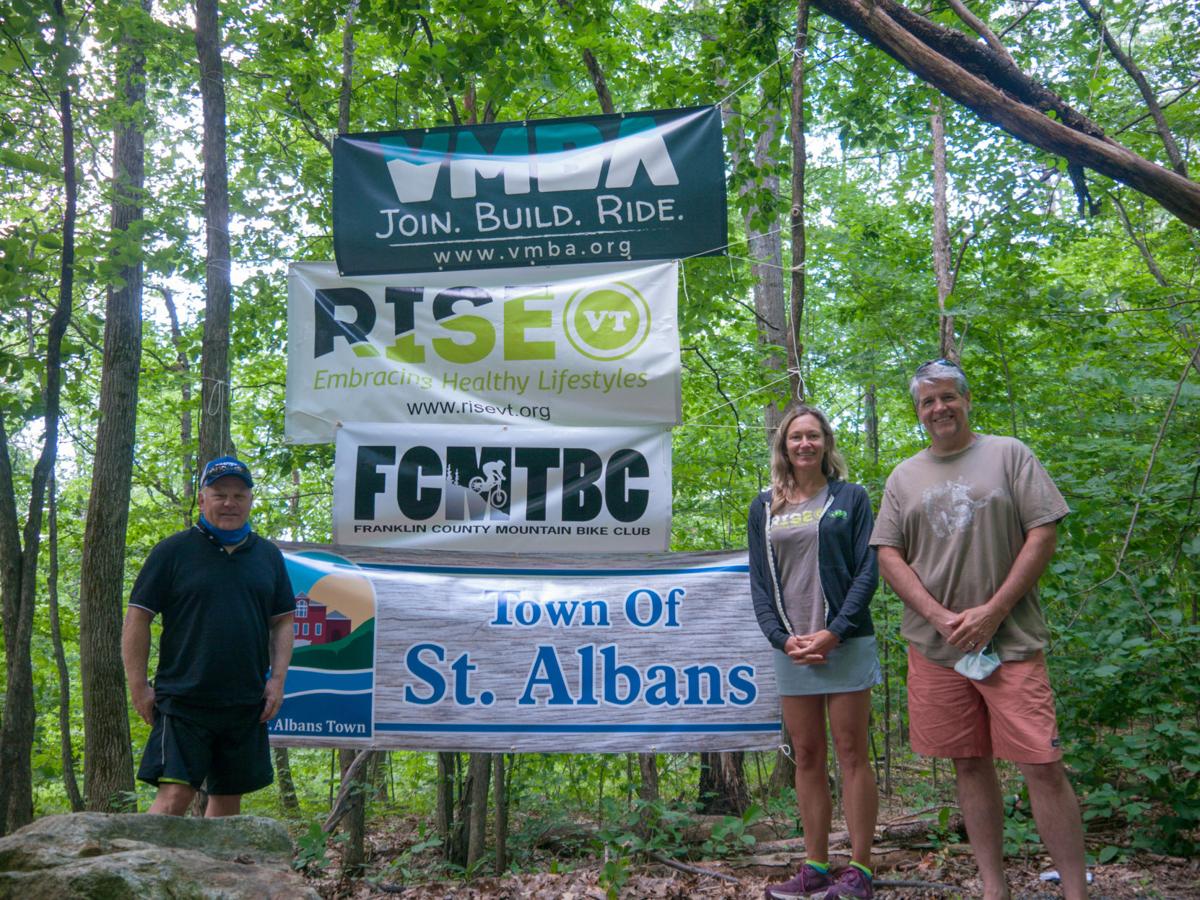 ST. ALBANS TOWN – After years of organizing and volunteer work, more than two miles of new trails – some carved for biking and others for hiking – have been strung through the St. Albans Town Forest atop French Hill.

Work on the new trails came to a quiet close this spring as volunteers from the Franklin County Mountain Bike Club (FCMBC) and engineers from the Morristown-based trail developers Sinuosity put the finishing touches on several new paths through the woods.

With the trails’ completion, more than five miles of paths are now opened up for hiking, skiing and mountain biking in the town forest, marking the end of a years-long project for the organizers who’ve pushed for more trails for more than half a decade.

“It was amazing, because so many people were involved with it,” Jessica Frost, a project manager from the public health initiative RiseVT and a member of St. Albans Town’s selectboard, said. “It took many years to put this together.”

Plans for extended trails in the St. Albans Town Forest date back to at least 2012, when a forest management plan drafted by the county’s forester Nancy Patch referenced further developing the trails for recreation and made recommendations for managing that development accordingly.

In the years following, a Sinuosity-penned report for the town imagined new trails for everyone from birders and skiers to bikers who’d be able to find intermediate-level thrills through new loops with embankments and bridges to ease the climbs and descents through the forest’s wooded hills.

With that image in mind, groups like RiseVT and the local branch of the Vermont Mountain Bike Association (VMBA) joined with town officials to eventually pool the resources needed to build those trails through the 162-acre forest.

Classes from the Northwest Technical Center and Missisquoi Valley Union High School would likewise volunteer time to the town forest’s trails, as would the FCMBC, who on at least one build day had more volunteers on hand than there was construction projects available.

“There was an amazing partnership and we really wanted to be a part of it,” Andy Crossman, the head of FCMBC’s board of directors, told the Messenger earlier this week. “I think it will be appreciated by a lot of people.”

For the town, extension of trails in the St. Albans Town Forest plays into a frequently cited goal of building up recreational amenities and walking infrastructure within the town, where it is viewed as having both public health benefits and as a means of driving more business into St. Albans Town.

A survey conducted in 2018 also confirmed additional walking paths and trails were wanted by residents in St. Albans Town, with respondents from across demographic groups largely favoring having the town continue its development of recreational opportunities in the community.

According to Frost, a RiseVT study exploring the financial impact of trails had projected tens of thousands in tax revenue and economic activity in St. Albans Town due to its development of the St. Albans Bay Park, and while the forest had pulled significantly less business into the town at the time, she said it had “big potential to draw people” into St. Albans. 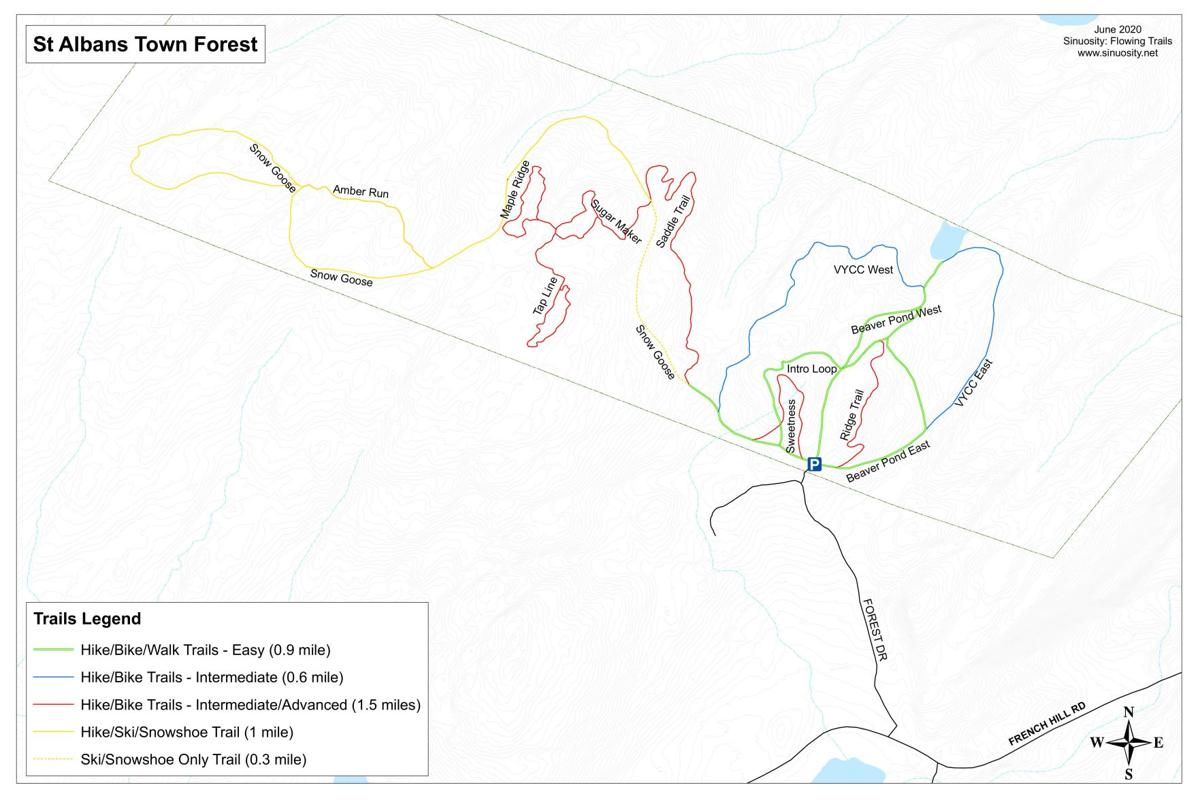 Crossman alluded to a similar theme during his conversation with the Messenger, saying it was recreation that ultimately drew him to the area almost two decades ago. “One thing that attracted me to moving here 18 years ago were the recreational resources,” he said.

The coming of COVID-19 has put plans for a grand opening on hold for the time being, though Frost said there were hopes of holding an event in the coming months to celebrate the trails’ completion with the different community members who contributed to it.

Meanwhile, the new trails themselves are wide open to the public.

During a walk through the forest Thursday, representatives from RiseVT and FCMBC showcased the work they’d done the months after Sinuosity formally began its construction of the trails last fall.

They highlighted the bridges built from oak trees that had fallen elsewhere in the forest and the easements built into the hills so bikes could more easily handle their downhill treks through the forest.

In one area, the trail led to a halved tree trunk leaned over a shallow gully where, according to Crossman, riders could choose to simply sidestep the trunk or pass over it like a balancing beam. (The key, he said, was simply to look straight ahead as you pass over.)

According to Crossman and FCMBC’s former head Stephen Bernard, the bike trails built into the woods ran from introductory trails to more intermediate spins through the woods.

“There’s a good mix making it challenging and fun without being frustrating,” Bernard said during Thursday’s visit to the forest. “It’s very family friendly.”

The newer trails connect to the forest’s already known paths leading to destinations like a beaver pond to the forest’s north and a stretch of bird watching-friendly forest toward the west.

When the winter comes and the hiking and mountain biking seasons cool down, the trails instead offer space for skiing and snowshoe travel with, according to Crossman, a dramatic view of Mount Mansfield to French Hill’s south.

Bernard, who had helped push for the project earlier in its inception, told the Messenger he was happy with how communal the trails’ extension had been.

“I’m happy with the fact the community came together to put this together,” he said. “They made it happen.”

The trailhead for the St. Albans Town Forest sits at the end of Forest Drive, several miles up French Hill Road in an eastern corner of St. Albans Town.

The forest remains open from 8 a.m. to dusk.