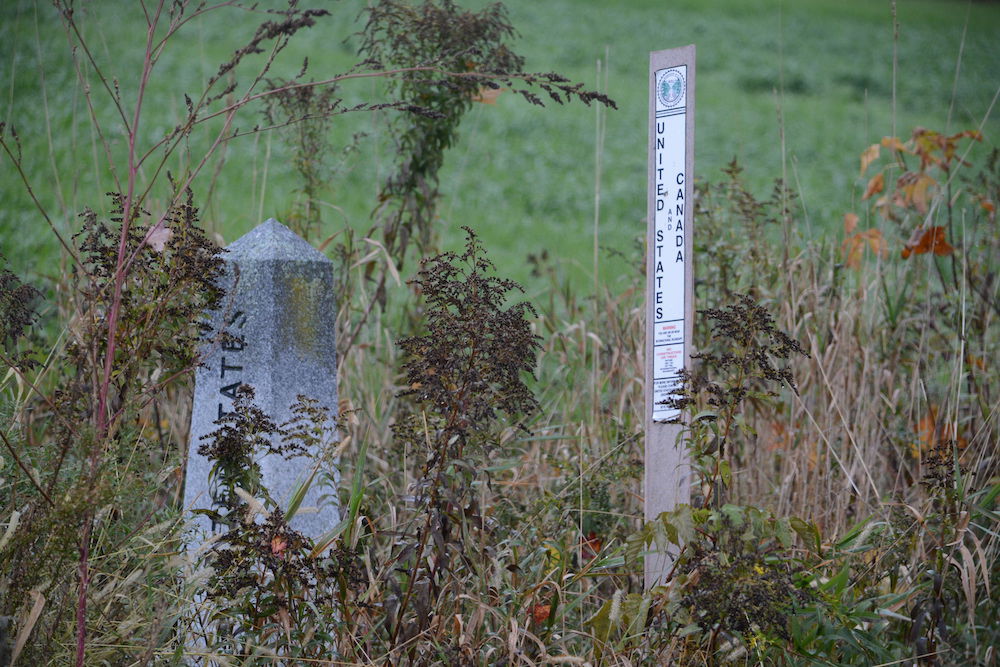 A stake marks the U.S. border with Canada in Richford.

This chart shows the amount of marijuana in pounds seized at the U.S.-Canada border with Vermont from fiscal year 2016 through fiscal year 2020.

A stake marks the U.S. border with Canada in Richford.

This chart shows the amount of marijuana in pounds seized at the U.S.-Canada border with Vermont from fiscal year 2016 through fiscal year 2020.

“Seizures have increased over the past year significantly,” said Michael McCarthy, public information officer for Customs and Border Protection (CBP). “There’s a difference between a personal use amount versus a smuggling attempt in a larger quantity for distribution.”

In December, CBP officers at Highgate Springs Port of Entry seized a shipment of over 1,400 pounds of cannabis inside a shipment of kitchen cabinets from Quebec. CBP officials say the shipment was destined for Massachusetts.

The cannabis was determined to have an estimated street value of over $3 million, and is reportedly the largest seizure by CBP officers in New England in recent years, according to CBP.

“Our team of officers remains focused on their mission throughout the ongoing travel restrictions at the border,” Eileen Bigelow, area port director for the Area Port of St. Albans said. “We know that smuggling organizations will try to exploit perceived opportunities but our officers continue to demonstrate their dedication to stopping illegal activity.”

How much and why?

Experts say that’s because Canada has legalized cannabis use and the United States hasn’t at the federal level.

Attorney partners Tim Fair and Andrew Subin, of the Vermont law firm Vermont Cannabis Solutions, said Thursday that with Canada’s legalization of cannabis in 2018 through Health Canada, overestimations of the market created a surplus that is worth more money in the United States when traded on the black market.

Vermont Cannabis Solutions opened in August 2018 to serve the legal needs of Vermont’s cannabis industry, for both hemp and CBD, and the upcoming legal adult-use industry.

Fair and Subin said as long as cannabis is federally recognized as a Schedule I substance in the U.S., there will always be higher value in black market trading than there will be in legally trading through the health platform Health Canada, which regulates all of Canada’s dispensation of cannabis in that country.

Additionally, there is higher demand in the United States than in Canada because of the sheer difference in population: 328.2 million in the states versus Canada’s 37.5 million residents in Canada.

Vermont has legalized the use of recreational and medical cannabis, and lawmakers late last year approved opt-in, town-wide tax and regulate law. But as the Canadian border is patrolled by federal officers, federal law mandates all cannabis as a Schedule I substance.

Given the small population of Vermont, a mere 628,989 people, Fair and Subin wager that an amount like $3 million in cannabis is probably not staying in the Green Mountain State. They say higher usage and denser populations in states like New York and New Jersey create higher demand and better sales for black market cannabis, which may be where the green is going.

But it’s not only from the north: CBP also reported that earlier this week, RGV agents at Texas’s border recovered over $307,000 worth of marijuana from two sets of suspects, with one recovery weighing in at 108 pounds and the other at 276 pounds.

What if it were legal?

The Democratic staff on the Senate Joint Economic Committee reported in December 2018 that the legal marijuana industry in the U.S. totaled more than $8 billion in sales in 2017, with sales estimated to reach $11 billion that year and $23 billion by 2022. There were more than 9,000 active licenses for cannabis businesses in the U.S. in 2017, with the industry employing more than 120,000 people.

According to the report, Section 280E of the federal tax code prohibits businesses from deducting ordinary business expenses associated with the “trafficking” of all Schedule I substances, which prohibits cannabis companies who are in compliance with state law from accessing the same tax deductions that other small businesses are afforded, which punishes cannabis vendors with a tax rate more than twice as high as businesses not selling cannabis.

“This crushing tax burden incentivizes legal cannabis businesses to remain on the black market and engage in tax evasion, while punishing businesses that stay within the law,” the report said.

Additionally, cannabis vendors and financial institutions are forbidden from cooperating on loan opportunities, which hinders businesses from gathering enough capital to survive and grow their businesses.

“Start-up costs for opening and operating a small dispensary typically range between $250,000 and $750,000,” the report stated.

As a result, business owners selling cannabis rely on individual investors or themselves, which in turn create “both racial and wealth inequalities in the cannabis industry, disproportionately benefiting individually wealthy business owners.”