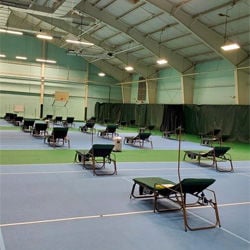 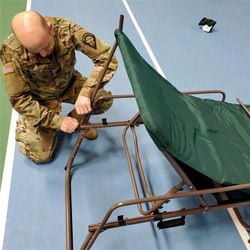 A soldier of the Vermont National Guard preparing a contingency medical center in the instance of a medical surge during the COVID-19 pandemic at the Collins Perley Sports Center in St. Albans.

ST. ALBANS — The Collins Perley Sports & Fitness Center became part of the response to the coronavirus pandemic on Tuesday.

Members of the National Guard were at the facility setting up beds and tables, laying the groundwork for the center to be used as medical surge site. Three sites are planned initially. The Barre Municipal Auditorium and the Gutterson Fieldhouse also being turned into surge sites to potentially care for coronavirus patients with less intensive medical needs who can be safely moved from a hospital.

The sites are being set up as the number of deaths from COVID-19, the disease caused by the novel coronavirus, increased again, rising to seven Tuesday. Ninety-five Vermonters have now tested positive for the illness. Testing is currently focused on those most vulnerable to the disease and priority workers, such as medical staff, meaning there are infected people who have not been tested. Some of those people will not have symptoms.

Via NMC spokesperson Katherine Laddison, Reinfurt said NMC has had a plan in place for years for an alternate care site and practiced it in case of an emergency. That site was to be the St. Albans Town Educational Center. Even though schools are closed, however, the building is still needed by the school. “Because of the importance of school lunches and e-learning we couldn’t use SATEC, so we looked for another site,” Reinfurt said.

Collins Perley was always on the list of possible sites and this weekend NMC and state officials determined the center would be one of the first alternate care sites in the state to open. Gov. Phil Scott announced that he had ordered the opening of the sites on Monday.

Based on what was happening in Italy and the western U.S., NMC wanted to be as prepared as possible, Reinfurt explained.

The site is not currently open, but the basic infrastructure is in place. The next phase of planning, Reifurt said, includes developing workflows and staffing plans.

Before moving to the site, NMC will be caring for patients in a dedicated COVID response unit. The Vermont Dept. of Health daily briefing from Monday indicated that there were two patients in that unit. Capacity will be expanded within the hospital first before moving to Collins Perley.

When the site is put into use it will start with 10 patients. Staffing will come from NMC, but the initial team will have to be supplemented shortly thereafter, Reinfurt explained.

Setting up the site was “a real team effort,” Reinfurt said. In addition to the National Guard and the Vermont Dept. of Health, Collins Perley staff and Derek Madden from SATEC provided assistance, as did the St. Albans Police Department and city and town officials. DMC Electric and Bourne Energy agreed to providing auxiliary heating should it be needed.

Additional community support may be needed once the site is open, according to Reinfurt.

This isn’t the only thing the Vermont National Guard is doing to help. In addition to the soldiers from the Quick Reaction Force who are assisting with setting up the medical surge units, 16 members of Company C, a medical unit based in Winsooki, will be providing support at the University of Vermont Medical Center. Tents have been set up outside of the center’s emergency department, said Capt. Mike Arovitch. These soldiers are essentially emergency medical technicians (EMTs) with some additional training, he explained. They will assist with testing, with their duties still being determined.