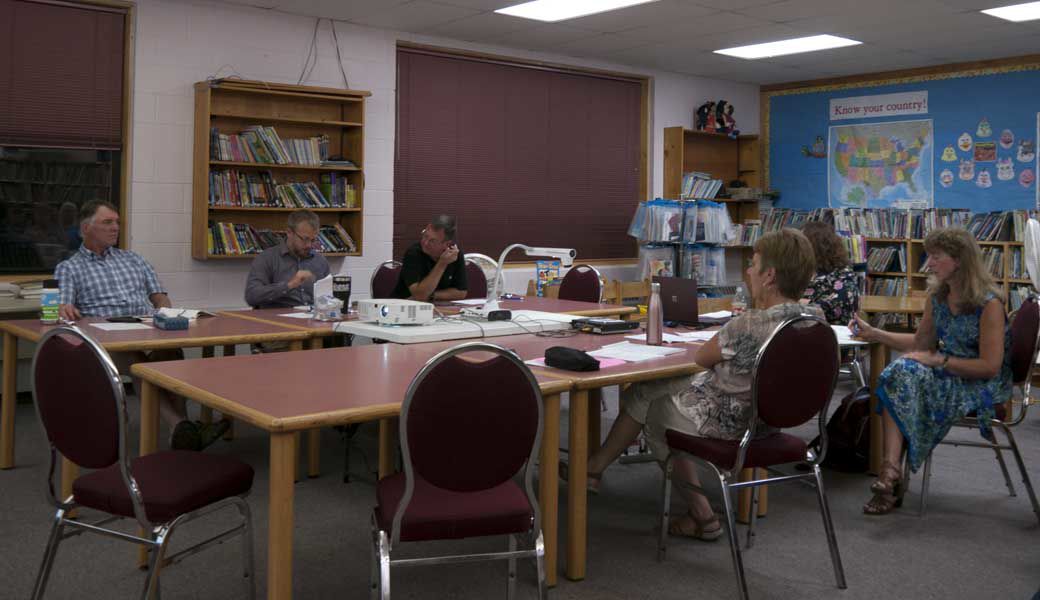 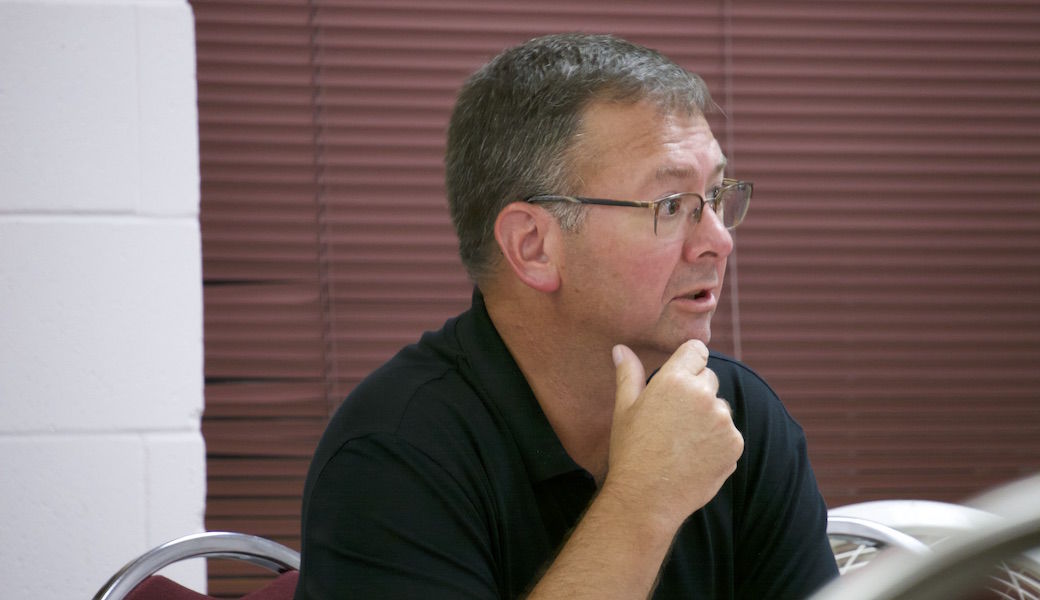 Franklin school board chair Bob Berger explains the class action lawsuit to the rest of the school board. (Michael Frett, MESSENGER STAFF) 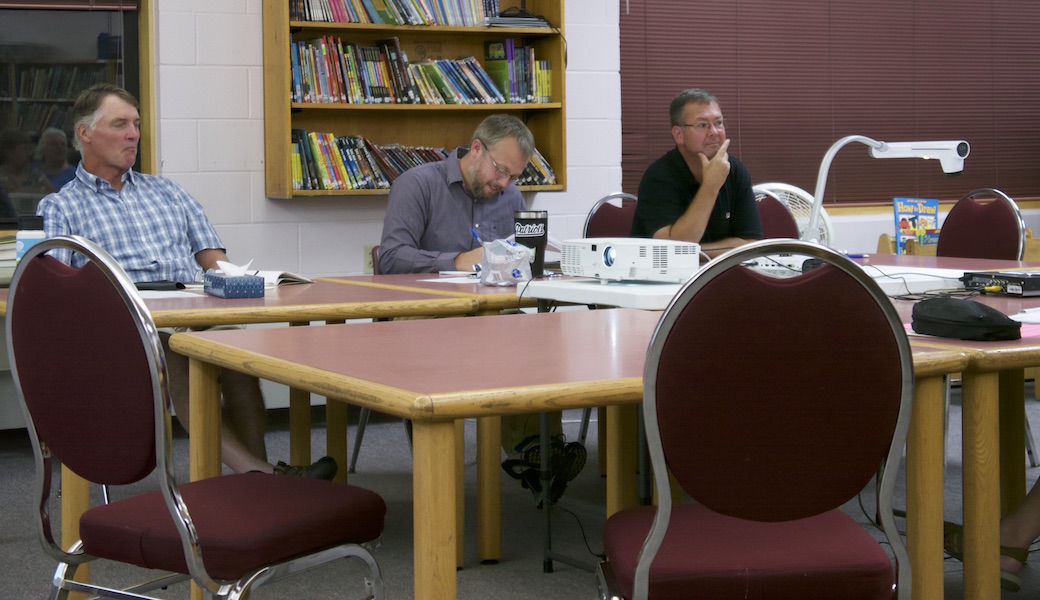 The Franklin school board wrestles with questions about their proposed consolidation under Act 46. (Michael Frett, MESSENGER STAFF)

Franklin school board chair Bob Berger explains the class action lawsuit to the rest of the school board. (Michael Frett, MESSENGER STAFF)

The Franklin school board wrestles with questions about their proposed consolidation under Act 46. (Michael Frett, MESSENGER STAFF)

FRANKLIN – The Franklin School Board decided Tuesday night to join a class action lawsuit against the state of Vermont with the hopes that an injunction requested by said lawsuit may stall a forced merger recommended by the Agency of Education.

Franklin’s school board, which has long opposed the possibility of merging with neighboring schools in Sheldon, Swanton and Highgate, signed onto the lawsuit following an hour-and-a-half long executive session, unanimously deciding in favor of joining the lawsuit.

According to the board’s chair Bob Berger, the lawsuit provided what appeared to be the best route in opposing a consolidation of the Missisquoi Valley Union (MVU) High School member districts of Swanton, Highgate and Franklin – one of 18 forced mergers recommended by the Secretary of Education under Act 46.

The plan is now being considered by the State Board of Education, which will decide whether or not to follow through on Bouchey’s recommended consolidations.

The state board must draft an official plan based on those recommendations by November 30.

“The hope is that, with an injunction filed, that will at least buy us some time for our representatives to either amend or draft legislation to insure a more flexible enactment of Act 46,” Berger said during Tuesday night’s meeting.

“I think it’s clear that that is going to be our most effective avenue of opposing a forced merger,” he added.

The lawsuit, organized by statewide groups opposed to Act 46, alleges that a statewide plan enforcing mergers previously recommended by the acting Secretary of Education is in violation of, among other offenses, the Takings Clause in both the federal and state constitutions.

“Under the Takings Clause of the federal and state constitutions, the State Board cannot reassign ownership of school facilities or other property from the towns that own those properties, or reassign debt among the citizens of different towns, without due process and just compensation,” a letter attorney David Kelley sent to the Agency of Education and State Board of Education said. Kelley is representing the school districts which have joined the suit.

Kelley also alleges that Act 46 is in violation of “clearly stated legislative intent that town votes matter” and that consideration of the secretary’s recommendations have placed “more stringent requirements on alternative governance structures than what is required by law.”

According to Denault, a Franklin resident who’s advocated against Act 46 mergers statewide, six other school boards had already signed onto that lawsuit. He suspected that number to grow to eight by the end of the night and that, by the time of filing, most of the schools recommended for forced mergers will have signed on as plaintiffs.

Denault also said that only 20 school boards were asked directly to join the lawsuit. He estimated that, should the costs of the lawsuit be spread around those 20 schools, it would cost Franklin somewhere between $2,000 and $5,000 to participate.

“It’s coming to the end of the road here,” Denault said, stating that, among the three options the school board could consider in addressing a potential forced merger, the class action lawsuit was “the better of the three.”

Franklin residents, in protesting Act 46, regularly tout three options for addressing Act 46: “surrender” and participate in a merger, litigation, or voluntary closure of Franklin Central School and opening an independent school in its place.

The school board has already warned a pair of articles related to the latter choice, asking Franklin voters to attend a special meeting on Oct. 2 to decide whether or not the Franklin Town School District should convert to a “non-operating school district” and sell its assets to the town.

An informational meeting related to that vote is planned for Sept. 25.

According to Denault, someone from the Village School of North Bennington, another school that successfully circumvented a possible merger by incorporating as an independent school, was invited to attend that meeting.

“We will hold that informational meeting and see where it goes from there,” Berger said Tuesday night.

A pair of letters

The Franklin School Board signed on to two letters Tuesday night imploring the State Board of Education to reconsider the supervisory union’s proposal for an alternative governance structure (AGS), that is an un-merged district, and not forcibly merge Franklin’s district with Swanton’s and Highgate’s.

Under Act 46, districts were encouraged to pursue voluntary mergers to improve educational opportunities and condense administrative costs. Schools deciding not to pursue mergers voluntarily were required to draft an AGS to better achieve those goals.

Schools opting against a merger did so with the understanding that, should the Agency of Education believe a merger could better achieve those goals than an AGS, those schools risked a forced merger.

“It was clear from the questions of the state board and acting secretary’s proposed plan that there are concerns with our… AGS proposal as presented,” Berger read from the letter. “We would like the opportunity to address those concerns.”

The letter made specific references to “carousel-style board meetings” as an option for “providing a structure that would align decision making” for the supervisory union, as well as criticisms the state board levied against the AGS’s elementary school choice option.

The state board and Bouchey’s plan both previously identified the AGS’s elementary school choice plan as illegal according to existing state statute.

The supervisory union letter also restated FNWSU board members’ concerns over the recommended consolidation of the Sheldon school district with a unified school district in Bakersfield and Berkshire.

That merger would effectively pull Sheldon out of the FNWSU and realign it with the Franklin Northeast Supervisory Union.

School board chairs from Highgate, Swanton and Sheldon had already signed onto the letter ahead of Franklin’s signature last night. Superintendent Julie Regimbal said that the MVU board chair intended to sign with the MVU board’s approval when that board met later this week.

The second letter was tailored more specifically to Franklin, in particular to Franklin’s status as a “geographically isolated” school.

A 2011 state study identified Franklin as a geographically isolated school, a condition that Act 46 recommended the Secretary of Education “be mindful of” when drafting a statewide merger plan.

The letter also underscored Franklin’s commitment to working closely with other schools in the supervisory union.