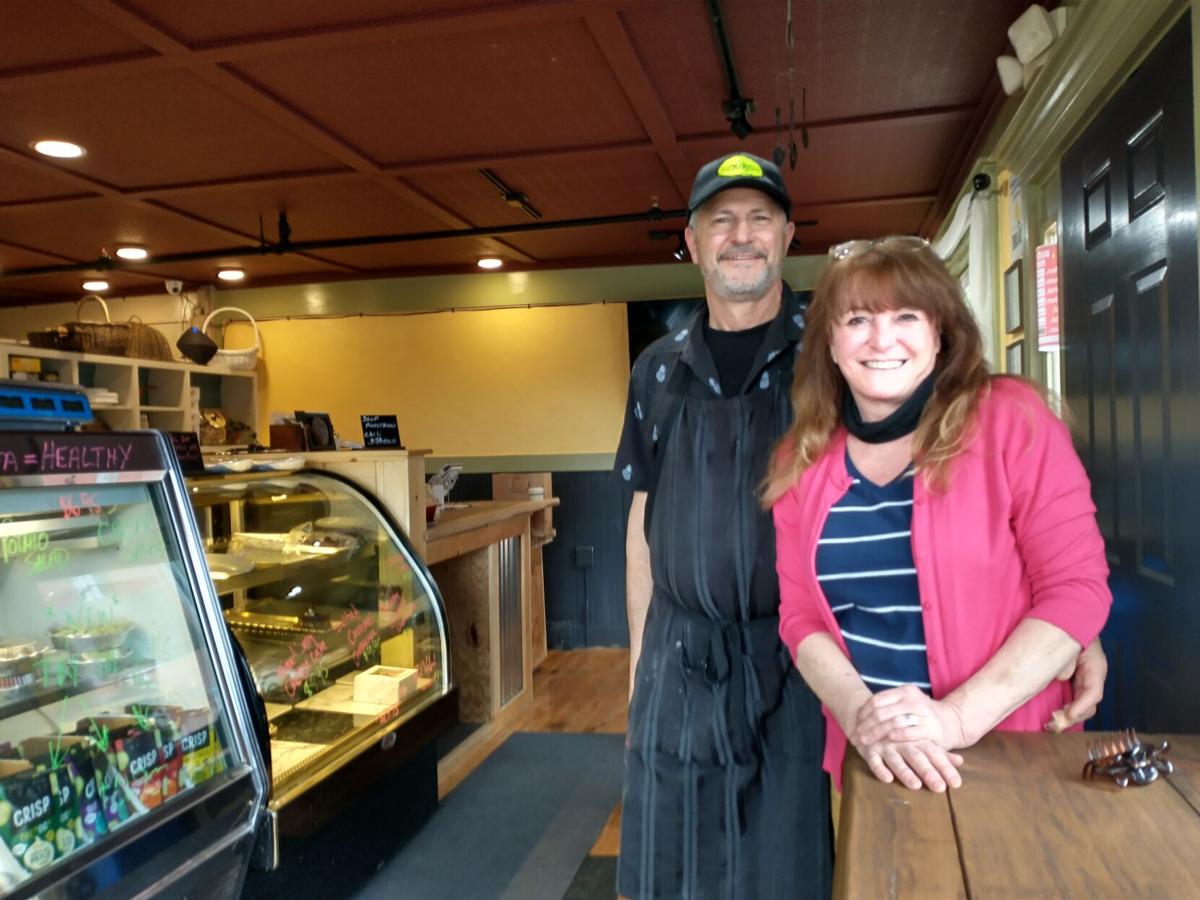 Nourish owners Rick and Dara Lavallee pose for a photo inside their eatery on Thursday. 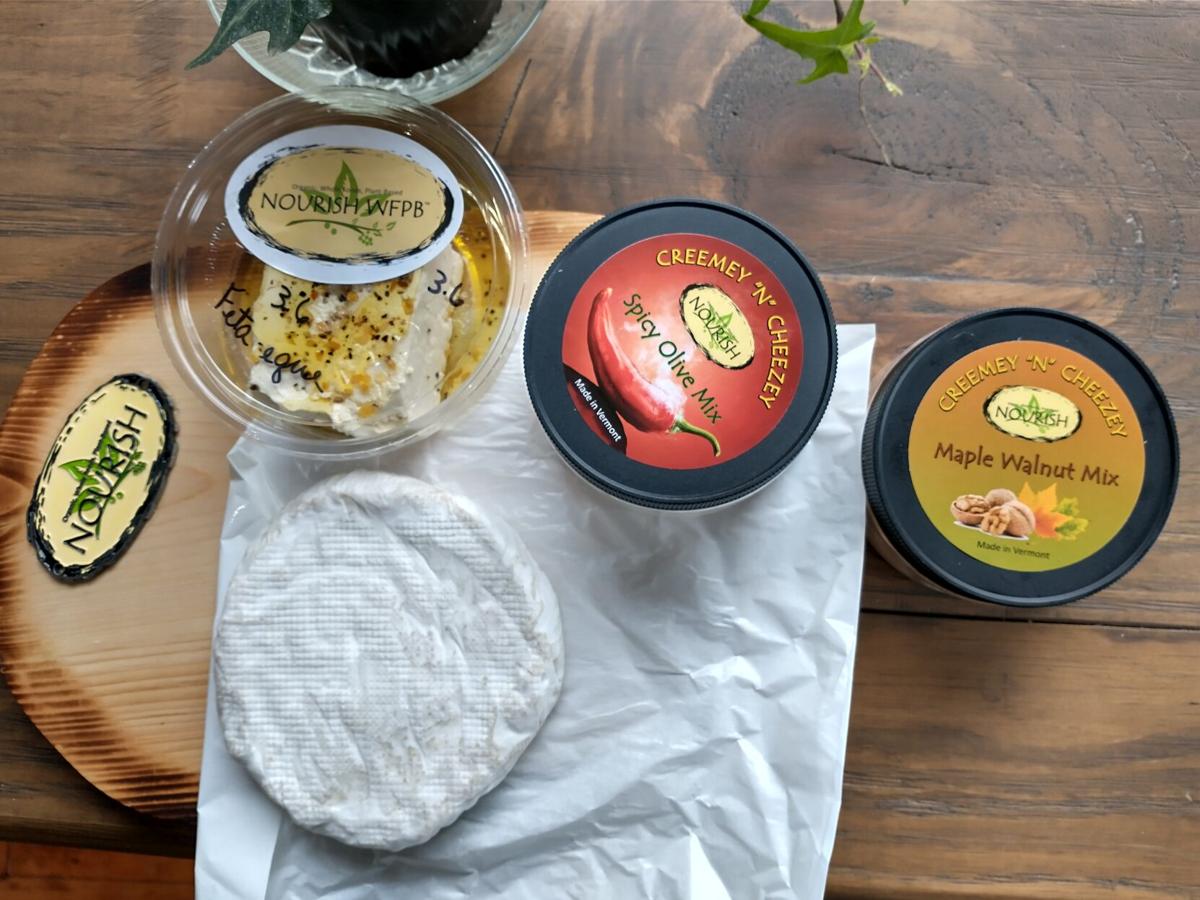 A variety of Nourish’s vegan products, including Cheez spreads and vegan brie.

Nourish owners Rick and Dara Lavallee pose for a photo inside their eatery on Thursday.

A variety of Nourish’s vegan products, including Cheez spreads and vegan brie.

“We learned that the hardest thing for anyone to give up from an omnivore to a vegan, vegetarian or plant-based lifestyle,” Nourish co-owner Rick Lavallee said, “there’s one item that everyone says ‘I just can’t give up--’”

Before I became a journalist, I worked in wineries and wine and cheese shops. You name it, I paired it, whether it be in seminars, at tastings, location openings, festivals and events. Ash-ripened, cider-washed, bloomy rind, cow, goat, sheep, hard, soft — you name it, I’ve probably paired it.

My big game was always the soft, raw-milk bloomy rinds. You could take away my cheddars and Swiss if you really had to, but don’t touch my brie, camembert, Harbison and Lille Coullumiers. Brie had always been a favorite of my mother’s, who would bake it at Christmastime with raspberry or apricot jam and serve it with crackers, and that plate was usually where you could find me as a shameless child leaving none for my family.

Nourish and their cheeses changed the game.

Upon moving to St. Albans, a little shop on Center Street caught my eye, and I figured it was a health food co-op of some sort because of the name: Nourish.

I did not expect to find next-level aged gourmet cheeses with dark, ocean-blue veins, soft bloomy rinds and Grecian crevices drizzled in olive oil and spices.

“These are made from cashews,” Rick Lavallee said.

Using a fine cheese knife, Lavallee cut a sliver of “brie” off of a textured, powdery wheel, and I saw the characteristically soft press of the blade into an obviously very melty texture, as a brie should be.

The cheese coated the knife and had to be scraped off with a cracker, leaving soft cream in its wake. The rind stayed semi-firm, an obviously soft cheese, but stunningly similar to a well-ripened and aged brie.

The taste is beautifully familiar, an introduction to brie’s second cousin: the rind has that beloved soft chew, the interior first chevre-like and decadent, before an unctuous and velvety center.

Cashews, I tell you.

Dara Lavallee obtained her culinary arts degree from the University of Georgia and is a classically trained chef, having headed kitchens across the country and studied at Le Cordon Bleu in London.

As executive chef, she also opened Nicky Blair’s restaurant on the Sunset Strip in Los Angeles, which at the time had 30 limited partners: Rupert Murdoch, Frank Sinatra, Fred Astaire and Kenny Rogers, among others.

“I never got to work with Julia Childs, and I kind of wish I had,” Dara laughed.

Her husband is a Type I diabetic, so the couple decided to consider an entirely plant-based lifestyle several years ago.

“I’ve always loved animals, but when I learned about the things that went on in factory farms and the filth of it, the cruelty of it, I made the switch,” Dara said. “I love cheese, so I was highly motivated!”

For Rick, the transition was natural. An active paramedic at the time, Rick said he chose to eliminate meat and cheeses cold-turkey after both he and his wife took some online courses in nutrition.

“I was 62, and I was pronouncing people who were younger than me dead,” Rick said. “She comes to this profession from the animal advocacy perspective, I come at it from the health advocacy side of things.”

Five years in the making, Dara’s entirely plant-based cheeses are made from nuts. She makes parmesan, feta and ricotta cheeses from almonds, blue cheese and brie from cashews, and says there’s more to come.

Dara’s blue cheese is creamy, bright, musky and floral, sharper in nose than a more traditional blue, but semi-soft in texture with a creamy mouthfeel and pairs excellently with apricot preserves, cherry and sweet mustards on warm bread.

Their Mac-n-Cheez is blasphemous in the most wonderful way: rich, decadent, creamy “cheez” sauce made entirely from plants and poured over elbow noodles for an only slightly nutty sauce that tastes like upscale mac with a deeper soul.

You would never, ever know the cheezes were made from cashews, almonds, time, dedication and love, but then again who knows the recipe for love?

“It was all dogs and Starbucks,” Rick said of their first date.

Dara and Rick also create and curate their custom “cheese” spreads, cakes and baked goods, salad dressings, breads, desserts and lunch specials, and said they are looking forward to expanding their menu and brand, possibly with outdoor dining this summer.

“We can’t keep them on the shelves,” Rick said of his sales in Burlington.