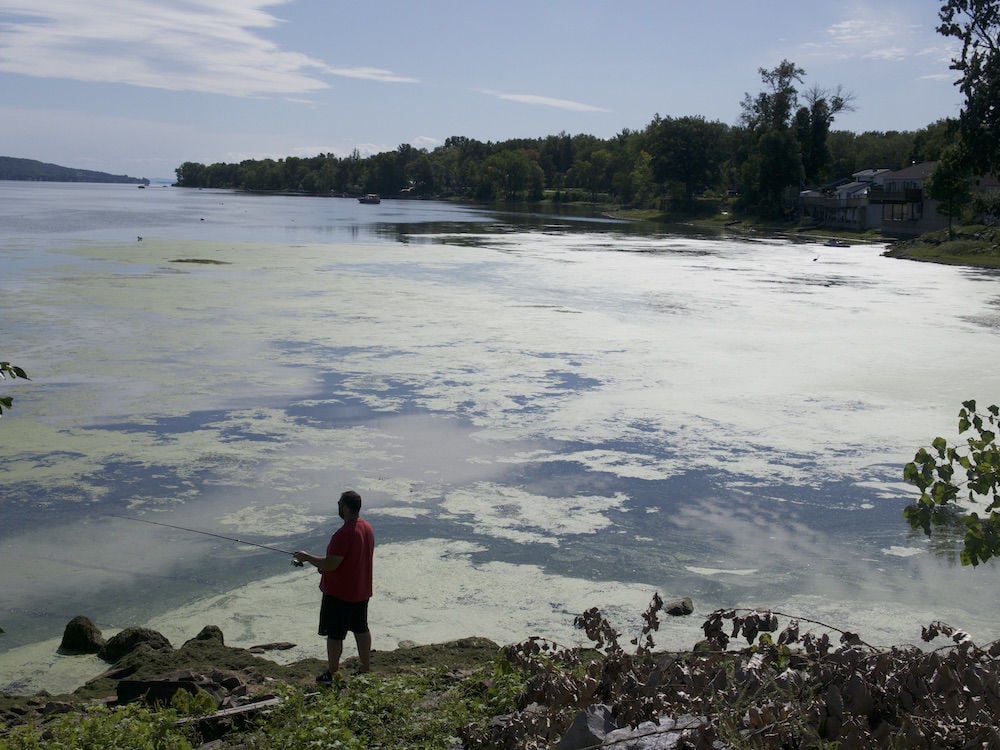 An angler casts into St. Albans Bay near the Black Creek marsh, into a slurry of native duckweed and blue-green algae. 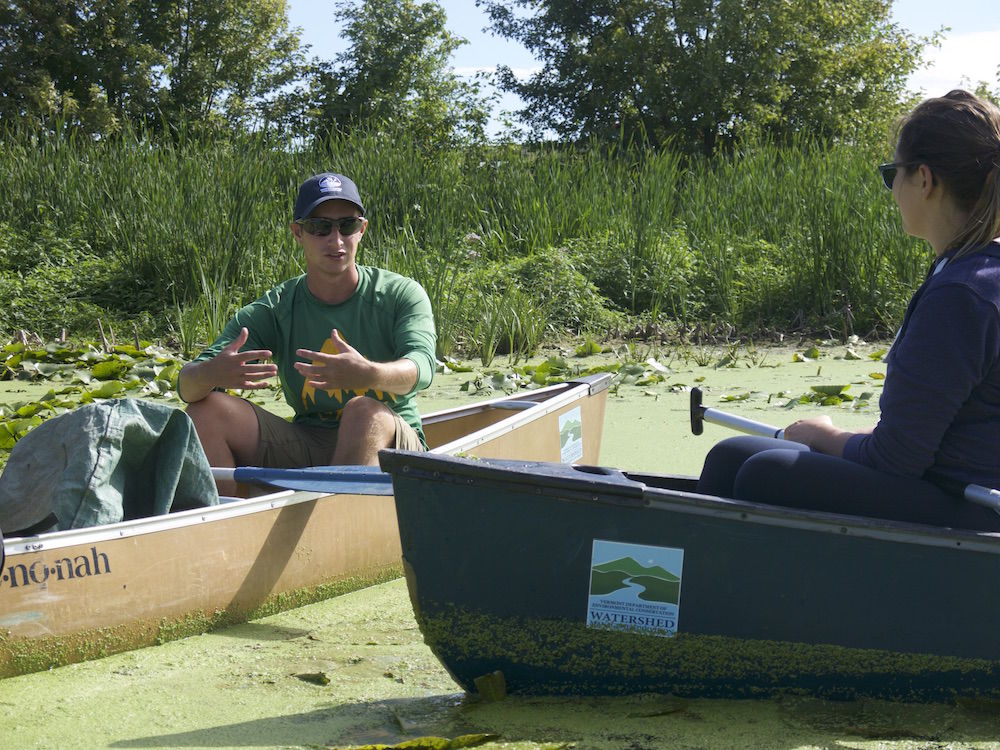 Ryan Colarusso from the Dept. of Environmental Conservation describes a bloom of water chestnut in the Black Creek marsh. DEC officials joined members of the Army Corps of Engineers Thursday to describe a study of latent phosphorus in St. Albans Bay and cull invasive plants in the nearby Black Creek wetland.

ST. ALBANS – State officials and the Army Corps of Engineers were in St. Albans Bay on Thursday as part of a study into treating phosphorus already in the bay.

For years, questions have swirled around what to do about legacy phosphorus in the bay feeding blue-green algae blooms. The conundrum of whether it should it be treated now or after the current flow of phosphorus into the bay has been stopped has bedeviled activists, scientists and policymakers.

The new study will provide options for addressing that legacy phosphorus.

“One obvious school of thought would say you wait until you’ve got your watershed completely shut down to the maximum degree possible,” said Neil Kamman, a senior policy advisor at the Dept. of Environmental Conservation. “That’s going to be a long time, and people deserve to get some relief before that time.”

Beyond a consideration of more modern technology that advanced in the decade since that last study, Kamman said the state and Army Corps of Engineer would also look into a practical timeline relative to water quality work upstream in the Stevens and Jewett Brook watersheds.

Phosphorus from the landscape encourages blooms of cyanobacteria, better known as blue-green algae.

Historically, the state’s focused on addressing water quality upstream, at municipal wastewater sites and in agricultural areas where the amount of phosphorus leading into watersheds could be limited.

But Kamman suggested the study could provide a paradigm shift that could inform more immediate relief for St. Albans Bay.

DEC Commissioner Boedecker, speaking with the Messenger, compared it to the recent installation of an aeration system at Lake Carmi, another impaired watershed where officials had concluded enough progress had been made in the surrounding watershed to make targeting legacy phosphorus practical. “If you want to imagine, we’re at a similar phase here,” Boedecker said.

“The question is have we gone far enough in the watershed treatment,” Boedecker elaborated. “What we’ll have is an informed menu of choices, where, if there is a technical feasibility and financial feasibility, to implement any additional measures other than the watershed reductions.”

Kamman said there was similar preliminary work being prepared for the Missisquoi Bay, though the state had only just started taking those steps.

Funding for an Army Corps of Engineer study of St. Albans Bay was secured under Section 542 of the federal Water Resources Development Act with an accompanying match from Vermont.

The St. Albans Area Watershed Association previously leased a trio of aerators in the early 2000s to attempt addressing legacy phosphorus in St. Albans Bay. Those aerators, smaller than those now installed at Lake Carmi, brought mixed reviews and were later removed.

Aside from an introduction to the Army Corps of Engineers’ study, Thursday’s visit to St. Albans Bay saw a culling of invasive water chestnut from the Black Creek wetland, where, according to DEC’s Kim Jensen, a significant infestation has developed over the years.

Water chestnut is an aggressively prolific aquatic plant from Europe, typified by a strand of multiple rosettes that can sprout from a single seed. According to the DEC, they have little nutritional or habitat value for other wildlife, and decomposition of water chestnut can rob water of oxygen and lead to plant or fish die-offs.

The rosettes, rung by a clump of triangular leaves, can hold several chestnut seeds each.

The typical water chestnut seed is a hard, barbed nut.

A series of kayaks and canoes, staffed by DEC officials, members of the Lake Champlain Basin Program, the Army Corps of Engineers and a representative form Sen. Bernie Sanders’s staff, set off for the marsh, culling roughly 500 rosettes of water chestnut.

Those plants, according to Jensen, would be brought to Montpelier and composted by local farmers at sites far from any body of water.

Per Jensen, as many as 8,000 water chestnut rosettes had been pulled from the Black Creek wetland last year. She told the Messenger she considered the cutoff for a “bad infestation” to be around 5,000 rosettes.

ST. ALBANS – According to an Environmental Protection Agency (EPA) review, Vermont is on track to meet water quality targets mandated under La…