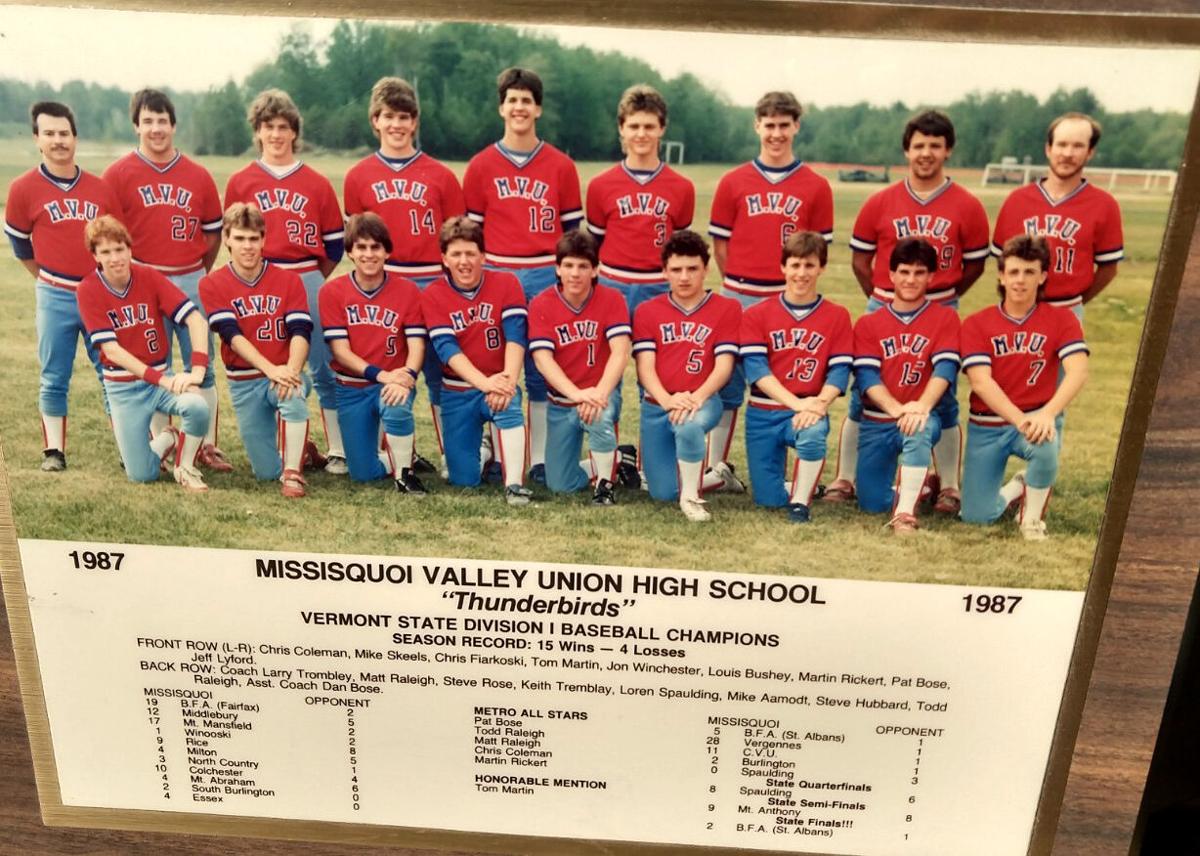 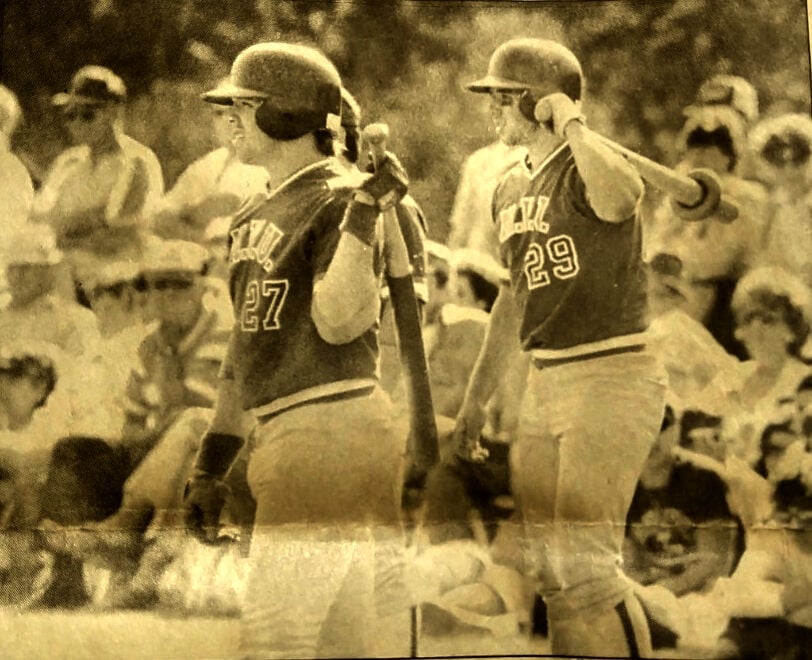 Matt and Todd Raleigh, the core of MVU’s power, prepare for at bats. 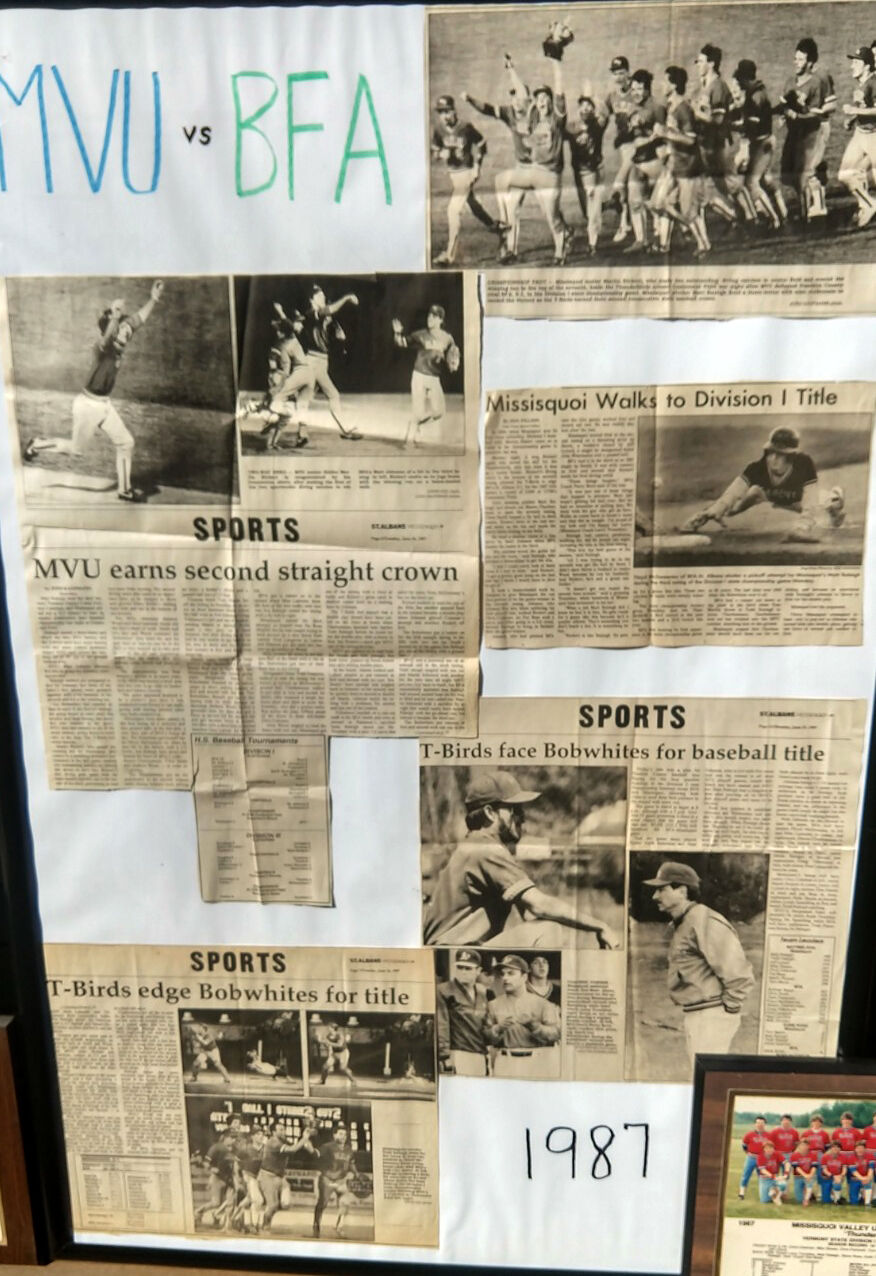 Trombley’s collection of articles from the 1987 title game win. 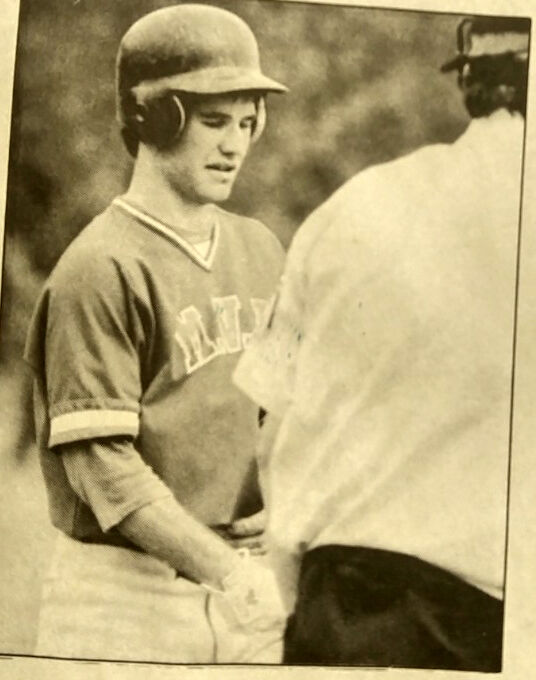 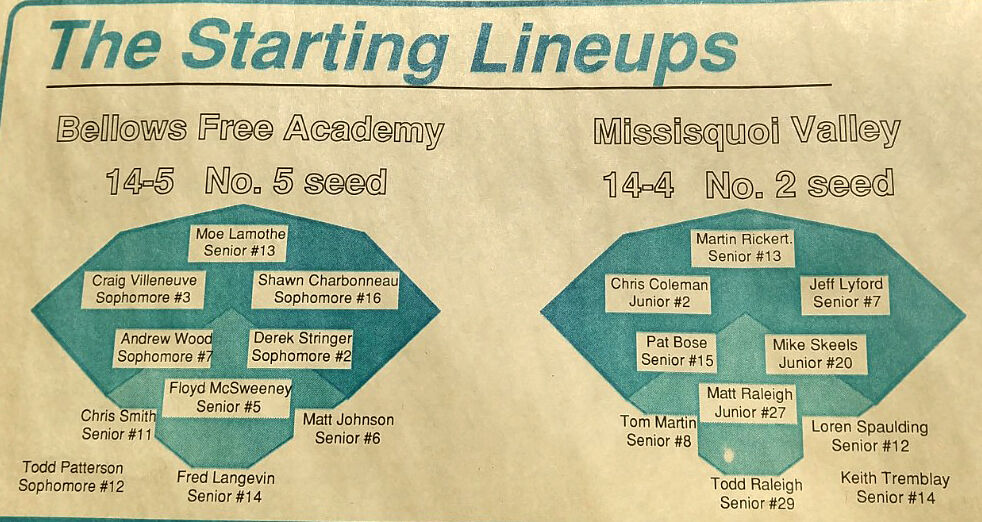 BURLINGTON — In the spring of 1987, the MVU Thunderbirds returned to Centennial to defend their ‘86 DI title.

“That ‘87 team was loaded with talent; we had a lot of returning players, and it was the best team I ever had,” said Larry Trombley, coach of the MVU Thunderbirds.

Perry Bove, who’d assisted the highly successful Jim Billings of the Burlington Seahorses, was the head coach of the BFA St. Albans Bobwhites in ‘87.

“When Bove arrived to coach in St. Albans, it was a big deal. He had Lenny Whitehouse, who had pitched in the major leagues, as his assistant,” explained Trombley.

Trombley recalled the build-up to the title game, including full-page spreads in the St. Albans Messenger.

“Perry was always doing something outrageous. He told his team that if they made it to the state finals, he’d walk home to Burlington from practice,” said Trombley, laughing.

“All the news outlets covered ‘the walk.’ They had film crews with them as they walked all the way to Burlington from St. Albans.”

Much like the ‘86 year, storms blew in. This time, they came before the game began, and the game canceled before the first pitch.

“All the momentum from the walk got deflated,” said Trombley.

MVU had a powerhouse team, but the Bobwhites had stars of their own, including Matt Johnson, who would go on to be named the NESCAC Player of the Year at UVM in men’s basketball.

“Matt was a phenomenal athlete. He was one of the greatest basketball players in Vermont history; he scored 2,000 points in high school. Not many guys do that,” said Trombley.

“That year, BFA won the hockey title with John Leclair. Matt had won a title in basketball, and now they made the finals in baseball.”

The Raleigh brothers, Todd and Matt, had power of their own, hitting five home runs each in the regular season, and the team was eager for a repeat.

“There was all that power at the plate, and the game ended up being a pitching duel. We won 2-1 on a bases-loaded walk in the top of the seventh,” said Trombley.

Trombley noted that the Thunderbirds had two missed plays that caused trouble in the game.

“Twice, we popped up on a sacrifice bunt into double plays. I had a hit and run on, and Tommy Martin, a terrific baseball player, hit a beautiful single into right field, textbook, and Todd rounded second, hitting the bag just like you’re supposed.”

The Thunderbirds had men on first and third with one out when the umpire declared that Todd had missed the bag and called him out.

“Todd told me he knew he hadn’t missed the bag; I told him I knew he didn’t!” said Trombley.

Another bad break came with the bases loaded and one out for BFA. MVU pulled the infield in, ready to capitalize on a weak ground ball.

“Sure enough, we get an infield hit to third. Martin picks it up and throws to Todd at home. Todd grabs the ball, and, as he’s turning, Shawn Charbonneau comes barreling in and knocks Todd to the ground so that he can’t complete the double play to first,” said Trombley, shaking his head.

“The umpire wouldn’t give it to us. There was no slide at home, and the batter should be out--I almost got thrown out. I remember my last words to that umpire, ‘that’s piss poor!’ I just kept walking.”

With the bases still loaded and two outs, Matt Johnson, known as the most ‘clutch guy’ in sports in Vermont at the time, came to the plate.

“Doesn’t he hit a sinking line drive...and I thought that was the game,” said Trombley.

Martin Rickert was in center field for the Thunderbirds, and for some reason, he’d come in shallow.

“He comes running in full speed, dives and catches it with his glove up, and we’re out of the inning. It was unbelievable,” said Trombley.

The Thunderbirds retained the lead through the top of the seventh as the Bobwhites prepared to take their last at-bats.

“Chris Smith hit a bloop into shallow right-center, and here comes Marty Rickert again, fully extended--dive and catch. The next batter hit a ground ball to short, and the game was over,” said Trombley.

“What a tension-filled game! Mistakes on both sides, a pitching duel--poor Matt Johnson. He pitched a brilliant game but lost control at the end.

“He was such a smart, competitive player. He’d battle you every pitch, and he ended up losing on a bases-loaded walk.”

The game was dubbed ‘the Sweet Repeat,’ and the Thunderbirds had t-shirts made to celebrate.