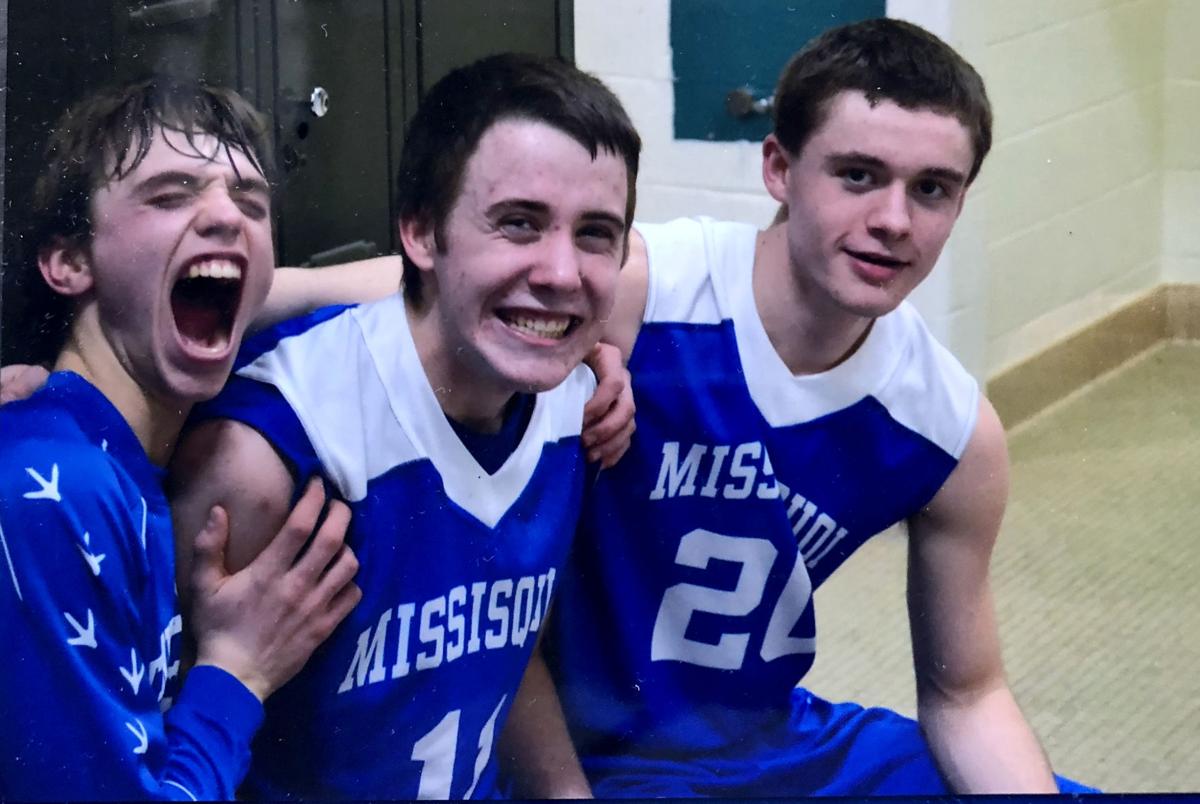 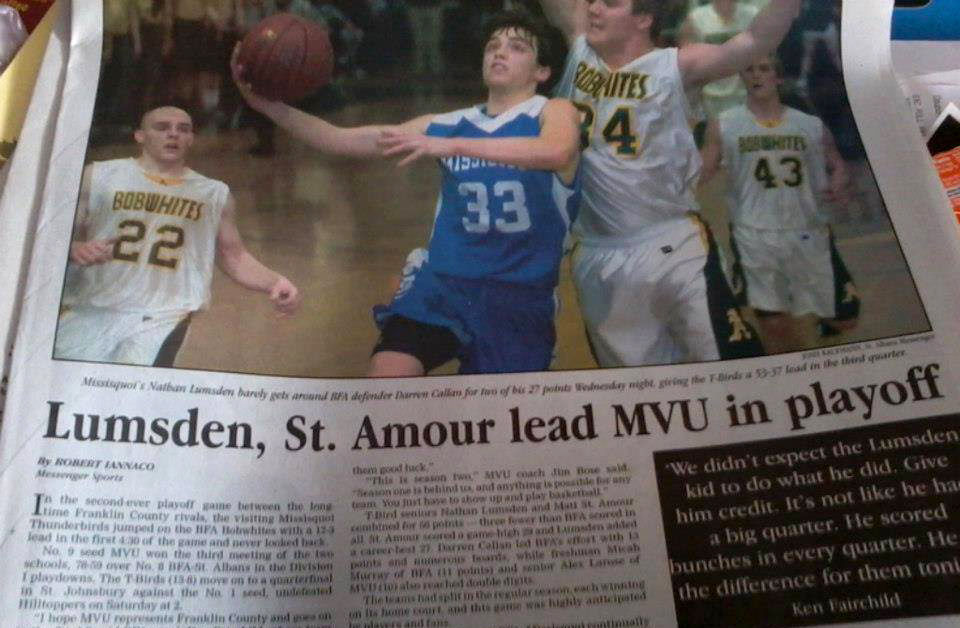 The 2013 Messenger Sports newspaper article with a photo of Nathan Lumsden taking a shot. 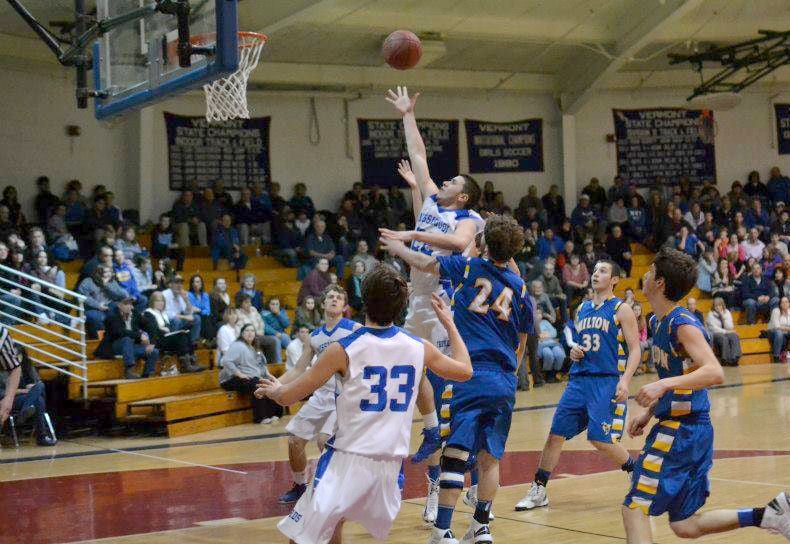 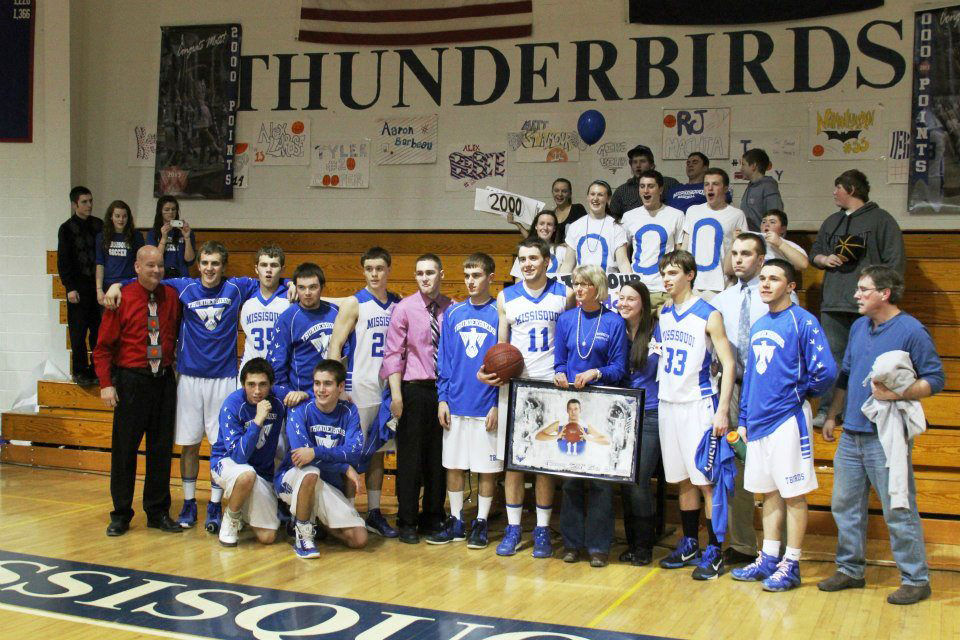 Nathan Lumsden and the 2013 MVU basketball team on senior night, 2013. 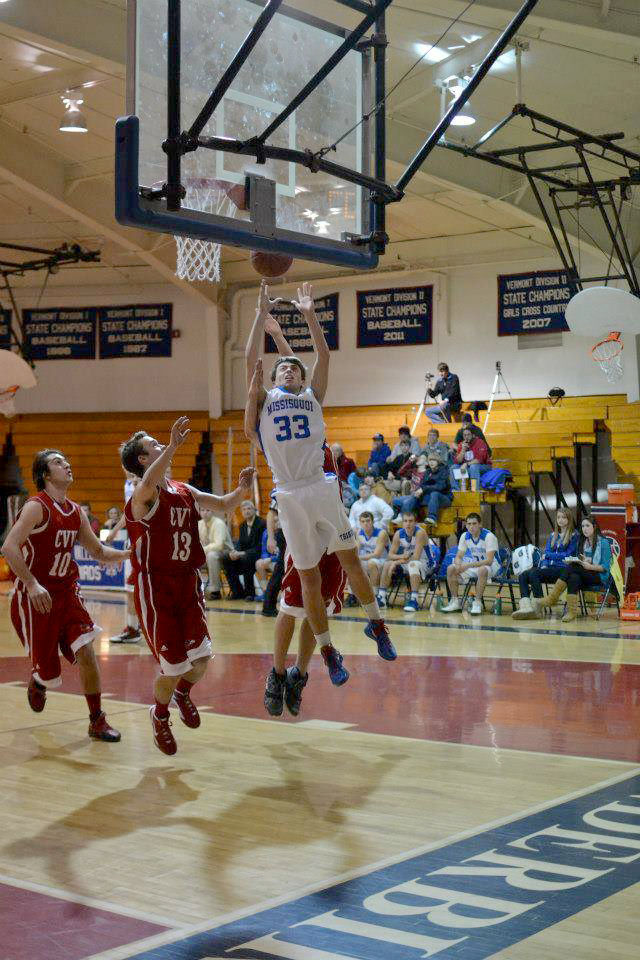 Nathan Lumsden playing for MVU in his high school years.

The 2013 Messenger Sports newspaper article with a photo of Nathan Lumsden taking a shot.

Nathan Lumsden and the 2013 MVU basketball team on senior night, 2013.

Nathan Lumsden playing for MVU in his high school years.

“We played against BFA at their home court. We won at our place during the regular season, and they won at their place,” said Lumsden.

“The Vermont basketball gods ended the regular season records with us as the 9 seed and BFA as the 8 seed. As fate would have it, we got our rubber match at their home turf.”

On game night, the MVU Thunderbirds took the short ride to BFA to take on the Bobwhites.

“We were ready for it this time. We won the tip-off and never looked back. BFA never pulled within 10 points the rest of the game. We ended the first quarter 21-7.

“There was really only one scary moment where I could feel the momentum change. Darren Callan sunk a 3-pointer and then got a quick steal; he tipped it to his brother Dylan who drilled another 3-pointer,” said Lumsden.

“They scored six points in a matter of seconds. But it wasn’t enough to rally them. Even after a few more points from the Bobwhites at the end of the second quarter, it was still 40-29 MVU at the half.”

Games that pit two in-county teams against one another are usually intense, and MVU capitalized on that intensity to hold onto their lead.

“We didn’t slow down after halftime; we kept on throttling them all night long. It was a great team win,” said Lumsden.

That night, the MVU Thunderbirds soared to victory thanks to a full-team effort.

“I played out of my shoes along with Alex Larose, who also had one of the best games of his career. Tyler Cooper out-rebounded and out-dribbled everyone in the building, and Matt St.Amour had a typically stellar performance,” said Lumsden.

“It was just fun. We all knew that we weren’t going to take home the D1 title, but man, it felt good to stomp on the Bobwhites one last time.”

The victory was especially sweet for Lumsden as it was the last time he’d play with his good friends.

“I grew up playing ball with all those guys from the time I was in third-grade mini metro, and to me, that was our championship game,” said Lumsden.

“It was amazing, going out on top over our rivals in a place that was always hard to play in. I still keep a picture in my bedroom of Matt and Tyler and myself hugging after the game.”

Games between the two schools are always well attended, and the playoff game was no exception.

“I still remember Caleb Lothian starting the ‘I believe, I believe that we will win’ chant in the crowd,” said Lumsden.

One of Lumsden’s favorite moments came on the ride back to MVU.

“After the game, we got back onto the bus. This is one of my favorite memories: Matt St.Amour came up to me and asked how many points I had. I said ‘27’. He started laughing and smiling and told me that he scored 29. I loved that,” said Lumsden.

“Even on my best night of the year, I was no match for Matty 2K. But I wouldn’t have it any other way. That win on that court was all that mattered.”

"I grew up playing ball with all those guys from the time I was in third-grade mini metro, and to me, that was our championship game."