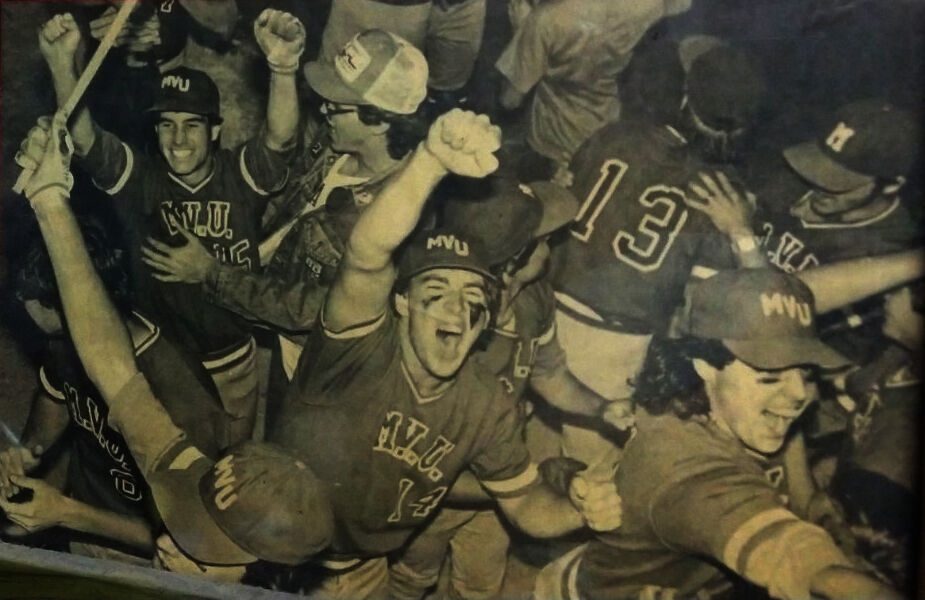 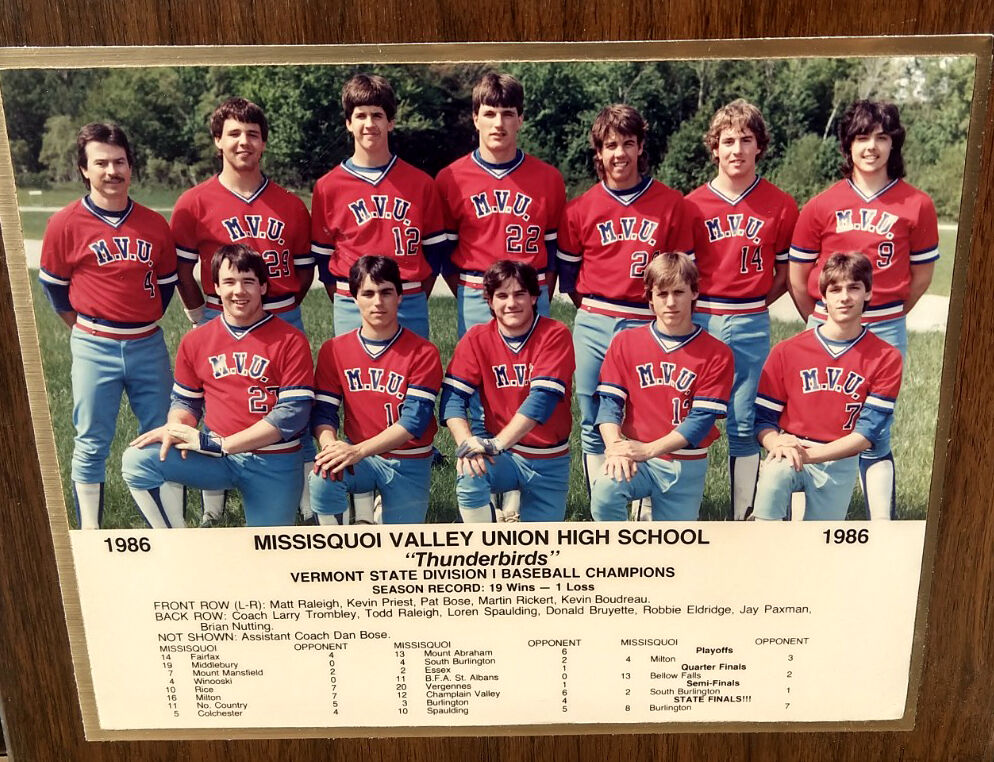 A photo from the 1986 title game of Matt Raleigh with his hands in the air adorns a poster board display. 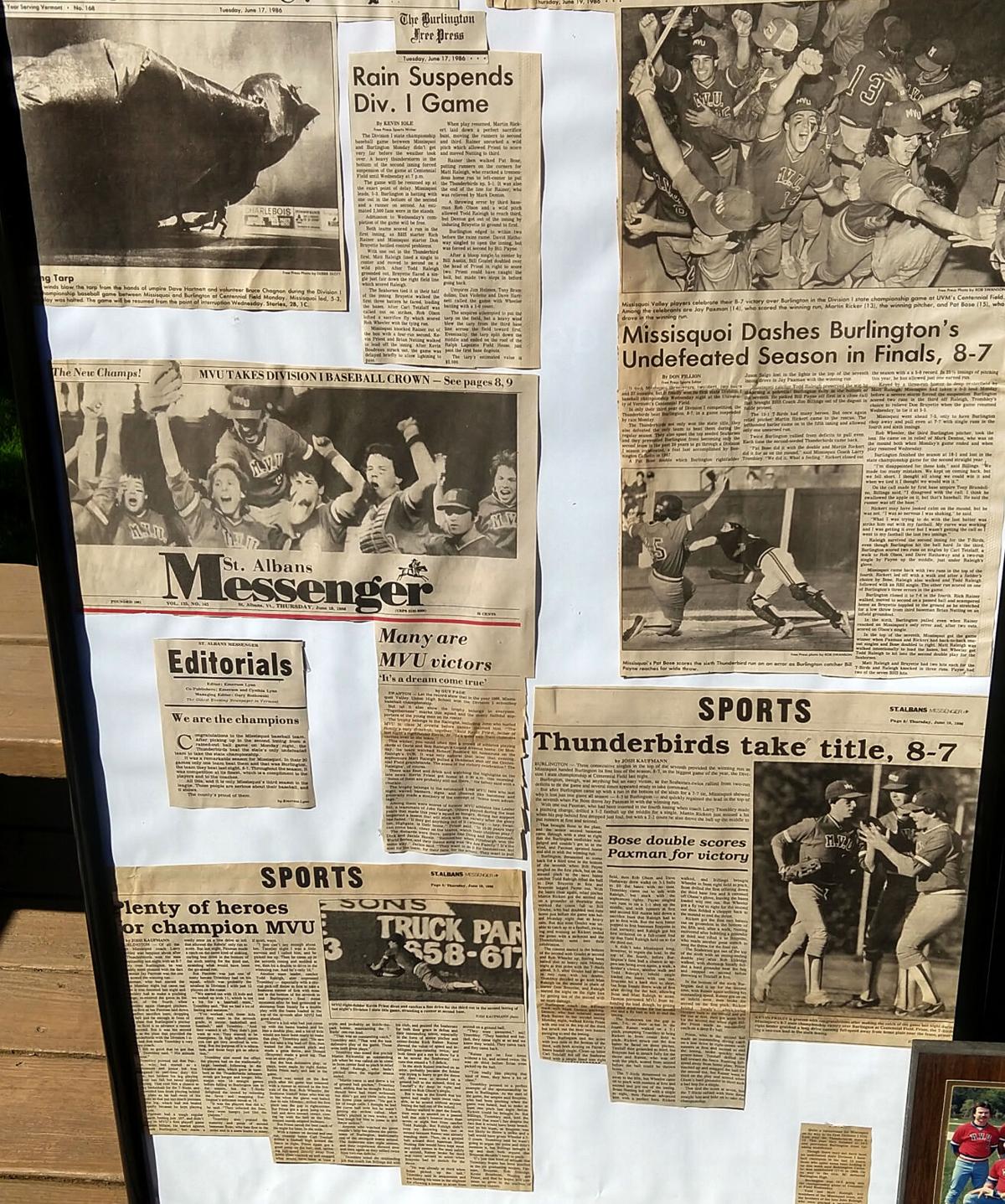 Trombley has an extensive collection of newspaper clippings from the 1986 title game.

A photo from the 1986 title game of Matt Raleigh with his hands in the air adorns a poster board display.

Trombley has an extensive collection of newspaper clippings from the 1986 title game.

BURLINGTON — Larry Trombley was at the helm of the MVU Thunderbirds varsity baseball program in its most successful era.

All that success began in 1986, when the Thunderbirds went 19-1, only falling to undefeated Burlington in the regular season.

“In today’s world with our technology, that state title game in ‘86, would never have been started,” said Trombley. “In those days, we didn’t have the capacity to follow the weather as we do today.”

Rich Rainer, the star athlete of Burlington, from Little League to varsity, took the mound for Seahorses for the DI title game.

In the second inning, with two men on, Matt Raleigh, a sophomore, came to the plate for MVU.

Trombley recalled the howling wind whipping across the field ahead of the incoming storm.

“Matt hit a ball that hit the top railing of the bleachers in center field. That ball must have traveled 440 feet,” said Trombley.

“He looked back at the dugout, raised his hands, and we were on our way. It was 5-3, and we had all the momentum.”

Rainer left the game after surrendering the home run, and moments later, the skies opened.

The umpires decided to utilize the Expos tarp to cover the field. A gust of wind snatched the tarp, blew it across the field, and ripped it in half. The coaches association later had to replace the massive tarp at a cost of $2500.

Downpouring rain caused the game to be suspended, and Trombley, shaking his head, recalled it was quite a mess.

The rescheduled game began three days later, and this time, the weather cooperated.

The teams took the field, trading the lead as they battled for the coveted DI title.

In the bottom of the sixth, Burlington tied the game for the second time, but in the top of the seventh, MVU regained the lead on a double by Pat Bose that drove in Jay Paxman.

In the bottom of the seventh, a Burlington batter made it to first, but Todd

On the next pitch, the Seahorse runner broke for second, but stopped. Todd Raleigh, MVU’s catcher, noted the big lead.

“Earlier in the game this same player had been hit hard in the face by Don Bruyette’s tag on a pickoff attempt,” explained Trombley. “On the next pitch, Todd came up firing to first; the player didn’t dive back to the bag and was called out.”

The third out, moments later, secured the win, and MVU players and fans celebrated their first, but not last, DI baseball title victory.

"He looked back at the dugout, raised his hands, and we were on our way. It was 5-3, and we had all the momentum."