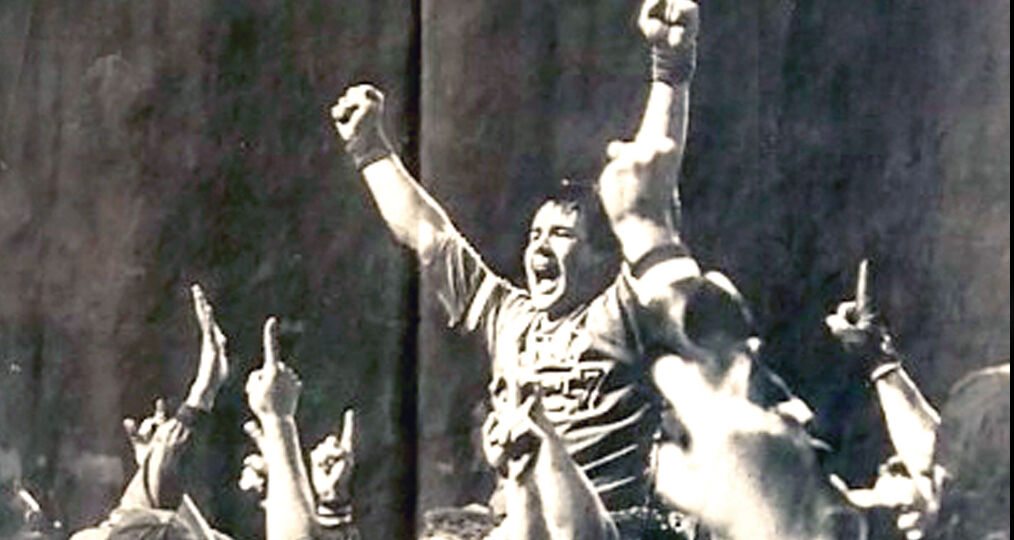 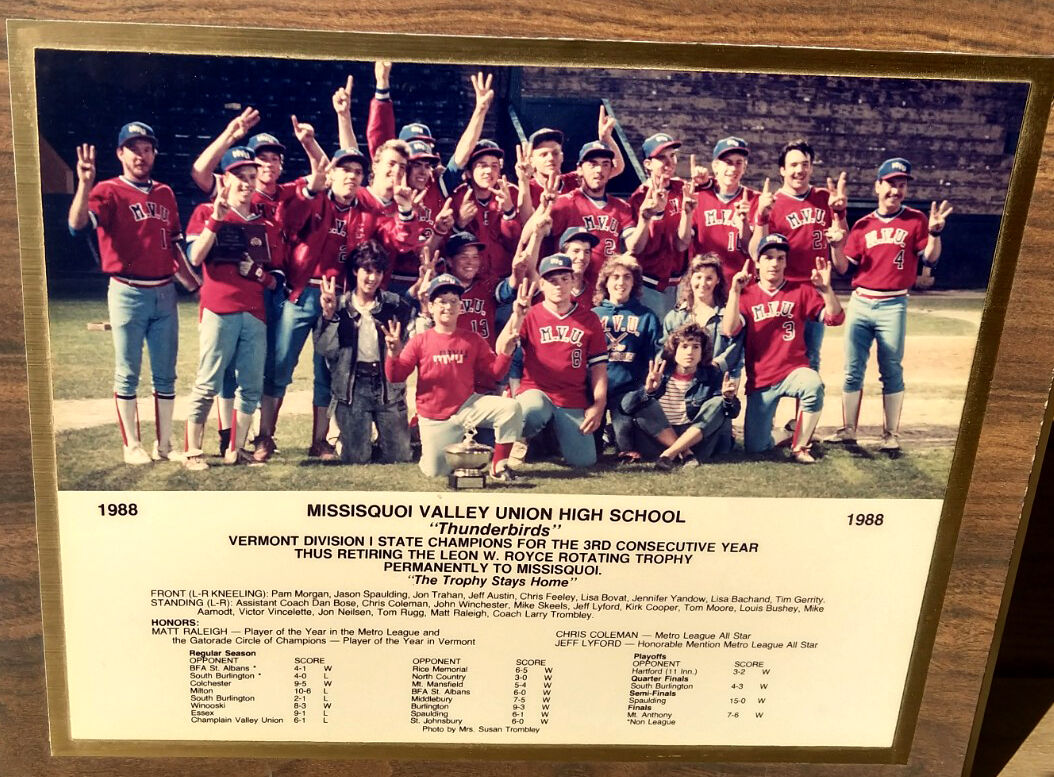 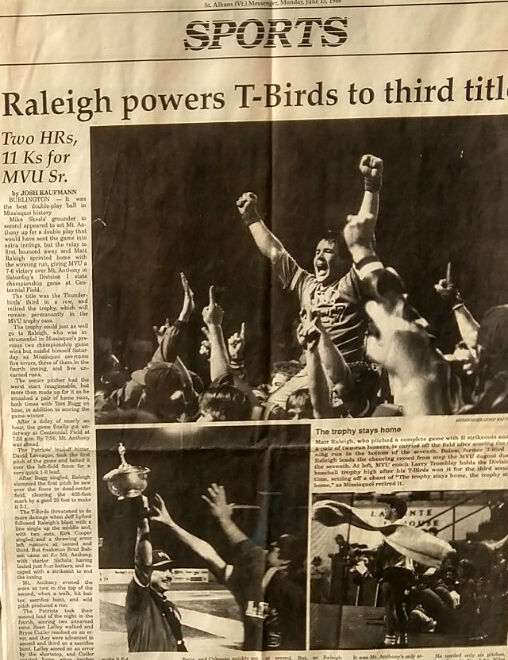 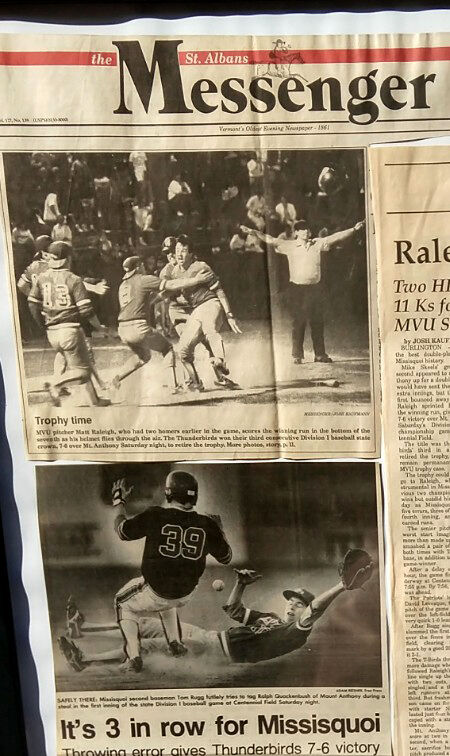 A close up of the Messenger article published after the DI state title win. 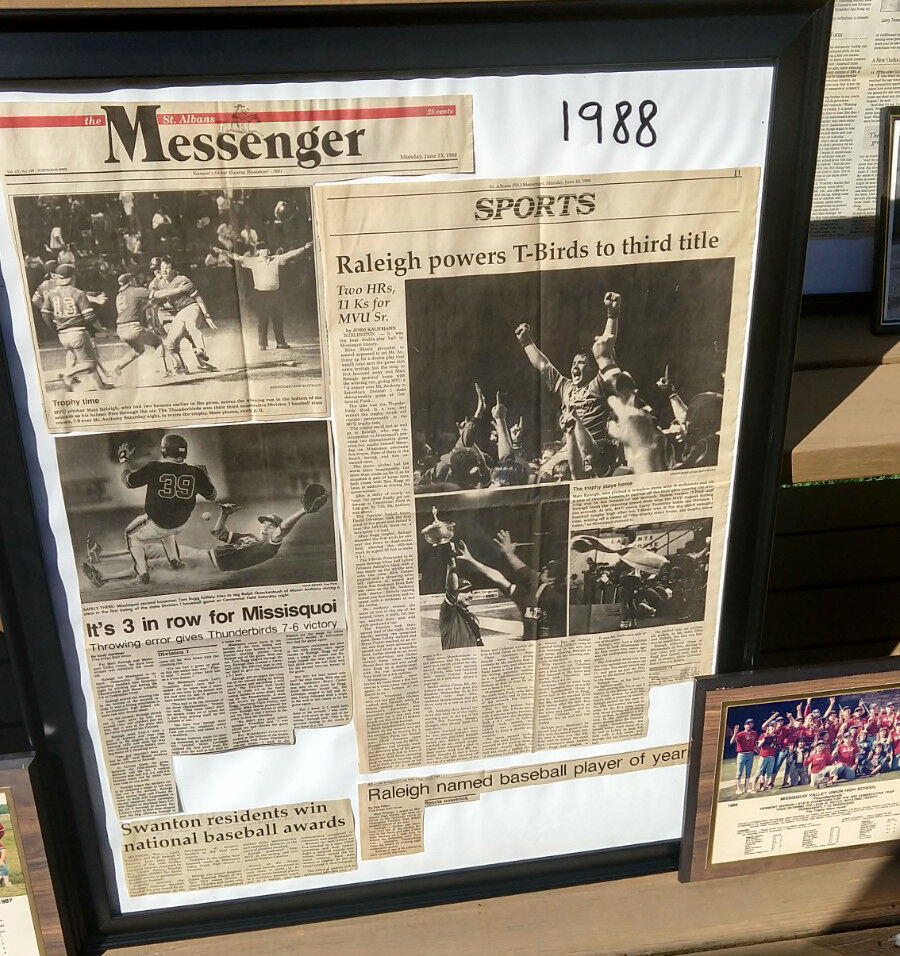 Trombley’s display of newspaper clippings from the 1988 DI title three-peat.

Trombley’s display of newspaper clippings from the 1988 DI title three-peat.

BURLINGTON — In 1988, Trombley and the T-Birds took the field, having graduated Todd Raleigh, Patt Bose, and Martin Rikert. Matt Raleigh, now a senior, had one more opportunity to win a title.

“I had lost a lot of that powerhouse team from the two years before,” said Trombley, looking over a framed photo of the teams.

“I had Matt and I had guys come out like Tom Rugg. He hadn’t played baseball since junior high, but he was good in Little League,” explained Trombley.

“I also had two veteran outfielders in Jeff Lyford and Chris Coleman. Chris Coleman was a terrific baseball player who had grown up a few houses down the street from the Raleighs. He was a vocal leader on the team.

Talk of Matt Raleigh’s Little League days sidetracked the championship story but exemplified the power Matt possessed, even as a kid.

“Matt was a twelve-year-old, and he was playing in the state tournament. Bert Berthiaume (who’d been his coach during the regular season) was there watching with me,” said Trombley.

“Matt looked over at Bert from the on-deck circle and said, ‘watch this, Bert.’ He came up to the plate and hit a grand slam, home run over the fence!”

At the halfway point of the ‘88 season, the Thunderbirds were 3-5.

“We had gotten beat a lot of different ways,” said Trombley, chuckling. “Matt got beat by Essex 9-1; he’d mowed over everyone that spring, but he just didn’t have it that day.

“We lost 6-1 to CVU, and they were terrible at the time. They had a pitcher whose pitch would sink because he couldn’t throw it hard enough to throw it in a straight line. We flailed away at that thing, but we couldn’t do anything with it,” said Trombley.

“After we got back to the locker room that day, the guys had a player’s only meeting. They were so proud of that, and I was glad they did it.”

After the meeting, the team won twelve straight games and a third title.

“The title game was all Matt Raleigh,” said Trombley, candidly. “As Al Plante, the coach of Mount Anthony said, ‘one guy shouldn’t beat you, but he did.’”

Mount Anthony, the No. 2 seed, had a fabulous team in ‘88, according to Trombley. Essex, the number one seed, was knocked out by Spaulding in the quarterfinals.

The Thunderbirds faced Spaulding in Barre for the semifinal. Trombley recalled Matt Raliegh walking in with his bag before the semifinal game.

The Spaulding player’s response was not favorable and for good reason.

“When you saw Matt Raleigh staring down at you, 230 pounds and 5’11 with those huge hands, it was pretty crazy,” said Trombley, chuckling.

“I remember the first game of the year against BFA. Seeing Matt on the mound, throwing as hard as he did, was scary. He completely overmatched some of the teams we played. They didn’t have a chance.”

Mount Anthony had given the Thunderbirds a good game in the ‘87 semifinals, and in ‘88, they were ready for a title, returning most of their team from the previous year.

“They had a kid named Davy Levecque, who was their leadoff hitter. First pitch of the game, he hits a 395 foot home run off Matt. That was a shot!” said Trombley.

“I’m watching Levecque round the bases, and I look at Matt. He’s picking the mud off his cleats. He struck out the next three guys,” said Trombley, chuckling.

In the bottom of the first inning, with one man on, Raleigh hit a homer of his own, over the 410-foot mark in center field.

“We weren’t behind anymore!” said Trombley with a grin.

The teams traded the lead, as Trombley’s ‘patched together’ group of sophomores and upperclassmen battled the stacked Mount Anthony team.

“Chris Feeley was a sophomore that year and was our shortstop when Matt was pitching. Rugg was playing second but hadn’t played since junior high. But we’d been winning!”

A few defensive errors let Mount Anthony back in the game, and the momentum swung back and forth.

Raleigh came to the plate in the fifth with a man on and MVU down by one.

“Matt hit a line drive that never sank. It just zoomed right out of the park. I haven’t seen a ball hit much harder than that. You just couldn’t believe it,” said Trombley. “Everyone was just stunned.”

In the bottom of the seventh, Raleigh singled.

“The Raleighs could hit the ball so hard, that even when they hit a ground ball, it could rarely be fielded,” said Trombley.

The single put Raleigh on first, but he immediately stole second. The next batter walked; MVU had men on first and second with one out in a game tied at 6-6 in the bottom of the seventh.

“We were finally the home team, after two years,” said Trombley, smiling.

Mike Skeels (who in the semi-final at Spaulding hit two grand slam home runs and a bases-loaded double for 10 rbi’s) hit a hard ground ball to second.

The Mount Anthony second baseman, Davy Leveque, flipped the ball to the shortstop Shawn Lalley, but his throw landed ten feet in front of first base.

“Matt scored from second, and the game was over,” said Trombley.

The team hoisted Matt on their shoulders in celebration, and the Leon W. Royce Rotating trophy was permanently retired to MVU.

In the ‘88 game, it was Matt Raleigh who will be remembered as the hometown hero who did it all.

“Matt’s accomplishments in that game were just incredible. He struck out eleven, pitched a four-hitter, and hit two home runs. He had four RBI’sI and scored the winning run in the bottom of the seventh,” said Trombley.

“He was a big, hulking man, but he was fast, and he was a great baserunner.”

At the end of the season, Raleigh was awarded the Vermont Gatorade Baseball Player of the Year, and Trombley received the National Amateur Coach of the Year award.

“Along the way, there were so many moments when things could have gone so differently,” said Trombley, reflecting on the three-peat.

“Of the 13 playoff games in that three-year run, eleven of the games were decided by one run. All of the finals games were one-run games.”

The three-title run truly defined the late 80s as a golden age for baseball at MVU.

“No one in Division I had ever won three titles in a row, and no one has done it since,” said Trombley. “That’s quite an accomplishment.”

"No one in Division I had ever won three titles in a row, and no one has done it since. That's quite an accomplishment.”