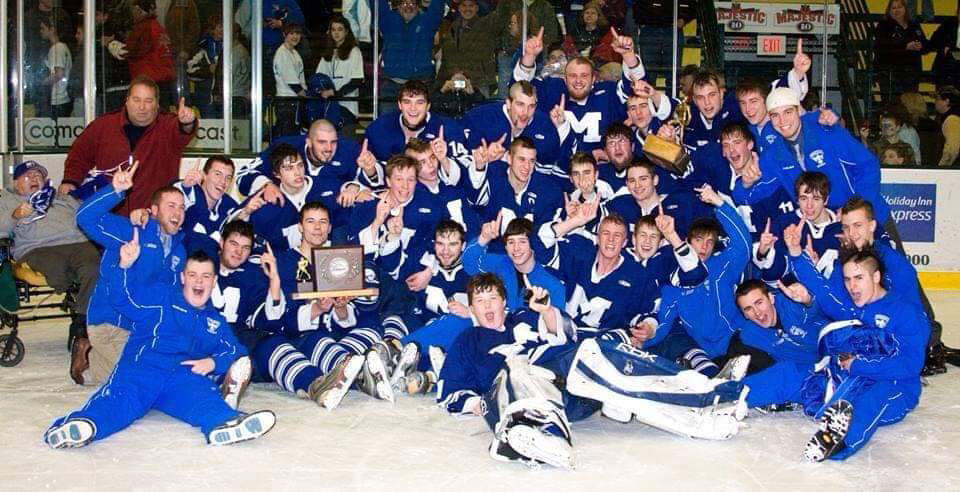 The 2010 DII state champion MVU Thunderbirds celebrate on the ice at Gutterson. 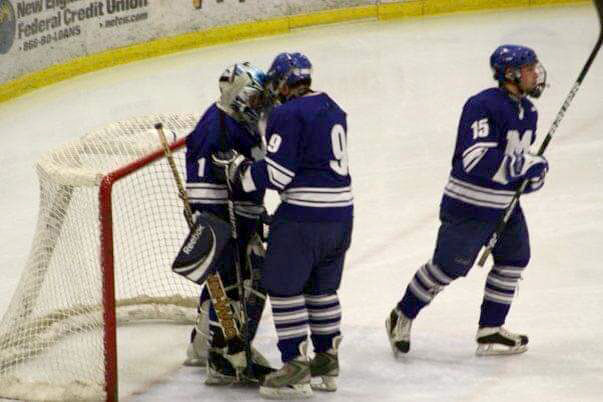 Adam Fortin (9) headbumps his brother Brian (in net) between periods in the DII title game at Gutterson. 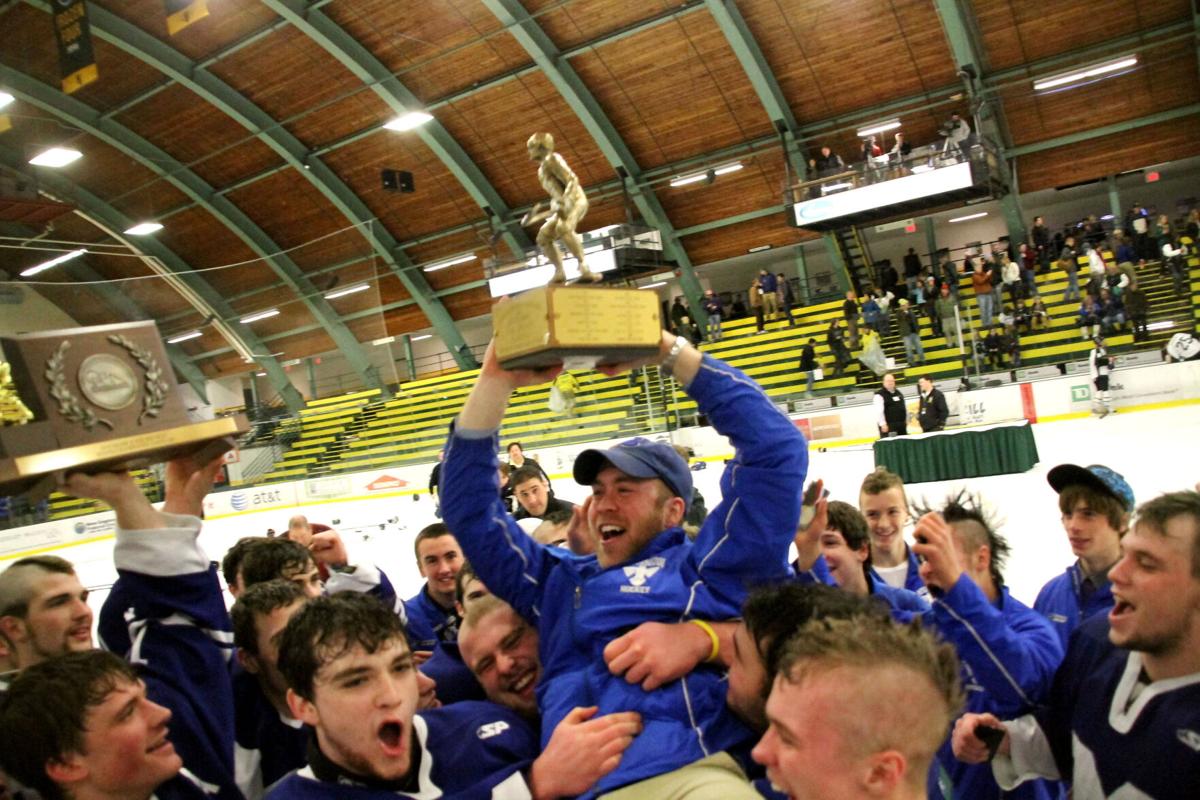 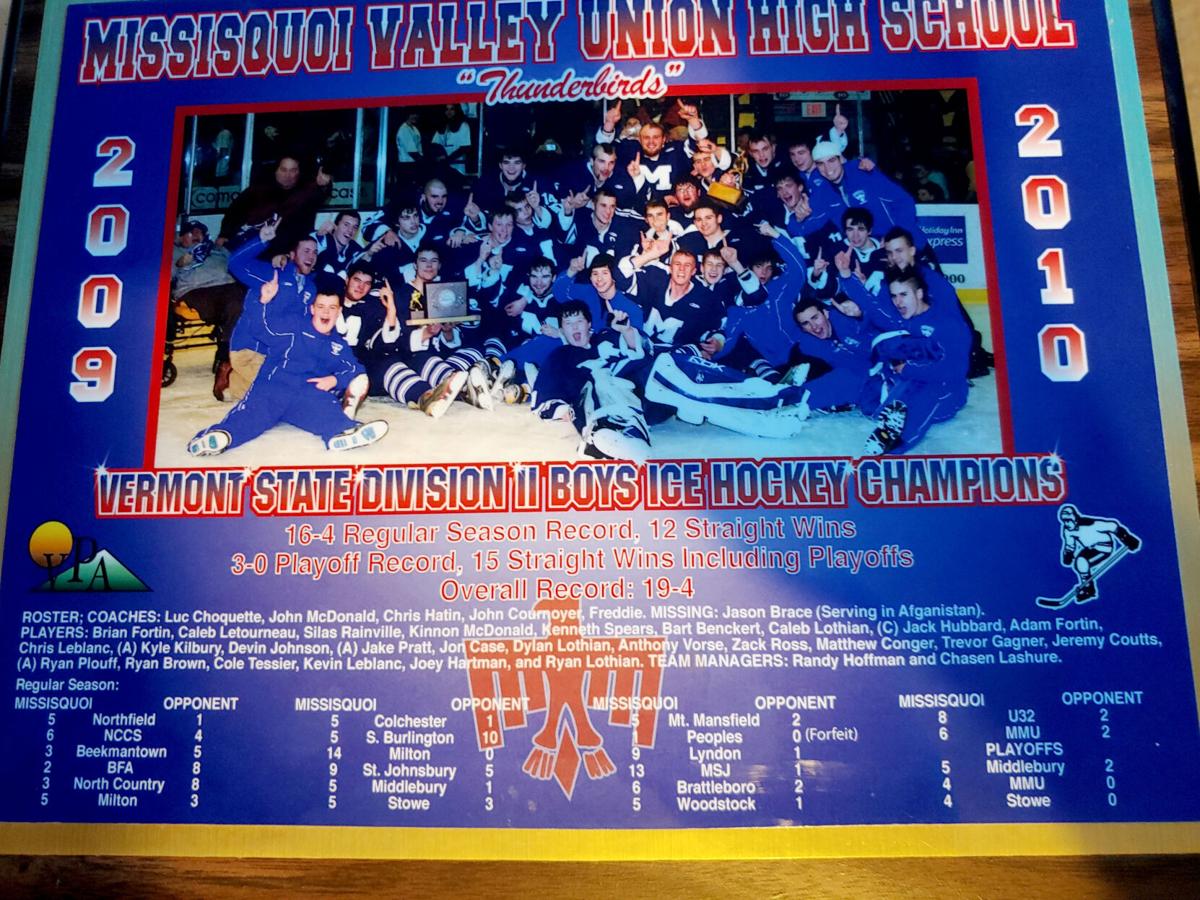 The championship plaque displays the names of the Fortins’ teammates and details on the season.

HIGHGATE — Adam and Brian Fortin’s excitement was tangible as they recalled the Unforgettable Game they shared ten years ago.

The brothers were members of the 2010 MVU DII state championship boys’ hockey team, who upset the Stowe Raiders (No. 1) and brought the first boys’ hockey title to MVU (No. 2).

“That season, Stowe had the better record, but we had beaten everyone in our division, including them, and gone undefeated in DII,” explained Adam.

The Thunderbirds were flying high, having lost their last game in 2009 to DI South Burlington in the Colchester Holiday Tournament by a score of 10-5.

“When we played the championship game, we were 15-0 in DII,” said Adam. “We had talked all season about how great it was that we had won all these games, but we had a lot of pressure. It’s hard to keep that going.”

The brothers recalled an article that billed the T-Birds as the underdogs in the 2010 state tournament.

“We felt we were the better team. We were averaging 6 to7 goals a game, and we were 1 and 2 in terms of goals against. Our defense was ridiculous,” said Adam.

When the Thunderbirds made it to Gutterson, they rolled through the semifinal game, earning a 4-0 win over MMU.

“We had one of the deepest teams MVU has ever had. I’ve never seen a team roll three lines with three sets of D, and we could out-skate other teams,” said Adam.

The brothers recalled that there were only a handful of games MVU didn’t score first that year, but both teams left the ice scoreless after the first period of the title game against Stowe, MVU being outshot 9-4.

“There was this sigh of relief after Jake Hubbard scored the first goal 14 seconds into the second period,” said Adam.

At the end of the second period, Kinnon McDonald scored for MVU, just before the T-Birds got into penalty trouble and had to kill off a 5 on 3.

“I made one of the best saves of my high school career in that game,” said Brian.

“I went diving over the crease to make a save on the power play. I was so zoned in; nothing was getting by me!”

Silas Rainville and Jon Case tacked on two more goals in the third, but MVU was still only scoring on 20 percent of their shots.

“Even though we were getting out shot, we were calm and confident,” said Adam.

Adam, accustomed to being an integral part of the team, spent the last two minutes of the game in the penalty box with his teammate, Kyle Kilbury.

“It was kind of nice to hear the crowd when the final buzzer went off. I got to see it all unfold in front of me,” said Adam.

Brian, who spent the game in goal, shared his memories of the evening.

“Before every period, my brother would come over to me and head bump me. I remember him telling me, ‘15 minutes left.’ That was one of my favorite moments,” said Brian.

“I remember, too, when I made that big save, and the crowd gave me a standing ovation. That was amazing!”

While Adam was in the penalty box at the end of the game, Brian was in net with his freshman defenseman Caleb Lothian in front of him.

“When we had five seconds left, Caleb and I had already thrown our gloves. I remember him throwing his stick in the air. It was awesome!”

Brian finished the game with a 23 save shut out for the Thunderbirds.

The boys’ hockey team wasn’t the only team competing for titles in the 2009-2010 seasons.

“We were in a Golden Age of athletics at MVU. From the fall of 2009 to the spring of 2011, MVU had four championships and six championship appearances in four different sports on the boys’ side,” said Adam.

“We had the St. Amours, Fourniers, and Lumsdens on the baseball and basketball team. Kyle Lumsden and Ben Fournier won three championships.

“Hockey was the first to get the title in that group, and it was really cool to be part of that group of athletes.”

Success doesn’t usually come without effort, and the boys on the hockey team embraced that reality.

The team had graduated one senior after the 2009 season; a large group of seniors returned.

“We didn’t think we were guaranteed a championship, but we knew it was in the realm of possibility. We had confidence going in, and it fueled us to work!” said Adam.

The team faced adversity early in the season; Jason Brace, head coach of the team, was deployed to Afghanistan.

“We all got patches for the National Guard for our jerseys. Luke Choquette stepped in and did an amazing job; he prepared us to skate with any team,” said Adam.

“Luke was an MVU alumnus, and that championship was really cool for him,” added Brian, a junior during the 2010 season.

Along with the coaching change, the team also decided to affect a cultural change.

“In the past, the program had been viewed as ‘goon hockey’, and officials were always watching us,” said Adam.

“We were at the front line of the thinking that it wasn’t all about who could be the most physically imposing; we were focusing more on being a skilled team.”

The Fortins thanked the MVU faithful for their unwavering support during the season.

“The crowd was amazing. At Gutterson, we filled over half of the arena, and our basketball team had a semifinal game the same night. The sound from that crowd was like nothing I’ve ever been part of,” said Brian.

“And during that January and February run, we were filling the Highgate Arena every night.”

For Adam, a senior at the time, the camaraderie and selflessness on the team was unmatched.

“We had a team meeting at the beginning of the season to commit to the season. We knew the group would be special!” said Adam.

“There were 27 guys on the team, and all but one player scored that year. The players who didn’t dress rotated in. We were very competitive, but we cared about everyone.

“Guys who didn’t play had just as much of a role as those who did. That was Luke Choquette’s thing. Everyone had a job, and if they did their job, we’d be good. No one thought they were better than anyone else.”

The 2019-2020 season marked the tenth anniversary of MVU’s first boys’ hockey title; it was also the year Brian took over as head coach of the MVU girls’ varsity hockey team. Adam and their sister Caitlin assisted.

“We’re hoping to see a similar group come up at MVU, whether it’s boys or girls. We’re trying to use our experience to motivate players to strive for that,” said Adam.

“Ten years ago, I don’t remember people talking about who had the most goals or the most points. We had guys like Kyle Kilbury (60 points, including 30 goals), who had really solid seasons, but everyone was talking about how we were scoring 4 to 5 goals and not giving up more than 1 or 2.

“That team was really special. I watch a lot of sports, and I’m a little biased, but I’d say that was probably one of the greatest teams MVU has seen in its history.

“On top of all of that, I got to play with my brother! We still talk about how we mopped the floor with everyone. It was one of my favorite years!”

"Before every period, my brother would come over to me and head bump me. I remember him telling me, '15 minutes left.' That was one of my favorite moments."

"We were in a Golden Age of athletics at MVU...Hockey was the first to get the title in that group, and it was really cool to be part of that group of athletes."