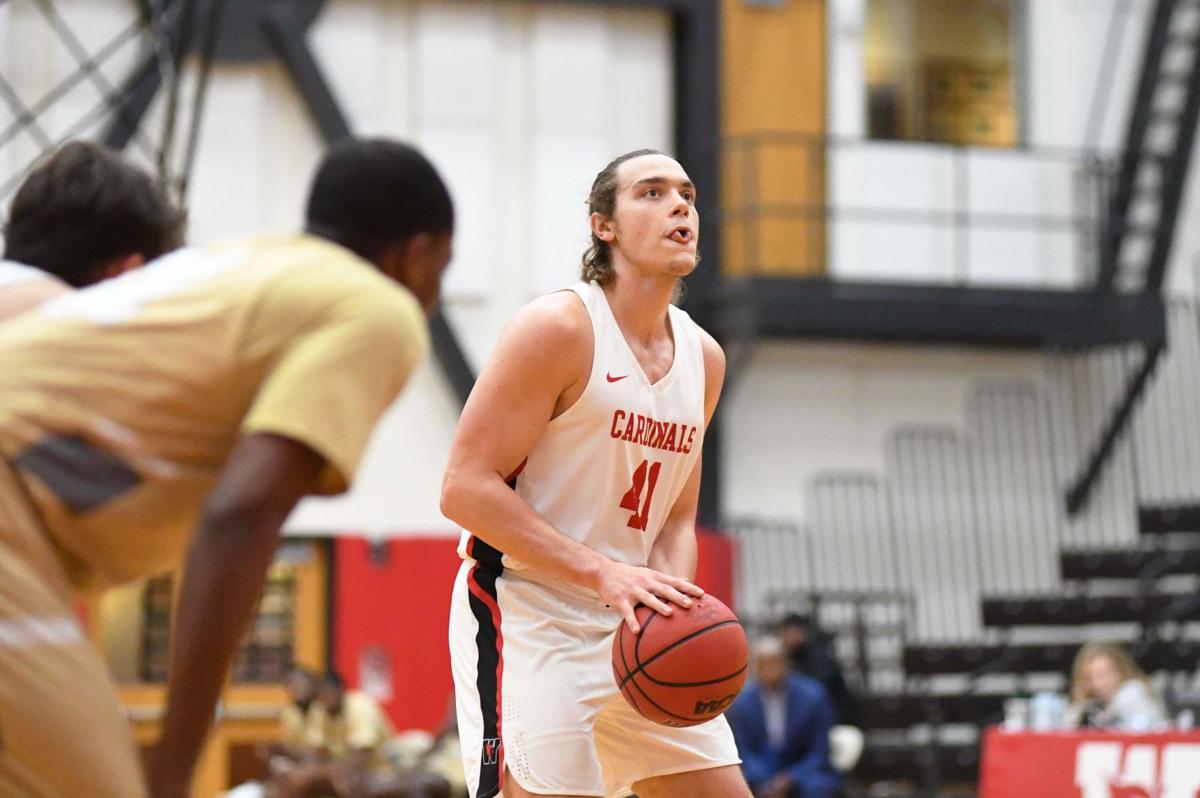 Jens Ulrich-Verderber prepares for a free throw during a game with the Cardinals. 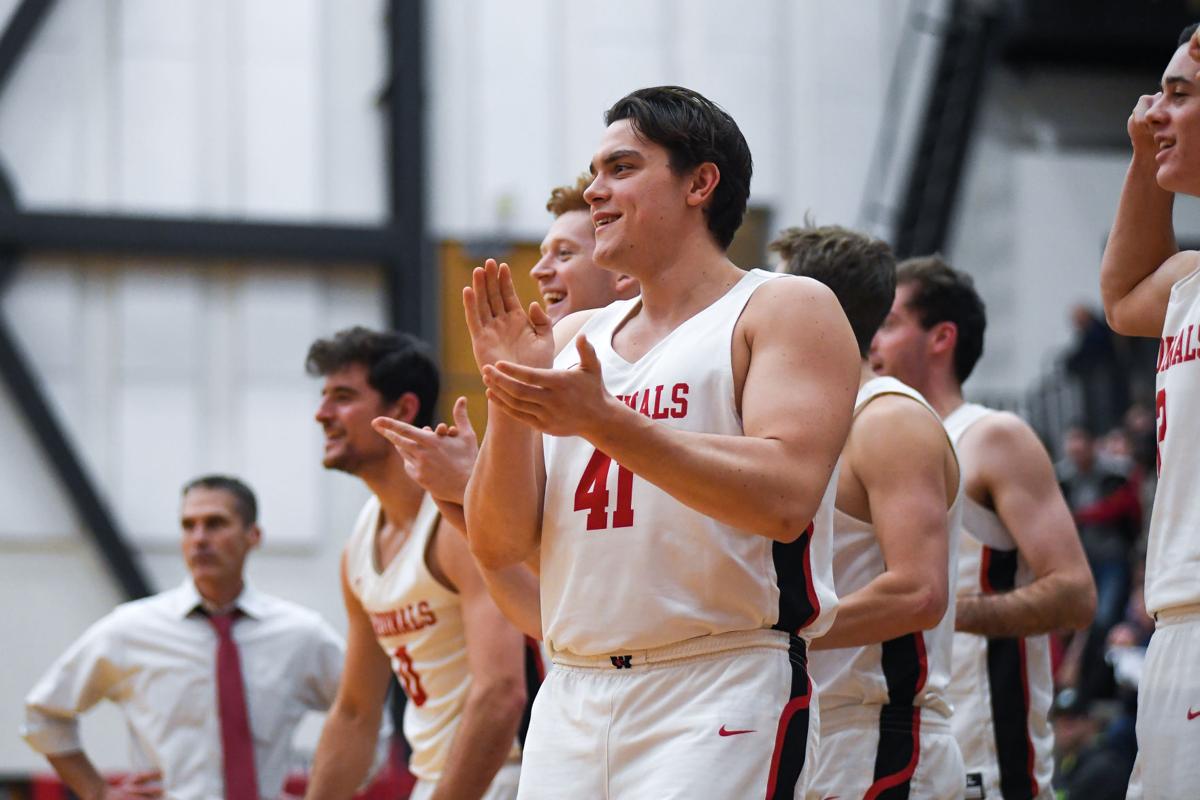 Jens Ulrich-Verderber cheers for his teammates during a college game. 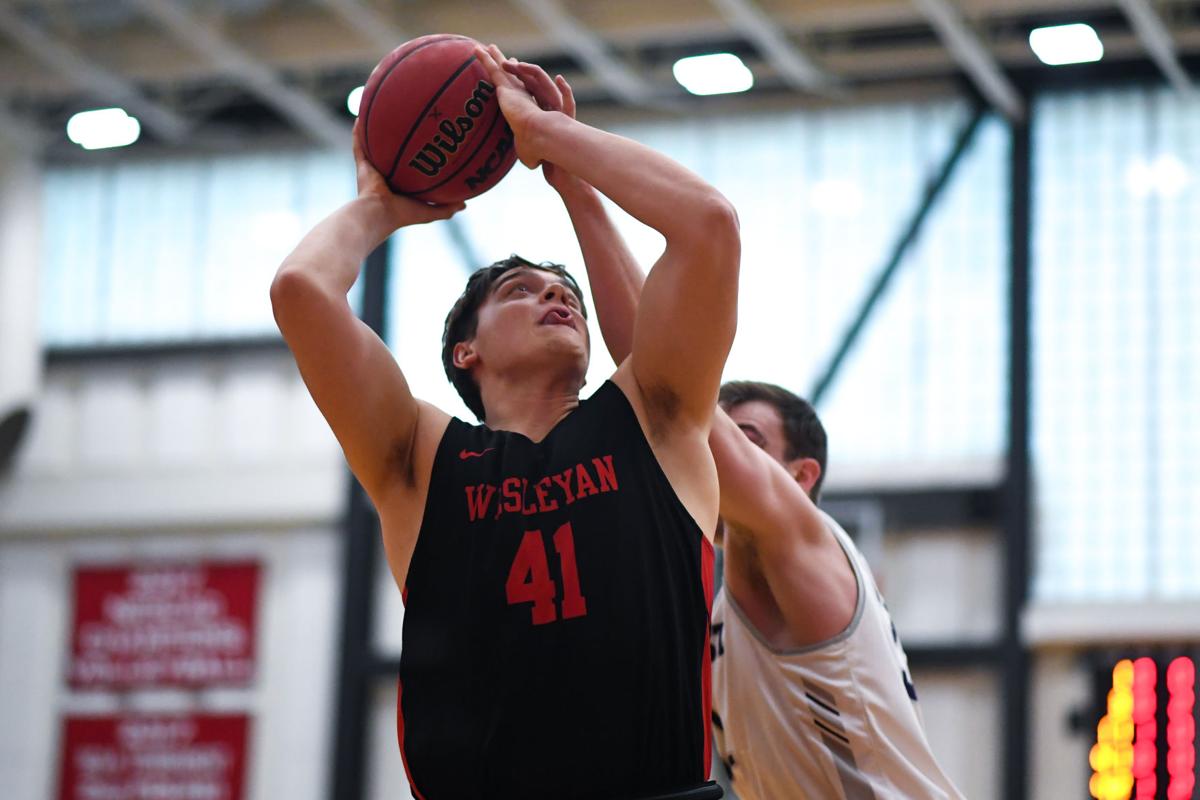 Jens goes up for a shot in during a game against Amherst. 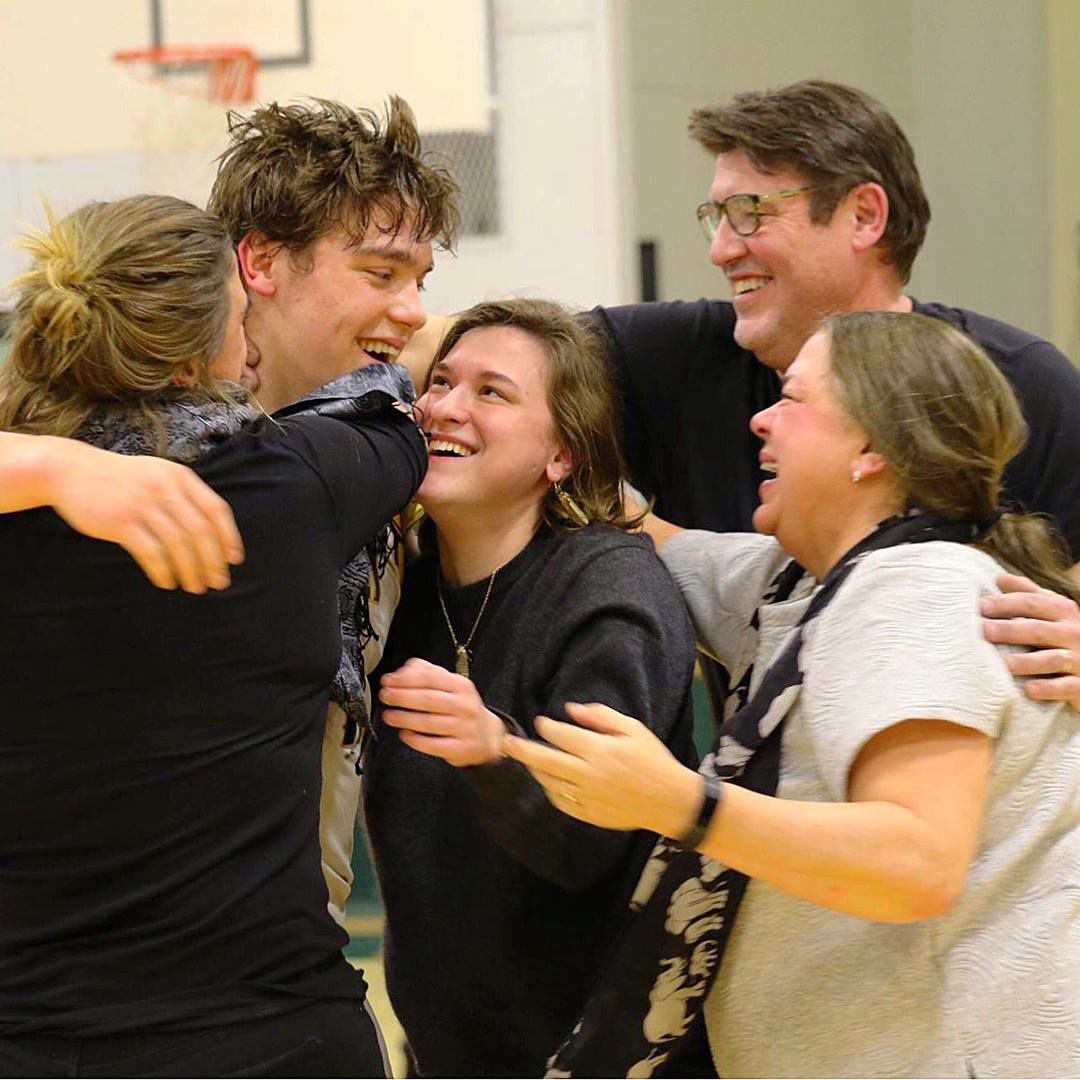 Jens Ulrich-Verderber celebrates his 1,000th point at BFA St. Albans with his family. 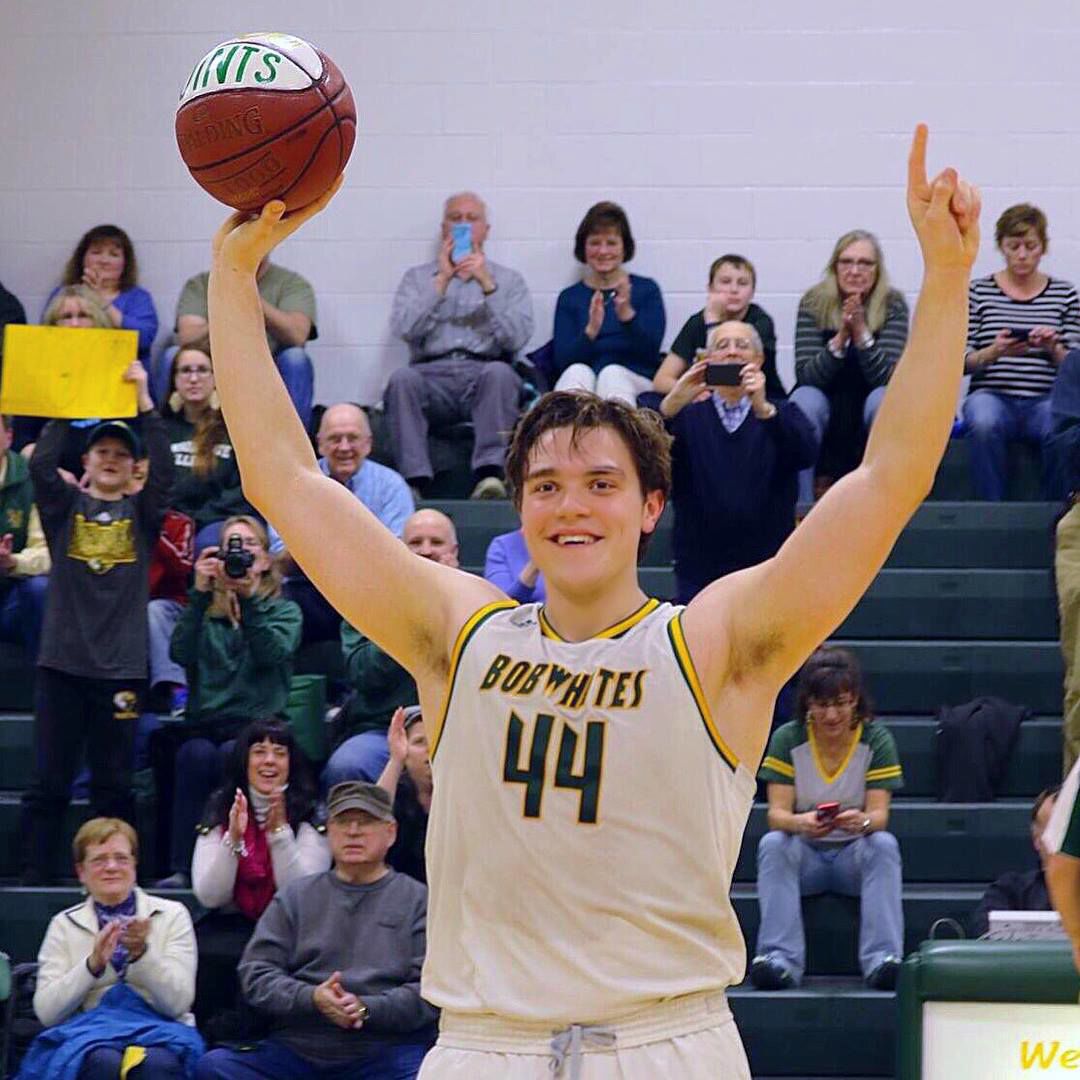 Jens Ulrich-Verderber raises the 1,000 point ball into the air after hitting the milestone during his senior year. 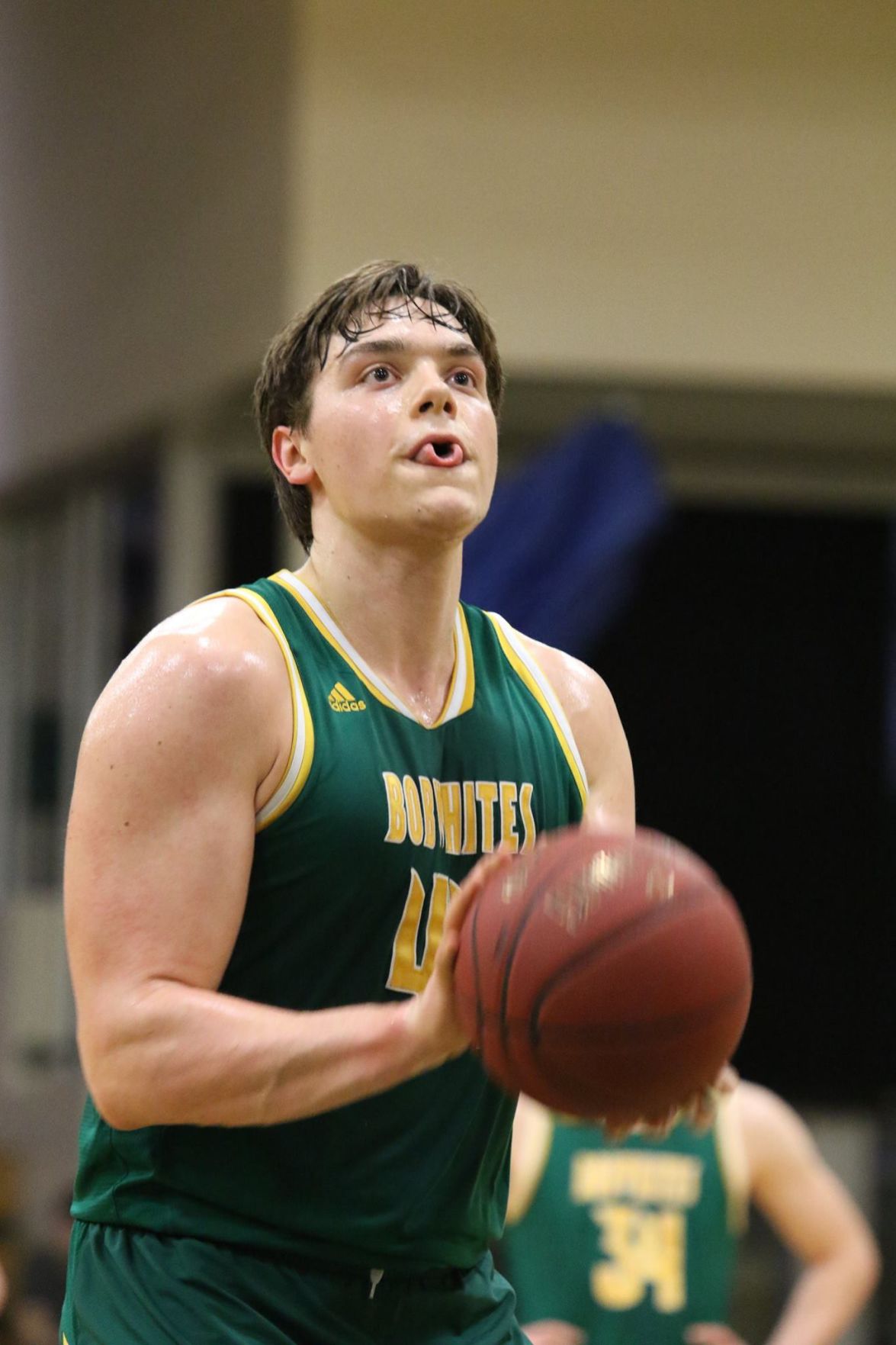 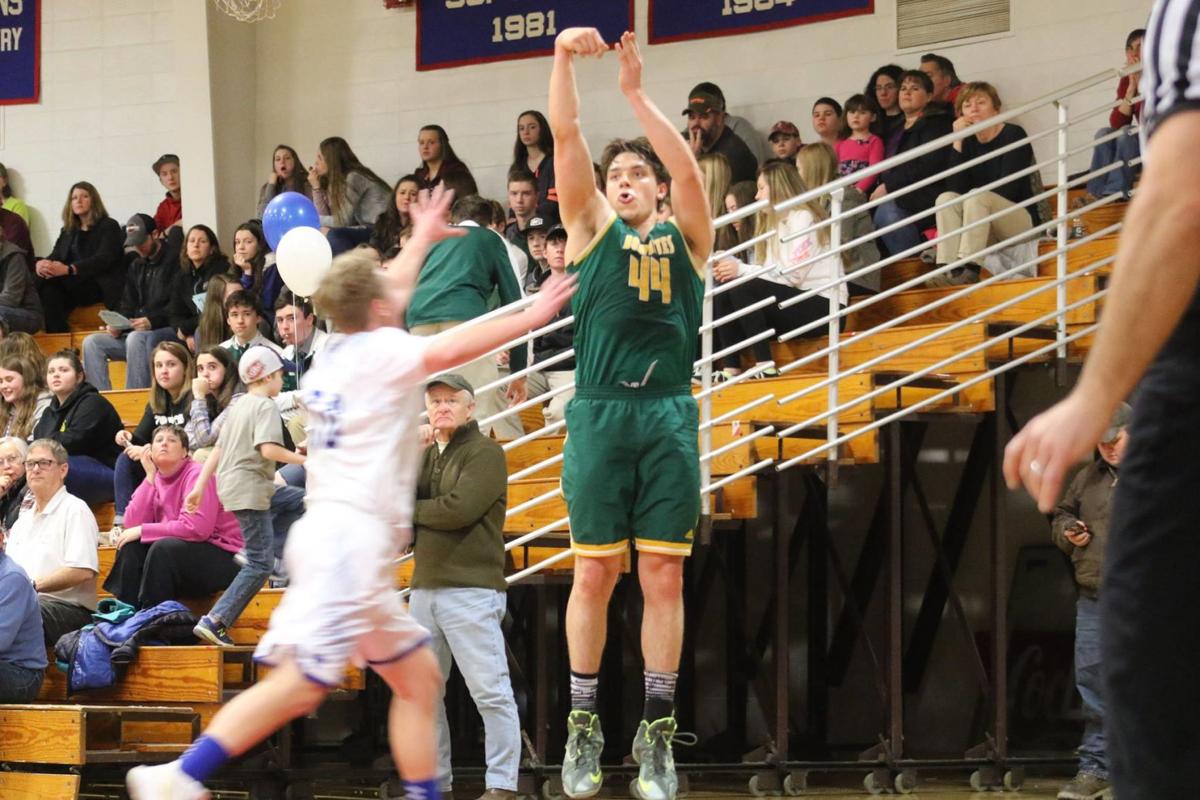 Jens Ulrich-Verderber prepares for a free throw during a game with the Cardinals.

Jens Ulrich-Verderber cheers for his teammates during a college game.

Jens goes up for a shot in during a game against Amherst.

Jens Ulrich-Verderber celebrates his 1,000th point at BFA St. Albans with his family.

Jens Ulrich-Verderber raises the 1,000 point ball into the air after hitting the milestone during his senior year.

ST. ALBANS — The night that Jens Ulrich-Verderber scored his 1,000th point for the Bobwhites was one to remember.

The senior forward glowed with gratitude, a quality he possesses that’s helped him grow as an athlete and a person.

“That moment was super rewarding. The significance of that for me was that so many people were really interested,” said Ulrich-Verderber. “It was a great community moment.

“Everyone was passing around 1,000 point posters; I had no idea they were going to do that. I appreciated the outpouring of support.”

After graduation in 2018, Ulrich-Verderber went on to Wesleyan University in Middleton, Conn. He’s a sophomore this year, and he’s working hard on his academics and his basketball.

It was through his Vermont travel team, Lone Wolf, that Ulrich-Verderber heard about the school.

“I found this community and college through basketball,” said Ulrich-Verderber. “When I visited to check out the basketball team, I found that the culture on the team and the campus was interesting.”

Currently, Ulrich-Verderber is studying for a double major in government and psychology.

“Wesleyan has allowed me to test a lot of different waters,” said Ulrich-Verderber. “Government and psychology are great avenues that are interesting and engaging.”

“I’ve been thriving with academics and athletics,” said Ulrich-Verderber. “I’ve got two to three hours of rigorous activity with basketball each day. When it comes to class, I need to be engaged. The balance makes things easier for me.”

Ulrich-Verderber has embraced the routine and found that it’s helped him manage his time wisely.

“In high school, you’re in class for seven hours a day. In college, you can space out your classes,” said Ulrich-Verderber. “I take advantage of that, and I’ve learned to use it well.”

On the basketball side, Ulrich-Verderber has also had plenty of opportunities to grow.

“In high school, you’re trying to get to this level, and you’re always looking to improve yourself and demonstrate what you can do. In college, you’ve made it to that level, and you need to fit into the team.”

Ulrich-Verderber noted in a Vermont high school, college basketball players, even at the DIII level, can be rare; outside of the Green Mountain State, the competition gets stiffer.

“I have teammates who have friends in the NBA right now,” said Ulrich-Verderber. “They have played at a high end, and transitioning for them wasn’t as hard.”

Ulrich-Verderber noted that after working for four years to be a leader on his high school team, it was challenging at first to start the process all over again.

“Some could get discouraged; it can be tough on your perception of yourself,” said Ulrich-Verderber.

“You know you’ve worked to be here, and it’s part of the learning process. Once you accept that, you know it’s not bad to be a learner again. It can be refreshing.”

Reflecting on his freshman season, Ulrich Verderber recalled his role with the team.

“I played toward the end of games last year. It was exciting, and I wanted to do everything right.”

He specifically remembered a game against a conference rival; he was guarding a muscular, 6’8” opponent.

“I’ve worked a lot on strength, and that allowed me to play meaningful minutes on this big guy,” said Ulrich-Verderber.

“From that moment, I went from being an unspecific defensive guy to having a legitimate role on the team.”

This season the Cardinals have eight underclassmen on the roster.

“We’re young and learning to play together. I’ve found a good role on the team, and I feel like part of the system,” said Ulrich-Verderber.

“It’s not about personal points--it’s about the team, doing well offensively and defensively. You think outside yourself, and that’s when it’s the most rewarding.”

“Jens is a high character young man who is excelling on our campus. Here at Wesleyan University, it is more than just winning basketball games and players having impressive statistics.

“Our players are building habits and a skill set that can help them succeed far beyond their four year basketball experience. Jen’s is attacking every aspect of the college experience…on the court, in the classroom, and on campus engaged with our community.”

Ulrich-Verderber’s high school days aren’t so far behind him that he can’t recall the ‘stuff’ that made them special.

“There was so much support from community members and teachers who were fans of basketball, but I didn’t realize how much they were cheering for us as individuals,” said Ulrich-Verderber.

“I loved having people I didn’t really know come up to me in the grocery store and ask me about games and future plans.

“People are genuinely interested and want to know, even now, how I’m doing when I come home.”

“Mr. Marlow was always there, giving great advice. Through his leadership, I learned a lot about what college coaches would expect.

“He was a big proponent of doing just a little bit more. That was helpful going into college athletics,” said Ulrich-Verderber. “You have to push yourself a little bit harder.”

Ulrich-Verderber also had lots of good advice from his father, Chuck Verderber, who played for the University of Kentucky and was drafted in the seventh round by the Chicago Bulls.

“A lot of people would think with my Dad was a big proponent of basketball, but if I’d ever said I didn’t want to play, there was no pressure whatsoever.”

“He was always super helpful. When he knew that I wanted to play at the next level, he started giving me some great advice,” said Ulrich-Verderber.

“He didn’t want to pressure me because he wanted me to enjoy the game.”

Ulrich-Verderber encouraged others to find something they love and to pursue it.

“It’s all about finding what helps you develop as a person and what’s satisfying to you,” said Ulrich-Verderber.

“Athletics teach you a lot about yourself and others, and you can develop the good habits of discipline and mental toughness--skills that translate off the court.”

While he might spend the school year in Connecticut, Ulrich-Verderber always enjoys getting back to Franklin County.

“When you go to college, you develop a newfound appreciation for home, and I always look forward to coming home.”