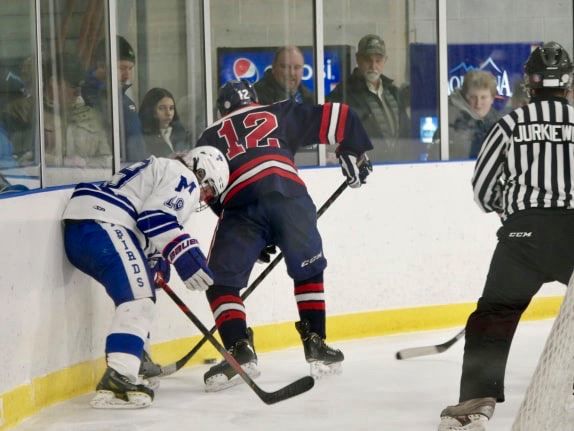 Hunter Mason battles a Hartford player for the puck in Wednesday’s game. 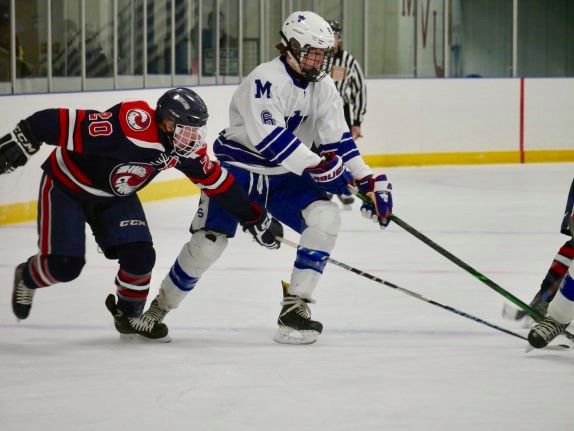 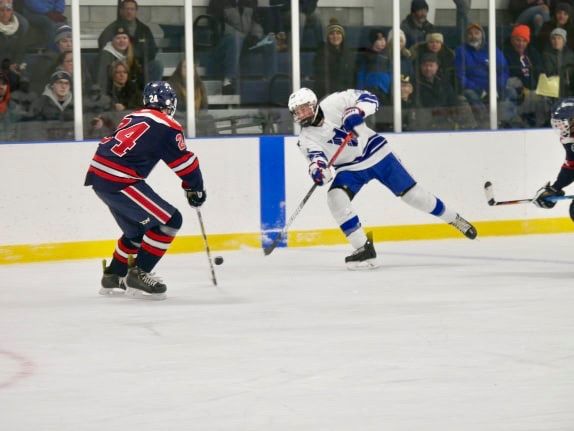 Corbin Schreindorfer prepares to pass in Wednesday’s game against the Hartford Hurricanes.

Hunter Mason battles a Hartford player for the puck in Wednesday’s game.

Corbin Schreindorfer prepares to pass in Wednesday’s game against the Hartford Hurricanes.

SWANTON — A first period goal by Hartford’s Blaine Gour was all the Hurricanes needed as they shutout the Thunderbirds 1-0 Wednesday night in Highgate.

“I was a little upset on their first goal,” commented MVU coach Chris Hatin. “Turns out for good reason, as it was the only one scored.We got caught standing around and flat footed.”

The first period had the T-Birds taking ten shots to Hartford’s two, but the Hurricanes had the better chances, including a breakaway shot going wide and a goal post among them.

It was late in the second period when MVU had their first good opportunity. The puck came to Hunter Mason who was all alone in the slot. Goalie Colby Boyce made the save with the puck dropping near the crease in Jackson Porter’s skates. Porter couldn’t kick it to his stick in time as Boyce covered.

Going into the last five minutes of the second, Hartford still only had two shots on goal. Then MVU goalie PJ Bouchard got busy. First he stopped a breakaway sliding to his left and then stopping a threat when Kyle Hamilton skated across the front of the crease and stuffed the big guy’s backhand.

Porter had a short handed breakaway as the period ran down but couldn’t connect.

The snake bitten Porter opened the third period with yet another short handed break away only to be denied by Boyce’s blocker. Then Charlie Gates’s point shot hit Boyce but Jake Benjamin and Mason couldn’t find the handle to finish.

MVU had their best chances to score while on the penalty kill. Late in the third, Porter set up Mason on the face off dot and also had another partial break away. The unit of Gates, Kyle Gilbert, Porter, and Mason made it look like MVU had the man advantage.

“These guys have the green light,” added Hatin. “If we gave a player of the game, Jackson would have been it. He works so hard--really wants it. He shows the team what they should be doing every shift.”

Boyce held the fort the rest of the way earning the 30 save shutout.

“The 12 shots they had didn’t reflect the kind of game it was,” explained Hatin. “PJ was in good position all night forcing them to try and pick a corner.”

There were very few, if any, saves by Boyce that were over his waist. Should the shots have been around the crossbar?

“We leave that up to the creativity of the players,” replied Hatin. “We trust them to find the hole for the best chance to score. We just couldn’t find one tonight. A lot of it has to do with anticipation and getting to the net before the shot is taken. That was a weak point in this game as we didn’t have those second and third chances.”

The loss puts 7-6-1 MVU in seventh spot just behind the 10-5-1 Hurricanes. The Thunderbirds do have six games left to try and gain ground on the teams ahead of them. One of those teams is Burr&Burton and they will be in Highgate Saturday afternoon.