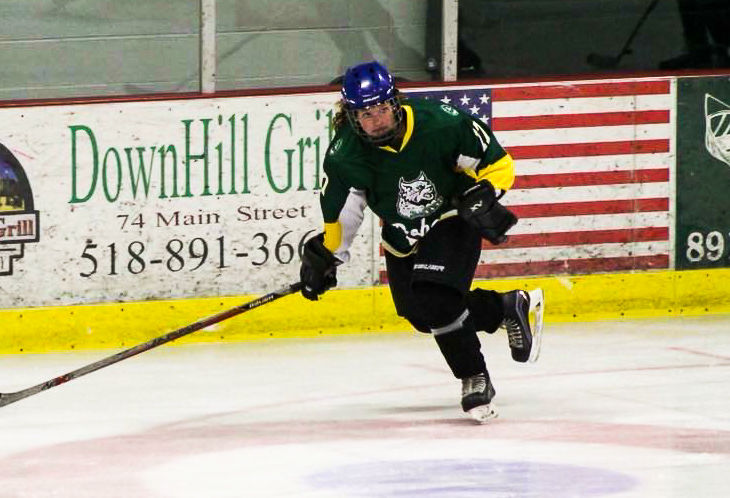 Caitlin Fortin skates with the Paul Smith’s College club hockey team. Fortin was the only girl to ever score with the men’s team and went on to help establish a women’s club hockey team this year. 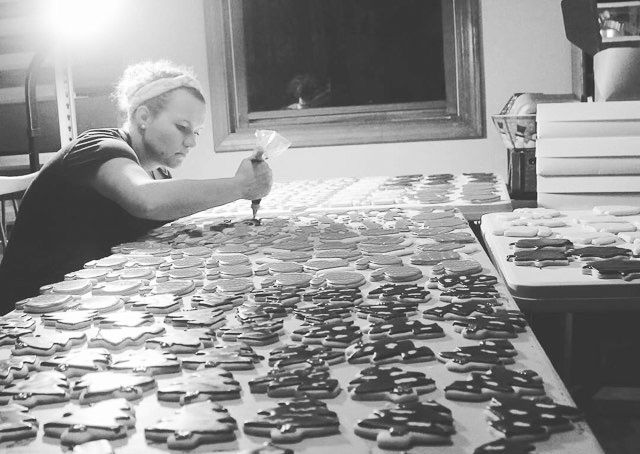 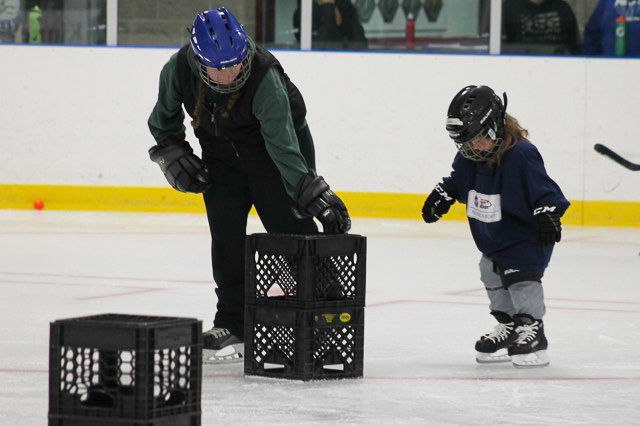 Caitlin Fortin helps out a young skater at the Highgate Arena.

Caitlin Fortin skates with the Paul Smith’s College club hockey team. Fortin was the only girl to ever score with the men’s team and went on to help establish a women’s club hockey team this year.

Caitlin Fortin helps out a young skater at the Highgate Arena.

Highgate — Caitlin Fortin grew up spending countless hours on the rink at the Highgate Arena, a place that became a second home for the Fortin family.

The youngest of three, Fortin grew up watching her older brothers Adam and Brian on the ice.

This year, Fortin will finish her senior year at Paul Smith's College, where she's earning a degree in Baking and Pastry with a minor in Business.

"Baking is an art to me, and my cookie cutter collection is insane," said Fortin with a warm smile.

With just six credits left to complete her degree, Fortin will finish her fall semester and take the next semester's courses online so she can pursue her passion for baking.

"I started watching Youtube videos and learned from there," said Fortin, who baked, decorated, and sold 80 dozen cookies from her baking room at home last year.

Fortin, who was ready to take her love of baking to the next level, agreed to rent and operate the bakery at the store.

When the school year began, Fortin put together a schedule that would allow her to keep doing all the things she loved.

On most weekends, Fortin returns home from college on Thursday. She stops into the bakery and gets a head start on the weekend baking.

She works through the weekend, taking breaks to play her own hockey games and to coach youth hockey.

Fortin has a passion for baking, but she also has another passion-the game of ice hockey.

"We just started our first women's team for Paul Smith's," said Fortin. "Last year I played on the guys club team, but this year we recruited enough girls for a team."

Fortin was the first girl to score a goal for a Paul Smith's men's club hockey team, scoring in a game last year against Oswego College.

This year, Fortin is serving as the captain and 'team mom' of the women's club team.

"We're trying to build this women's club team," said Fortin. "School has to come first, but hockey is a good break. That's why a lot of girls joined."

As much as she loves playing the game, Fortin also enjoys coaching.

"We just started a U10 girls' team with MAHA," said Fortin. "We've got a U8 team as well, for the girls, which is exciting."

Numbers for girls' hockey have been suffering in the state, and hockey programs have been looking for ways to increase interest in the game.

"A lot of the girls on the U10 team haven't played, but they're picking it up quickly," said Fortin. "I love to see the kids grow."

"Hockey is a social piece for girls," said Fortin. "They like to hang out with their friends. I'm not all about winning; I think it's important to have fun."

According to Fortin, this year's high school team at MVU is looking good. A state championship win in 2019 helped build enthusiasm for the team.

"That's a big boost for the program! Girls' hockey has always been big for me. I'm glad to see us building again."

Fortin also helps with the four-year-old skaters when she can.

"I began helping Bernie Trembley coach the T-blades when I was in the eighth grade," said Fortin. "When Bernie moved to Florida, I took it over."

"There are always tears and snow angels, but Bernie taught me how to focus and how to teach the kids to skate," said Fortin.

One of Fortin's specialties, sugar cookies, make their way to the rink. It's just one more way to keep the game fun.

"Hockey was fun for me! It was my place to go work as a team and learn about leadership."

Fortin thanked her mom Karen for setting a great example of how to juggle many things and succeed.

"My mom has been a huge role model. I've always seen her run the rink, raise a family, and travel with us for hockey. I don't know how she did it," said Fortin.

"Wynn was great! He was all about the team, and he was fun," said Fortin with a smile. "And he was so funny!"

Fortin and her team lost in the semifinal her senior year, but the loss isn't something she dwells on.

"You don't remember every game and the score. You remembered your team, who you played with, and who you had fun with. That's what I try to tell my players and their parents," said Fortin.

There's one game she does remember well, but it wasn't hers. In 2010, her brothers Adam and Brian were part of a state championship win with MVU.

"That was probably the best hockey memory my family has! Seeing the MVU support at Gutterson was insane! My brother was the goalie, and he ended up getting a shutout," said Fortin.

"I grew up with the guys on that team; they were my hockey family."

All the years of hard work on the rink helped Fortin develop an excellent work ethic.

"You go to practice, you go to your game, and you put as much effort into it as you can. I put that same effort into my job," said Fortin.

"Balancing a social life, bakery, school, and hockey is kind of crazy! It takes determination, and I learned that in hockey."

"Any sport builds a person. You learn how to work with others, you learn to communicate with other people, and you learn leadership. Those are basic skills that translate in life."