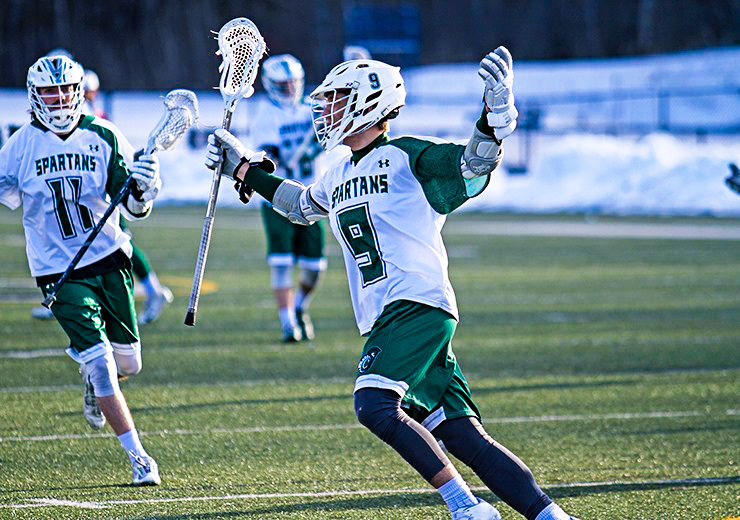 Cameron Russell celebrates a goal with his Castleton teammates. 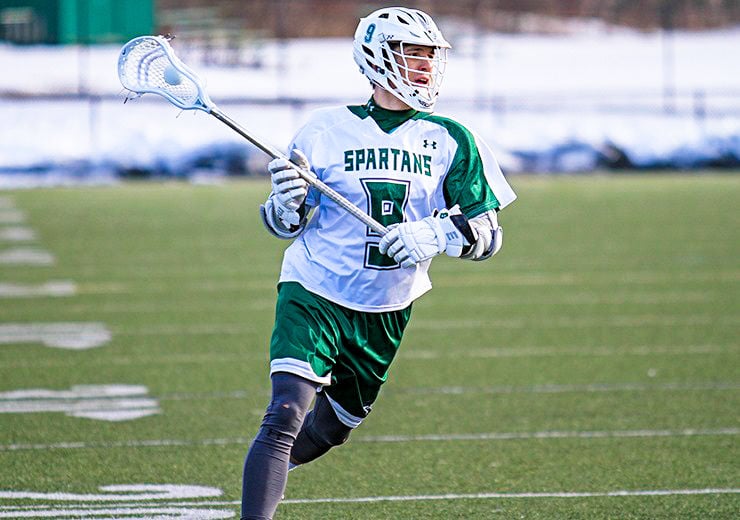 Cameron Russell celebrates a goal with his Castleton teammates.

Russell was prepared for another outstanding season in 2020 before COVID-19 closures sent college athletes home for the remainder of the season.

Accolades followed the excellent on-field performance in 2019. Russell was named Little East Conference Player of the Week, and he landed on the USILA Warrior/New Balance Division III National Team of the Week.

Durning that break-out week, Russell scored six goals against UMass Boston, including the game-tying and the eventual game-winning goal.

He went on to notch a hat trick and a game-winning goal in overtime against Eastern Connecticut.

After graduating from BFA in 2015, Russell took a year off to figure out what he wanted to do next.

During that time, he played junior hockey for the Vermont Lumber Jacks, traveling throughout New York and New England.

“It was one of the best years of my life. I focused on what I wanted to do in the future, played hockey, and kept my lacrosse skills sharp shooting balls at Hard’ack with my brother Cole,” said Russell.

Russell credits his older brother Cole as his most significant lacrosse influence.

“I watched Cole play at Johnson and Wales. That’s where I saw the level of play and decided I wanted to play at the college level. He was the one who always worked with me and pushed me along the way.”

Attending Castleton University was on Russell’s mind; he wanted a school with a small, tight community.

“I knew Castleton would allow me to pursue both my academics and my athletics. I had watched my brother do both, and I knew it was a big commitment.”

Russell took a trip to Castleton to catch a Spartan playoff game the spring before he enrolled.

“I knew some players on the team, and the assistant coach was Nohea King from St. Albans. I watched the game, and knew I could play for the team.”

Russell enrolled and began his collegiate career that fall; his first spring on the team, he was one of more than 15 freshmen on the lacrosse team.

“As the years went on, kids fell off. As a senior, there were only four of us left; we became a pretty tight group, and I made lifelong friends.”

Russell, like many college athletes, spent his first two years playing a position to which he wasn’t accustomed.

“As a junior, my coach gave me a shot on offense,” said Russell. “That was a big step for me, and I wanted to take advantage of it. My teammates worked well together, and I found a groove.”

During Russell’s time at Castleton, the school moved from the North Atlantic Conference to the highly competitive Little East Conference.

“That was a big step for us. I thought we did pretty well in my junior year. We missed playoffs by one game, and we played some close games. I was looking forward to playing some of those teams this season.”

This year, as a senior, Russel and the Spartans played four non-league games before the season came to an abrupt end.

“We had a rough start, but I thought our team would hit a certain point where we’d start clicking. The younger guys started playing well,” said Russell.

“I’d tell the guys that with lacrosse at the college level, it’s all about possessions and working hard for every ground ball. Don’t think that just because you lost to a team once, you’re going to lose to them again. You never know.

“We had a big freshman class and, I was looking forward to showing the guys what college lacrosse was about. It’s not just practices and games. There’s lifting, running, skill sessions, and wall ball, all outside of practice.

“You don’t get it until you get there, but it’s a lot of work to balance academics with a college sport.”

There was a smile in his voice as Russell reflected on his college years.

“College has a different feel. You’re playing for your team, for the guys next to you, and for the love of the game.

“I was undecided about playing hockey or lacrosse at the college level, but when I started competing and playing with these guys, it really did rekindle my love for the game.”

While the abrupt end to his senior year was sorely disappointing, Russell keeps another St. Albans lacrosse player on his mind.

During his time at Castleton, Russell helped carry on the Climb for Connor, an annual climb-a-thon to benefit the CJR Memorial Fund in conjunction with Norwich University.

The Climb for Connor, established in 2015, is held in memory of Connor Roberts, a Norwich lacrosse player who passed away from a sudden heart attack in June 2014, shortly after his sophomore year.

“When I think about Connor, who was a friend of my brothers, that always puts things in perspective.”