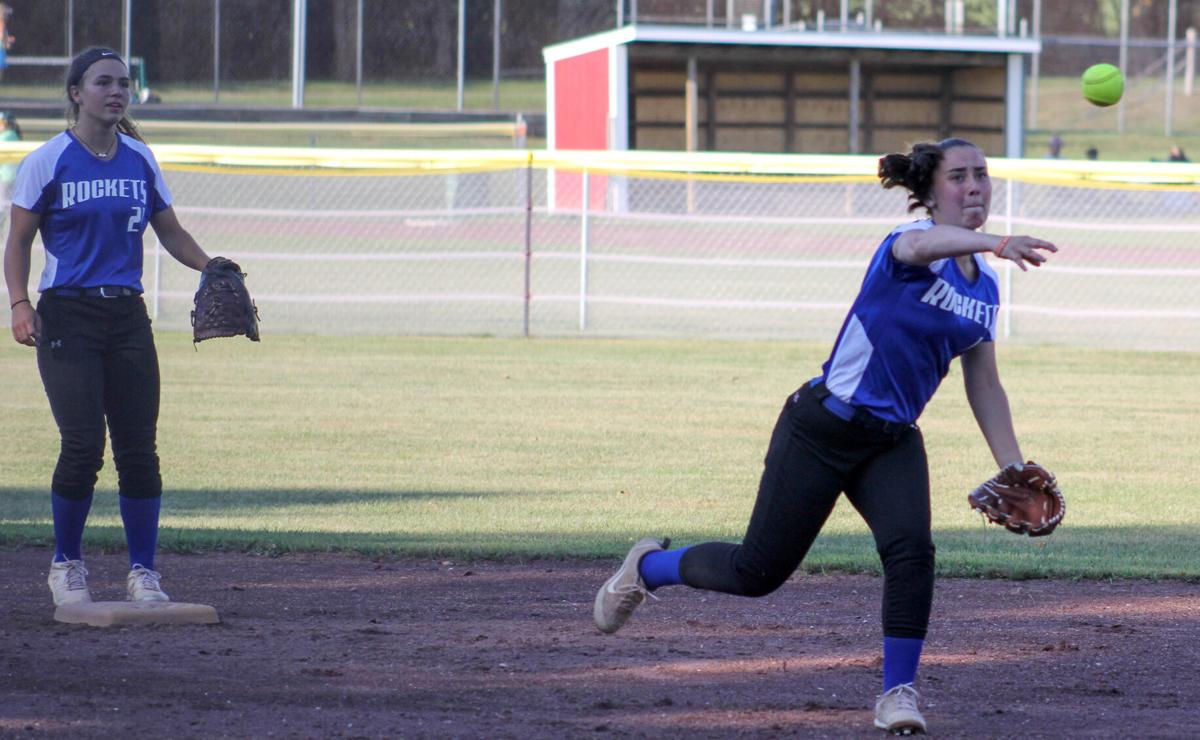 Emily Graham throws the ball in the U18 Rockets scrimmage against the U16 Rockets last week. May Gratton looks on. 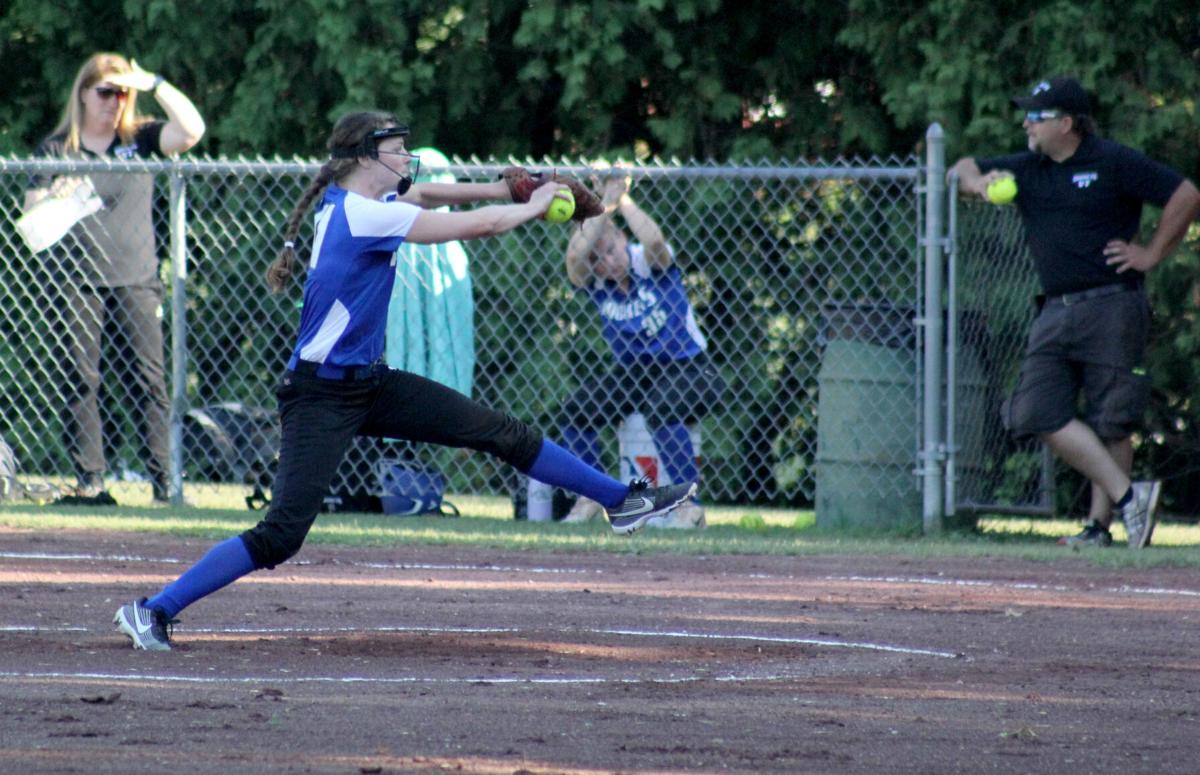 Caitlyn Dasaro pitches for the U18 Rockets last Wednesday at Georgia Beach. 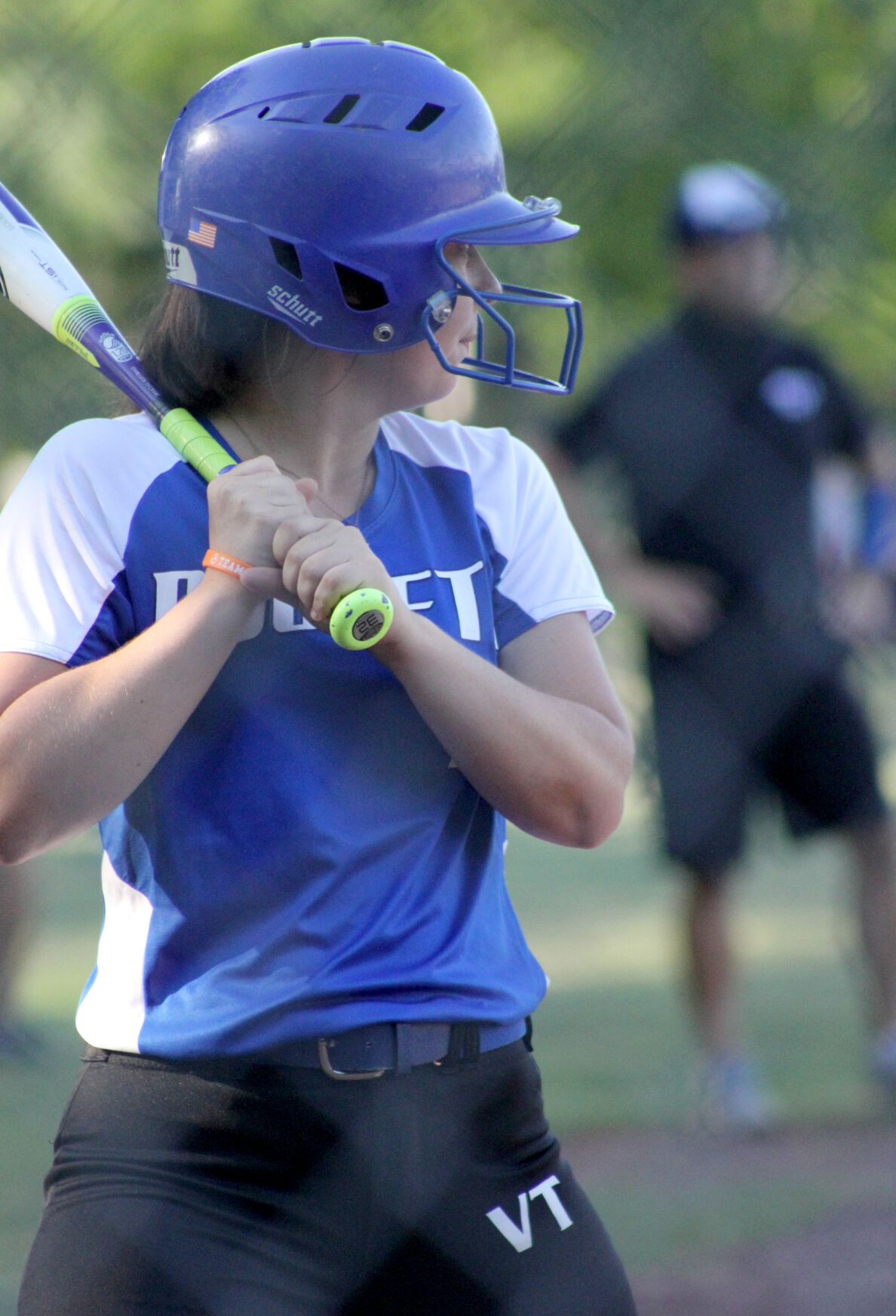 Emily Graham waits for a pitch. 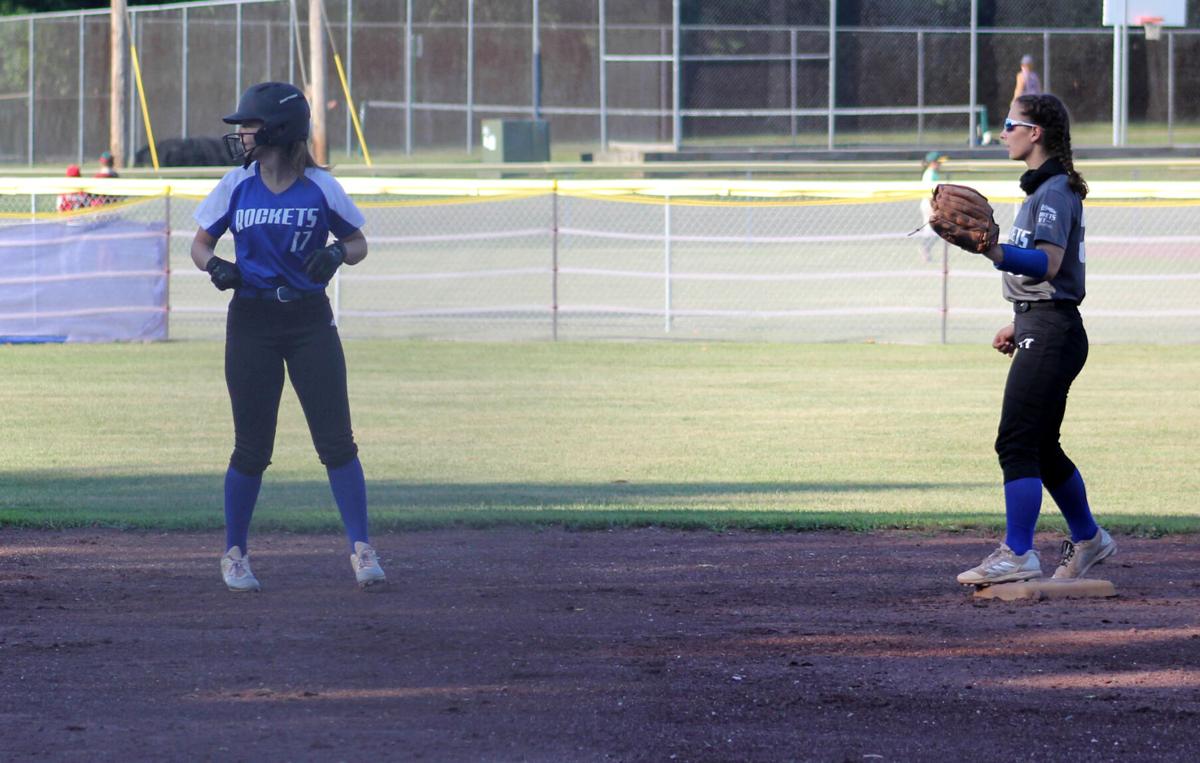 Taylor Baldwin (#17) & Rhianna Sweeney on the field at Georgia Beach. 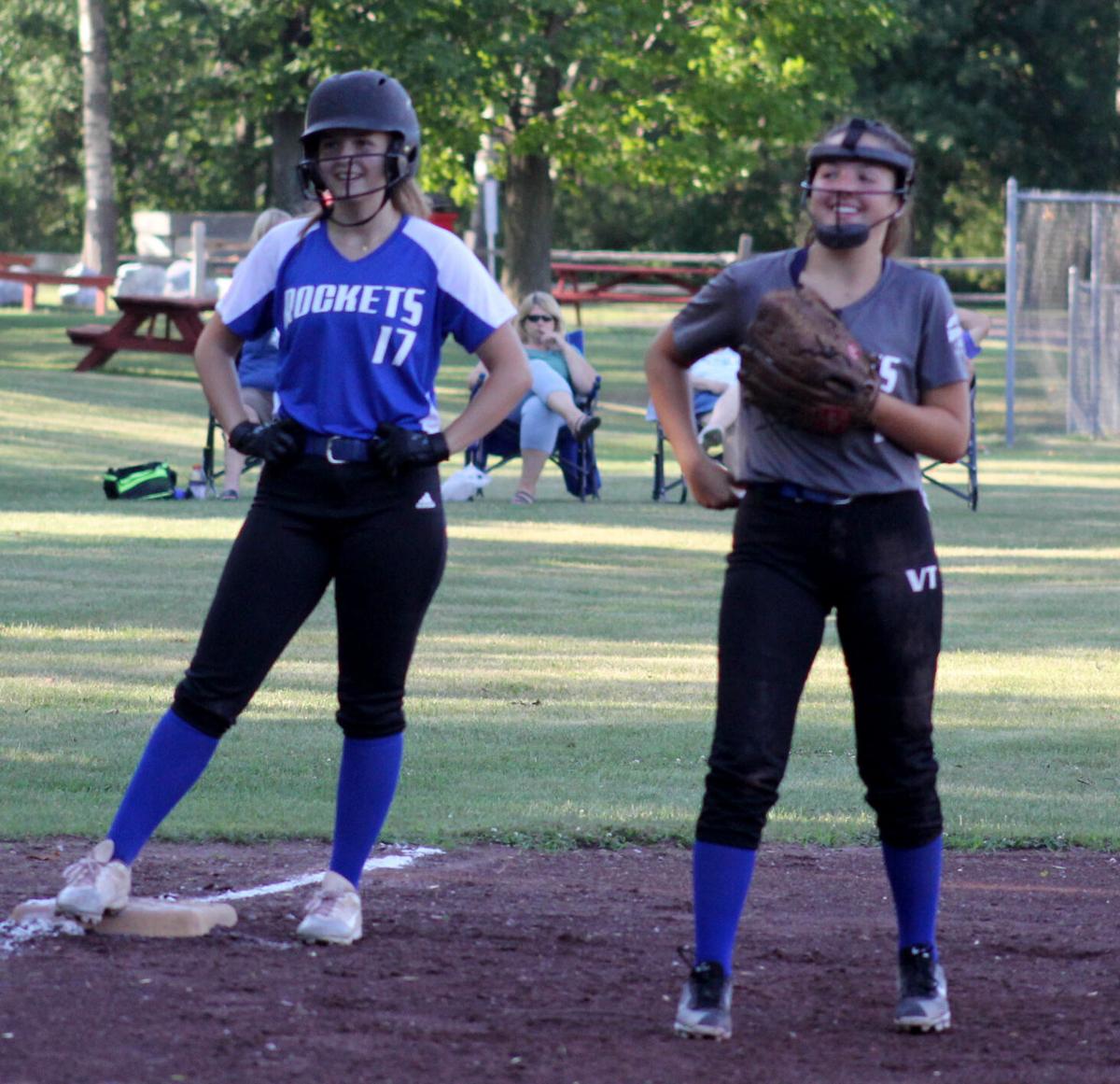 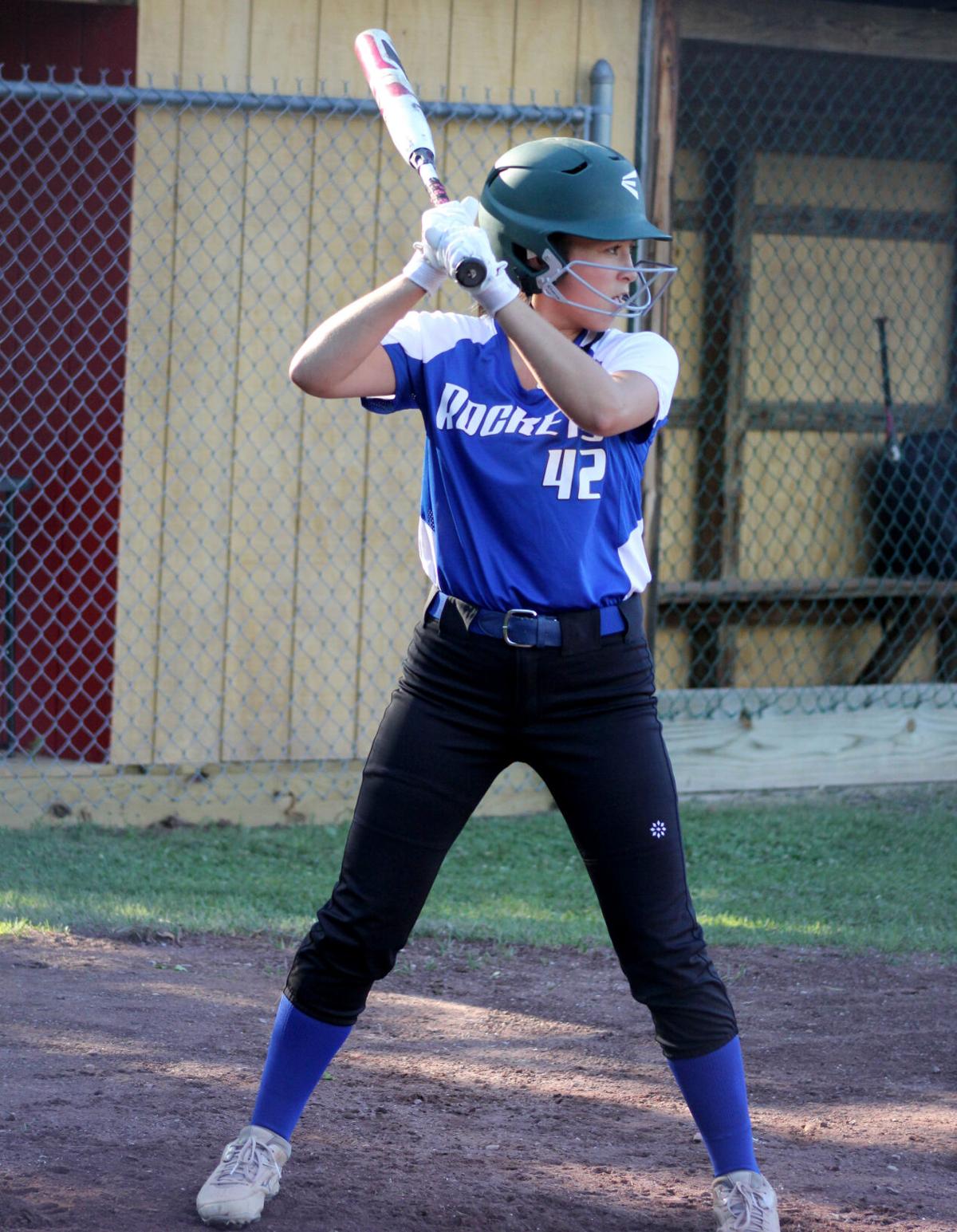 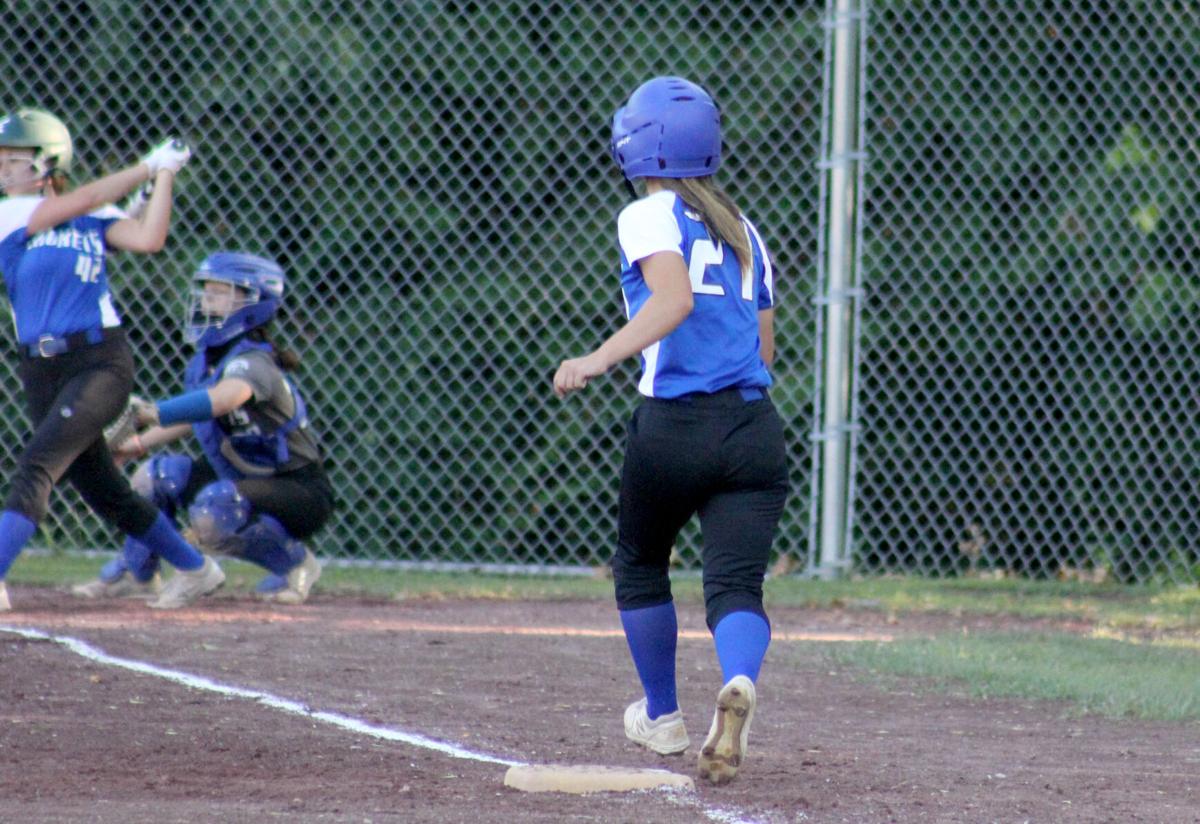 May Gratton on third base in last Wednesday’s scrimmage at Georgia Beach.

Emily Graham throws the ball in the U18 Rockets scrimmage against the U16 Rockets last week. May Gratton looks on.

Caitlyn Dasaro pitches for the U18 Rockets last Wednesday at Georgia Beach.

Emily Graham waits for a pitch.

Taylor Baldwin (#17) & Rhianna Sweeney on the field at Georgia Beach.

May Gratton on third base in last Wednesday’s scrimmage at Georgia Beach.

FRANKLIN COUNTY — The 18U Vermont Rockets Fastpitch softball team took the field mid-July for an abbreviated season. For high school athletes whose spring season was canceled, it was a boon.

In ordinary seasons, the Rockets travel extensively throughout New England and New York, but this summer, the team will be playing closer to home.

Rocket players took a few moments to share some of their favorite memories and talk about how much this year’s season means to them.

Ellie Bourdeau (class of 2020) was poised to enjoy a successful season with the MVU Thunderbirds, runners up for the 2019 DI softball state title, before COVID-19 cancelations ended the spring season.

“It’s meant so much to me to have this chance to play softball this summer. I was heartbroken when I found out my senior season of softball was cancelled; I had so much hope that it was going to happen.

“Playing with the rockets has made summer and life feel ‘normal’ since my daily life has changed due to Covid,” said Bourdeau.

“Even though we aren’t able to play in proper tournaments, and we’ve only been able to scrimmage a couple of teams, it has been so fun to practice the sport I love with my friends, who enjoy it too!”

Bourdeau will attend the University of Vermont in the fall of 2020.

“I plan on trying out for the club softball team at UVM, and I’m very happy to be playing now since I won’t be too ‘rusty’ at tryouts.”

Bourdeau shared her favorite part of participating in the Rockets program.

“I love having the chance to create new friendships each year! You spend so much time with your teammates when you play ASA; you’re able to quickly bond with each other,” said Bourdeau.

“Playing with the Rockets has given me the chance to build lifelong friendships, and I’m forever thankful for that.”

Before COVID-19 restrictions canceled the spring season, May Gratton, class of 2020 at BFA St. Albans, had a good chance of taking the mound with the Comets to defend a state title.

“I am beyond grateful to be playing softball after having our spring season canceled. Although we are limited to a very small number of teams, including our own 16U Rockets, it has been a lot of fun being on the field with these girls for possibly the last time ever!” said Gratton.

“I love every girl on the field with me this season, and I’m super glad that I have been able to play with so many girls who would’ve been playing with me for the Comets this spring.”

Gratton thanked her coaches for the work they’ve done to make the summer season possible.

“I am super thankful for Bill and Connie Sheets, who put in so much effort to get us scrimmages and do the amount of research they had to do to get us set up at tournaments,” said Gratton.

“Although the out-of-state tournaments didn’t work out, the scrimmages have been a lot of fun, and it is always great to be back on the ball field.”

Gratton also shared some of her favorite Rocket memories.

“I have so many Rocket memories it is hard to pick one! My very first year, I loved being coached by two, strong, young women who played for Merrimack College: Alexis Perry and Bri Conger.

“I grew so much as a softball player that year! One tournament, I got the MVP for every game of that Saturday!

“I loved staying in hotels with my teammates, going to dinner, and all the inside jokes we’ve had over the years. I am going to miss the Rockets so much, and I am so glad that I was able to become part of this wonderful program.”

Emily Graham, another member of the MVU Thunderbirds, also missed out on a varsity season this spring.

“Getting back on the field after missing the high school season has meant a lot to me because I love the sport of softball and all of the girls I get to play with,” said Graham.

“Being able to get back on the field starts to make things seem a little more normal again, even when they’re not.

“My favorite memory to date with the Rockets would have to be when all the teams get together at Laconia, and we have a barbeque and play games.”

Taylor Baldwin of BFA Fairfax is another player who was on a high school team poised for success this spring.

“It’s meant a lot to be back on the field again after missing the high school season. My high school team had a chance at the state title, and not being able to compete was disappointing,” said Baldwin.

“Just being able to play the sport I love and be back with teammates has made it a bit easier to deal with the disappointment of the high school season.”

The annual Rocket tournament at Georgia Beach was a highlight for Baldwin.

“Our 16U Rockets team had a tough season on the road last year; coming back to Vermont to play in our home tournament and winning the 16U bracket has been my best memory to date!”

“It has meant more than the world to finally be able to play with these girls after basically an entire year without being on the softball field,” said Daudelin.

“My favorite Rocket memories are all the team bonding, the team dinners, and hotel room laughs. This is definitely something I miss this year.”

A word from the Rockets' coaches and administrative staff: The utmost priority for the Rockets has been the health and safety of all participants. Once we received confirmation we could move forward with in-state play, we put together a Task Force of individuals to include the Board of Directors, parents involved in the medical field, and parents involved in high school administration.

The group was instrumental in providing guidelines to keep everyone safe and continues to offer insight when new concerns arise. We also surveyed all Rocket families to get a feel for how they wanted to move forward and the overwhelming consensus was 'let’s do it, but in a safe manner.'

From an Administrative perspective the summer was quite challenging due to having to keep an eye on guidelines for multiple states related to out of state travel. Ultimately, all out of state travel opportunities were canceled but collaboration among the Vermont travel teams resulted in a robust schedule including weekday and weekend games while meeting health and safety guidelines.

From a coaching perspective, it has been great to get the players back on the field and provide some normalcy for them and us. It is difficult to imagine having to deal with the challenges they are facing due to the pandemic at their age but they seem to be taking it in stride, which speaks to their resiliency.