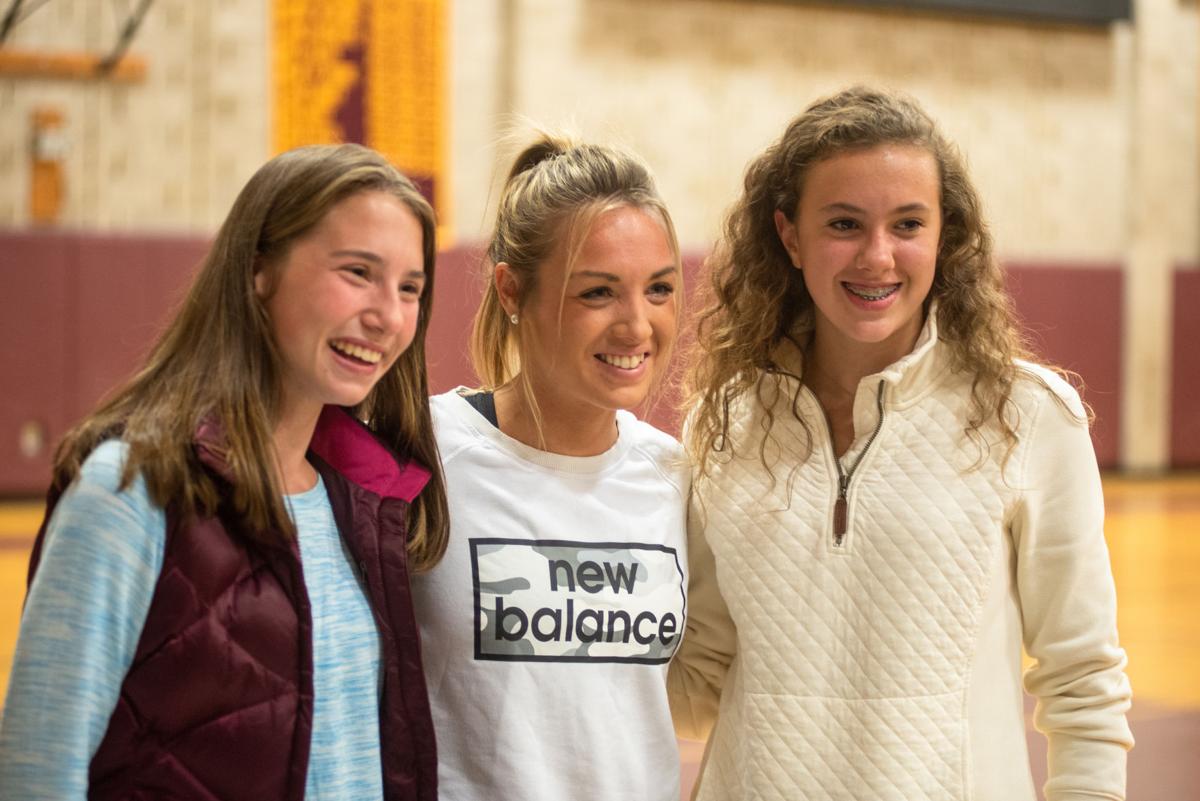 Elle Purrier poses for a photo after speaking to Franklin County runners at Richford high school on Thursday night. 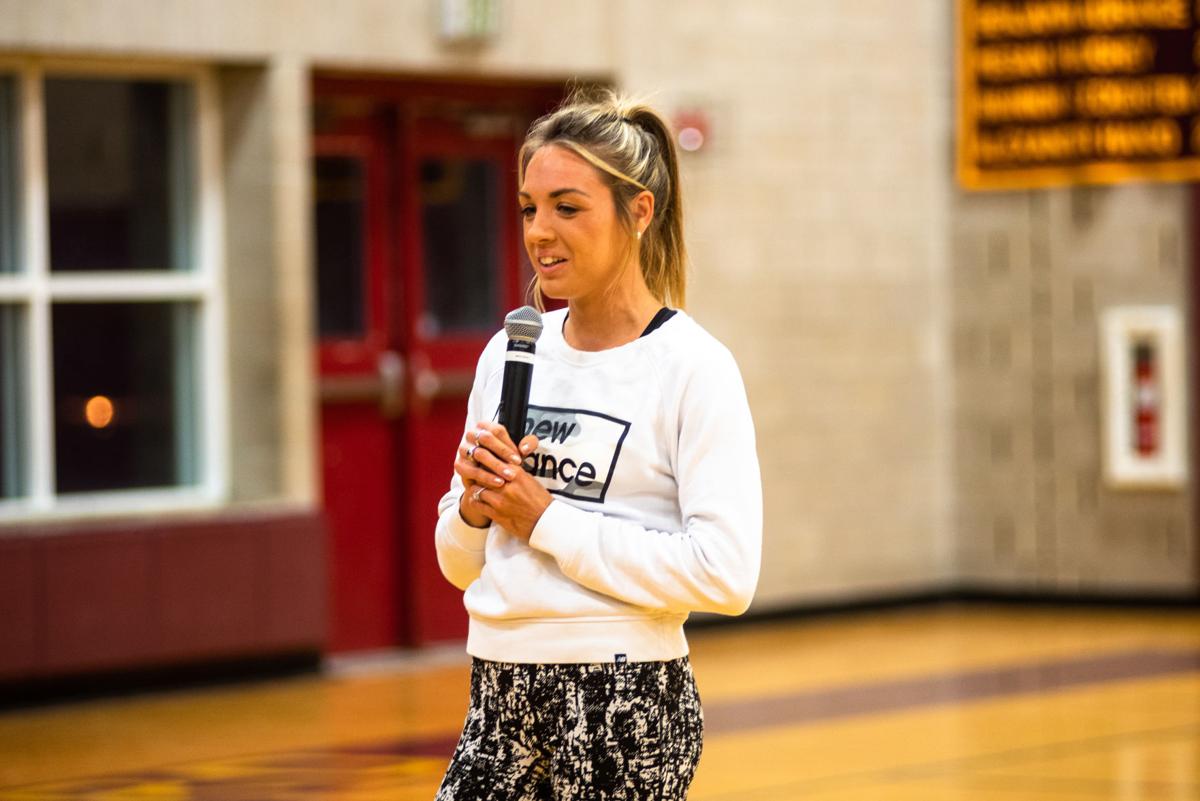 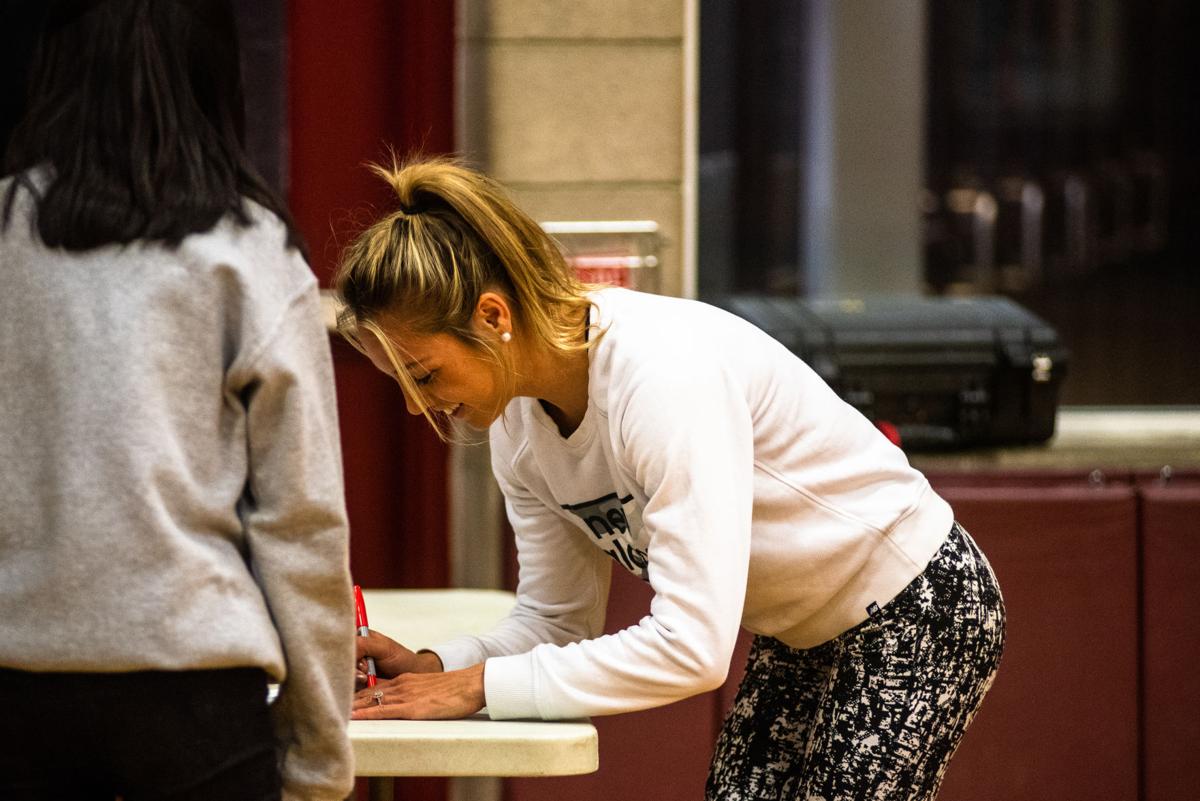 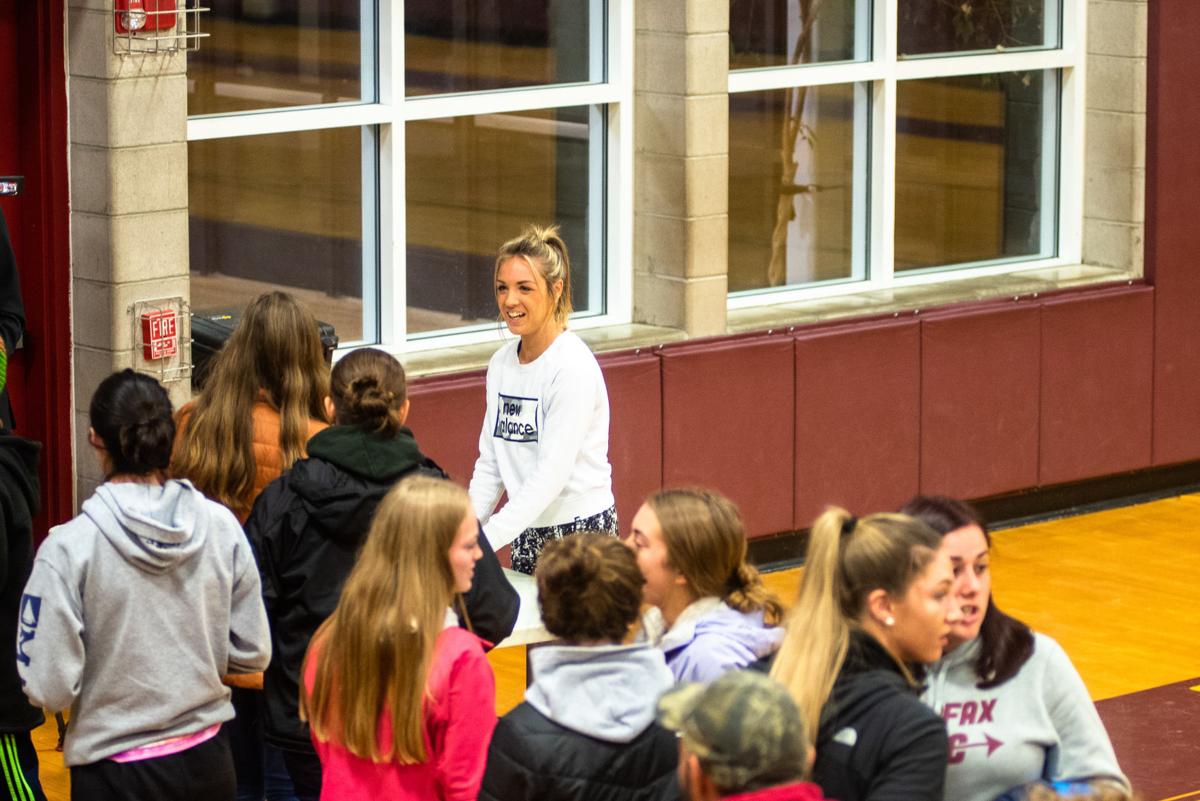 Elle Purrier poses for a photo after speaking to Franklin County runners at Richford high school on Thursday night.

RICHFORD — Elle Purrier, fresh from competition at the IAAF World Championships, spoke to runners from MVU, Enosburg, Fairfax, and Richford on Thursday evening.

Banners from Purrier’s high school years hung beside and over her as she spoke of her time competing in high school, in college, and as a professional runner.

Purrier finished 11th at the World Championships, solidifying her place as an elite runner on the international stage, and she’s now back in Vermont for a much-needed break.

The Montgomery native is never too busy to give back to the community that gave her so much, and Thursday’s event proved that true once again.

Purrier began by sharing about her transition from high school to college.

“My first week in college, I remember doing the warm-up for our team, and I thought that was the workout, so it was pretty tough,” said Purrier chuckling. “I got used to it, and I made some of the best friends of my life.”

Her most successful year was her last, and it was the National Championship win that year that launched her professional running career.

She won a National Title her senior year and also ran the second-fastest mile time by an NCAA female athlete in indoor track.

“The National Championship helped me seal the deal,” said Purrier. “I got an agent and started talking to shoe companies around the country.”

Purrier eventually signed with New Balance and settled in Boston.

“I’ve learned a lot over the last year, and I’ve traveled all over the country and all over the world,” said Purrier. “It’s amazing and humbling at the same time. I would never have imagined this in high school or college.”

The summer running events of the 2019 season have provided Purrier with experiences she will cherish: the photo finish against Jenny Simpson at the 5th Avenue Mile in New York and the World Championships in Doha, Qatar, to name two.

Purrier shared three pieces that have helped her develop as a runner.

First, Purrier encouraged students to take seriously the mental side of running.

“The mental aspect is just as important as the physical aspect,” said Purrier. “If you don’t believe in yourself you’re not going to perform. Self-confidence is so important in running.”

“In the New York Mile, I was neck and neck with Jenny Simpson, and I think there was something in me that didn’t believe I could beat her,” shared Purrier. “It’s so important to believe in yourself!”

Purrier also encouraged the athletes to remember to do what worked for them as individuals.

“I wasn’t a traditional runner and didn’t do a lot of mileage as a younger runner,” said Purrier. “I did a lot of cross-training and did what worked for me.”

The final point Elle shared with the group was focused on commitment.

“I didn’t get a handle on this until my professional career. It’s scary to think about doing this and giving it everything I possibly can to accomplish my goals,” said Purrier. “I am always thinking about what will make me a better runner.”

The commitment to run professionally has required sacrifices--traveling three months a year, training twelve months a year, passing up late nights with friends and living a lifestyle that is focused on competing at the highest level.

Purrier also spoke of the pleasure it was to return to her home-town school.

“My life has really come full circle. Here I am in the gym where I used to play basketball,” said Purrier. “This was my home, and it’s so awesome to be here with you guys.”

Purrier ended her discussion with the crowd answering questions on everything from her nutrition to the experience of running in Qatar. The students listened and laughed as Purrier shared her stories with candor and humor.

Eyebrows raised as Purrier spoke of running 70 miles a week, as she shared about days filled with running long distances and taking time on track sessions.

She spoke of her hope to join the Olympic team in 2020, and how she focuses on each new goal that comes her way.

“I’ll start training in a couple of weeks for the Olympics. The trials are in June,” said Purrier, “so we’ll find out then if I get to Tokyo in 2020.”

The trip to Qatar was a topic of much interest to the group gathered in the gym.

“It was amazing to spend time with the runners from the American team,” said Purrier. “I knew who they were before, but I hadn’t talked with them. They were my competitors, but now we were on the same team.”

After taking questions, Purrier welcomed the students to join her for photos and autographs.

This isn’t an opportunity you get every day,” said Still.

“This is a once in a lifetime opportunity,” said Witalec-Kruppa. “It’s proof that just because you come from a small town doesn’t mean you can’t achieve big things.”

“We’ve got the NVACS this Saturday and we’re hosting it, so this is great timing,” said Flint. “Elle is such an inspiration.”

Anna Breuckner, an MVU runner who graduated in 2019, heard Purrier speak last year and came back to hear her again.

“It’s so cool to see how proud everyone is of her. She’s definitely inspirational and awesome to watch,” said Breuckner.

Carly Archambault and Matt Paul, runners from Richford, were glad to welcome their hometown hero back to her old stomping grounds.

“I hope she makes it to the Olympics because I look up to her,” said Paul.

“She really shows you that no matter where you grow up you can achieve your dreams if you work for them,” said Archambault.