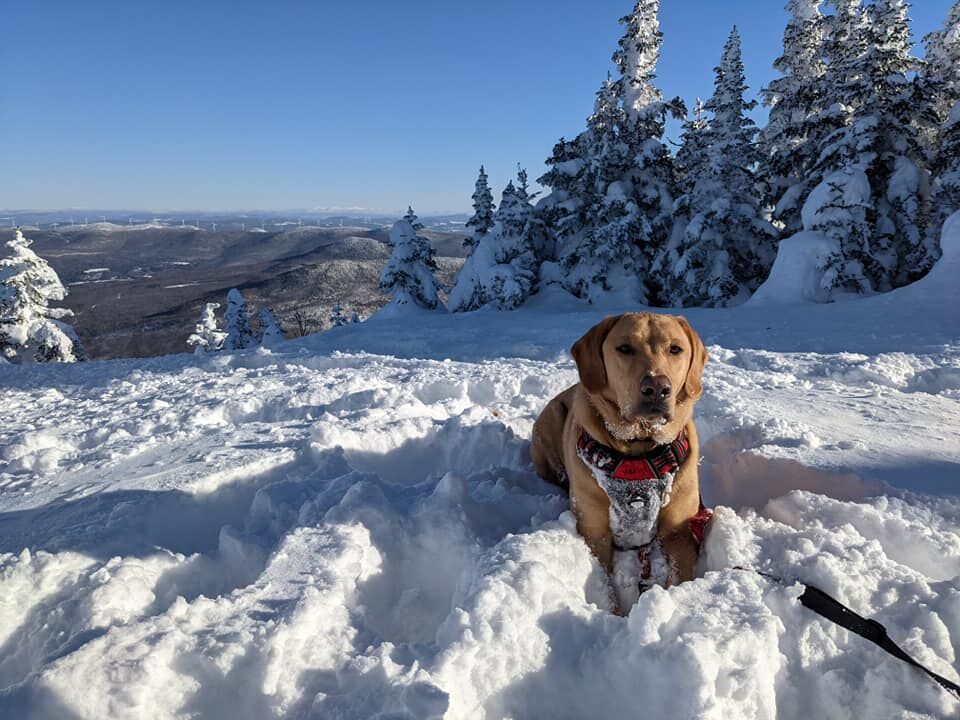 Yadi sits on the summit of Belvidere Mountain. The White Mountains of New Hampshire line the horizon in the distance. 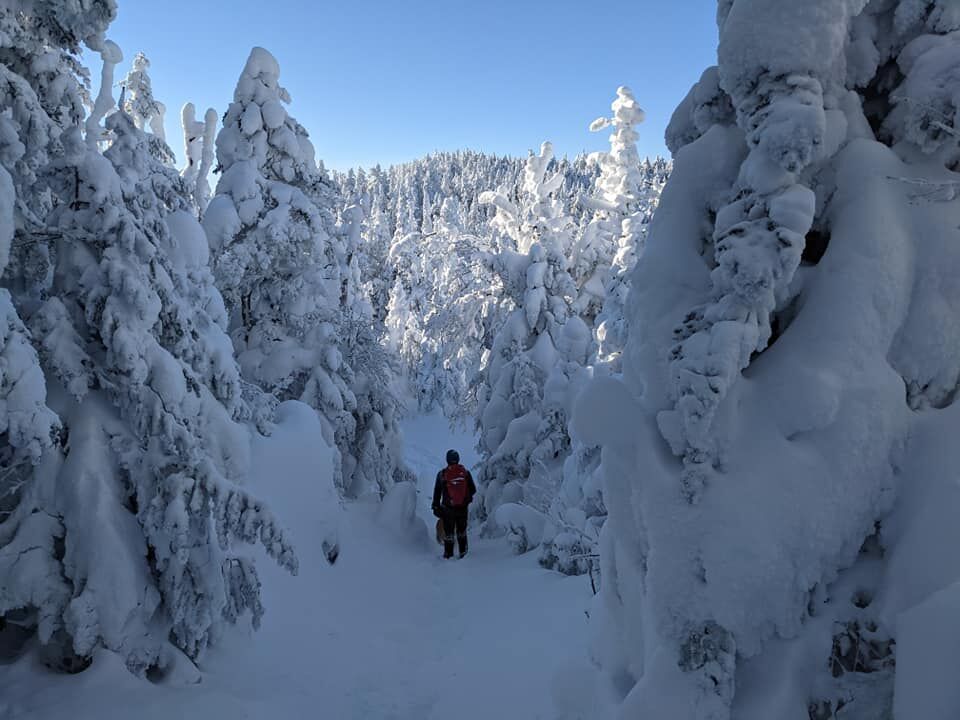 Adam and Yadi descend off the summit of Belvidere Mountain. 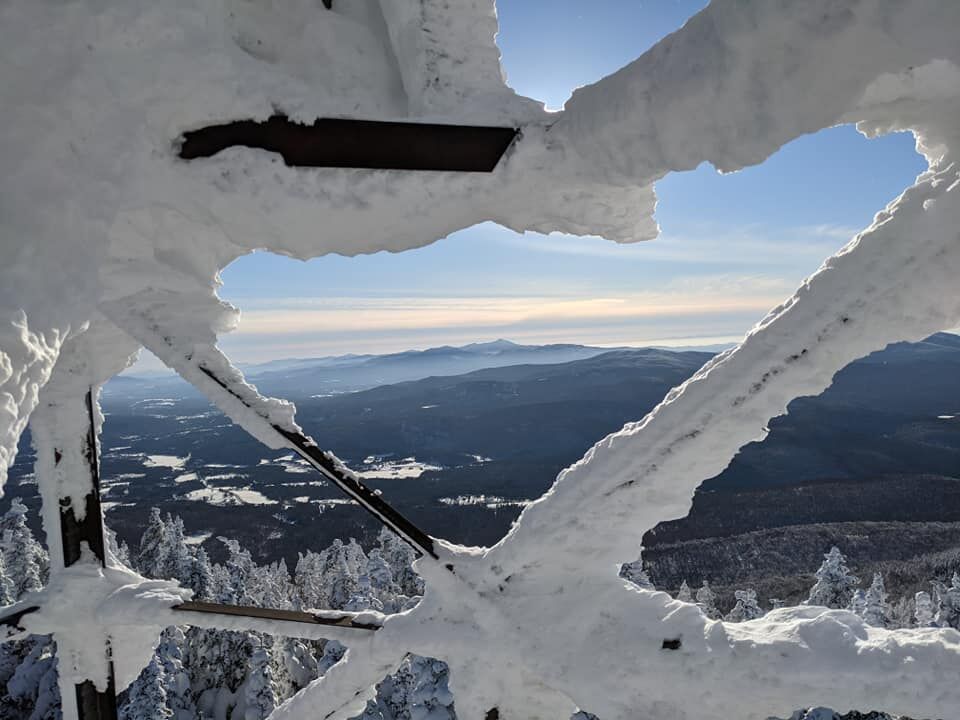 Mount Mansfield viewed through the snow on the bars of the Belvidere Mountain fire tower.

Ruthie and Yadi hike through the snowy trees on the Long Trail North to the summit of Belvidere Mountain.

We’re back to the mountains this week with a hike up one of Vermont’s eleven fire tower peaks. Belvidere Mountain, in Eden, has views from the summit, but a climb up the 50-foot fire tower provides an incredible vista, including the White Mountains in New Hampshire, the Adirondacks in New York, and the higher summits in the Green Mountains.

We woke up before sunrise to the house ‘popping,’ and the temps well below zero. Yadi was coming with us, so I planned to leave a little later so he wouldn’t freeze.

When we pulled into the trailhead at 1 pm, the sun was streaming through the trees, the temps had warmed to low double digits, and there wasn’t a whisper of wind.

We had chosen the route to the summit I’d never taken, the Long Trail North. In the winter, the white blazes marking the trail on the trees can be harder to spot through the snow.

The trail rambled through a hardwood forest and over several stream crossings before beginning to ascend more steeply. As we gained elevation, the mountain began to transform; the snow in the trees grew thicker and thicker, some branches loaded with well over a foot of powder. The conifers in the higher elevations were almost unrecognizable, snow-covered giants rearing out of the ground. It was akin to walking through a Dr. Suess book; the terrain was so altered!

Hiking with Yadi always adds an element of surprise. This time, something on the side of the trail caught his attention, and he went crashing off into the snow. Keep in mind, he’s hooked to me, so I leveraged my weight to ensure I didn’t pitch headfirst into the fluff.

In the 1930s and 40s, 38 fire towers were built on Vermont's peaks. These towers were monitored by paid observers who kept a watch on the forest for fires. As the use of satellites increased, the need for fire towers dwindled, and many fell into disrepair. Today, eleven of those towers remain and can be used to get a bird's eye view of the landscape--for fun, not for fire!

Suddenly, there was a great flapping of winds! A partridge launched out of the snow. If I was lighter, there’s no doubt Yadi would have taken me with him to get that bird!

Shortly before the intersection with the Long Trail and the fire tower trail, the tracks we’d been following disappeared. We were on our own, picking out the faintest drift or the feeblest white blaze as we went.

When we reached the Long Trail’s intersection with the fire tower spur, we headed to the right, ducking under snow-filled trees.

The azure blue sky and the brilliant sun made for eye-popping beauty, and as we broke into the tower clearing, the views expanded exponentially. Jay Peak and the northern Green Mountains were cloaked in white. To the east, the horizon was broken by the snow-capped peaks of the White Mountains.

A quick and careful climb of the tower revealed even more incredible views. Mansfield and the Green Mountains’ higher summits basked in the cool, January sun. A small inversion covered lake Champlain and the surrounding valley, and the Adirondacks towered above the clouds to the west.

The tower is imposing in the summer, but it goes to a whole new level in the winter!

The fire tower was covered with snow and rime ice, and I stopped to take a few pictures ‘framed’ by the frosty white metal beams of the tower.

The descent is almost always quicker than the ascent, and this hike was no exception. We jogged down the trail, the afternoon sun creeping farther and farther down the sky. The lower regions of the forest felt the strength of that sunlight, a million sparkling water droplets sparkling around us as the snow melted. We got to the car, warm and winded, even Yadi. That’s a good day.

How do you hike Belvidere Mountain?

You can climb Belvidere Mountain from four three trailheads.

I'd recommend snowshoes since this trail does see less use than many other Vermont trailheads.