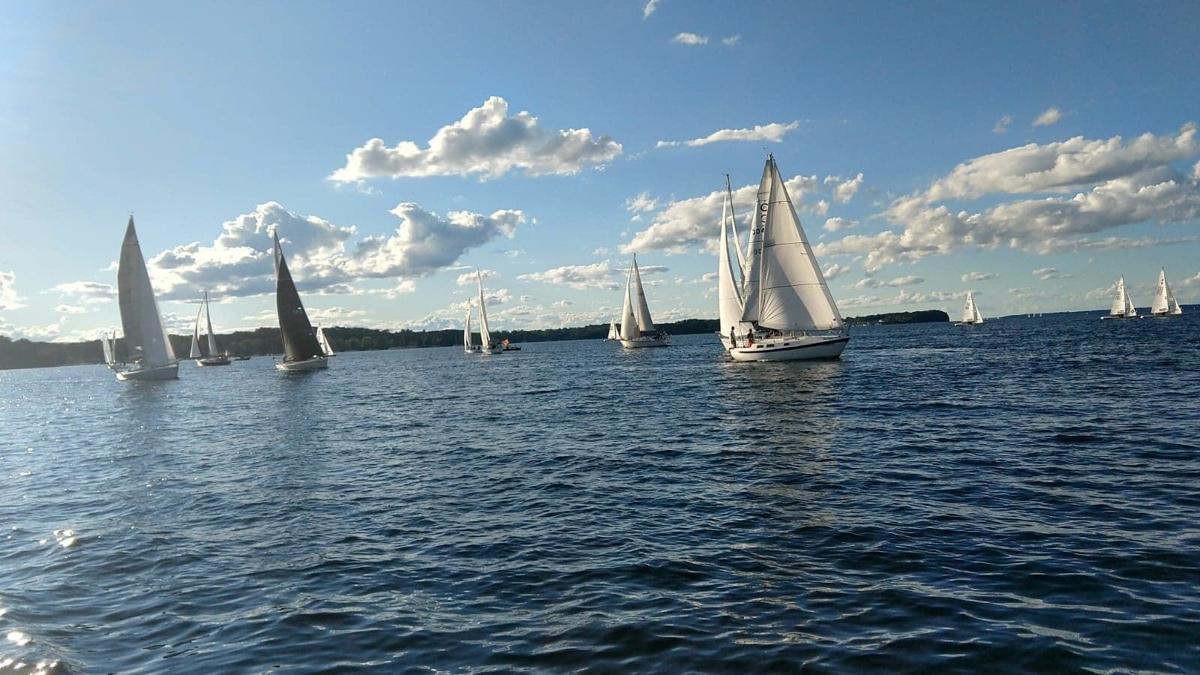 Sailboats prepare to compete on Shelburne Bay on Lake Champlain in August. 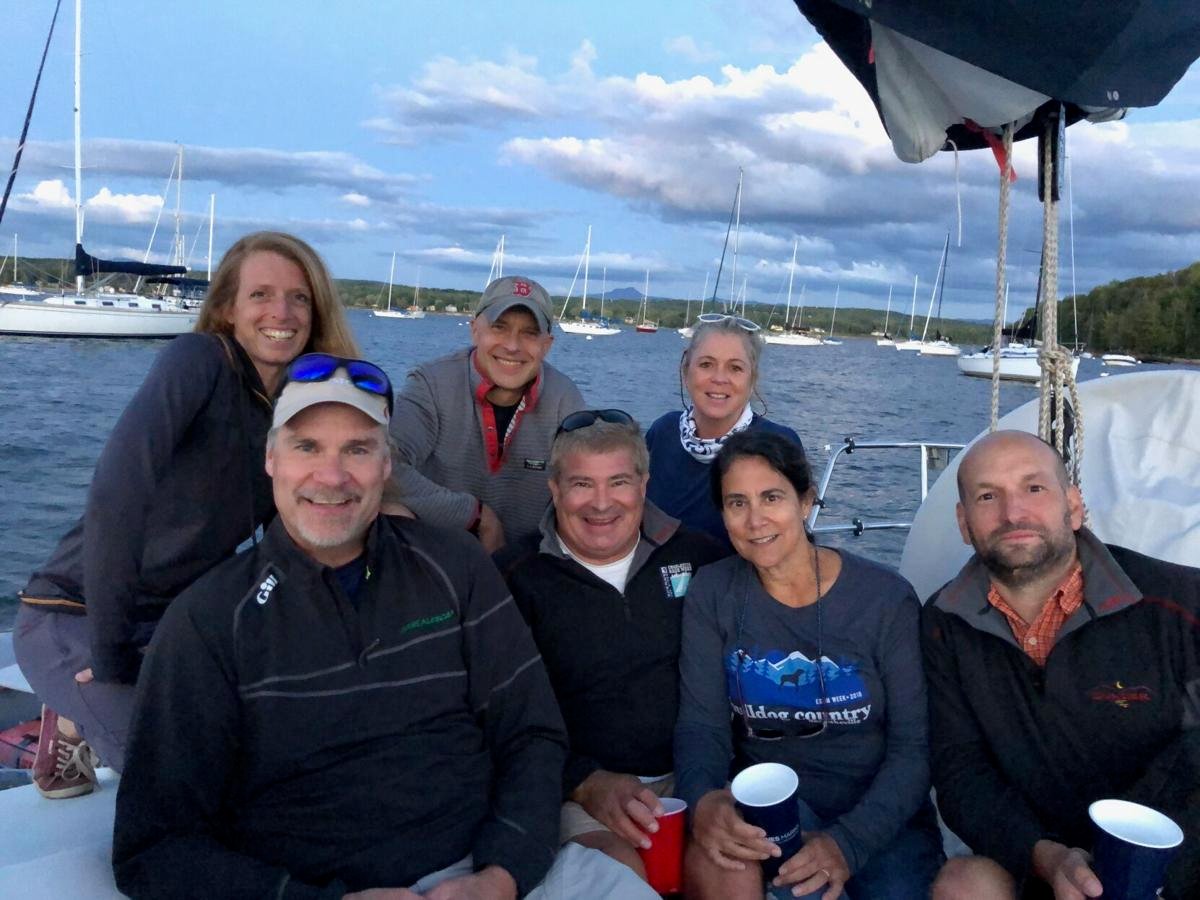 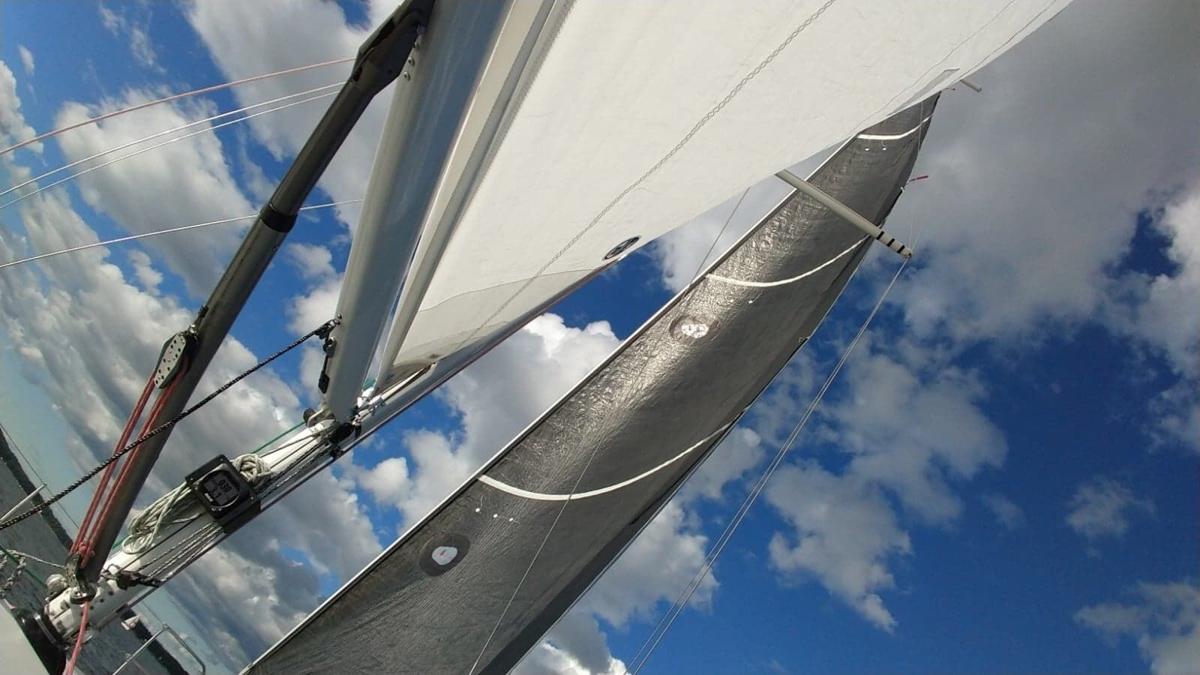 Peering up the mast of the Rogue. 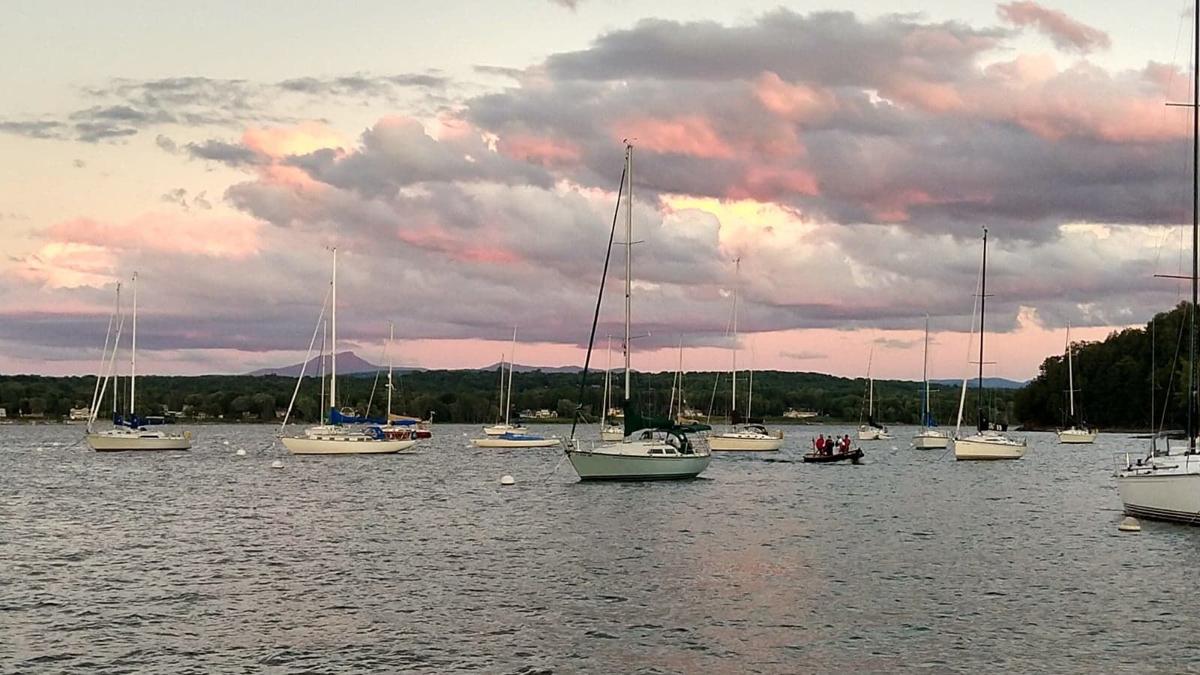 Evening on the Bay. 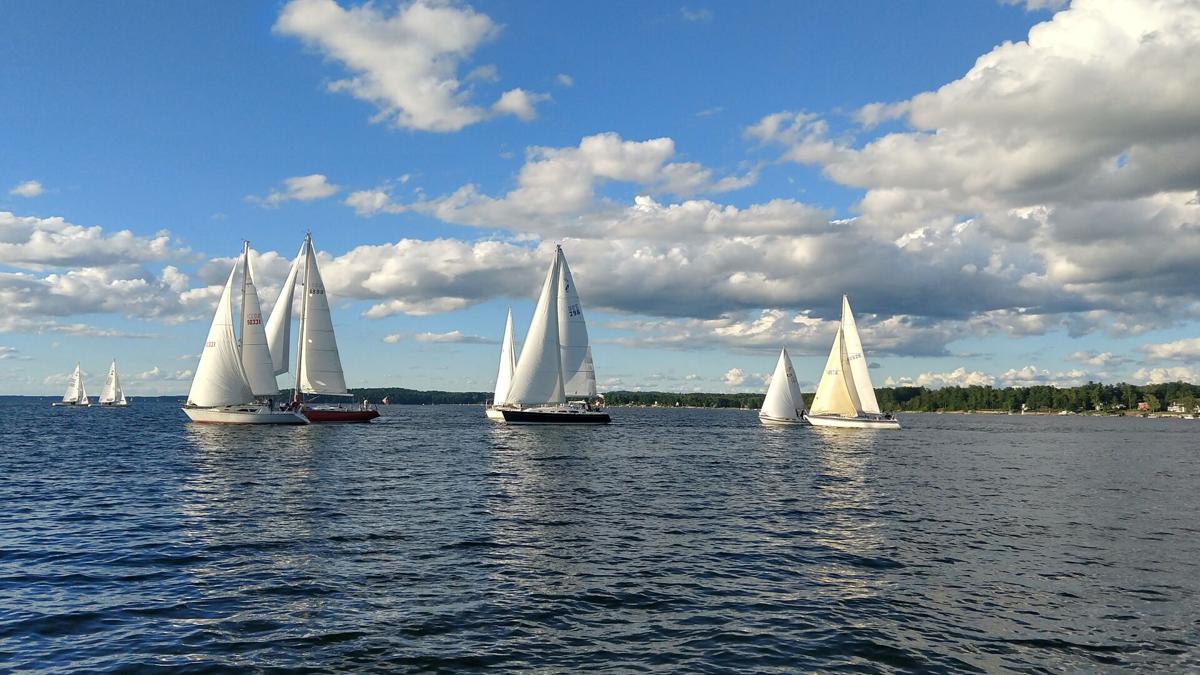 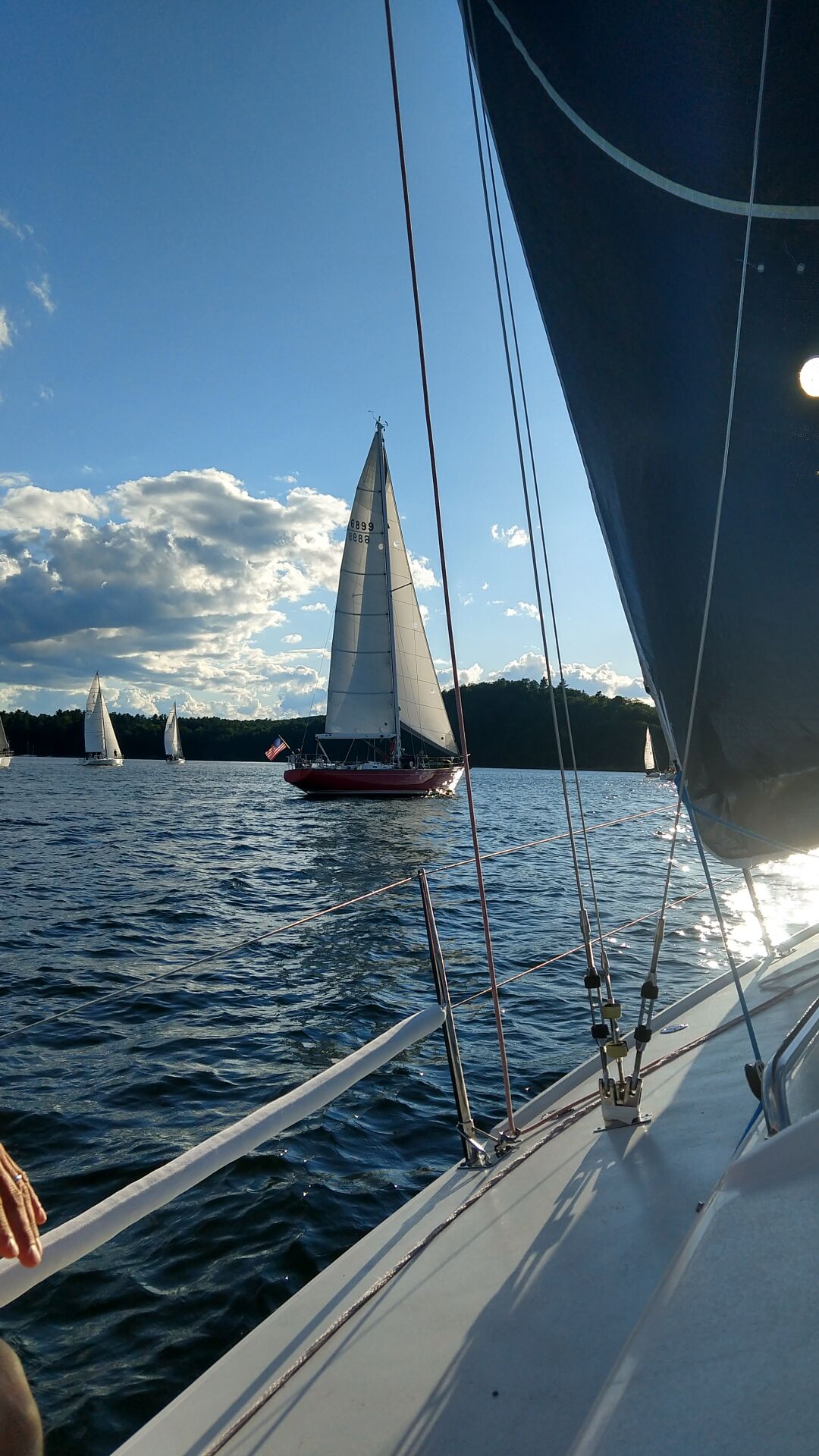 This sailboat with the shiny red hull was very eye catching!

SHELBURNE — I understand not everyone shares my love of winter. In light of that, I have a column about warm sunshine, balmy breezes, and the sound of waves (I didn’t swim, so I can’t confirm the temperature).

This summer, I joined the crew of the Rogue for one of the weekly races held at the the Lake Champlain Yacht Club. It was a perfect evening for sailing, and I was thrilled to have the opportunity to go!

The 35-foot Rougue is a J105, fixed keel, one design sailboat, intended to be fast, strong, and fun to sail. The boat is designed to sail with a large asymmetrical spinnaker; I got up close and personal with that later in the evening.

I grew up sailing on Lake Champlain on a 1975, 21-foot McGregor Venture. My favorite outings were the ‘window in the water’ days when the little boat would heel (lean) over so far that the waves came up over the windows.

When I got the invite to join the crew of the Rogue for the evening, I was excited, but I was also a little nervous. I hadn’t sailed in quite a few years, and I had never been on a racing boat.

A racing sailboat is as different from a day sailor as a race car is different from a sedan. The narrow hull, low profile, and massive sails are a far cry from the slightly round and manageable boat of my youth.

Getting to your destination is key: In hindsight, I should have worried more about finding the yacht club. Thankfully, Shawn Rouleau, the kind neighbor who invited me to sail, helped me find it.

Earlier in the summer, I’d interviewed Shawn for a two-part article about his sailing career. His knowledge of the sport and the experiences he’s had are extensive; I was glad I’d get to see him in action!

Sailing with the pros: Just as the sun was bathing the bay in golden light, we pushed off from the mooring, the skilled crew preparing the boat for racing. They made adjustments to equipment and talked about wind speed and direction and which boats were racing that evening.

If you’ve never been part of a sailboat race, it’s an experience that will stay with you. Boats from several classes crisscross the glistening water, sometimes within arms reach of one another, waiting for their turn to race.

The boats that have begun to race hunt for the best wind and spy out the most efficient tack; I watched from the deck as sails snapped and bright hulls slipped silently through the waves.

The crews on the boats waiting to race waved as they passed one another. Shawn explained that many have raced against each other for years, and some may have raced together on other boats.

When it was our turn to race, it was all business. I was assigned to the spinnaker, the large, colorful sail that’s used when going in the direction the wind is blowing (downwind). The little boat I grew up sailing didn’t have a spinnaker, so when Shawn explained the process of raising and lowering the sail, I listened closely.

Sailing is a mix of art, science, and intuition. Watching Rouleau asses the wind and conditions, it was easy to see he a solid mastery of all three.

I don't think I ever mastered the spinnaker, but I also didn't lose my sunglasses or phone, so I'd say it was a success.

Remember when it was light until 9 pm? When the horn blew and the Rogue leapt to life, we took off on a smooth, fast tack. It was after 6 pm, but the sun was still high, and the air was balmy.

At the end of the first tack, I scrambled across the deck and prepared to unfurl the sail. I still had my sea legs, which was good. I dropped to my belly and mentally ran through the list of things I had to do.

It was a bit of a struggle: I’d like to tell you I nailed it, but I know I forgot a few important parts--namely, letting the rest of the crew know when everything was ready to go. Thankfully, they weren’t relying too heavily on my skills. After the usual confusion that comes from ‘coming about,’ the boat surged forward as the wind caught the sail.

Boats surrounded us on the left and the right (or port and starboard, if you want to get technical) as we looked for the best angles and breezes to gain an advantage. When it was my turn to deal with the spinnaker again, I hurried out, grabbing handfuls of sail to keep it out of the water...almost.

"Sailing is a mix of art, science, and intuition. Watching Rouleau asses the wind and conditions, it was easy to see he a solid mastery of all three."

Time does fly when you’re having fun! Often, the things we enjoy most end more quickly than we’d like. After several tacks (going back and forth) up and down the bay, the race came to an end. I don’t think I ever mastered the spinnaker, but I also didn’t lose my sunglasses or phone, so I’d say it was a success.

When we arrived at the mooring, the light in the sky had faded to glorious shades of pink and purple. The calm water reflected the colors, and across the bay, the summit of Camel’s Hump rose above the trees.

Into the deep end: Sailing is like life. You’ve got times when you’re waiting for things to happen and times when there’s so much happening you’re not sure you can manage it all. Both circumstances make the journey enjoyable; you just have to learn to embrace the moment you’re in!

Did you know these fun facts about Lake Champlain?

Width at it's widest point: 12 miles

Deepest point: between Charlotte, VT, and Essex, NY at 400 feet

Life Under the Sails: Salty waters

FRANKLIN — Shawn Rouleau, who resides in Franklin and now races on Lake Champlain, got his start in the salty waters of the Atlantic, racing o…