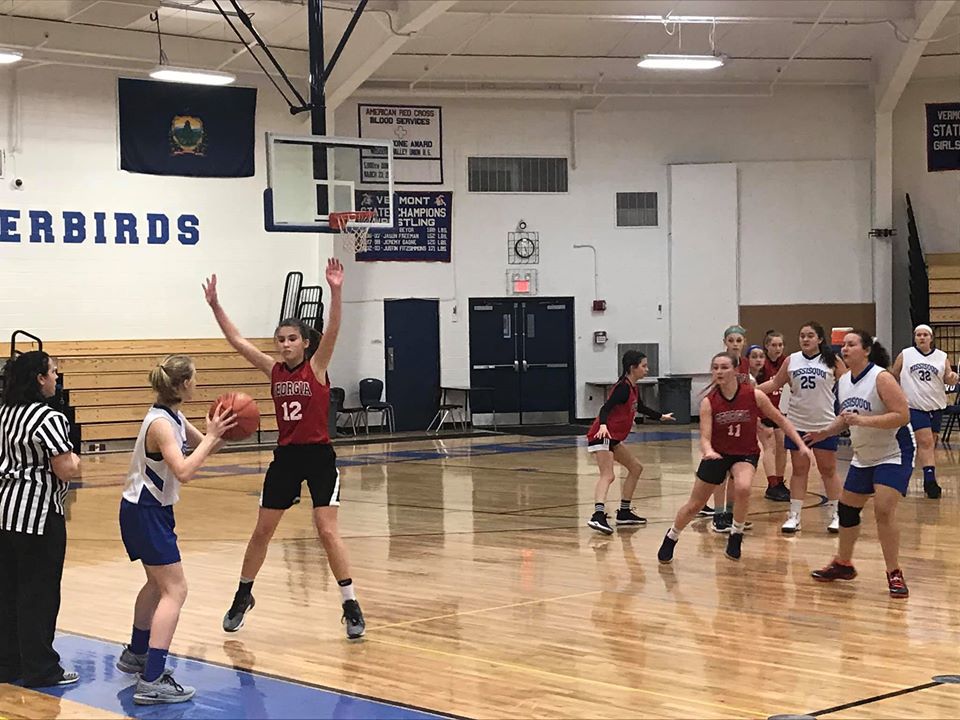 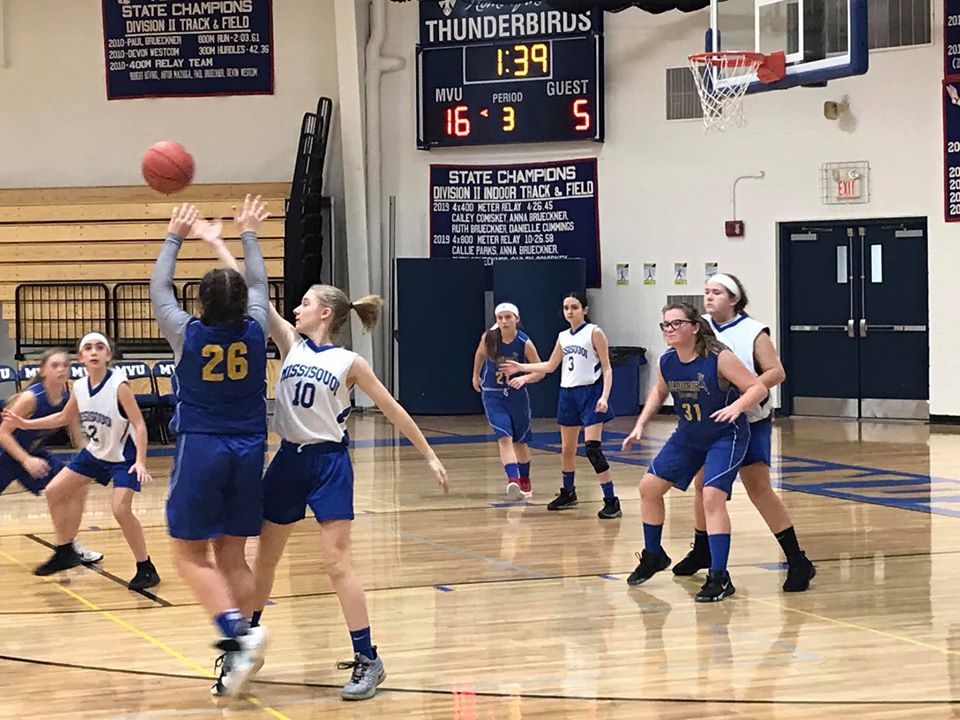 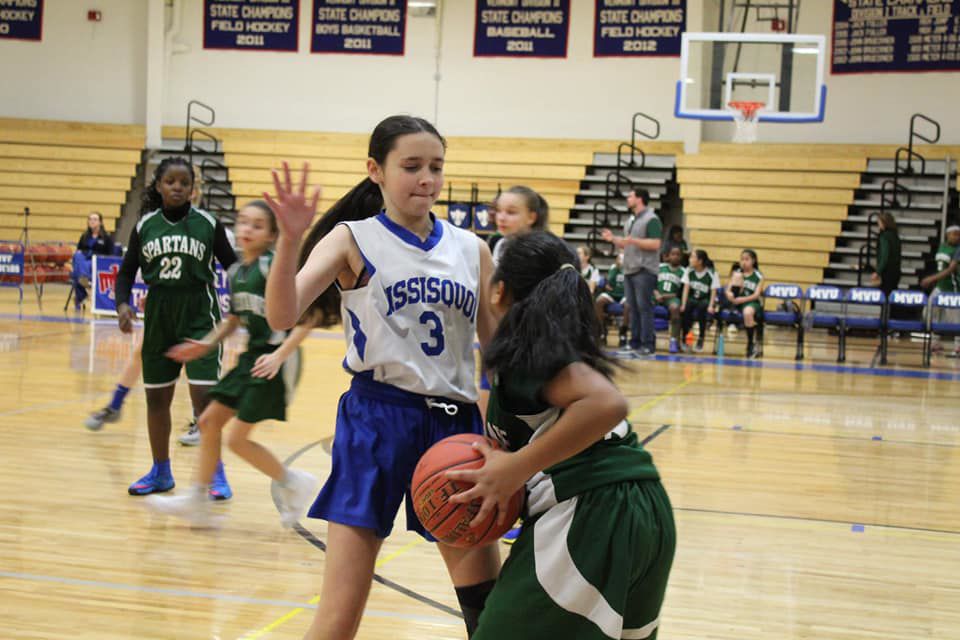 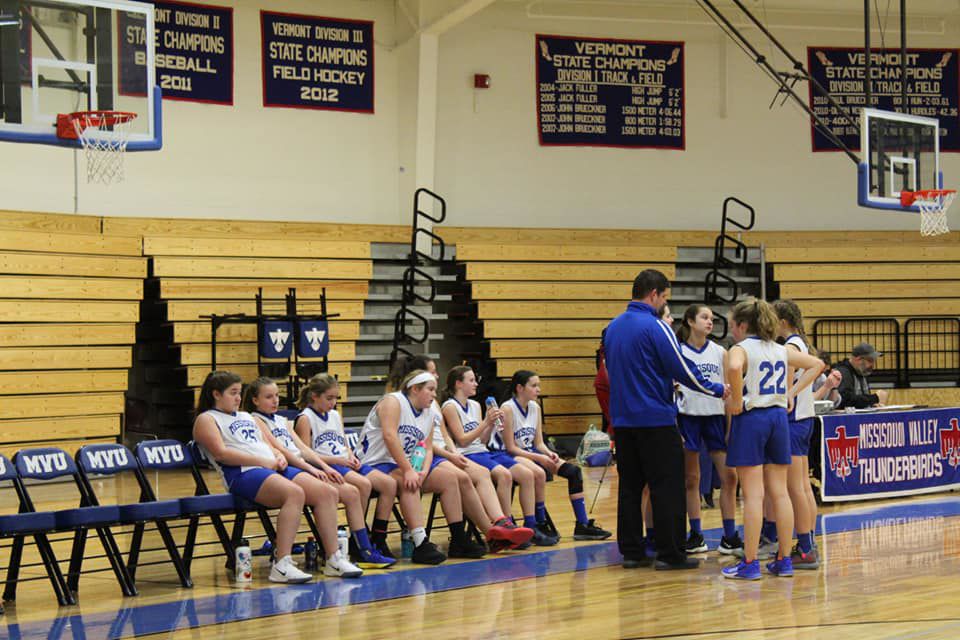 The MVU 7th grade basketball team takes a timeout during on of the 13 wins they earned to complete a perfect season.

The MVU 7th grade basketball team takes a timeout during on of the 13 wins they earned to complete a perfect season.

The girls won their final game on Feb. 4 against Georgia, a team known to be tough to beat, according to MVU coach Tim Luneau. The last game of the season was canceled due to last week’s storm.

Luneau is in his second season with the MVU 7th-grade team, and he’s pleased with the girls’ progress.

“We had a much more balanced scoring effort this year,” said Luneau. “I try to play the kids equally. You never know who’s going to be your varsity starter based on middle school games.

“We keep things simple at the middle school level--focusing on defense and offensive actions that will translate to the varsity level.

“The kids can’t practice help rotations, defensive postures, and stances on their own,” said Luneau.

“More often than not, I can count on my team playing good defense, and if you play good defense, you can score a lot of points after that.”

The girls held seven teams to less than ten points a game while averaging 35 to 40 points on offense. In 9 out of 13 games, different girls led the team in scoring.

Many of the teams the MVU seventh-graders faced were combined 7/8 teams.

“We played at Berkshire on their ‘senior’ night, and they had a lot of tall eighth-graders,” said Luneau. “We were down by five with two minutes to go.

“I thought that might be the end of our win streak, but we got three possessions where we scored; we were up by two, and we won by two. The girls were impressive to watch.”

Luneau believes simplicity is key at the youth level.

“Some of the girls play for other coaches, and those coaches have more complex plays. I don’t want them to have to remember two different sets of plays at this age.”

He also knows the value of taking some losses. “I tell the kids to play hard and not worry about the score. I do believe that you have to lose to win, and this same group of girls took their lumps in Mini Metro this year.”

Fun is another key to success for the seventh-grade girls’ team.

“They’ve been a really fun group. Having coached three or four years at this age level, I’ve learned there’s a certain amount of giggling and fun that’s just going to happen,” said Luneau, chuckling. “They also like to do Tik Tok dances.”

Alongside the fun, Luneau is looking to prepare his athletes for varsity.

“We’re trying to give kids good strategies for life. If you make sure you’ve done the work in practice and you’re comfortable in games, you’ll do well.

“If my kids can be comfortable and confident and can make their opponents uncomfortable, we’ll probably win.”