Starting at
$5.00 for 30 days
Get Started
View all rates
You are the owner of this article.
Edit Article Add New Article
Subscribe | Sign In
Home
News
Sports
Classifieds
Obituaries
Editorial
Business Directory
Things to Do
About Us
e-Edition
2020 Resource Directory
NEWSLETTERS
1 of 7 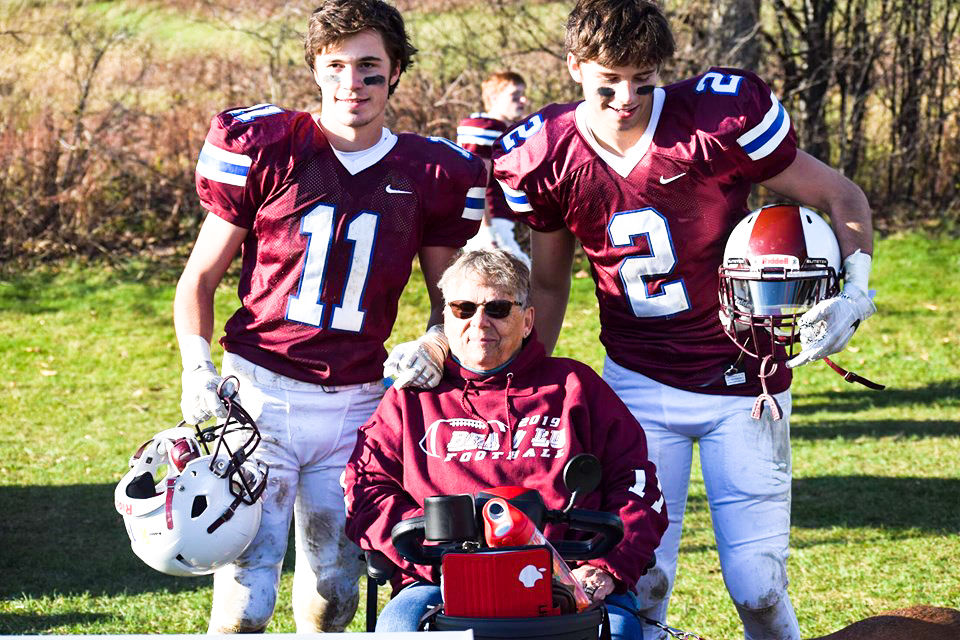 Quinn and Cam Meunier pose for a photo with their grandmother, Lena. 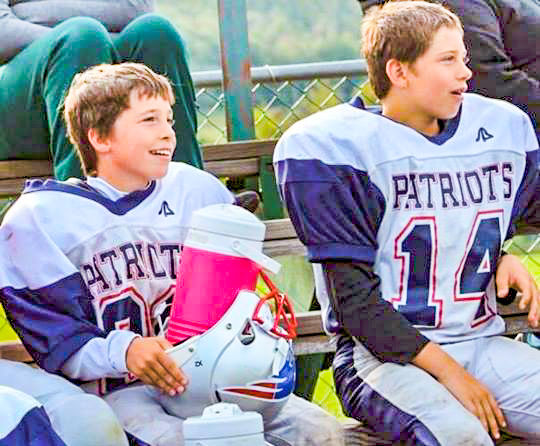 The Meunier boys in the early days with the Patriots Youth Football team. 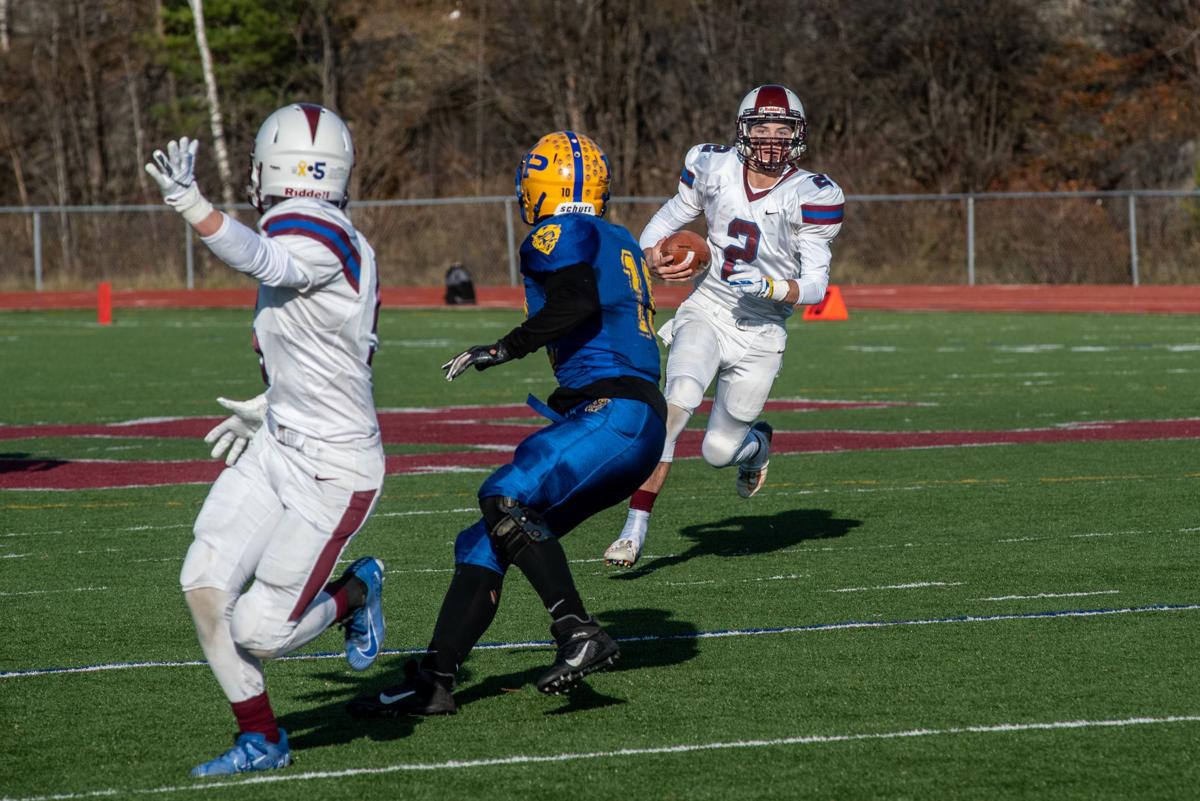 Cam Meunier (2) carries the ball downfield during the 2019 DIII title game in Rutland against the Poultney Blue Devils. 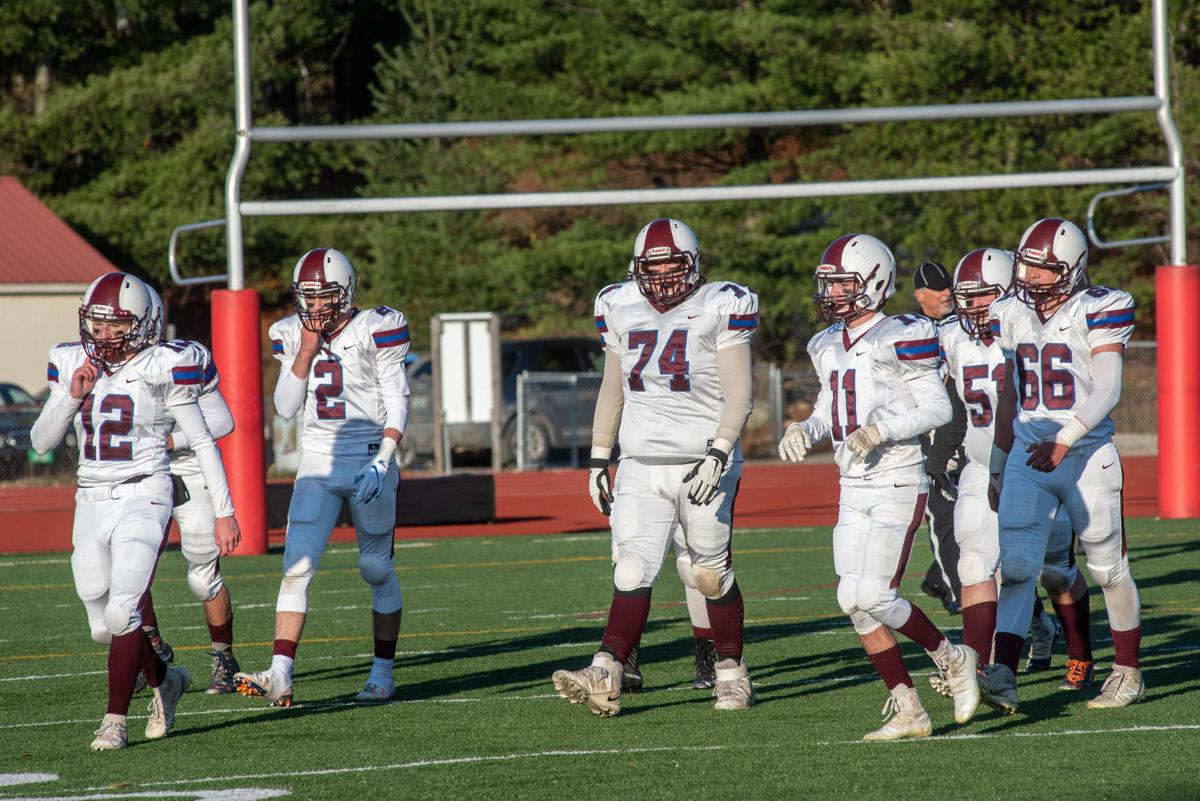 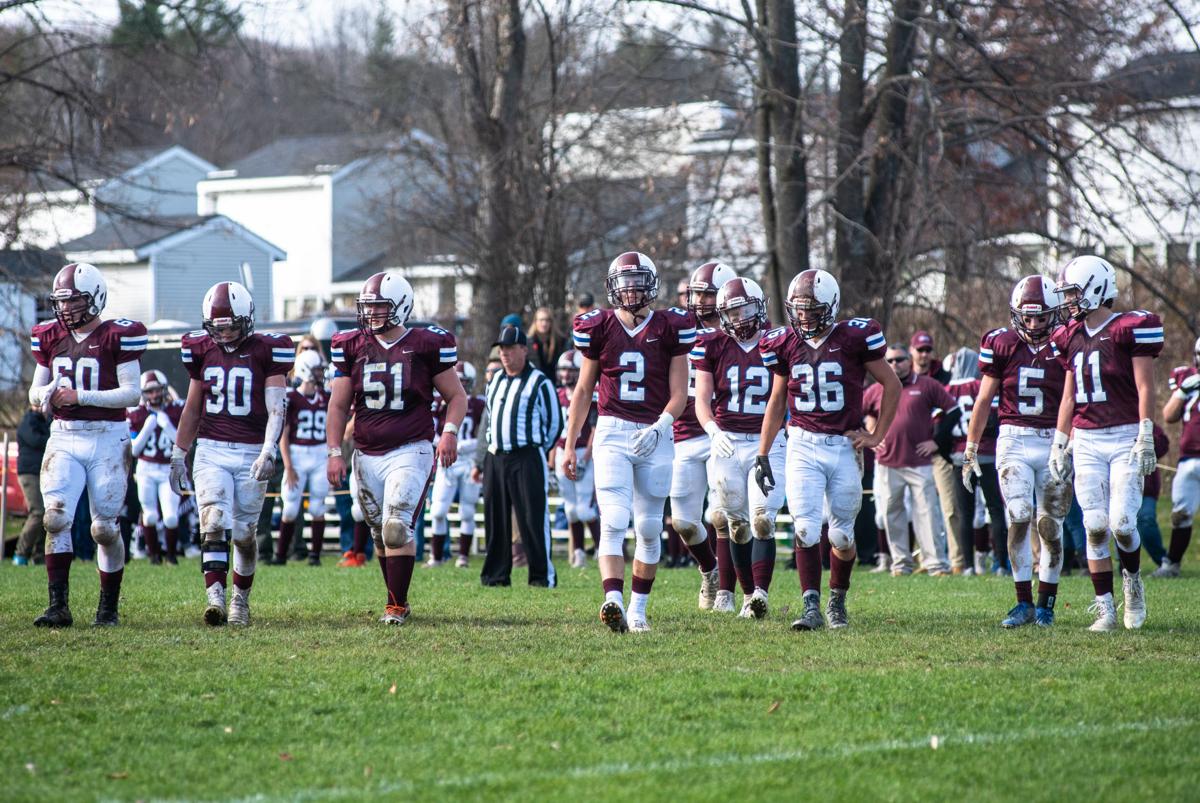 Cam (2) and Quinn (11) and the BFA/LU football team take the field for a home playoff game. 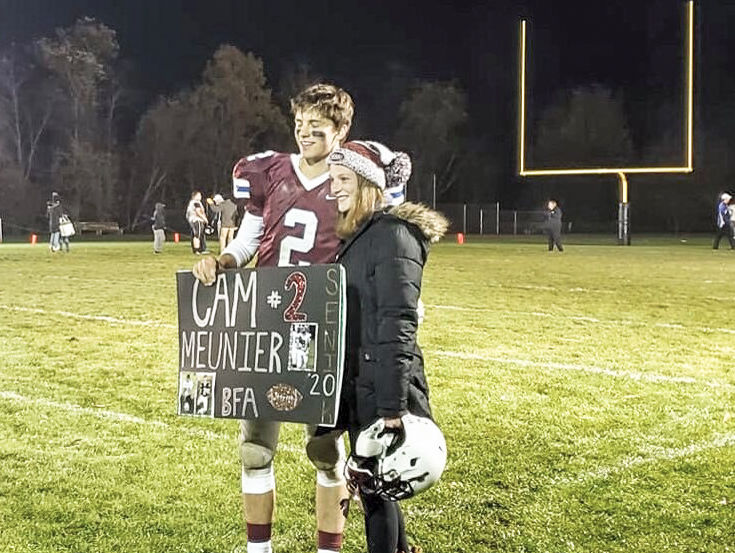 Cam and Delaney Sweet-Werneke pose for a photo on senior night. 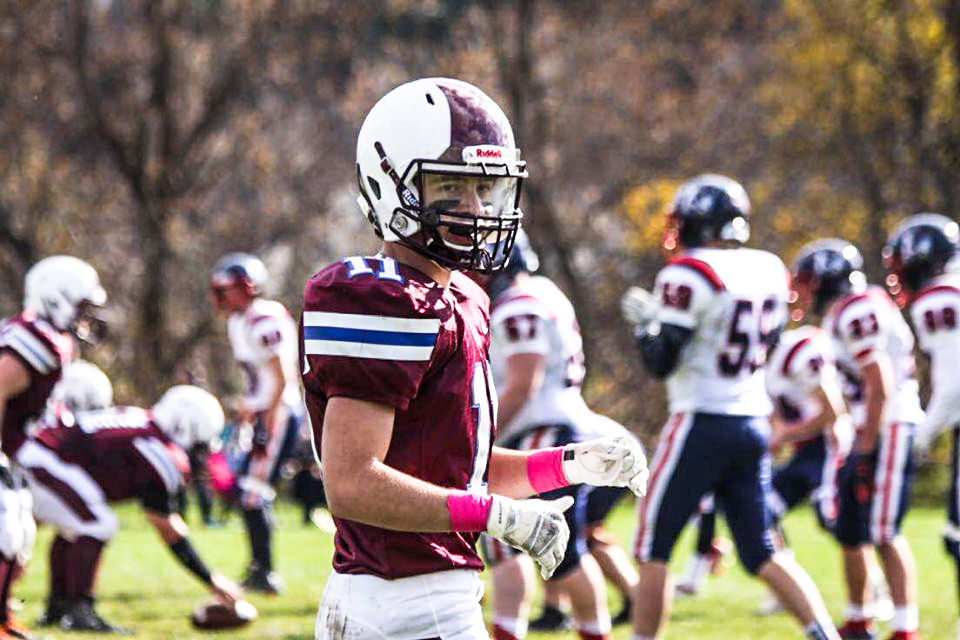 Quinn Meunier in his senior football season with the BFA/LU team.

Quinn and Cam Meunier pose for a photo with their grandmother, Lena.

The Meunier boys in the early days with the Patriots Youth Football team.

Cam Meunier (2) carries the ball downfield during the 2019 DIII title game in Rutland against the Poultney Blue Devils.

Cam (2) and Quinn (11) and the BFA/LU football team take the field for a home playoff game.

Cam and Delaney Sweet-Werneke pose for a photo on senior night.

Quinn Meunier in his senior football season with the BFA/LU team.

FAIRFAX — Cam and Quinn Meunier are part of a class of seniors facing unprecedented challenges in the final semester of high school due to COVID-19 closures.

The two athletes played football and basketball for BFA Fairfax, throughout high school.

“My favorite is football and having that co-team with other schools,” said Cam. “Some of my best friends are from Stowe and Lamoille.”

“Football brought us all together; it’s a brotherhood,” said Quinn.

The team’s trip to Rutland to take on the Poultney Blue Devils in the DIII title game highlighted the program’s success.

“We worked so hard for that. As freshmen, we talked about going to the championship senior year,” said Cam.

“All week before the championship, we had alumni reaching out to us and wishing us the best,” said Quinn.

“A lot of them went to the game wearing their 2012 jerseys and cheering us on; that’s the best thing about a small town,” said Cam.

The Bullets rolled through the regular season, taking a loss in the very last game.

“That loss to Otter Valley was a wake-up call,” said Cam. “It helped us win our semifinal game against them.”

“That semifinal game was really loud! That’s when Josh caught that pick-six, which was awesome!” Quinn recalled, smiling.

“No one thought we’d be contenders at the start of the season. We began opening eyes in the end, and everyone could see how talented of a team we were.”

The brothers laughed as they chatted about their early years with the sport.

“Cam didn’t finish out the season in the second grade,” said Quinn.

“My helmet hurt my head or something,” said Cam, both boys chuckling.

“Noah was always my tackling partner in drills. We have a bond that many don’t have,” said Quinn.

Great coaches can have a tremendous impact on a program.

“I have a strong bond with our varsity Coach Craig Sleeman, and also Patriots coach Don Demar,” said Cam.

“Coach Demar puts his entire heart into that Patriots football league. I love that man!”

“Coach Demar was always one of my favorite coaches growing up,” Quinn agreed.

“Football really hits home in our community. A lot of our coaches were part of starting the program, and they are very dedicated to the teams because they saw how their kids benefited.”

Both Meunier boys also played for Dave Demar and the Bullets’ basketball team.

“Basketball brings football and soccer players together,” said Quinn. “In the fall, we’re on different teams, but in the winter, we are all working toward the same goal.”

This year’s seniors began playing for Dave Demar in the seventh grade.

“He came up with us all the way. We have a good relationship with him, and he’s a great coach,” said Quinn.

Regardless of the sport they’re playing; the brothers have supported each other.

“Cam is a leader and a hard worker in every sport. We’ve always found competition in any sport, even basketball on the mini hoop inside,” said Quinn. “We make each other work harder.”

Quinn recalled two of his favorite football memories with Cam.

“He made this diving touch down and sucked the ball over the end zone. It just broke the line,” said Quinn. “And at the end of the championship game, with under a minute left, he threw me the ball. It was almost a touchdown.

“Not a lot of twins get to play a title game together. Hopefully, our cousins Silas and Shane will carry on that legacy.”

Cam smiled as he had his turn to speak of his brother.

“He’s hard-working, and he’s not afraid; he likes to hit people, and he’s always a leader on the field,” said Cam.

“The play that stands out to me came in our Springfield game. Their quarterback dropped back and dropped a bomb to the receiver.

“Quinn and I were running next to each other, he turned around, popped it up to me, and I started running.”

“It was awesome! Hopefully, one day I can tell my kids about my brother and me being in the title game together.”

Healthy sibling relationships can thrive in athletics, and the Meuniers prove that.

“We use each other as motivation. You can compete, that’s not bad, you’ll make each other better,” said Cam. “We go out and throw the football together, work out together, and stay dedicated and motivated.”

“You can always make sure that your sibling is giving their best! And always congratulate them when they do something good,” said Quinn. “It feels good to be congratulated from someone you’ve always been playing with.”

Both the boys have benefited from family support.

“Our whole family are die-hard supporters. Our uncles and our grandparents, Lena and Jim Meunier; everyone was there for us,” said Quinn.

“Not everyone gets the support from their family like that, and I’ll always cherish it,” said Cam.

Lena and Jim Meunier live across the street from the school, and their basketball hoop is the ‘town hoop.’

“She’s the town grandma; everyone loves her!” said Cam. “We’re grateful to the Fairfax community for all the support over the years.”