You are the owner of this article.
Edit Article Add New Article
Subscribe | Sign In
Home
News
Sports
Classifieds
Obituaries
Editorial
Business Directory
Things to Do
About Us
e-Edition
2020 Resource Directory
NEWSLETTERS
1 of 5 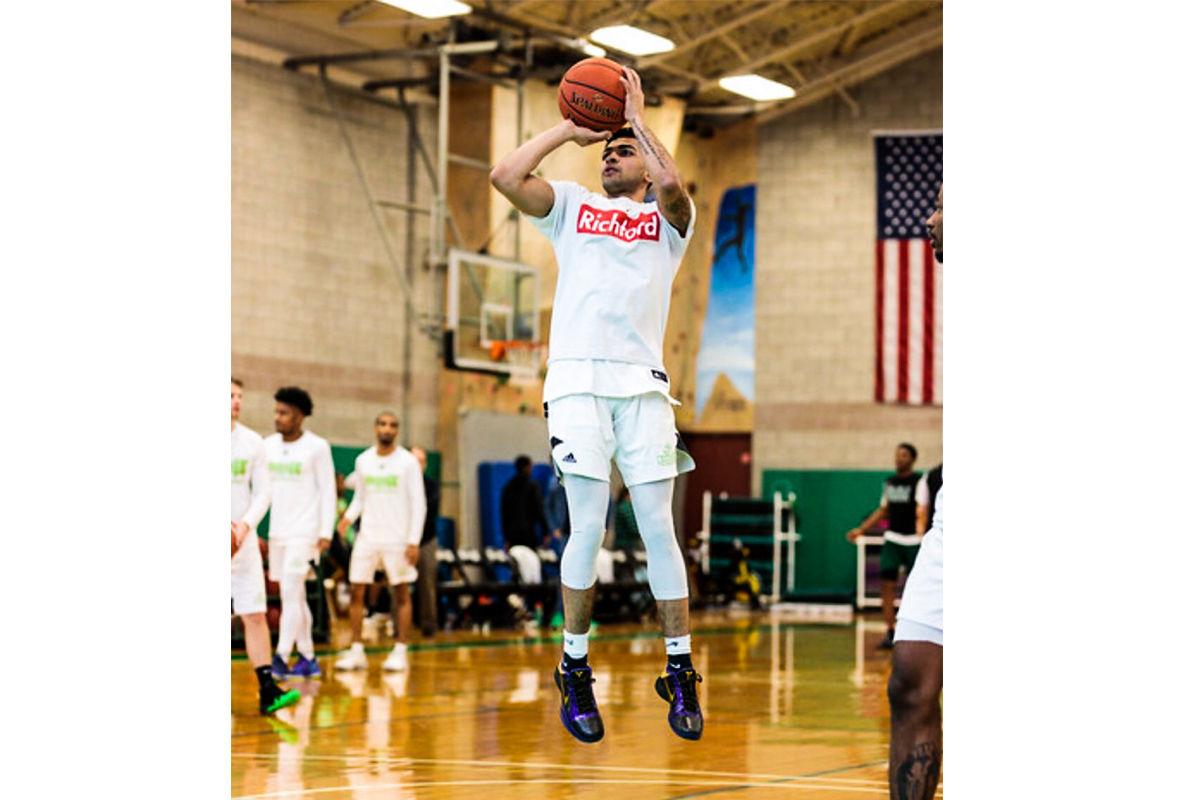 Jeremy Franklin takes a shot in his favorite warm-up shirt before a game with VTC in his senior year. Franklin noted he began wearing the shirt for fun, but after the team kept winning, he got superstitious and wore it for the remainder of the season. 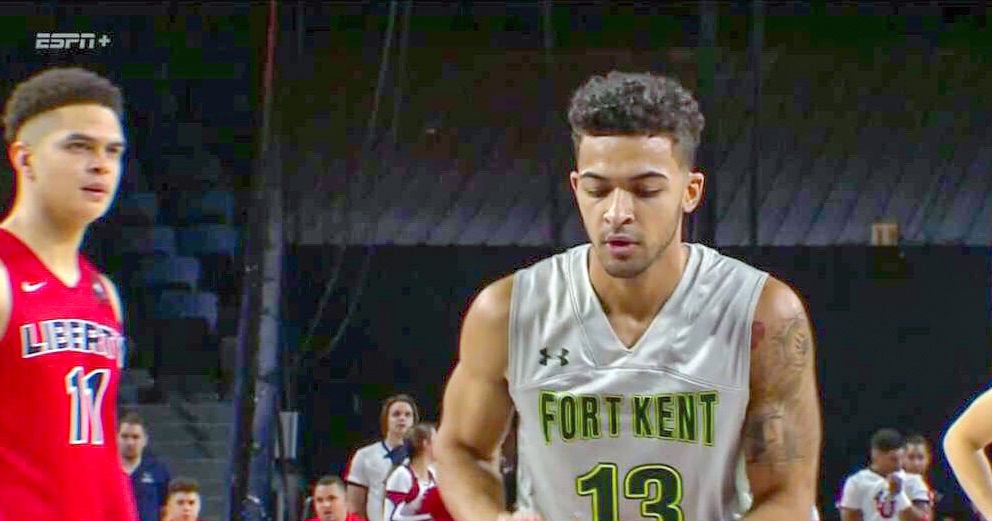 Franklin prepares to take a foul shot while playing against DI Liberty University with UMaine, Fort Kent. The screen shot was taken from a television broadcast. 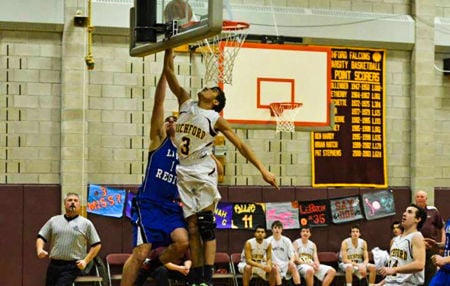 Franklin goes for a chase-down block in a game during his senior year at Richford Junior-Senior High School. 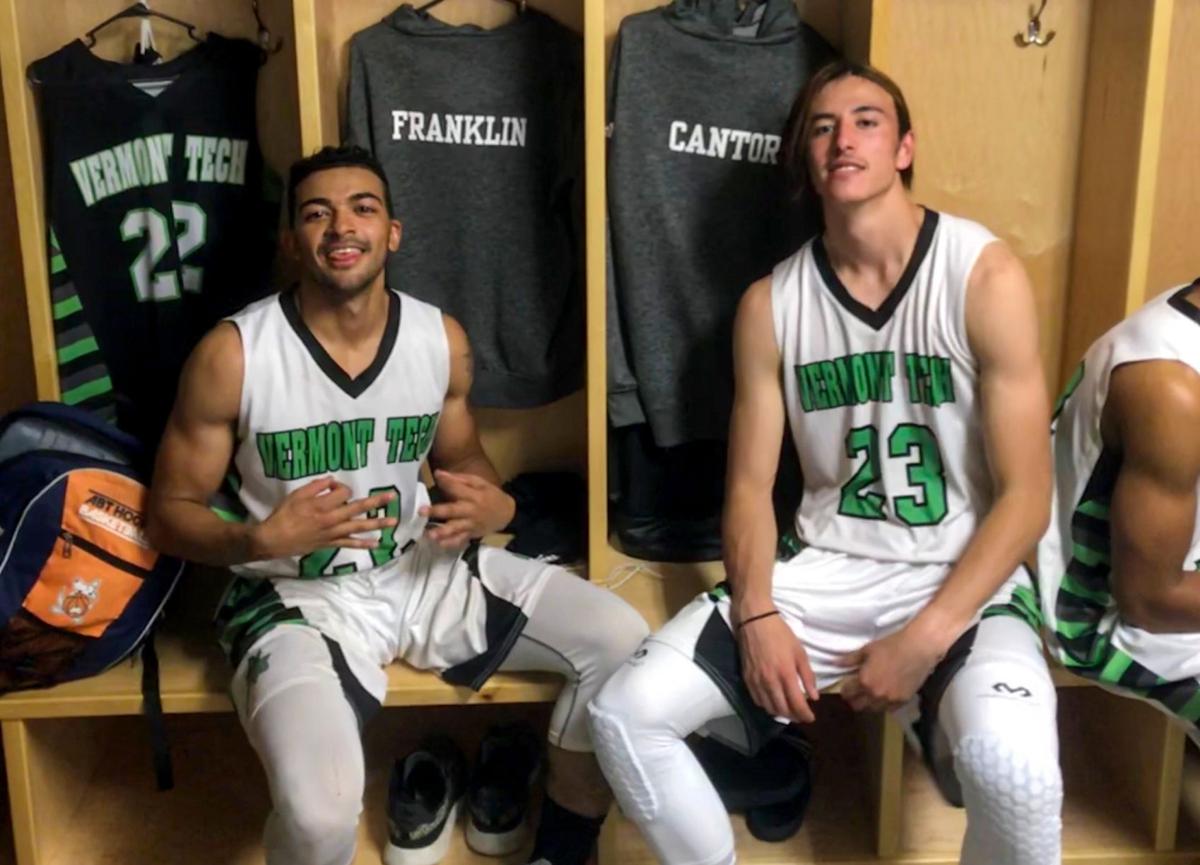 Franklin, in his first year at VTC, poses with his teammate from Australia. 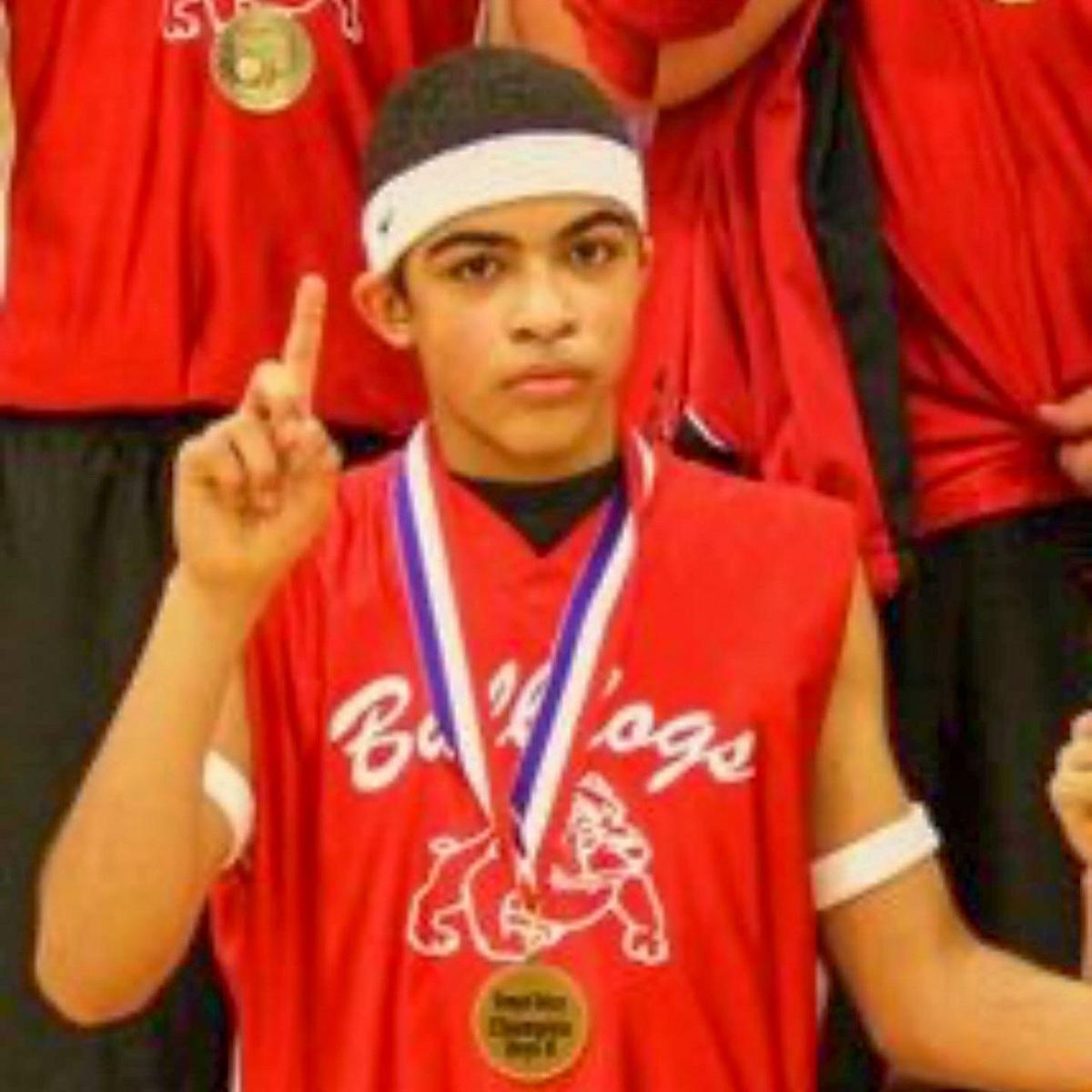 Franklin poses for a photo in middle school after his Bulldogs AAU team won the Newport Rotary Championship.

Jeremy Franklin takes a shot in his favorite warm-up shirt before a game with VTC in his senior year. Franklin noted he began wearing the shirt for fun, but after the team kept winning, he got superstitious and wore it for the remainder of the season.

Franklin prepares to take a foul shot while playing against DI Liberty University with UMaine, Fort Kent. The screen shot was taken from a television broadcast.

Franklin goes for a chase-down block in a game during his senior year at Richford Junior-Senior High School.

Franklin, in his first year at VTC, poses with his teammate from Australia.

Franklin poses for a photo in middle school after his Bulldogs AAU team won the Newport Rotary Championship.

RICHFORD/BURLINGTON — Jeremy Franklin graduated from Richford Junior-Senior High School in 2014. He wasn't sure what he wanted to do with the rest of his life, but he knew he wanted to do in the immediate future.

"I wanted to go to college, and I wanted to play basketball. I knew I needed help, so I joined the Vermont Air National Guard."

Franklin joined the Guard to help with the cost of college; the decision paid him back in other ways as well.

"Going to college and joining the Guard was the best thing I could do. I've been with them for six years, I've had no financial issues, and I got a great job.

"It was a blessing in disguise. Everything was. The only reason I wanted to go to college was to play basketball, but I left with a high paying career, and I traveled all over the world."

In September of 2014, Franklin attended a technical school (NAME) in Witchita Falls, TX, where he trained to be an electrician.

When he finished his time at the tech school, he enrolled at Lyndon State College. Plans for basketball didn't pan out, and Franklin left the school.

Shortly after, he was deployed for seven months with the Guard.

"I found myself emotionally as an adult in Dubai. I was in a high-stress situation, and there was no coming back home for the weekend," said Franklin.

While in Dubai, Franklin's brother, Mahlik, went to Barre with the Enosburg Hornets to contend for the DIII boys' basketball state title.

The brothers shared a bond with basketball, and Franklin wasn't going to miss the game.

"I was up at 2:30 in the morning watching that game," said Franklin, chuckling.

In his downtime, Franklin lifted weights and worked on basketball drills. He had his sights set on attending college and playing ball when he got back to the states.

"I ended up choosing Vermont Technical College, and it was the best decision I've made," said Franklin.

"It had been two years since I had graduated from high school, and no one knew who I was.

"I was 22 years old, much stronger, and I'd played a lot of basketball with people from all over the country."

Franklin joined the VTC squad intending to be the guy who did 'all the little things.'

"My coach embraced that, and I was able to work my way up the ranks."

Coming from a small DIV school where he 'took any shot' he wanted to, Franklin found himself on a very successful college team.

The Green Knights won over twenty games that season and made it to the National Tournament, where they lost in the tournament championship game.

Franklin suffered an injury that sidelined him for the summer, but in 2018, he transferred to the University of Maine at Fort Kent.

This time Franklin, who is 5'10", was working against guys who were almost a foot taller.

"My coach told me he thought I was taller when he'd seen me on film," said Franklin, chuckling.

Playing for the Fort Kent Bengals put Franklin on a national stage.

"I was able to play on ESPN! I never thought that would happen!" said Franklin, smiling.

When the Bengals played DI Liberty University, Franklin made it onto the television broadcast.

"I had never seen that many people in a building before in my life. You can see in the video, taking a free throw, and my legs were shaking, and I was breathing heavily."

Franklin recalled other things that stood out--the tanks of Gatorade, the security escort, and the kind words of the commentators about him and his brother Mahlik, who was also on the team.

During his time at Fort Kent, Franklin was driving to his drills with the Guard, sometimes getting back from games at 2 am and jumping in his car immediately after to drive back to Vermont.

Although things were going very well, when the second semester came, Franklin faced a different challenge at Fort Kent.

"I was struggling with sadness. I was doing something I really wanted to do, but the sadness wouldn't go away.

"I talked with my mom--the first person I'd ever told about it. The military reached out to me and offered me a full-time job until school started back up for me.

"I had arrived at Fort Kent weighing 175 pounds, by the time I got home from Fort Kent, I had lost 30 pounds.

"I felt like I had quit on my team, but knew I needed to be home. I was 23 years old, and I didn't know what was wrong with me."

Back in his home state, Franklin found things heading in a better direction.

"I got myself going to work, working out, and hanging out with friends. I met a great girl, and things started to come back into place."

He even started playing basketball again, finding that he still had a love for the game.

"It hit me that I'd like to play again. I called my VTC coach in July and asked him if he needed anyone. I told him I wanted to give it one last shot."

Franklin joined the team in the 2019-2020 season, but when he arrived, he learned his coach was leaving to take another position.

"We were all upset, but our new coach was awesome. We didn't lose a single home game during the regular season (first time in school history), and he led us to another conference championship."

The final game was one Franklin will not forget.

"We lost the conference championship game by one point at the buzzer in double overtime," said Franklin. "You wonder how you'll go out in your last game, and if you'll be satisfied--I was."

Looking back over his career, Franklin is grateful for all the steps in his journey.

"I asked my first coach why he didn't take me, and he told me I was a super athletic kid, but I was immature, and I wasn't coachable.

"Going into my sophomore year at Fort Kent, I made it my goal to do everything my coach told me to do and never give him a reason to take me off the court.

"That all translated to my senior year at VTC. My coaches told me that year that I was the most coachable player on the team. They told me that no matter what they did, I would give maximum output, and they trusted me to do whatever they asked me to do."

In the championship game at VTC his senior year, Franklin waited on the bench the entire first half. When he got in during the second half, he gave it his all.

"I couldn't have played a better game. I'm hard on myself, but I can actually say I did everything I could do--I was coachable, I scored, I was a good teammate," explained Franklin.

"I left the gym that day crying, but I left knowing I could move on. It was a really weird feeling.

"It took me six years to do all this stuff, and it was long, sad, happy, exciting--I was doing things I never thought I'd do."

Franklin smiled as he recalled his early days on the Richford basketball team.

"I was arrogant. I thought I was the man. I got humbled really quickly when I wanted to play this game at the next level."

While in Texas, Franklin played intramural basketball with guys at the tech school, many who were DI caliber athletes.

"One kid was supposed to play for some big school. He went on a fast break in a game and pulled out a windmill," said Franklin.

"It was good preparation as I moved on to the next phase, but it was more humbling than anything."

Through all the changes and challenges, Franklin had the tireless support of the ones who love him most.

"I had so much support from my family through it all--from the hours of training I did with Mahlik, to my mom, my grandma Jean, my dad, and my girlfriend, Megan, watching my games through live stream.

"A lot of small-school Vermont kids never think this stuff is possible, but you just have to find your role and not quit," said Franklin.

"I was never a gifted athlete or the best shooter. To be able to see what I've accomplished with what I had has been good."