Starting at
$5.00 for 30 days
Get Started
View all rates
You are the owner of this article.
Edit Article Add New Article
Subscribe | Sign In
Home
News
Sports
Classifieds
Obituaries
Editorial
Business Directory
Things to Do
About Us
e-Edition
2020 Meet Your Business Community
2020 Resource Directory
NEWSLETTERS
1 of 6 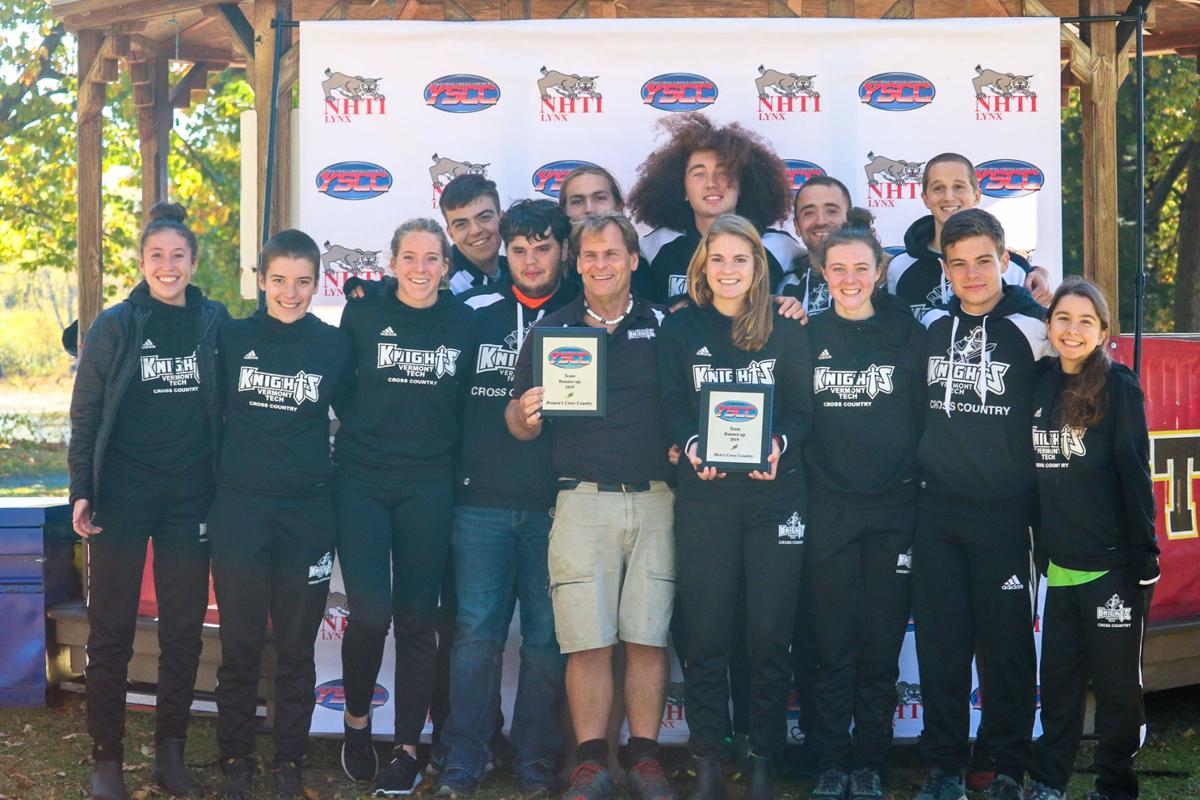 The VTC men’s and women’s cross country teams pose for a photo after both teams finished second in the conference. 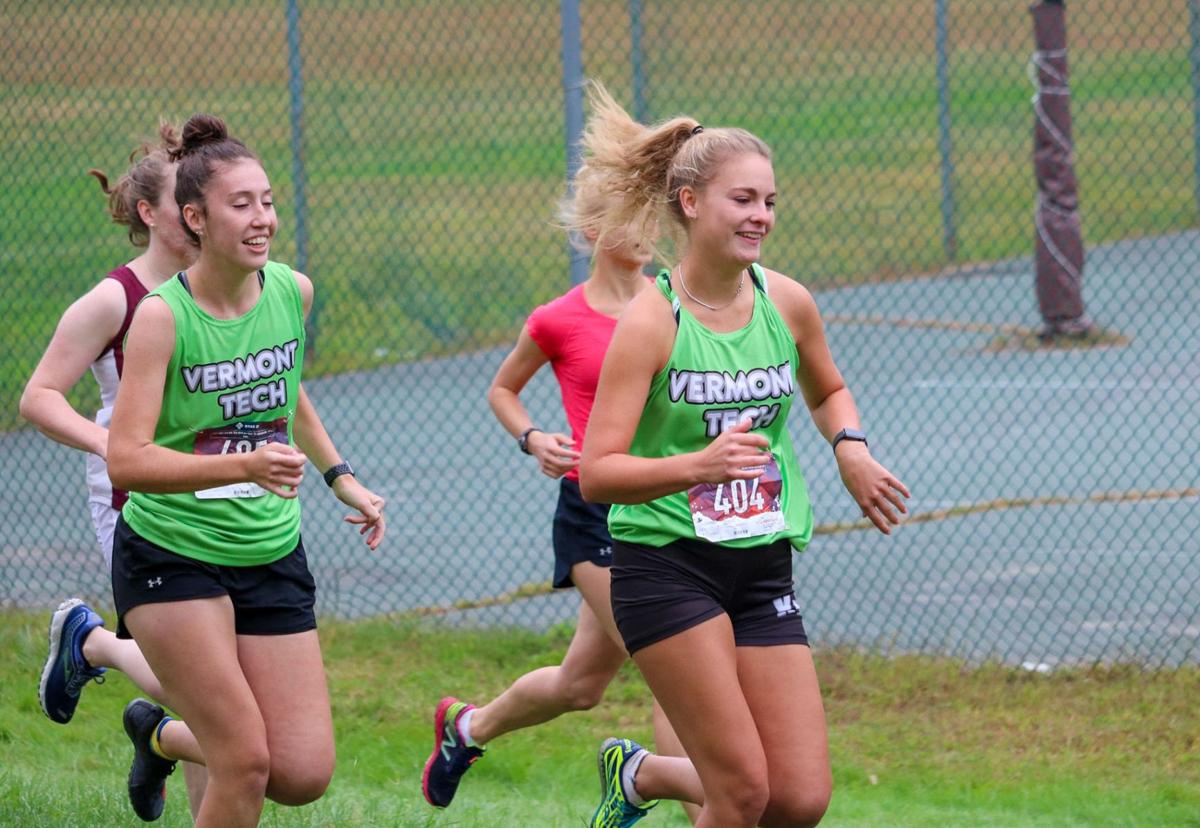 Angela Lazzaro (left) and Emma Sanders (right) race together in the pre-conference race. 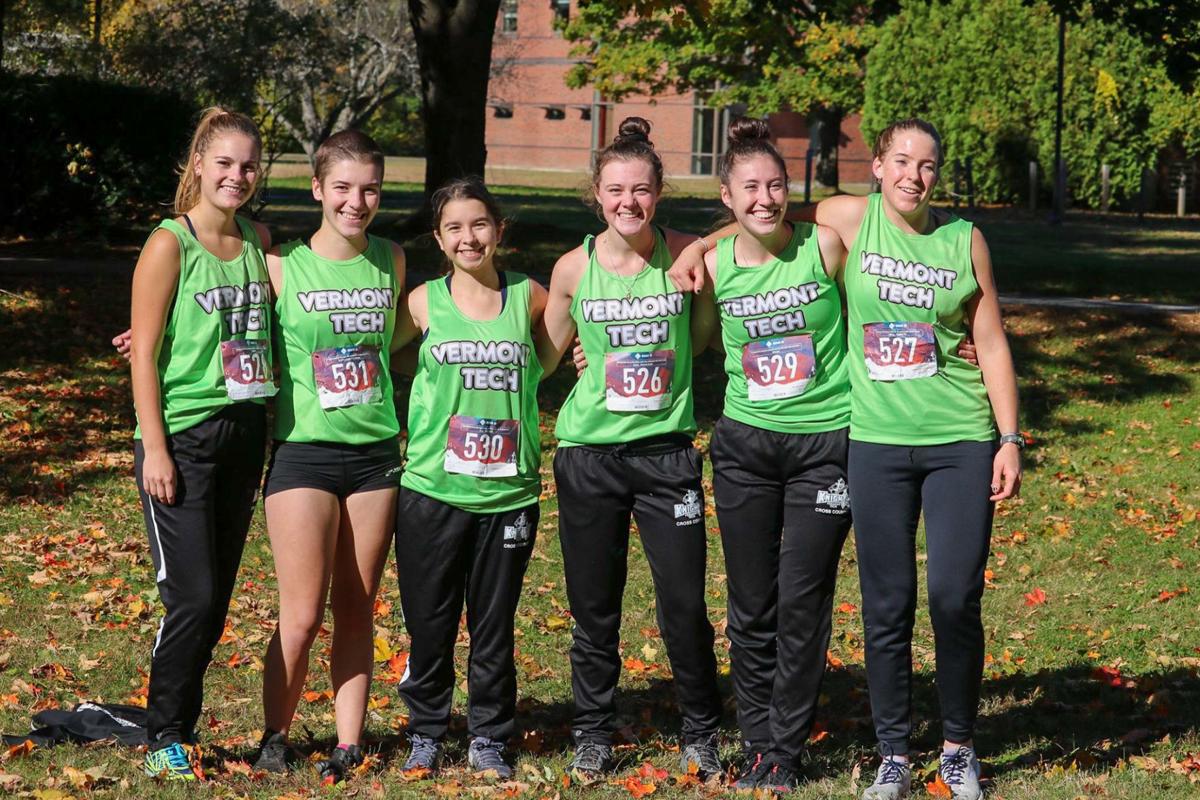 The VTC girls’ cross country team is all smiles before the conference race in October. Emma Sanders stands to the far left, and Angela Lazzaro is second to the right. 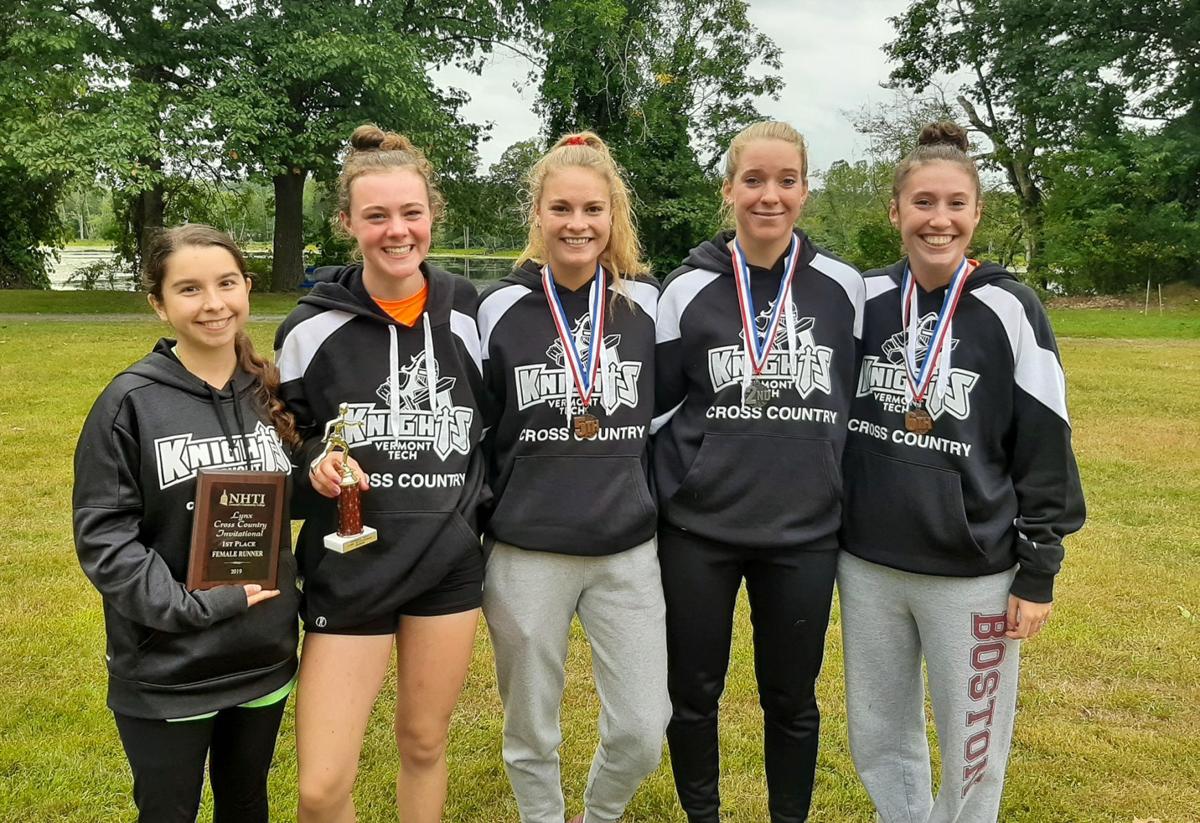 Emma Sanders (center) and Angela Lazzaro (far right) stand with the VTC cross country team after after a pre-season race this fall. 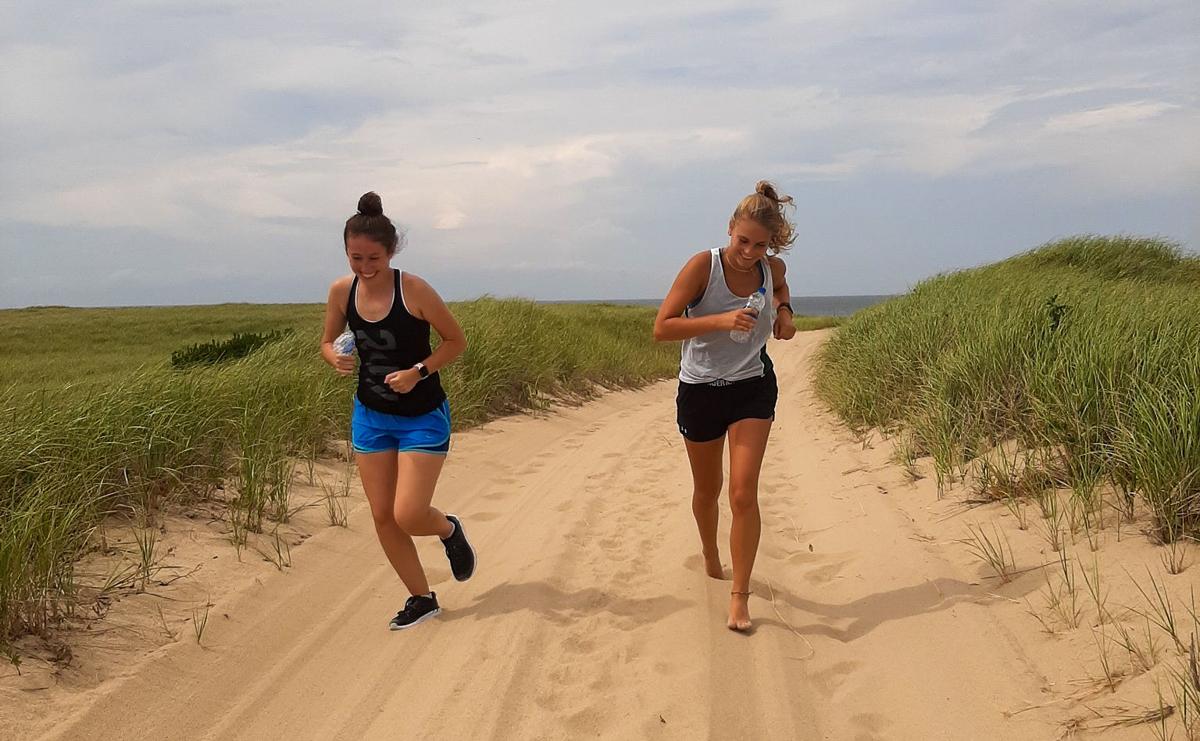 Angela Lazzaro and Emma Sanders run at the Cape during the team’s week-long training retreat. 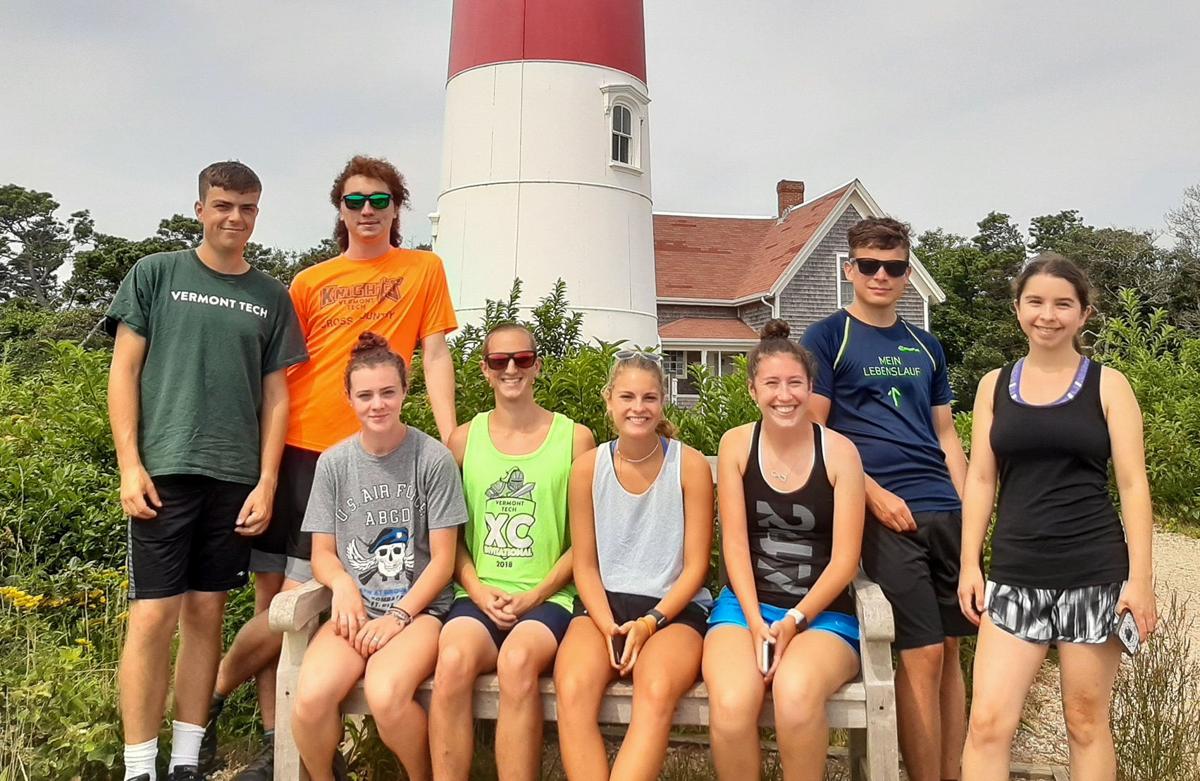 Emma Sanders (seated center) and Angela Lazzaro (seated beside Sanders on the right) pose with their VTC teammates during the team’s August trip to Cape Cod.

The VTC men’s and women’s cross country teams pose for a photo after both teams finished second in the conference.

Angela Lazzaro (left) and Emma Sanders (right) race together in the pre-conference race.

The VTC girls’ cross country team is all smiles before the conference race in October. Emma Sanders stands to the far left, and Angela Lazzaro is second to the right.

Emma Sanders (center) and Angela Lazzaro (far right) stand with the VTC cross country team after after a pre-season race this fall.

Angela Lazzaro and Emma Sanders run at the Cape during the team’s week-long training retreat.

Emma Sanders (seated center) and Angela Lazzaro (seated beside Sanders on the right) pose with their VTC teammates during the team’s August trip to Cape Cod.

“This is the strongest showing by any Vermont tech Women’s team of any sport,” said VTC cross country coach Bob Dunkle.

Sanders, a 2019 graduate of BFA St. Albans, attends the Williston campus, an hour away from the Randolph campus where the cross country team trains.

“It’s a difficult balance with her workout as a student and training on her own for the most part,” said Dunkle, “but Emma is a super dedicated athlete and a strong part of the team’s success.”

Angela Lazzaro, a 2019 graduate of Milton High School, was selected by the team as this year’s captain.

“Angela has been a great team leader setting a strong example of training and helping the team with timing and record-keeping during training sessions,” said Dunkle.

Messenger Sports caught up with Lazzaro and Sanders over Thanksgiving break to chat about the success they enjoyed in their first season with the VTC cross country team.

The two girls didn’t know each other before they ran for VTC, but they did keep tabs on one another through the Strava app.

“We could see each other running,” said Sanders, “and I knew she was from Milton, but I didn’t know her.”

“I saw this girl on the app who was really close to me in time, but I didn’t know how she was,” said Lazzaro, chuckling.

The two finally met when the VTC cross country team traveled to Cape Cod to spend a week bonding and training on the beach.

“I think about the car ride down compared to the car ride home; we were so close after that week,” said Sanders.

Lazzaro, who began running in the fifth grade with Girls on the Run, had planned to run for VTC, signing with the team in the spring.

Sanders, who ran for two years in high school, decided to run after she graduated from BFA St. Albans.

“Our college meets were smaller than our high school meets,” said Lazzaro, “but the distances are longer.”

A typical women’s college cross country race is a 6k compared to the 5k races in high school.

“We all ran our first 6k meet under thirty minutes,” sais Sanders. “Coach Dunkle said he’s never had a team that had four girls who ran those times.”

Over the season, Lazzaro set several personal records in the 6k, the best, a 28:35 minute finish.

Sanders worked out once a week with the team in Williston, making the trip on the day of the speed workouts.

“The college races have smaller numbers than our high school meets. That can be challenging because you have fewer people to pace off of,” said Sanders.

“When you race in high school, you get to know the girls you race against and how fast they are,” said Lazzaro. “I knew who I wanted to pace with.”

Dunkle helped his runners by scouting the field ahead of time and giving them information on who they should be looking to pace beside.

“We were counting all the time to make sure we were on pace with the right people,” said Sanders, laughing.

At the end of the race, the VTC team came in second at the conference championships and earned a trip to Virginia Beach for the National Championship race on November 8th.

“The course at Nationals was flat, so you could see the first place person when you were in the back,” said Sanders.

“You could see the lead runners rounding the corner, and they looked so far away!” said Lazzaro.

The girls watched the lead runner from VTC, Cassidy Lewis, finish ahead of them. Lewis placed 11th, finishing as an All American.

“When we saw her finishing well, it really motivated us,” said Sanders.

The day of the race was forecast to be extremely windy, so Coach Dunkle made sure to prepare the team ahead of time for the unusual conditions.

“He made us feel the wind and note where we’d need to be to draft off of our opponents,” said Sanders.

“We formed a triangle, like geese, and stood in different places to find out where we’d need to be to get out of the wind,” said Lazzaro.

The strategy was very effective, the girls noticed, and few other racers were employing it on the course.

Schools from all over the country were represented at the race, and the girls enjoyed seeing the different running ‘cultures.’

“It was fun listening to the chants that different schools used before the race,” said Sanders.

“Our coach predicted we’d be fifth based on the stats. It was cool to be able to perform the way he needed us to,” said Sanders.

Winning and traveling is a highlight for any athlete, but both the girls appreciated another aspect of their season at VTC.

“We were so close as a team. We had parents and other coaches comment on the camaraderie of our team,” said Lazzaro.

Coach Dunkle was a big part of building bonds and building confidence and skill in his racers.

“Bob makes things fun, but he can also get really serious. He knew how to get us where we needed to go,” said Sanders.

“Bob is a coach who supports every person and thinks every person has the potential to be a great runner,” said Lazzaro. “He knows how to train runners, and he has reasons for all that he does.”

“When we did hard workouts, he’d tell us what our bodies were doing and why we were doing it,” said Sanders. “It was really nice to have that knowledge and know how it’s helping us.”

Dunkle sent the runners stats about athletes they’d be competing against to prepare them for the race ahead.

“He always emailed us after the race and complimented us on what we did well. He’d also let us know what we could improve,” said Lazzaro.

“He loves coaching, and you can tell,” said Sanders. “That’s such a good influence on us.”

Due to the different hours, college students had available to practice, Dunkle would often run with different groups at different times.

“There were days he’d run 24 miles,” said Lazzaro. “He loves running and he’s a great runner.”

The girls hope the success of the program will draw more runners to the school.

“I never thought I’d go to Nationals coming to a small Vermont college,” said Sanders. “This has been a great experience.”

All of the girls’ experience with running began at the elementary and high school level, and Sanders expressed her gratitude for the running community at BFA St. Albans.

“I joined the cross country team at BFA as a junior, and I’m so grateful to the Mashtares for recruiting me,” said Sanders. “Coach Mashtare helped me develop a passion for running, and now I can’t picture my life without it.”

Mashtare kept track of both Sanders’ and Lazzaro’s progress through their first college season.

“Coach Mashtare even texted me after races to see how I was doing,” said Sanders. “He has a passion for running, and he was so supportive of us.”