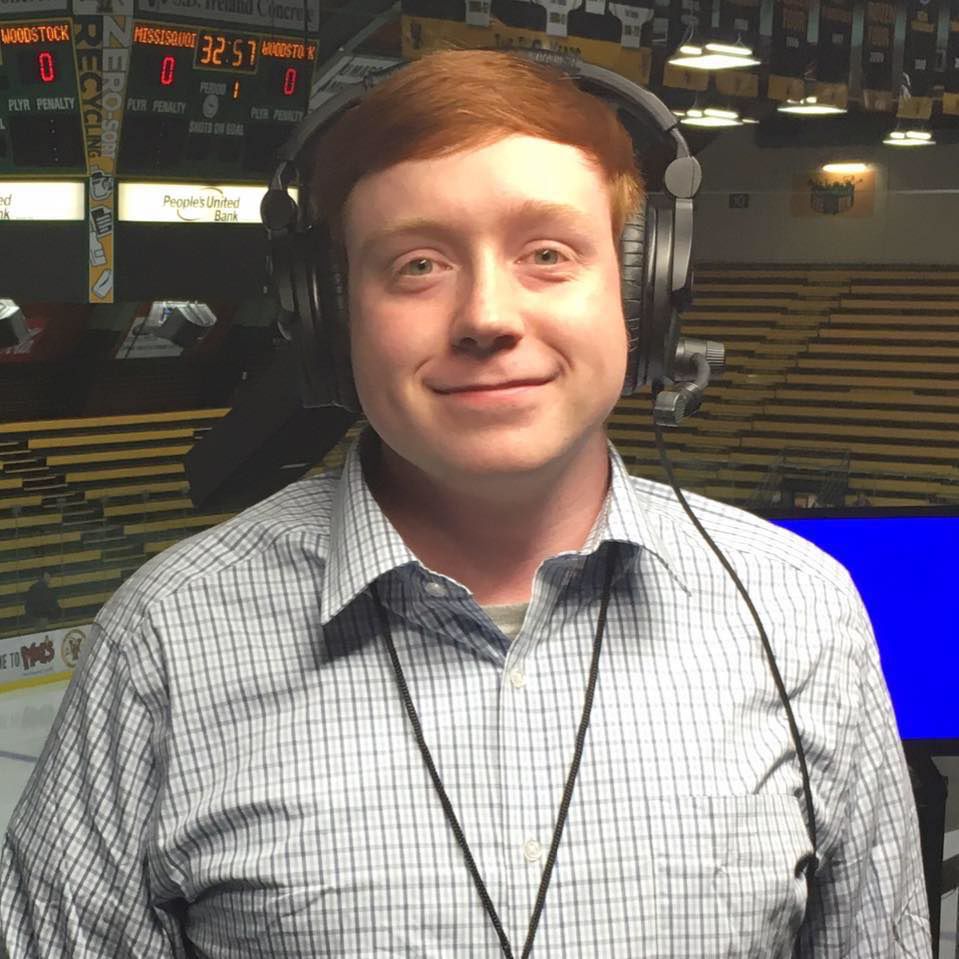 Nick Mumley calling the MVU and BFA championship games at Gutterson in 2019. 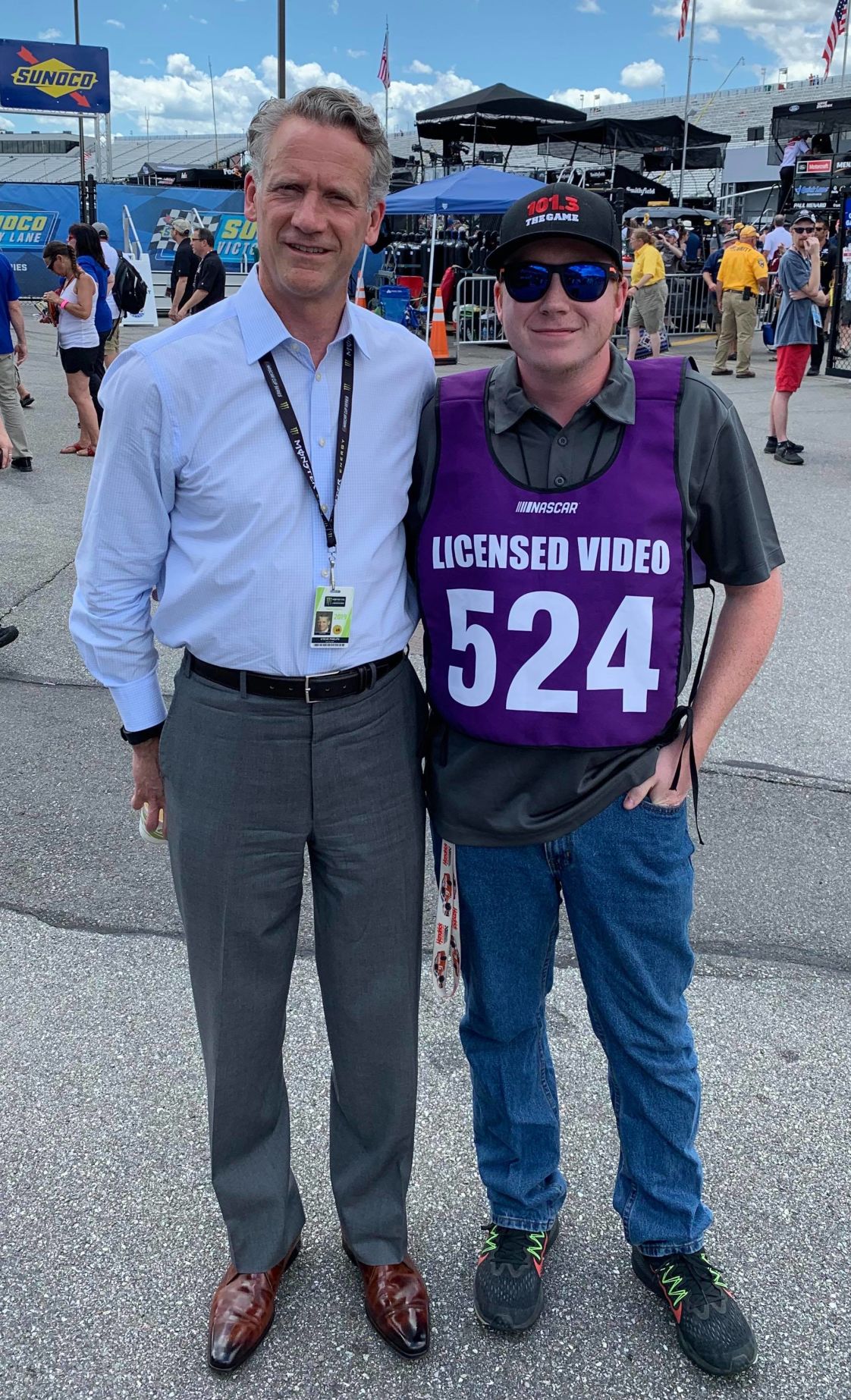 Nick Mumley stands with NASCAR President Steve Phelps, who I’ve had as a guest on my show. 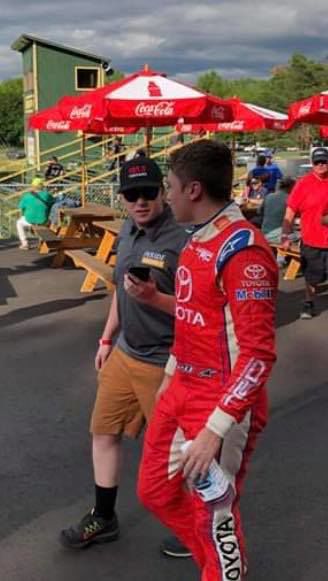 Nick Mumley calling the MVU and BFA championship games at Gutterson in 2019.

Nick Mumley stands with NASCAR President Steve Phelps, who I’ve had as a guest on my show.

SWANTON — Nick Mumley has been calling games for as long as he can remember.

“I’ve wanted to do this since I was eight or nine years old,” said Mumley. “I used to sit at home and watch Bruins or Celtics games and do my play-by-play into the TV.”

“I grew up with a radio background,” said Mumley. “My biological father was a DJ at WWSR in St. Albans in the 80s. He moved on to WVMT in Burlington.”

Mumley lost his father to illness at a young age, but his stepdad also had a love of broadcasting.

“My stepdad is really good with the engineering side--putting together the parts and pieces that put a radio or TV station on the air,” said Mumley. “So, I’ve been able to learn a lot from him.

When he was 15, Mumley began calling games for Northwest Access Television. In his senior year of high school, he called basketball games for MVU.

“I was so nervous before my first game doing play-by-play, but I thought back to when I was young, announcing the televised games to myself, and I felt comfortable after that.”

Mumley attended Lyndon State College and traveled with a high school from New Hampshire for a season as part of his degree.

He opted not to continue his college career, but he did continue to broadcast. In the fall of 2018, he called thirty games for Northwest Access Television.

“I think the best way to get better is to get experience. Any chance I’ve gotten to do anything with broadcasting, I’ve done it,” said Mumley,

Doing the play-by-play of Franklin County games has given Mumley some lasting memories. One of his fondest was the MVU girls’ hockey state championship game in 2019.

“There wasn’t a single state championship won at MVU when I attended,” said Mumley. “To be up in the booth calling that game was really special.”

A boys’ basketball game between MVU and Enosburg in 2018 also stands out.

“That game came down to a last-second shot,” said Mumley. “Every time in-county teams play each other, it’s always bigger and a little bit more special.”

“The game went into overtime with a trip to Patrick on the line for BFA,” said Mumley.

The Division-I softball state championship between BFA St. Albans and MVU was another favorite.

“It’s not very often you see two Franklin County teams playing for a DI championship,” said Mumley. “On top of that, it was one of the best softball games I’ve seen.”

During the 2018-2019 season, Mumley called almost every one of the Bobwhite hockey games.

“We were able to carry those games live with Northwest Access, and we had a ton of people viewing and interacting with the broadcast,” said Mumley.

“There’s so much history with BFA hockey, and when you follow the players all year long, you tend to adopt teams,” said Mumley, “even if you graduated from their rival high school, that’s ten minutes down the road.”

“We were all over the tracks in the summer--Thunder Road and Airborne,” said Mumley. “It was really enjoyable for the listeners and for me. I think the drivers enjoyed the coverage, too.”

Mumley had the opportunity to travel to the New Hampshire Motor Speedway to provide live coverage of a Nascar Race this summer.

“I got to meet a lot of really cool people on the radio and TV side of things and see what goes on behind the scenes at a Nascar race,” said Mumley.

“There’s a big following for stock car racing up here. I like racing as much as I like baseball, basketball, football, or hockey.”

Mumley prepares for a live broadcast by keeping a close eye on the players and identifying them with their numbers while they warm-up for a game.

“When you’re on the radio, you’re the eyes of the listener, and there really shouldn’t be any times you’re silent,” said Mumley.

“With TV, your role changes. Your job is to provide names, numbers, and insights people at home don’t know about.

“Every little bit of information I can bring is going to make the broadcast more interesting to the people who are watching.”