Starting at
$5.00 for 30 days
Get Started
View all rates
You are the owner of this article.
Edit Article Add New Article
Subscribe | Sign In
Home
News
Sports
Classifieds
Obituaries
Editorial
Business Directory
Things to Do
About Us
e-Edition
NEWSLETTERS
1 of 6 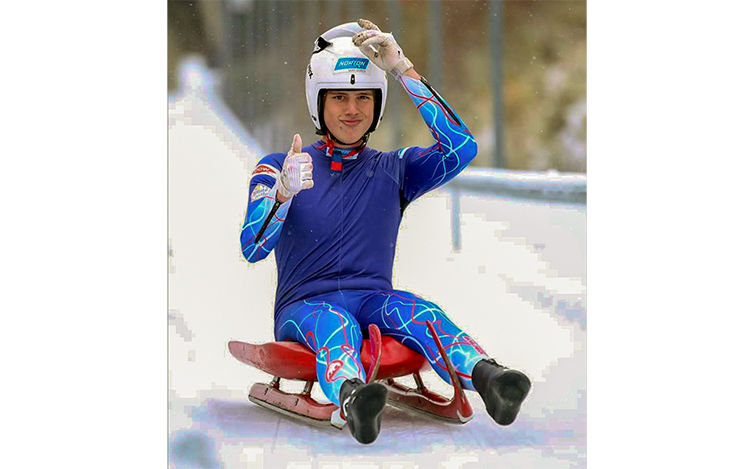 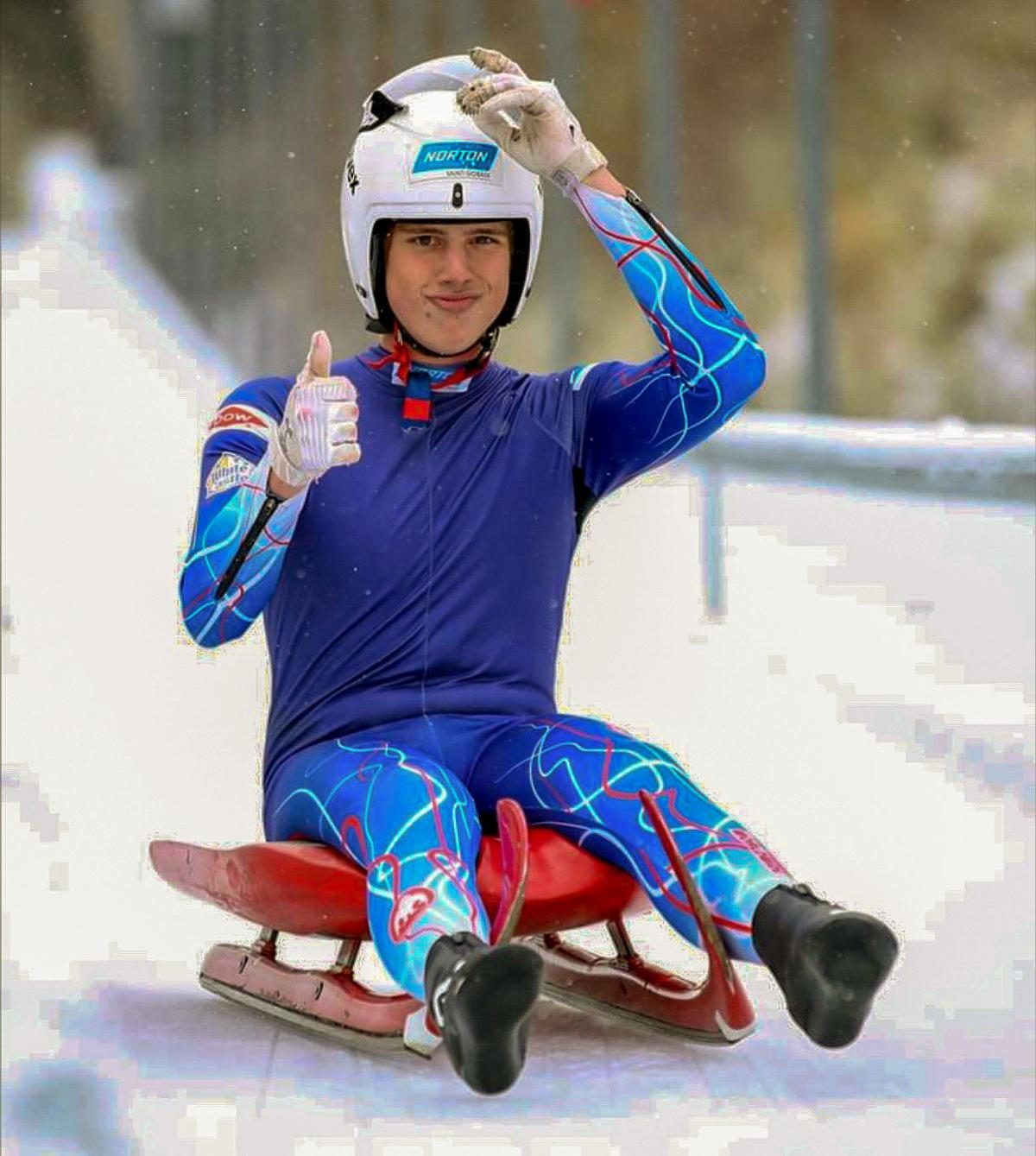 Hunter Harris gives a thumbs up after crossing the finish line at the World Cup in Koenigsee, Germany, last month. 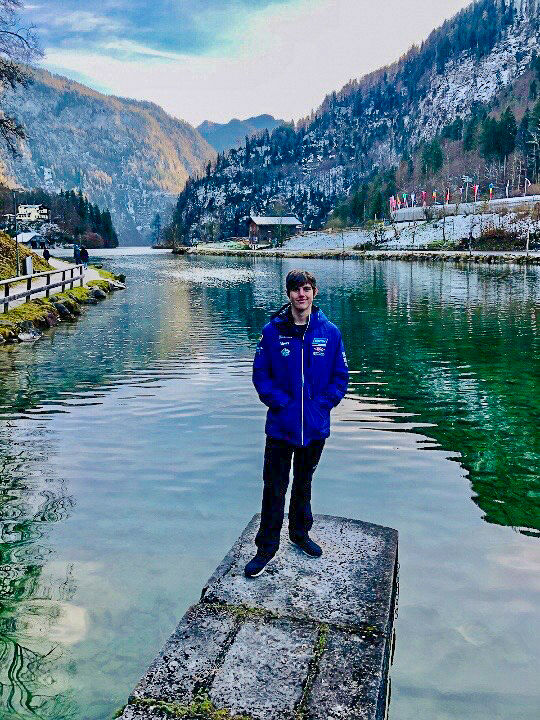 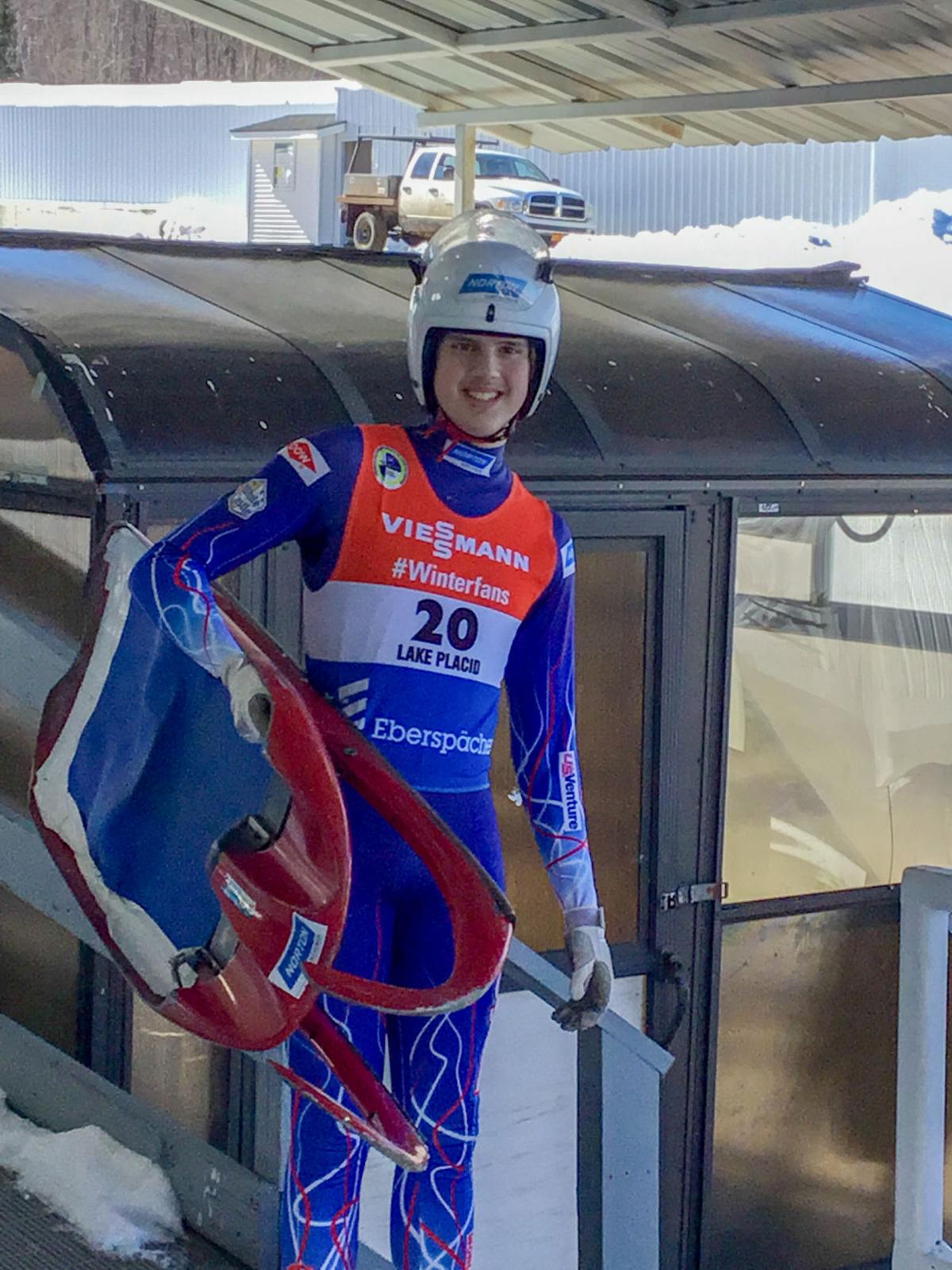 Hunter Harris stands with his sled during a competition this year. 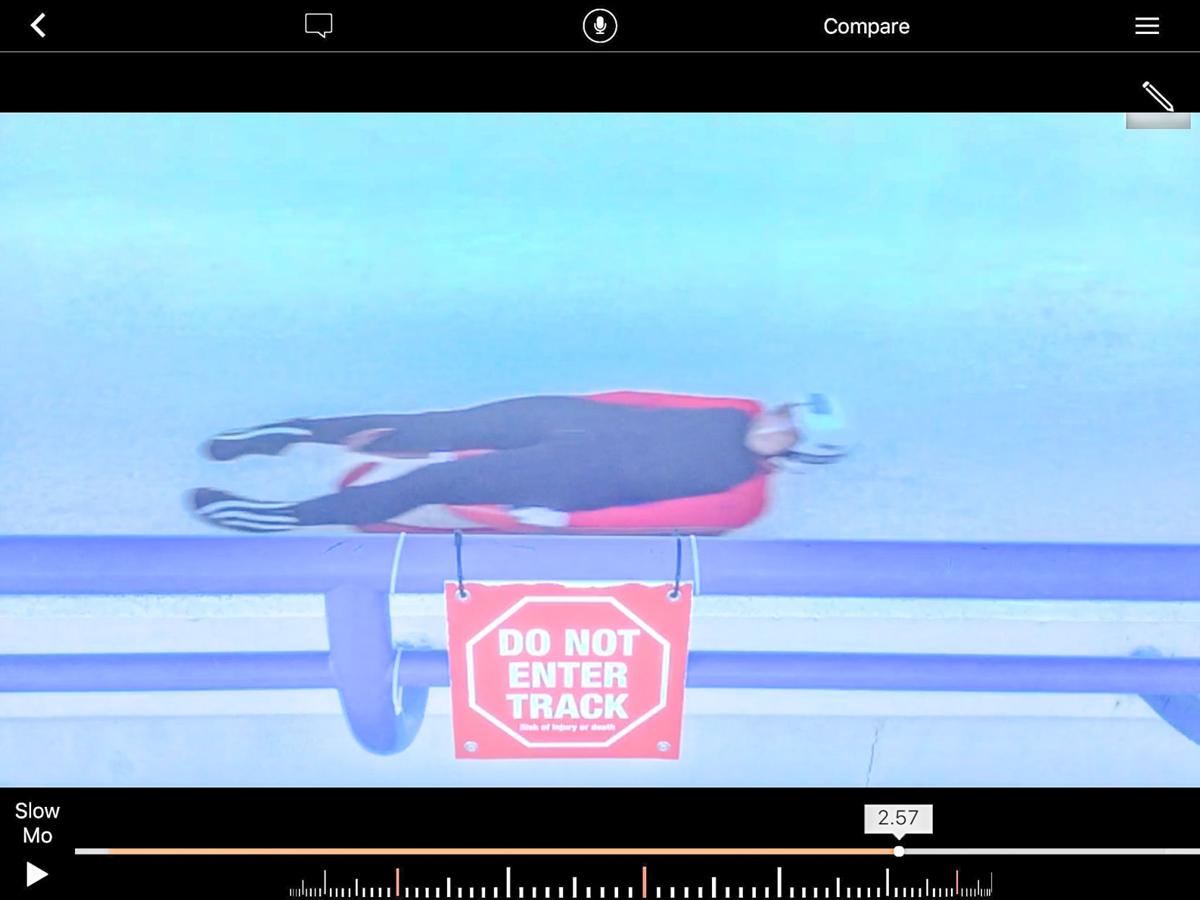 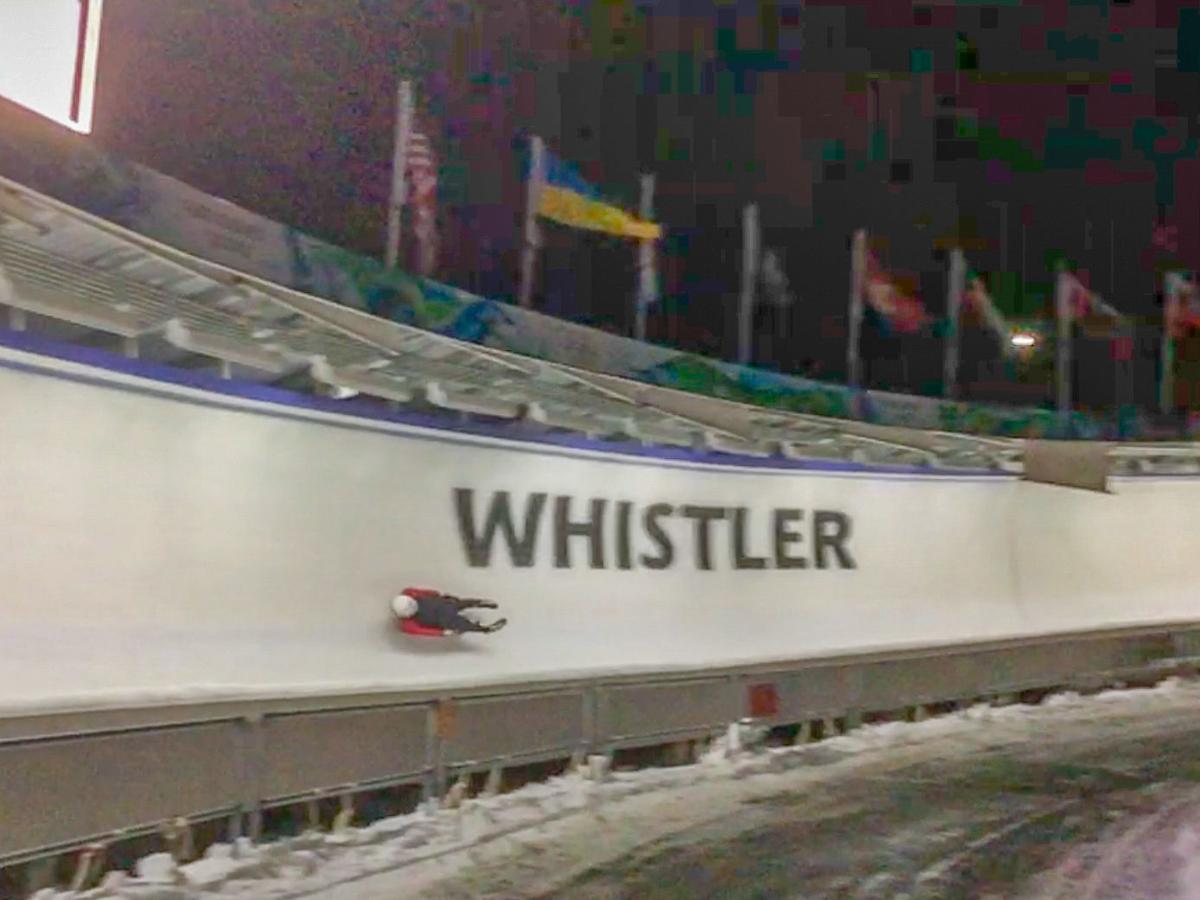 Harris competes in Whistler, home of 2010 Winter Olympics, racing at speeds between 83-86mph.

Hunter Harris gives a thumbs up after crossing the finish line at the World Cup in Koenigsee, Germany, last month.

Hunter Harris stands with his sled during a competition this year.

Harris competes in Whistler, home of 2010 Winter Olympics, racing at speeds between 83-86mph.

EAST FAIRFIELD — Hunter Harris has been honing his luge skills since 2013, and on January 14th, he’ll take the track in the Youth Olympics in St. Moritz, Switzerland.

Harris has never raced the track he’ll be competing on, but he’s doing all he can to prepare.

“I’ve watched film of other races, and I’ll have a week or two to train there and get it under my belt,” said Harris.

This will be the first time Harris competes in the Youth Olympics (ages 14-17), and his family is coming to watch him race.

“You can only do it once in your life,” said Harris. “I’m not nervous, but I am excited and ready to go do it. This was the turning point year for me.”

“We had internal qualifications within team USA at Lake Placid,” said Harris. “The standings gave everyone points, and the top two went to the world cup. Through the world cup circuit, I qualified for the Youth Olympics.”

In Germany, this season, Harris finished 17th out of 46 in the World Cup.

“That race stands out since it was my best world cup finish,” said Harris.

Harris, a senior at BFA St. Albans, began his journey with luge as a seventh-grader when he attended the Slider Search in Burlington.

“Honestly, there was nothing that led me into the sport,” said Harris. “It was out of the blue, and I had to learn it from the start.”

The weekend camp allows kids to test out sleds with wheels and race down a street.

“My parents have a friend who told us about it,” said Harris. “We thought it would be a fun weekend thing, but it turned out to be much more.”

In 2015, Harris tried the slider search again and made the team. He was named to the development team that year.

Harris spent a year with the development team and another three years on the junior candidate team, a pool of athletes looking to move up to the Junior National Team.

While he’s training and competing, Harris does his schoolwork independently. Before and after season, he attends BFA St. Albans.

“It’s different than conventional schooling, but the biggest transition comes from going to school to going on your own,” said Harris. “I’ve been doing it for three years now, and I’m getting used to it.”

“I get a lot of support from school when I get back. A lot of people may not really understand the sport, but they know why I’m disappearing for a few months.”

As the season progressed this year, Harris traveled to a new place to train for a week and race on the weekend.

At the end of the regular race season, he attended Junior Nationals, where all the young American athletes raced against each other.

Harris has traveled to Canada to Whistler and Vancouver. He’s also traveled to Europe to Latvia, Germany, and Austria. And he’s looking forward to going to Switzerland.

Whistler in Canda has been his favorite track so far.

“It’s in the mountains, and there are really good view,” said Harris. “I love the track there. It’s one of the fastest in the world, and it flows well.”

The flow of the track means a lot to luge athletes.

“It’s all about the feel of the track. Some are technical, and you have to drive a lot,” said Harris. “There are others that you can just relax and build up speed. Whistler is one of the flowy, laidback tracks.”

“There’s no feeling like the adrenaline rush when you’re taking a run,” said Harris.

Harris began his days as an athlete in team sports, but he’s learned to embrace the team aspect in luge.

“It’s an individual sport, so you’re always trying to do your best, but there’s a big team dynamic,” said Harris. “Everyone is rooting for each other because we spend so much time together.”

“The other person who qualified for the Youth Olympics is my roommate. We push each other to compete.”

Harris shared a few thoughts about aspects of luge that some may not be familiar with.

“We start a race sitting on the sled; we have handles we rock back and forth, and then we explode out,” said Harris. “Our gloves have spikes that we use to paddle forward.”

“When you gain speed, you lie on the sled and try to maintain a good aerodynamic position. You then steer and drive to negotiate the track. You’re looking for the right lines.”

“There were a lot of spectacular crashes when I started out!” said Harris with a chuckle. “There’s a learning curve to it. There are times I flipped off of one curve and rode the ice down until I stopped.”

When Harris talks of sliding until he stopped, he’s not talking about riding out a wreck on a hardware store sled.

The luge sleds travel at about 70mph at the junior level.

“In Whistler, I was traveling at upwards of 80 miles an hour,” Harris explained.

“Usually, you can get down pretty clean, but you can play with how much control you have with the sled setup. It’s not as much about getting down cleanly, but rather getting that balance to get down fast.”

“We change sled setup before every race to adjust to conditions,” said Harris. “Athletes can tell the coach what they are feeling, and the coaches do some of the changing, but we do a fair amount of it.”

“It takes some time to learn how to make adjustments. The coaches teach us different things about the sled and how it’s built.”

“My coach right now, Bethany Bedford, has helped me get to where I am,” said Harris, “and so has the Junior National coach, Robert Fegg, who I’ve been traveling with.”

“It’s cool to get coaching from a higher level,” said Harris. “Every coach has been pretty great, and they’ve been doing it their whole lives and have a lot of knowledge to pass on.”

Harris will finish out his time within the youth circuit this season, and then move on to the Junior Circuit (18-20.)

“I’ll be trying to get to the Junior National Team,” said Harris. “After that, it’s the senior world cups and the real Olympics.”

“Each level steps up in intensity. There’s a different level of competition, start heights on the track change, and the speeds get faster.”

Right now, Harris and his family fund most of his training and travel, something that could change as he gets older.

“As you move up, the teams take care of more of the expense,” said Harris. “That comes with good results and moving up the ranks.”

“My parents have been there for me through all of it. It’s definitely helped a lot having people behind me.”

A culmination of training and hard work have brought Harris to the Youth Olympics this winter, and he’s eager to test his skill.

“This is the first year that I’ve traveled the full world cup circuit,” said Harris. “It’s been a big difference from previous years.”

“I put in a lot of work over the summer with physical training, and I was feeling more comfortable than ever on the sled. It’s a combination of things--but I guess it was just my turn.”