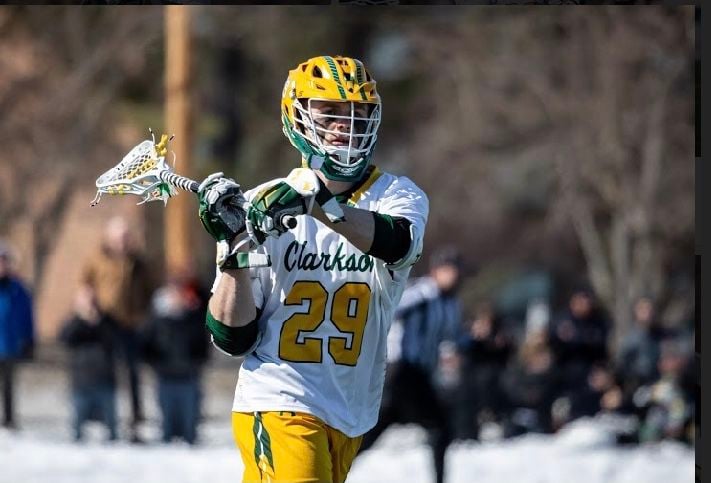 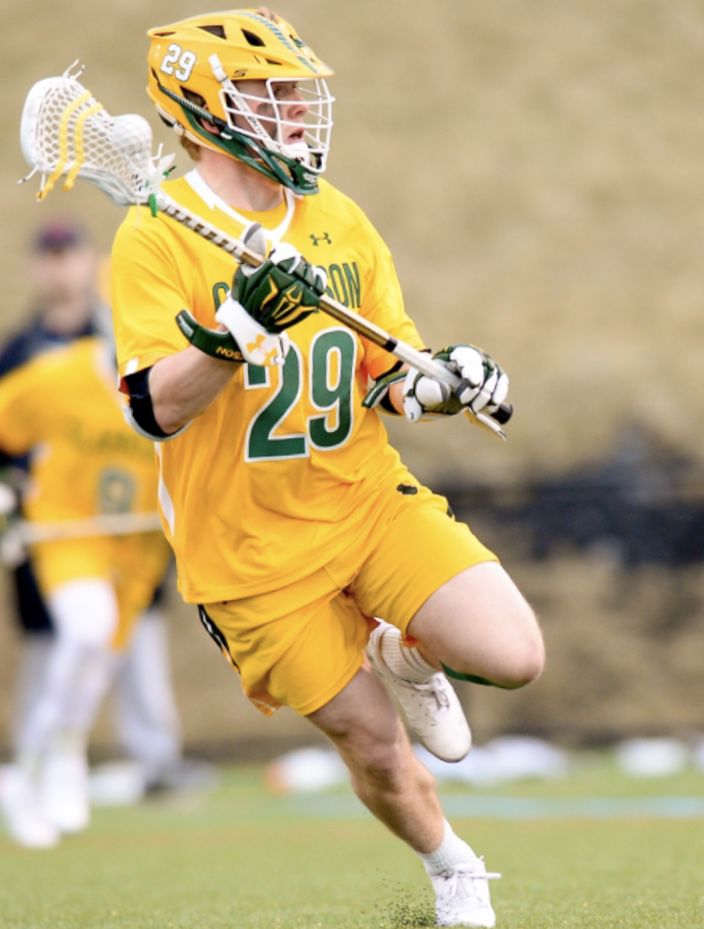 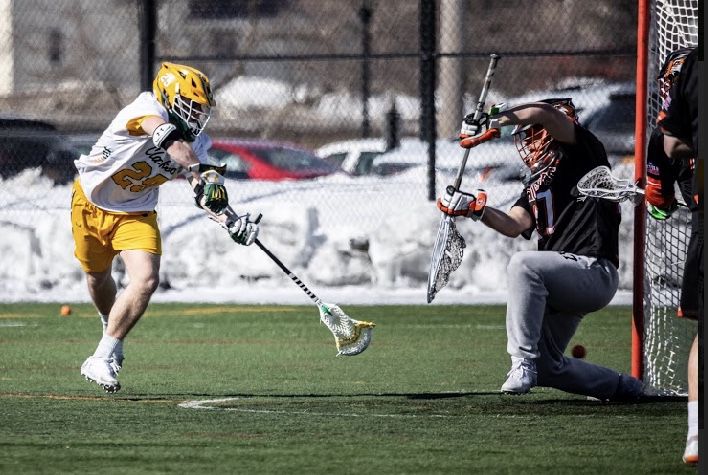 ST. ALBANS/POTSDAM, NY — College athletes across the United States faced an untimely end to their spring season; Tanner Cioffi, a senior year at Clarkson University, was one of those athletes.

Cioffi was a three-sport athlete at BFA St. Albans, who played football, hockey, and lacrosse. After high school graduation, he enrolled at Clarkson University.

“I didn’t choose my college based on the sports offerings,” explained Cioffi. “I had no intention to play a sport in college because, in my senior year of high school, I had torn my ACL and meniscus in lacrosse.

“I had surgery two days after graduation and rehabbed all summer. In the fall semester, I played wall ball and tried to stay active, but I saw some of the other guys playing lacrosse and figured I could play.”

Cioffi reached out to the Clarkson men’s lacrosse coach, Bill Bergan; Bergan invited Cioffi to workout with the team. At the end of the week, Cioffi joined the team.

“Coach knew my skills were rough around the edges, but he was happy to have me. I got my knee back in shape that year and learned a lot more about the speed and the differences in the college game.

Cioffi came back to the team in his sophomore year, equipped with a much more solid understanding of the college game.

“I was used to things, and I could focus more on lacrosse,” explained Cioffi. “We had a big senior class in my freshman year, so I was able to earn a regular spot in my sophomore year.

“My eyes were opened to the fact that I could play and compete at the college level. I gained confidence on the field, which helped me in the next two years.”

Cioffi felt a tremendous amount of relief as he closed out his sophomore season.

“It was a great feeling, and there was a weight lifted off my shoulders. It was pretty devastating to have the ACL injury, but it was so good to get back on the field.”

Returning to the team as an upperclassman, Cioffi embraced another role.

“I saw myself as a leader on the team my junior year. I knew where the freshman and sophomores were coming from--what it was like not to play much. I enjoyed connecting with the younger guys.”

Cioffi recalled one game that stood out in his junior season. The sixth seed Clarkson Golden Knights had lost to RPI by ten goals in the final game of the regular season.

The teams faced each other the next week in playoffs. This time, the Golden Knights led the game, losing in the last second.

“It was eye-opening to see that we could compete with upper-tier teams,” said Cioffi.

Cioffi’s senior season began like all the others; the official spring season opened with the first game on February 26th.

Cioffi was named one of four captains in a huge senior class; they were ready to enjoy the best season of their four years together.

“Our lineup was full of seniors and juniors who were very good players who were ready to play and ready to win.”

After just four games, the season came to an abrupt end as fears of the COVID-19 virus swept the world.

“It’s a good lesson to learn that you can’t take anything for granted. We played our last game on a Wednesday, and we had no idea that our season would be canceled,” said Cioffi.

“My senior class was a great group of guys, and I’m thankful for them. They were great players and welcomed me in that freshman year.”

Reflecting on his time at Clarkson and the leadership role he was able to take, Cioffi came back to his roots.

“It’s our way of life in a small hard-working community. My family and my school were full of great role models who helped me when I needed it, but also let me struggle. People in Franklin County have a hard-working attitude.”

When Cioffi joined the team his freshman year, he had a steep hill to climb.

“A lot of my teammates were from New York, and they were very well versed in the game. I had a big learning curve to overcome.

“My coach saw what kind of player I became, and it helped open the door for him to think about recruiting from Vermont.

“Noah Vincelette and Griffin Knapp are both on our team now. I’m glad they looked into coming here and could have the same opportunity to play here.

“I played hockey and lacrosse with both of them at BFA. It was easy to take them under my wing, and if they needed anything, I was glad to help.”

One person he was glad to have them meet was Coach Bergan.

“Coach is a very intense guy, which I like. He would do anything to win for any of his players. They are like his family. For me, I didn’t know nearly as much as I thought I did about the game, and he and the staff were always willing to give me pointers and direction.

“When all the COVID stuff began, he was devastated. He felt so badly for all of his seniors because he knew it was the end of their season.”

Bergan has been with the Golden Knights for 32 years; this year’s early ending was a first.

“You’re always prepared to send the seniors off at the end of the season, but it’s always hard. I didn’t know what to expect when I had to tell the seniors the season was over,” said Bergan, candidly.

“This was a good group of seniors, and a majority of them were solid contributors.”

Bergan recalled Cioffi’s tryout for the team four years ago.

“When we got him on the field, we knew he had potential. I’ve been here for 32 years, and I’m much more apt to see something in a young man and see where he will go.

“My rosters have grown over the years; I’m not excited about cutting kids. I want to see the kids grow and flourish, and I didn’t make a mistake with Tanner.

“Tanner is a great kid. He’s a quiet young man who works his tail off. He listened, worked out, and he’s such a quality kid who leads by example. I’d take 50 Tanners in a second.”