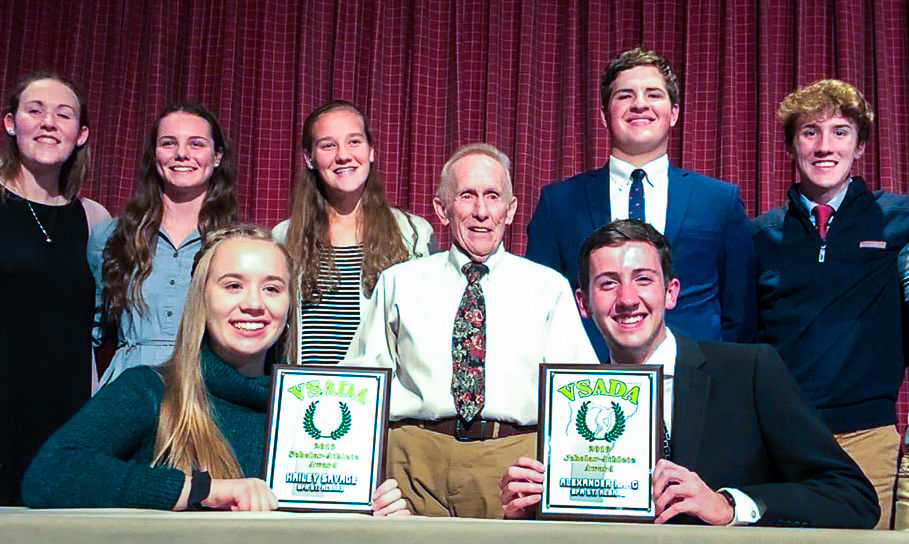 Alex Haag, far right, sits beside BFA athletic director Dan Marlow at the VSADA awards banquet. Hailey Savage, also a winner from BFA, is seated to the left of Marlow. 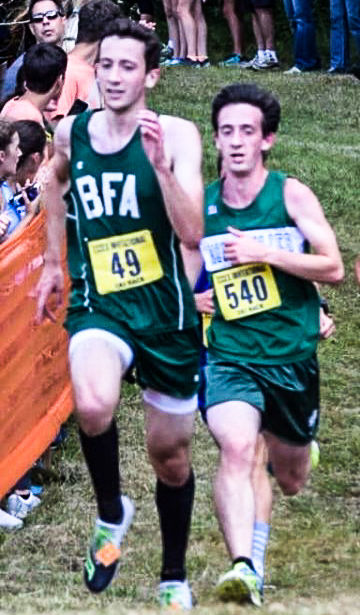 Alex Haag, to the left, races during the cross country season.

Alex Haag, far right, sits beside BFA athletic director Dan Marlow at the VSADA awards banquet. Hailey Savage, also a winner from BFA, is seated to the left of Marlow.

Alex Haag, to the left, races during the cross country season.

ST. ALBANS — Alex Haag of BFA St. Albans received the Vermont State Athletic Directors Award earlier this month, recognizing him as an outstanding student-athlete in the state of Vermont.

Ten Vermont Students receive the award, and this year two BFA St. Albans students were among the ten. Hailey Savage, featured earlier this week, was the other.

“We talk about the WOO factor,” said BFA athletic director Dan Marlow, “which talks about how you woo people with your personality and genuineness.

“Some people are bigger and stronger in athletics, but other people just stand out because of the way they act and treat people. Hailey and Alex both have that WOO factor.”

Haag, a cross country runner and track and field athlete, is a senior at BFA St. Albans.

“When he sent me his resume, I was blown away by the number of things that he does,” said Marlow.

Haag’s accomplishments weren’t the only thing that caught Marlow’s eye.

“He’s got a smile that lights up a room,” said Marlow. “He’s very unassuming, and he has a charisma and an ability to lead that is unbelievable.”

“He has a high standard, and he’s eager to face a challenge,” said Marlow. “He has garnered awards in engineering, human resource management, and public speaking.

“He’s been the president of DECA for the state of Vermont, he’s been his class president, and he’s part of the National Honor Society. He’s authored poems and won awards presenting them.”

“He’s humble, and he’s had such a positive influence on anything and everything he touches,” said Marlow, “and he has a gentle persona that is refreshing. For someone who is 18 years old, he’s been involved in so many things.”

Mike Mashtare has coached Haag in cross country and track and field at BFA.

“There’s certainly not a more deserving young man for this award,” said Mashtare. “Alex is one of the most sincere, courteous, and friendly individuals around.”

“He’s involved in everything under the sun and devotes the same amount of energy to each of his activities.”

Mashtare also complimented Haag on his commitment to running.

“Alex has a way of always being ready for the biggest races; he never lets the hype get him nervous or excited. He is always calm and collected.”

Haag was pleased to receive the award after watching the event last fall.

“I had two friends who received the award last year,” said Haag, “and I felt it was a good thing to strive for.”

Haag was required to write an essay as part of the award process.

“I liked that the essay question asked about our leadership role with our team--how our team supported us and how we supported them in return,” said Haag. “It wasn’t about your skill but about what kind of a teammate you were.”

Reflecting on his years at BFA, Haag thanked the people who have helped him navigate his high school years.

“Mr. Marlow has taught me a lot about how to lead and how to be strong and true to myself.”

“Coach Mashtare taught me how to be a runner and a teammate. You don’t have to be the fastest, but you have to put the work in.

“At the end of your four years at BFA, you’re not going to remember the times you ran, but you will remember the people you met and the time you spent together.”

“Cross country is a very unique sport,” said Haag. “You compete against everyone, but when you cross the finish line you’re high fiving your competitors. Everyone is in the same position--gasping for breath and looking for water. It’s an incredible moment at the end of the race. You feel close to everyone.”

One of his favorite races of his high school career took place in South Burlington under the lights.

“I don’t remember the times I ran or the place I got, but I remember the feeling of excitement I had,” said Haag. “That track and field meet at South Burlington was an all-day event, and the last few races were lit by football field lights.

“I ran one of my best 800-meter times that race. I knew it was getting closer to States, and I had to make my qualifying time.

“I remember the feeling of knowing I’d broken a personal best. I remember seeing my coach cheering in the stands and looking proud.”

When asked what advice he’d give to younger student-athletes, Haag answered confidently.

“If it’s important to you, stick with it. That doesn’t mean that you have to love it,” said Haag. “You need to decide if it is important to who you are and what you love and if it will help you get where you want to go.”

“If it’s not important to you, don’t do it, no matter how much you feel pressured. If it doesn’t benefit you or others, it’s not worth doing.”