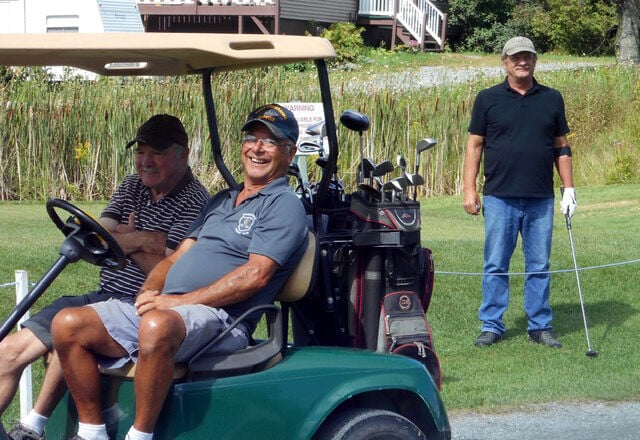 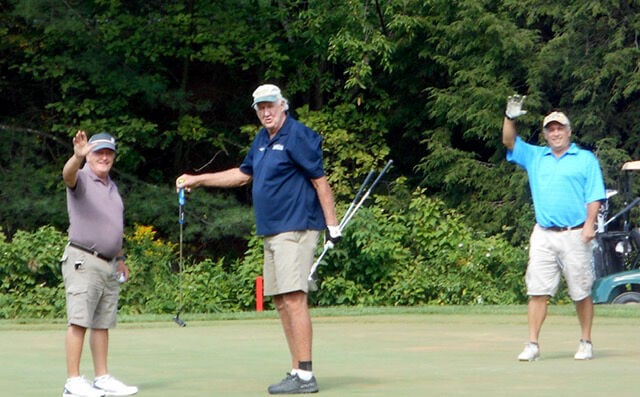 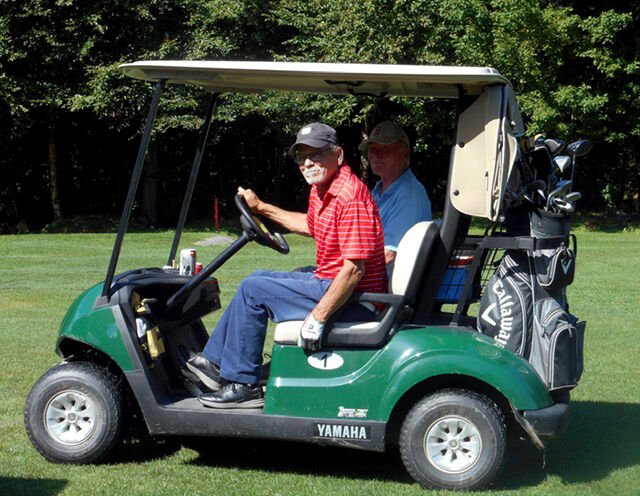 Bob “Bone” Mero and Paul “Cold One” Smith. Bone hadn’t realized that Gas Man was going to break his season record of most under points. 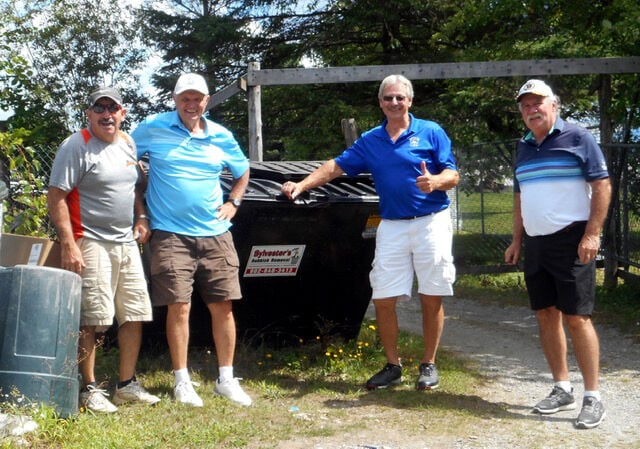 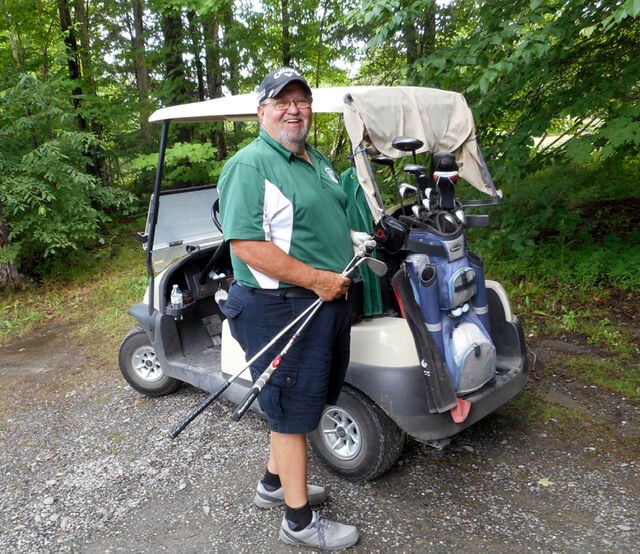 Bob “Bone” Mero and Paul “Cold One” Smith. Bone hadn’t realized that Gas Man was going to break his season record of most under points.

ENOSBURG — With the season hitting the home stretch, there were some big winners and losers this week. Nobody was hotter than Phil “Guitar Man” Lovelette. Guitar Man shot a blistering 75 and carried three guys who have been slacking in recent weeks to a first place finish.

“Slim” Tim Columb, Larry “Harley” Wilson, and Mike “Soupie” Supernault were the lucky guys to play with Guitar Man as the team was +13.5. Guitar Man was most over this week with a +8.5 performance with the other guys were just above their points.

Bob “Bone” Mero was all alone in being the guy this year who was double digits under his points. Now he has company. Jack “Gas Man” Dufresne played as a guest of Winston and he didn’t disappoint.

Thought to make 16 points, Gas Man was steady on the front and back and collected 2 1/2 points on each side to end up with 5 points total. Each side consisted of one bogey and 3 doubles, along with 5 “others.”

He emptied his bag of balls and some of Winston’s on the cart. The team was -19.5, easily winning the Dumpster Fire Award.

Jake the Ball Hound was with his grandfather, Bert “Eraser” Broe and found around 50 balls. If he would have been following behind the Dumpster winners, that could have easily been 70, but he would of had to swim for some. “Stormin’” Norman Sarthou was closest to pin at 7’6.”

In the “Ask Winston” segment last week, Roland “Butterscotch” Daudelin questioned if a drive didn’t go the length of the leather, could it be re teed? Winston replied that he never heard of a drive not going farther than the length of the leather and that was a term used on the green. Well Bone Mero proved him wrong in an outing last Sunday as Bone’s tee shot on #5 went about 5 inches. Lightning can strike twice.

We’ve had several “Holes of the Week” come from the Thursday Night League. Again it was somebody playing in Winston”s group.

Soupie teed off on #13 and hit the ball onto #7. Soup drilled a ball that hit a tree and bounced back to within a foot from where he hit it. Not deterred, Soup whiffed on the next one, took out his chunk hybrid and hit the next 3 about 25 yards. He finally hit one to the top of the hill and while looking for his ball, asked Winston, “Where did my ball go?”

Winston, ever the diplomat, replied, “It goes in your pocket as you are lying 7 and not up to the 200 yard marker yet.”

Soup finished on #11 and had to birdie the hole to get his points. When his tee shot bounced off the roof of the pump building, that dream went out the window. So Soup dropped a ball, hit it onto the bridge where it ricocheted three times to make it across.

The happy Soup turned to go back to his cart and fell over the DROP AREA sign, falling one way while his club went the other. He was reminded that the DROP AREA is for balls, not people. He saved a 5 on the hole with a 25 foot putt.