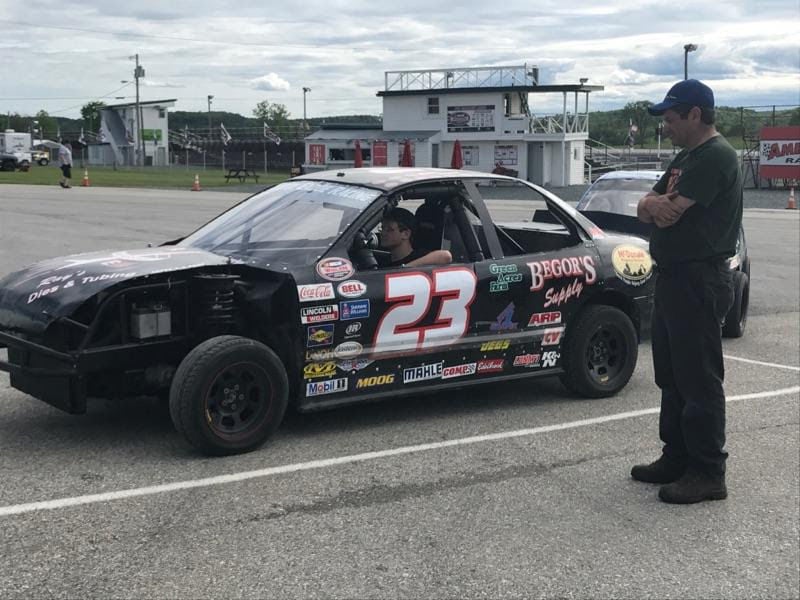 Kevin Gadue and Cam (seated in the car) beside the first Gadue race car. 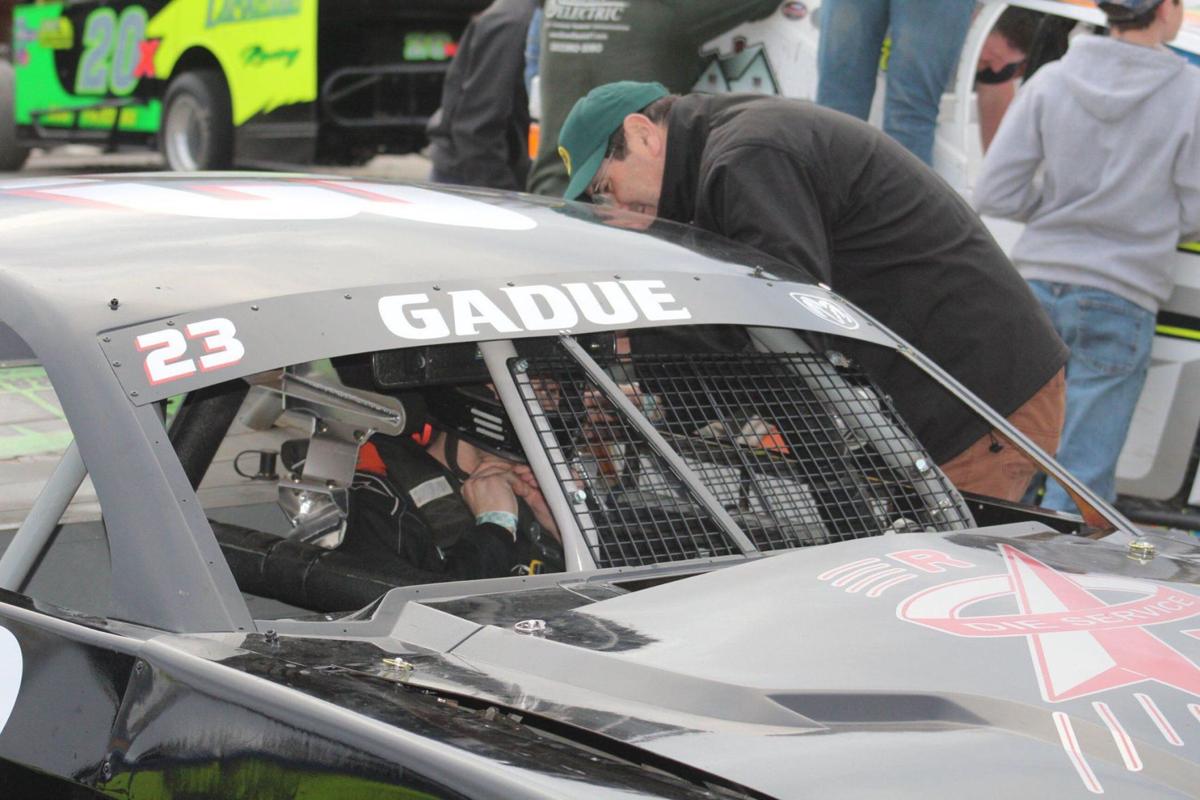 Kevin and Cam chat at the track this season. 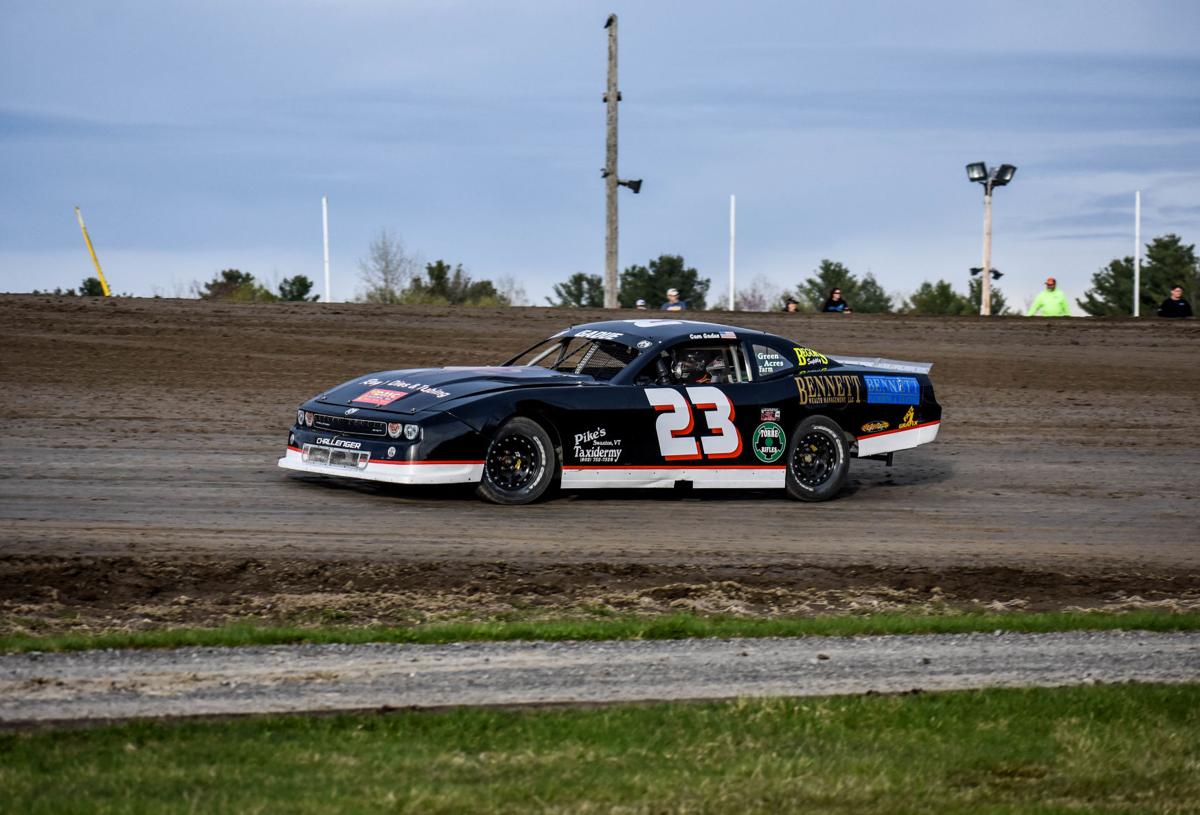 Cam Gadue races in the #23 car this summer.

Kevin Gadue and Cam (seated in the car) beside the first Gadue race car.

Kevin and Cam chat at the track this season.

Cam Gadue races in the #23 car this summer.

HIGHGATE — Cam Gadue and his father Kevin spent last summer on the track, racing at both the Devil’s Bowl and Airborne Speedway.

Cam’s love for racing began when he was a kid, and when an opportunity to take the track came along Kevin was ready to join him.

Cam spent the summer of 2016 at the track with Dylan Rabtoy, getting a firsthand look at racing.

In the spring of 2017, just before high school graduation, Cam had the chance to go in halves on a 4-cylinder car with his friend Dylan sister, Maddy.

The car was a proven championship-winning vehicle. It dominated the asphalt at Airborne in 2015 and 2016, totaling 26 wins and one championship.

Cam would race two years in that car, winning seven races out of 33.

In 2017 and 2018, Cam was the runner up in the standings at Devil’s Bowl and Airborne Speedway.

In 2019, the father-son team moved up to Super Stocks. They raced 31 times this year, competing at Airborne on Saturday nights and Devil’s Bowl on Sunday nights.

They finished fifth in the standings ad the Devil’s bowl and tenth at Airborne.

The V-8 Super Stock boasts a 602 GM crate motor and the chassis is based on an 80’s Chevrolet Monte Carlo. The Monte Carlo has special meaning to the Gadue family.

This summer, Cam inherited the car when he lost his father.

That connection with cars has continued to flow even after Kevin’s passing in mid-August.

One Friday night, shortly after he lost his father, Cam took the Monte Carlo out for a ride.

The race season had been long and hard in many ways--a new class, little success on the track, and the blow of his father’s death.

“I parked the Monte in the garage and said a prayer,” said Cam, candidly. “I asked the Lord for a sign about my dad’s place in Heaven. In the back of my mind, I hoped the sign would be a race win, but it didn’t really matter to me what the sign was as long it was communicated to me in some way.”

The next night, the race at Airborne was rained out. On Sunday, Cam headed to the Devil’s Bowl and secured a second-place finish.

“That was my sign, and it helped a lot,” said Cam.

Taking on the race season alone, even if it was the tail end of the year, was tough.

“Dad and I worked together at work, but racing was the biggest part of our lives outside of work along with deer hunting,” said Cam. “My dad sacrificed a lot to help me.”

“We weren’t mechanics,” said Cam. “When it was Dad and me, we didn’t know what we were doing, but we got through it and we did okay.”

Thankfully, the two had plenty of help from knowledgeable friends, including Dylan and Dave Rabtoy.

“We wouldn’t be where we are without them,” said Cam, “FitzGerald Motorsports in West Rutland was also a big help to us at Devil’s Bowl this year, along with Wright Racing and Begor Racing at Airborne.”

Looking back over the years they spent racing, Cam spoke thoughtfully about things that come to his mind now.

“Whenever I was exiting the track, my Dad was always one of the first people I’d see,” said Cam. “If I did well in the race he was giving me a thumbs up on my way back in.”

Cam recalled the joy of sharing his first podium finish in the 4-cylinder class with his dad. The team made it to victory lane with a third-place finish on July 8, 2017.

“I’d been racing for two months, and we weren’t expecting to finish that high!” said Cam. “I won my first race two weeks after that, the day after I turned 18.”

Cam and Kevin both valued the help they received from other racers, and now that he’s on his own, Cam values it even more.

This year, during the last race at Devil’s Bowl, Cam got into a wreck and was taken off the track on the wrecker.

“The hood and fender were buckled and it wouldn’t fire. I was ready to get out of the car and call it a night,” said Cam.

A crowd of about people surrounded Cam and the car, took off the hood, pounded out the dents, and sent him back to the track.

“My Dad thought so much of the people that would help us. The week before he passed, a group of people helped us with the car after an on-track incident,” said Cam. “I had a flat tire and I believe part of a quarter panel was dragging on the ground.”

“I was upset after the race because I didn’t do well. I remember Dad telling me to go and thank the people who helped us. He thought the world of that--of people being willing to help others.”