You are the owner of this article.
Edit Article Add New Article
You have permission to edit this article.
Edit
Subscribe | Sign In
Home
News
Elections 2020
Sports
Classifieds
Obituaries
Editorial
Business Directory
Things to Do
About Us
e-Edition
2020 Meet Your Business Community
2020 Resource Directory
2020 Discover Guide
NEWSLETTERS
1 of 16 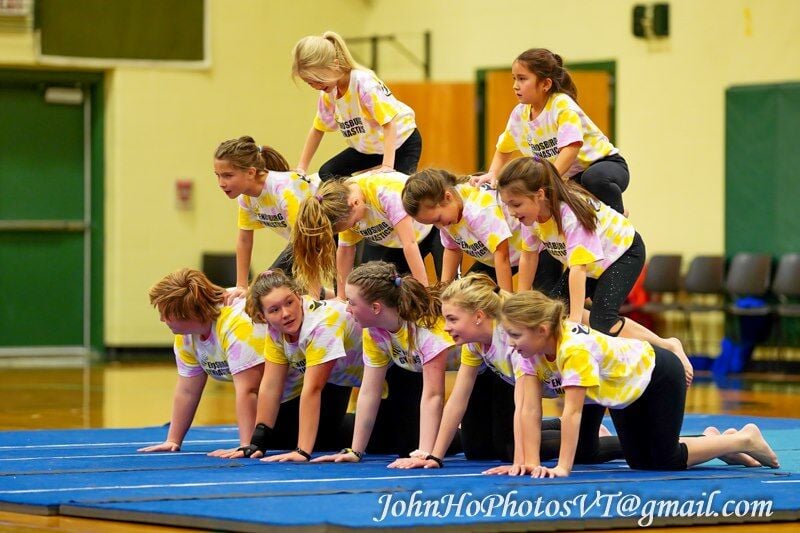 The High Flyers perform during a girls’ varsity game in Enosburg during the 2019-2020 season. 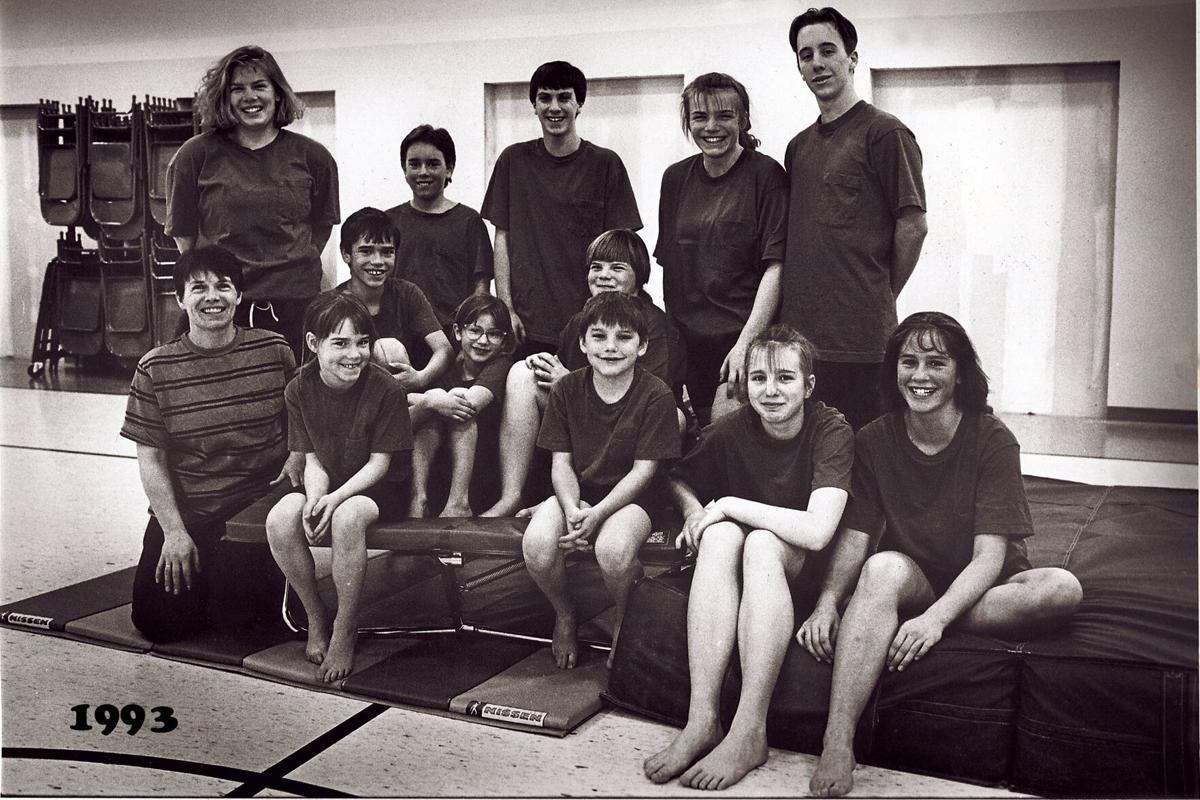 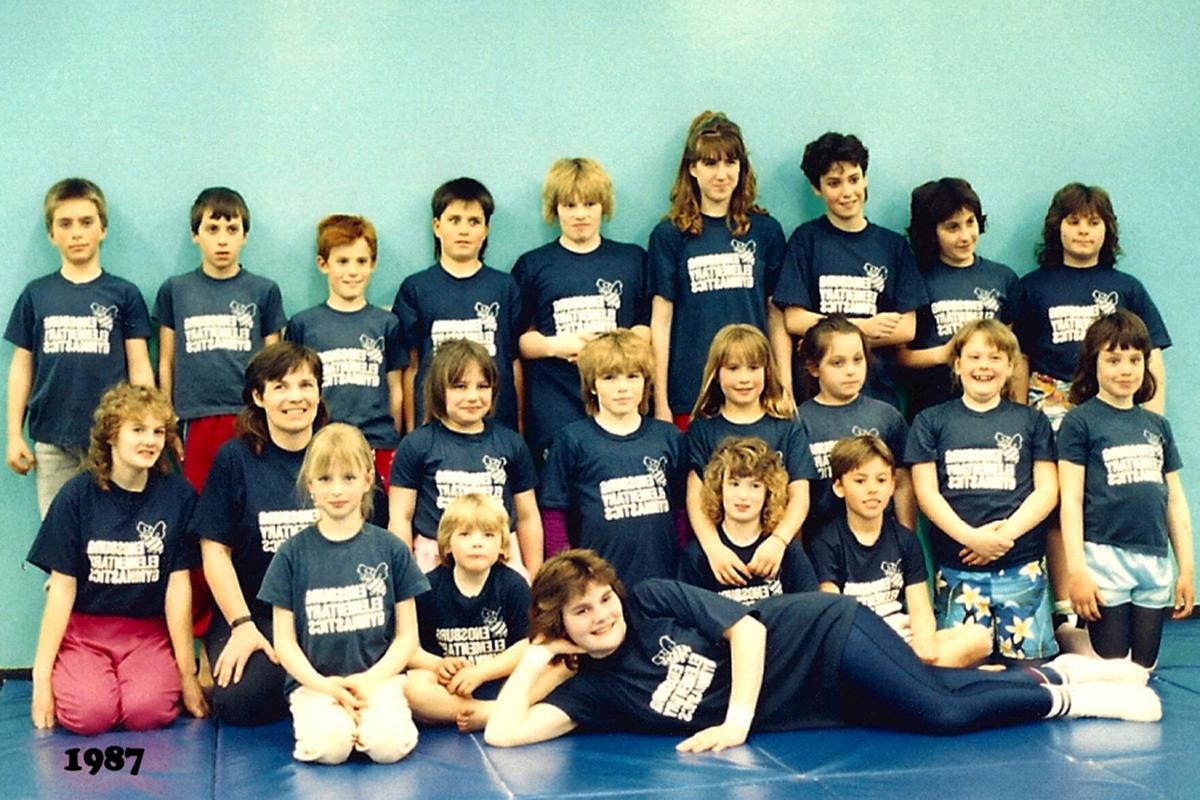 The 1987 High Flyers show team, including Luc Gates. The Luc Gates Foundation donated money toward the purchase of a mini trampoline for the High Flyers in 2015. 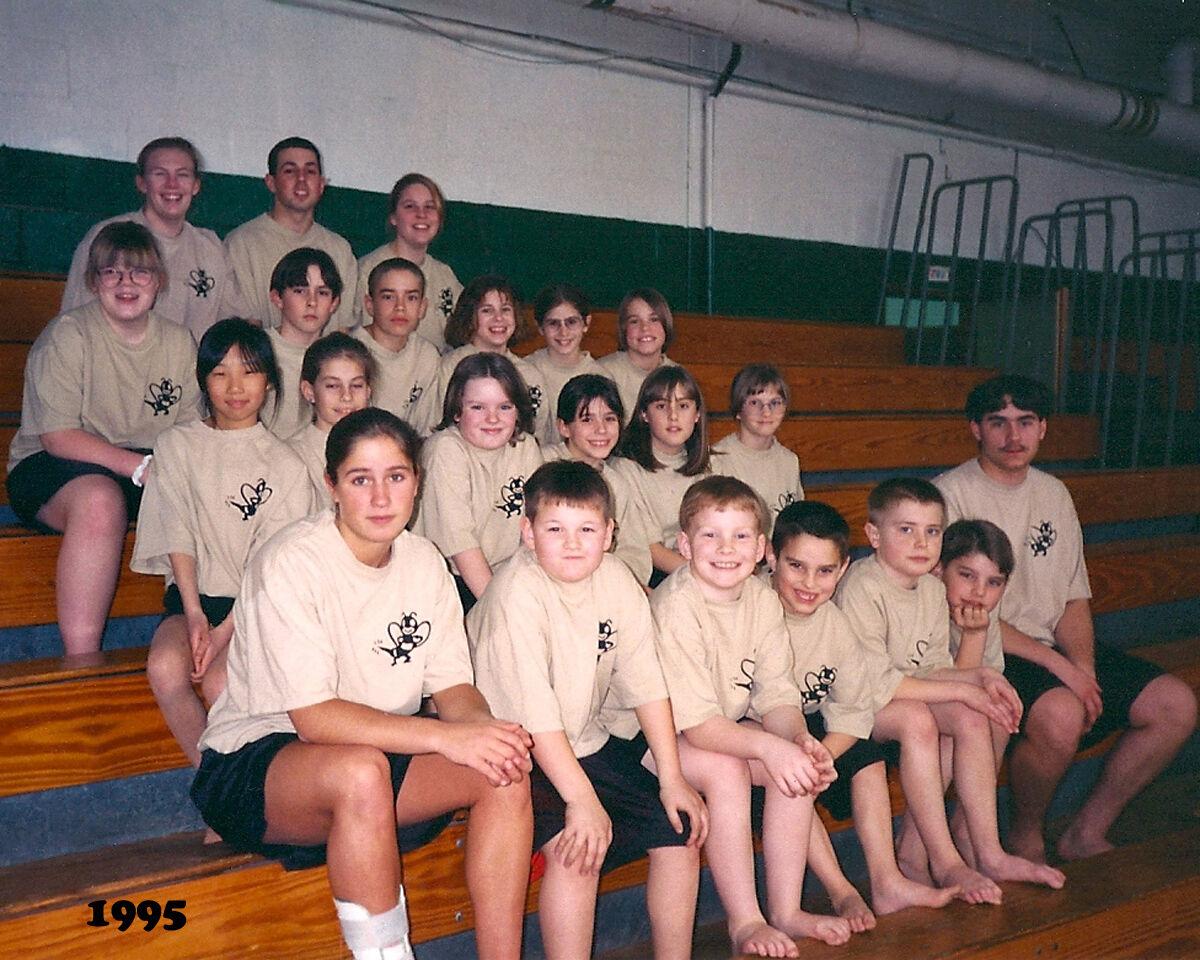 The 1995 High Flyers in the Enosburg gymnasium. 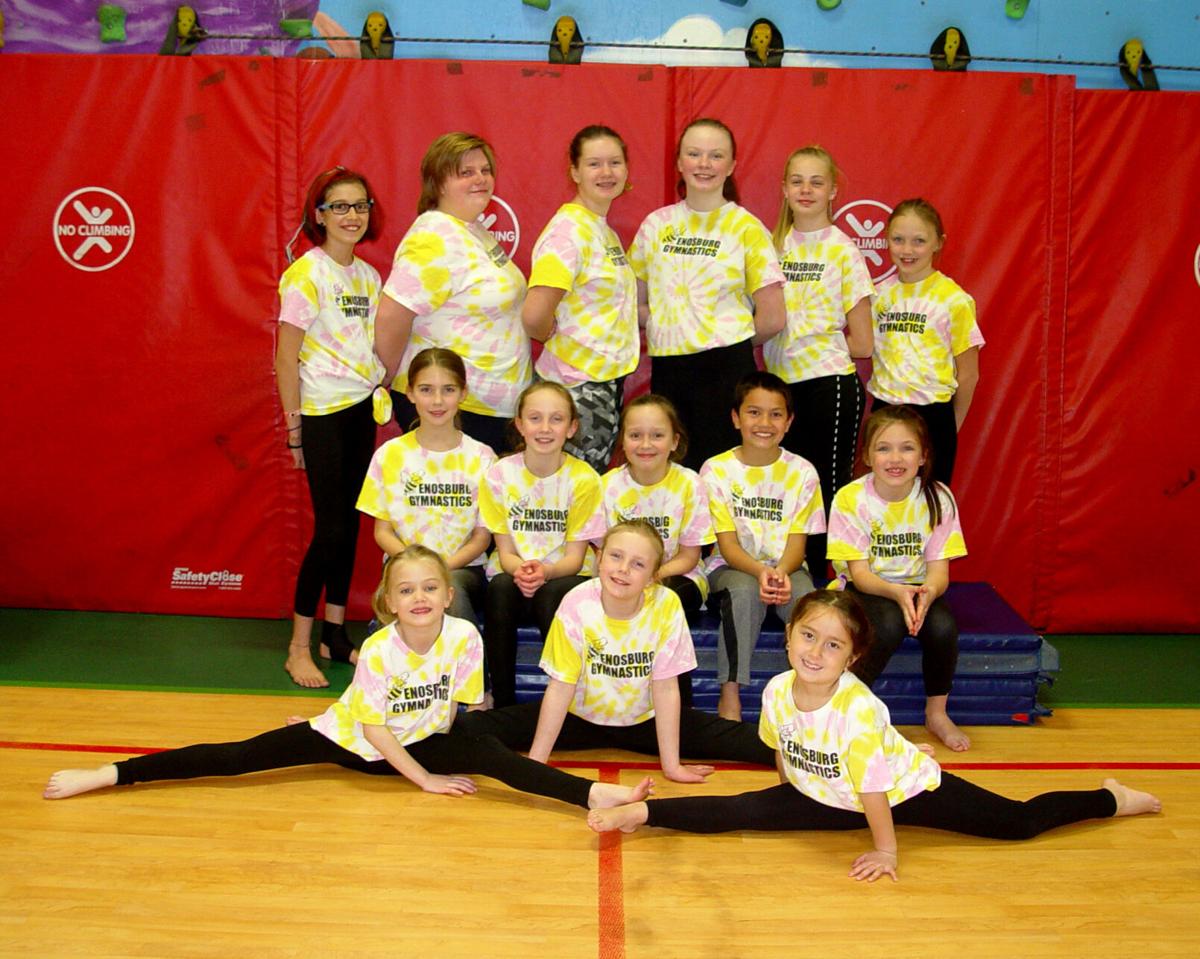 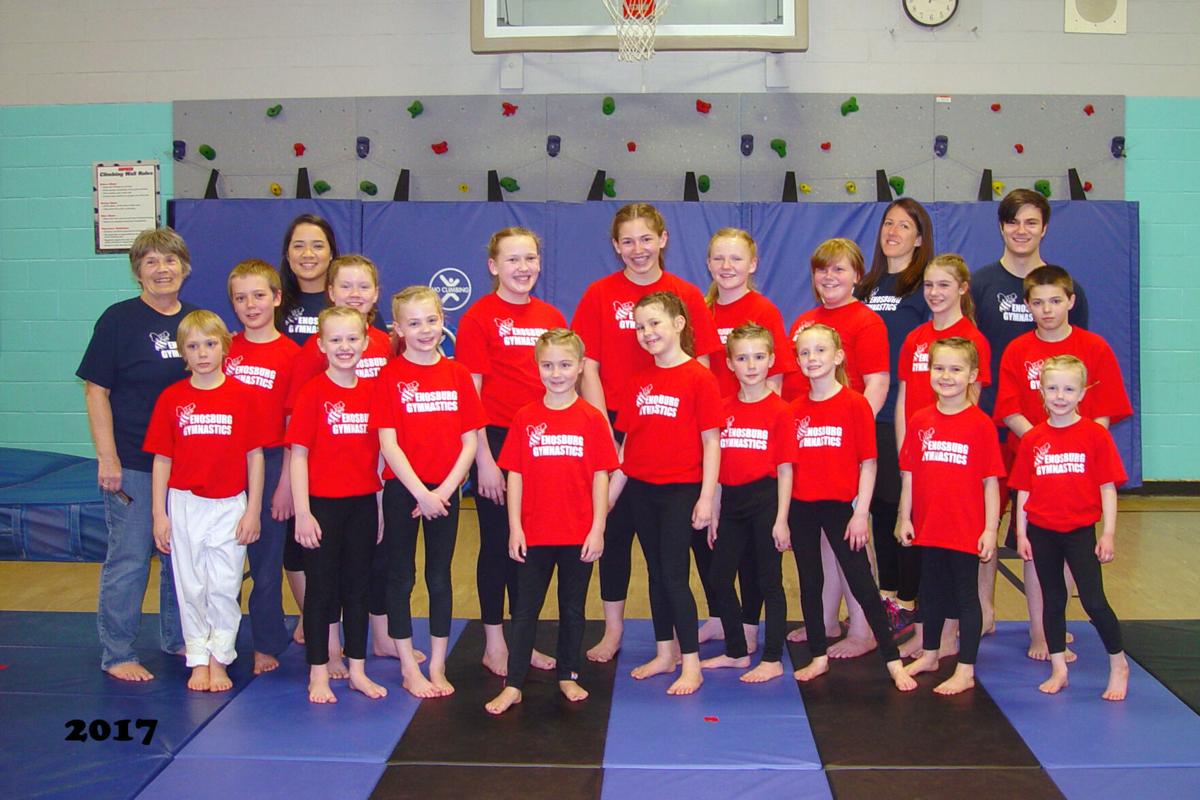 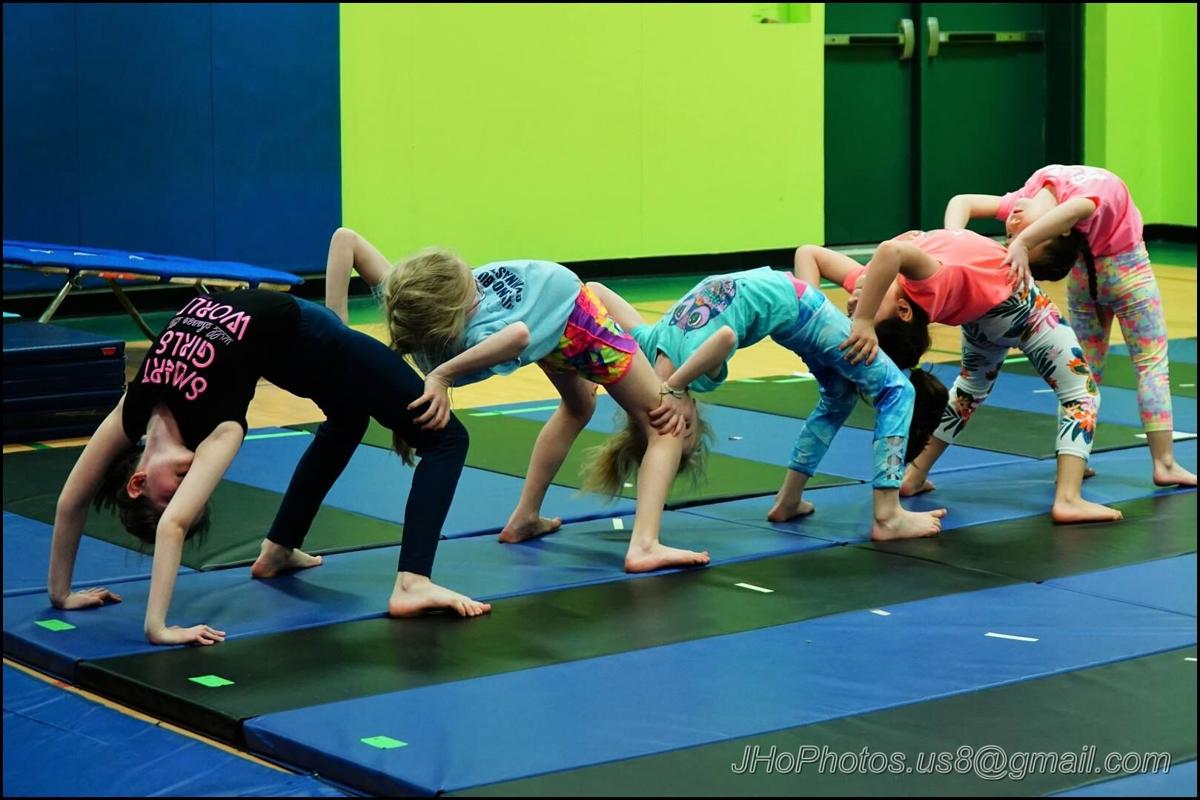 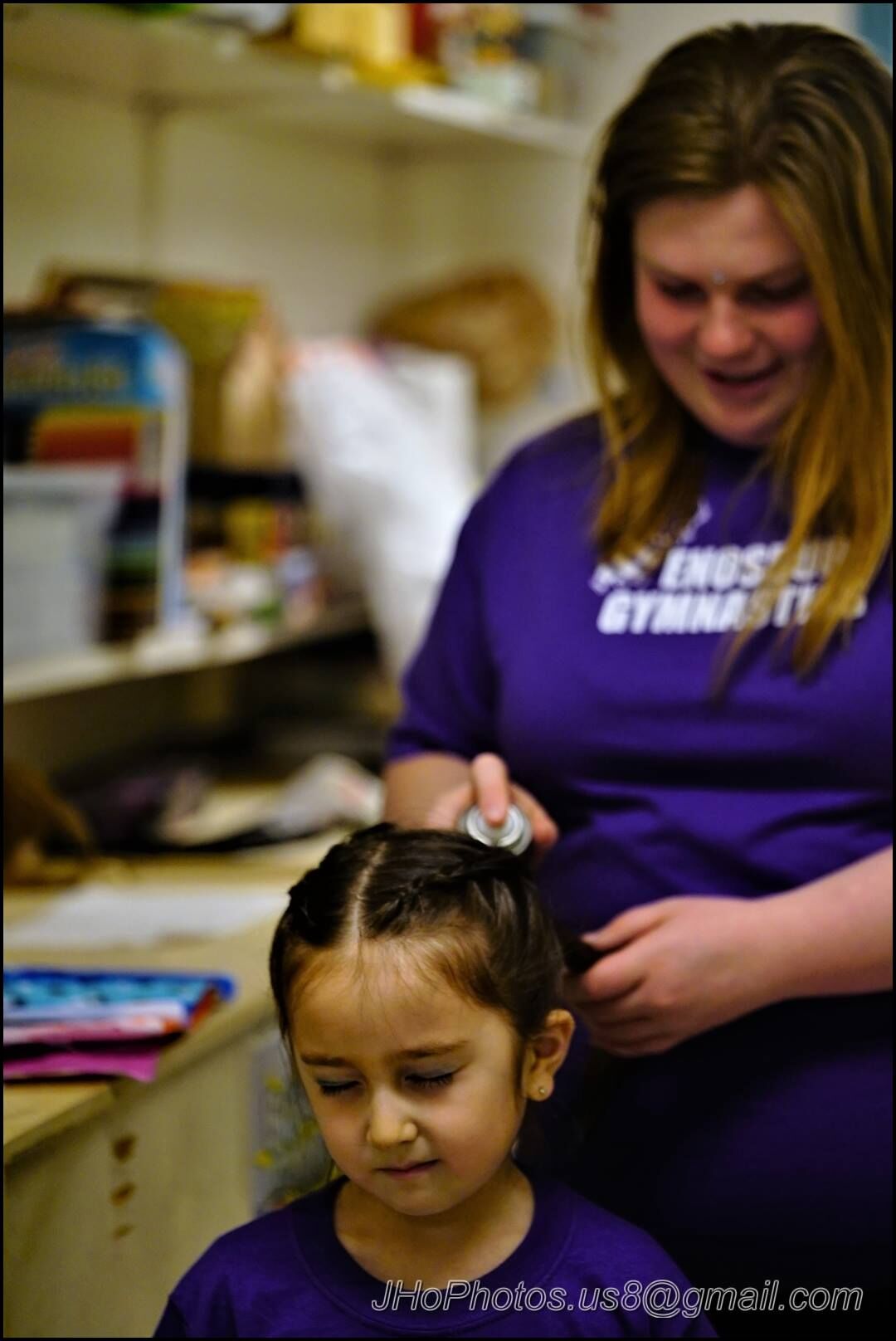 Hannah Ho gets her hair done before a performance in 2018-19. 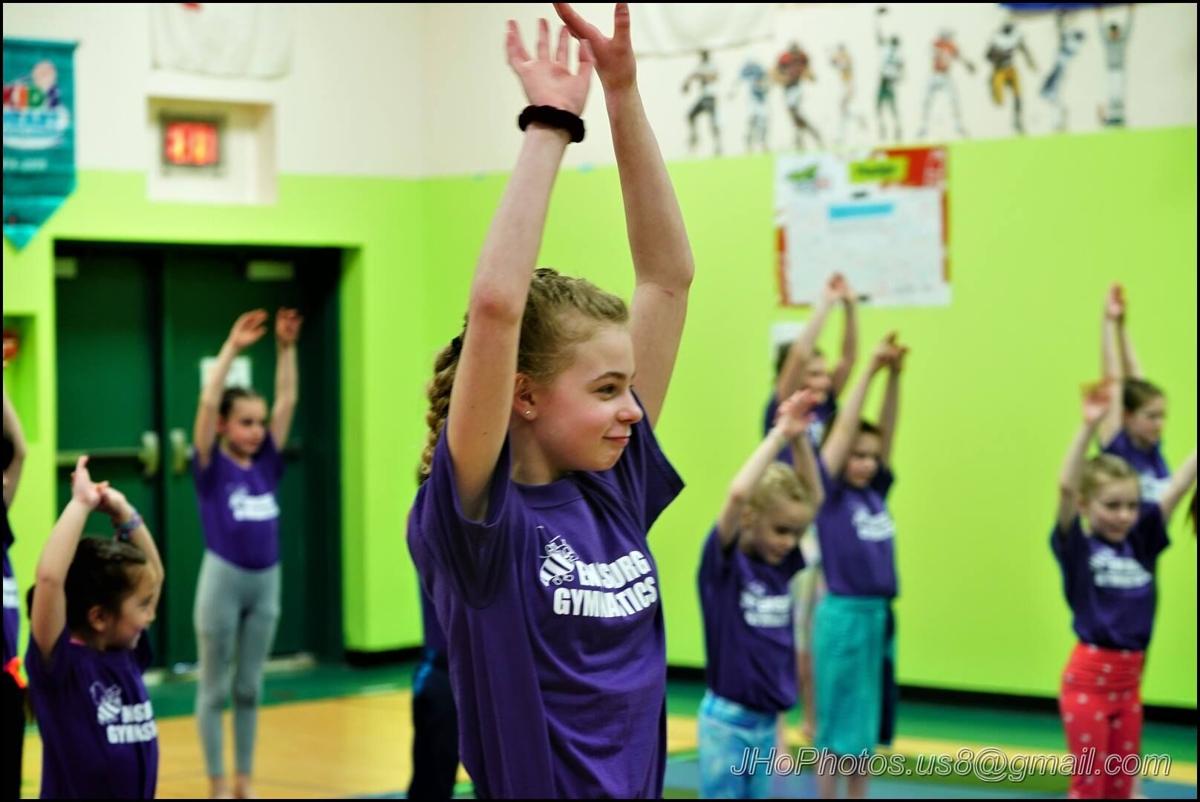 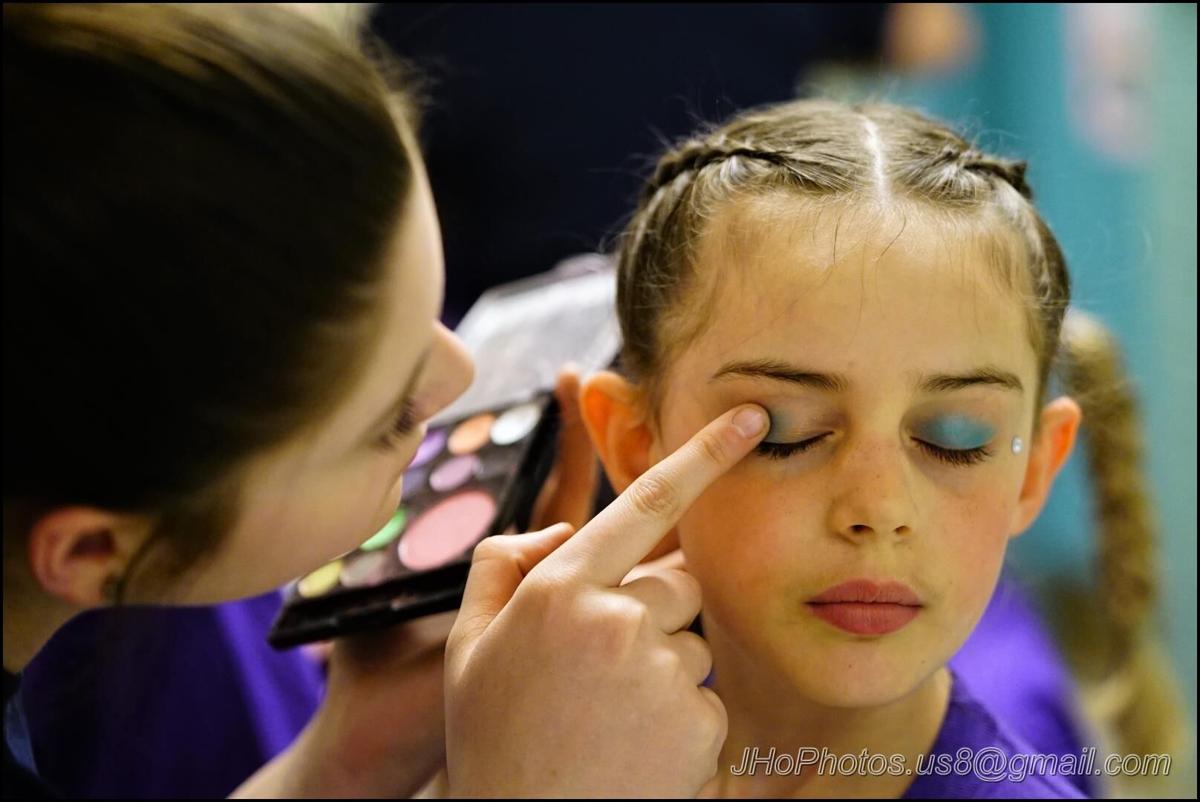 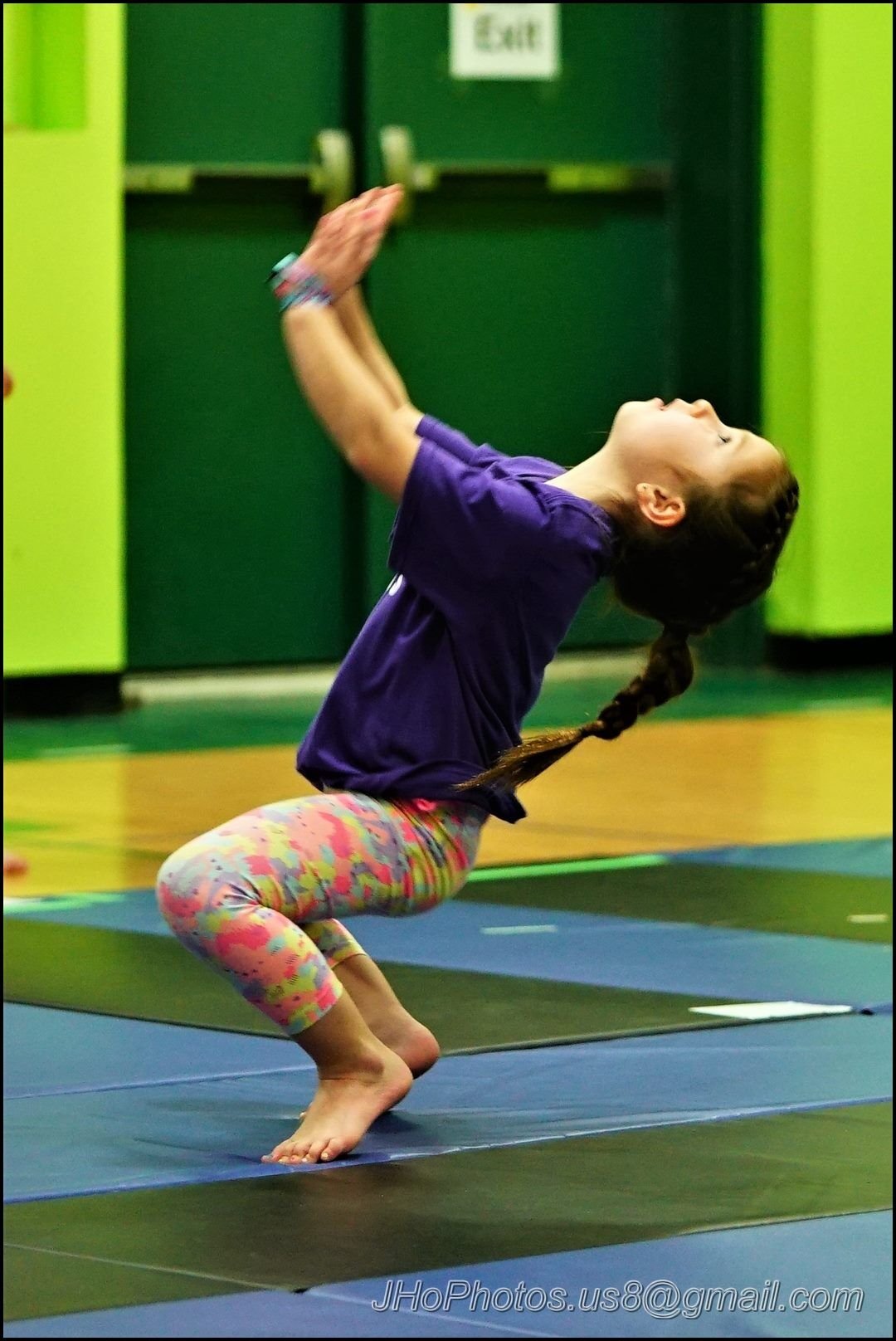 Hannah Ho prepares for a trick. 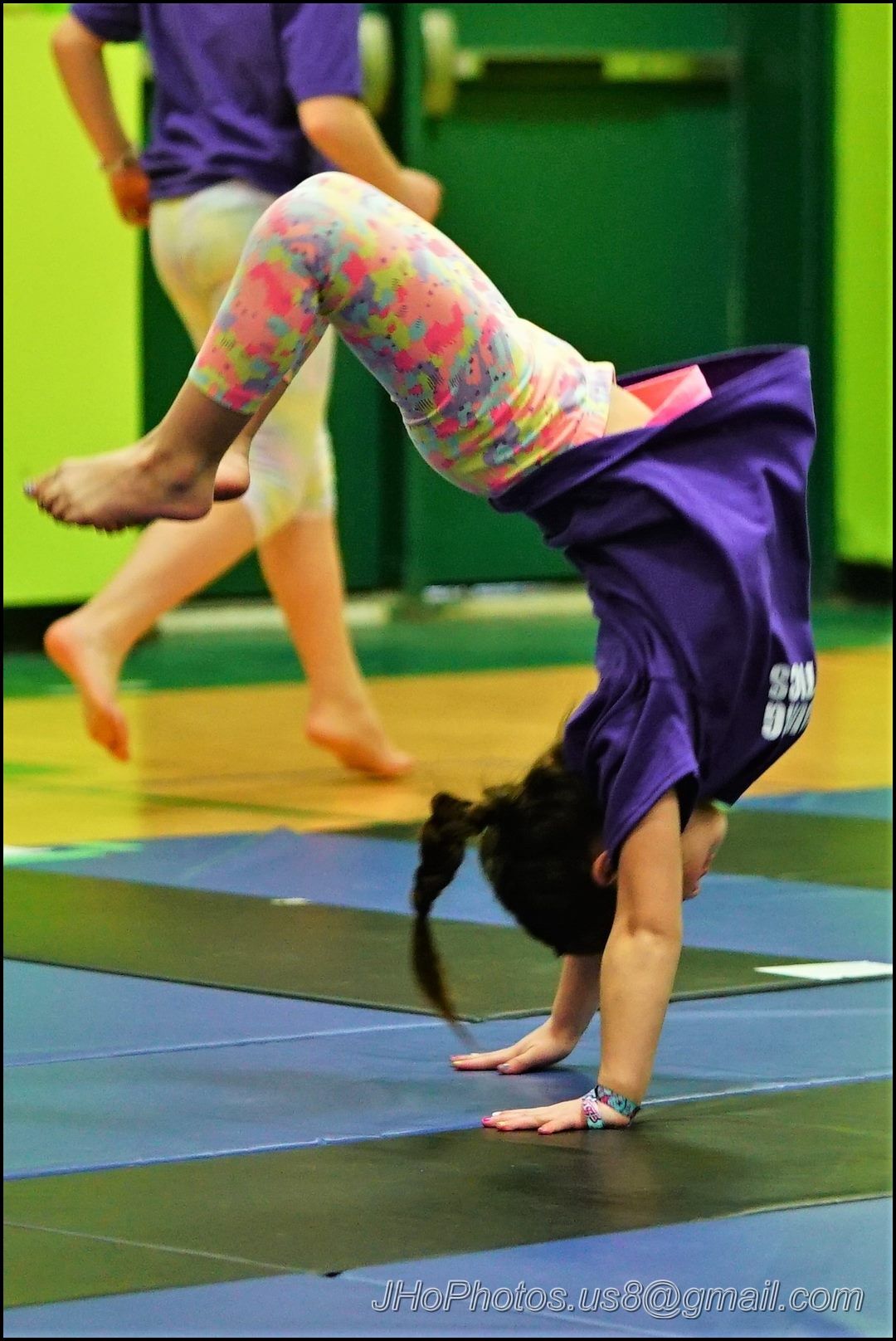 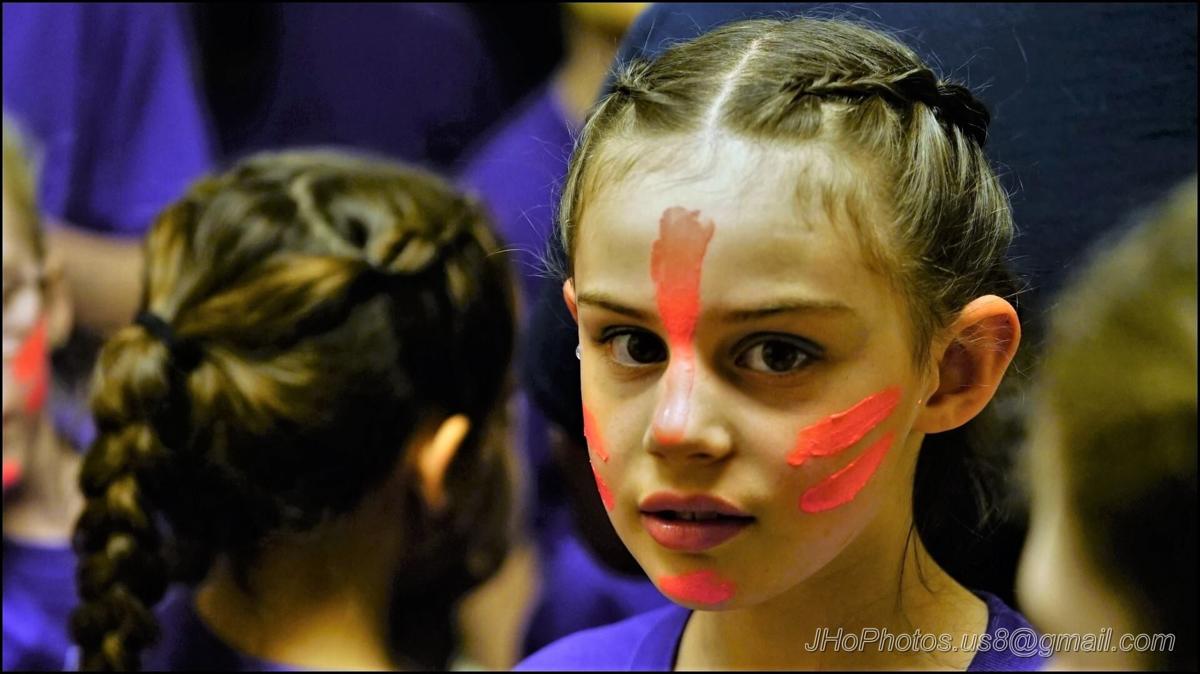 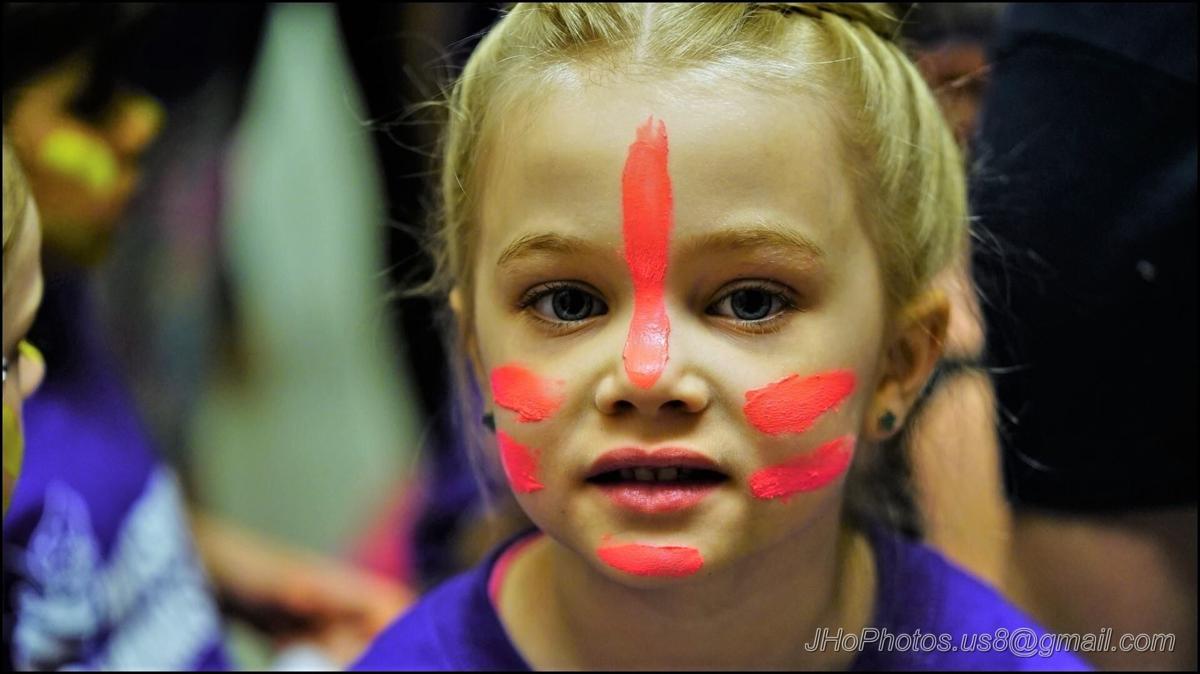 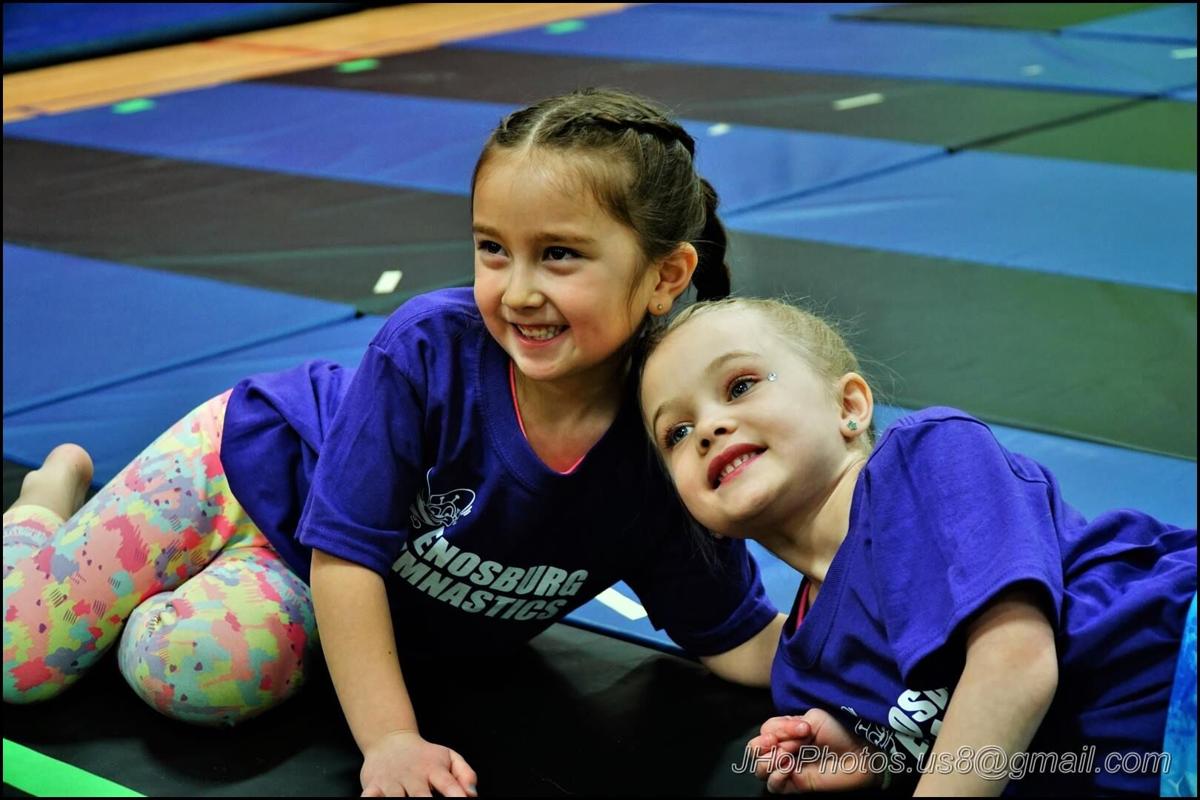 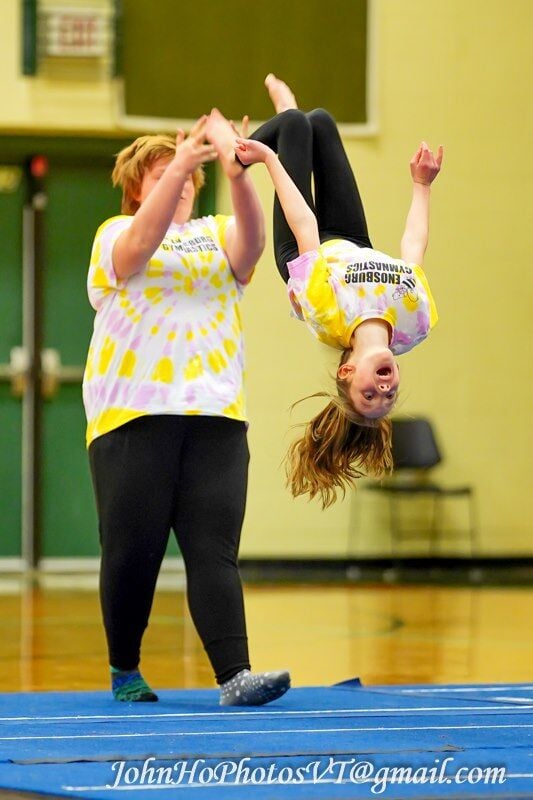 The High Flyers perform during a girls’ varsity game in Enosburg during the 2019-2020 season.

Hannah Ho gets her hair done before a performance in 2018-19.

There’s usually something scheduled to entertain the crowd at halftime. Last year, the High Flyers gymnasts kept the crowd on the edge of their seats.

Ann Hull, who began coaching gymnastics at the Enosburg Elementary School in the ‘80s, is the High Flyers’ catalyst.

Shortly after Hull began substitute teaching at the Enosburg schools, the high school donated their old mats to the elementary school.

Gymnastics mix things up in the classroom.

“I taught one first-grade class gymnastics in the classroom. We’d move the desks out of the way and spread out the mats for the kids to practice,” said Hull.

Gymnastics became so popular that Hull began teaching classes in the evenings. Soon, she had up to thirty kids participating each night. Parents would help spot at stations; it was a strenuous job.

In the ‘90s, Hull became the PE teacher at Enosburg Elementary School. She continued to teach gymnastics on weekends and put on a yearly show.

Kids ages K-12 learned floor routines and practiced on parallel bars, the pommel horse, and the balance beams, all hand-me-downs from the high school.

“Some kids got really good, and I decided to do a breakout group that would perform shows,” said Hull.

“The high school kids were great! They’d help the younger kids, and they did so much for the program,” said Hull. “Our younger audiences wanted my older gymnasts’ autographs because they performed like stars.”

Would Hull’s retirement mean the end of the High Flyers?

Hull retired from teaching in 2011 and returned to substitute at the school. She saw that some of the gymnastics equipment that she bought in the 80’s was still there.

When she asked about the equipment, Julie Snider, the PE teacher and a former student of Hull’s suggested that she begin a gymnastics program. Hull agreed and was soon coaching six nights a week.

The new group of kids loved the opportunity to learn and to perform. They even did a routine that included a show performed in the dark with lighted wands.

Once again, as the children improved, the group was divided. More advanced gymnasts, those who could do walkovers and back handsprings, became the present day High Flyers.

In 2019, when the group was ready to perform, Hull approached Enosburg Athletic Director Chris Brigham to ask if the High Flyers could perform during the basketball halftime break.

“We did the first game, and the kids loved it! We had planned on six JV games, but Chris loved the performance and asked if we could do varsity games, too,” said Hull.

“The biggest supporters in the crowd were the boys from the varsity basketball team. They’d sit in the front row and cheer for the kids! The more they cheered, the better the gymnasts performed,” said Hull.

Performing for both JV and varsity games meant the kids had a late night and a long wait between routines.

“I asked the parents if they didn’t mind waiting between games, and they were happy to do it,” said Hull.

When it came to practice time, the High Flyers spent about an hour and a half a week on Fridays to prepare their routine.

Hull, who’s been coaching kids since 1973, always has the kids’ best interest on her mind. She surrounded herself with people who could help her like Tyler Wilkins, Leanne Grupp, Marie Ortiz, Kerri Ross, Trisha Gosselin, Bridgette Adams, Karen Powers, and Kassandra Larson.

“I enjoy listening to people cheer for the kids. People from out of town would tell us the High Flyers’ routine was the best halftime show they’d seen,” said Hull.

“The kids worked a lot harder in practices when they knew they’d be performing at the high school. When things get back to normal, I’d love to see this start again.”

Two of Hull’s students, Hannah and Liam Ho, came from Franklin to participate with the High Flyers.

“Hannah Ho was the crowd favorite. No one could believe a little girl like her could do what she did, but she practices all the time,” said Hull.

“Every time Liam did a back handspring, he got better, all the kids worked really hard, and it was awesome to see.”

Hannah, who is in the second grade, joined Hull’s classes in Enosburg two years ago. Hannah likes to be upside down, and the round-off backflip is her favorite trick.

Liam watched Hannah and decided he’d like to do gymnastics, too. He loves doing back handsprings.

“They’d brush their teeth upside down in the hallway!” said Stephanie Ho, Liam and Hannah’s mom.

“The first time we performed, I was nervous, but after I did it, it wasn’t that bad. It was really fun to have everyone cheer for us!” said Hannah.

Hannah and Liam practice on mats at home, especially now that COVID-19 has canceled gymnastics classes.

The hardest thing to learn? For Hannah, the ‘aerial’ cartwheel. For Liam, the back handspring.

“I am so impressed with the core strength they’ve gained through gymnastics. That will help them in everything else they do,” said Stephanie.

“It’s fun to see them try new things and believe in themselves. I was so impressed with what Ann could get the kids to do and how she could help them. The way she handles the children is remarkable.”