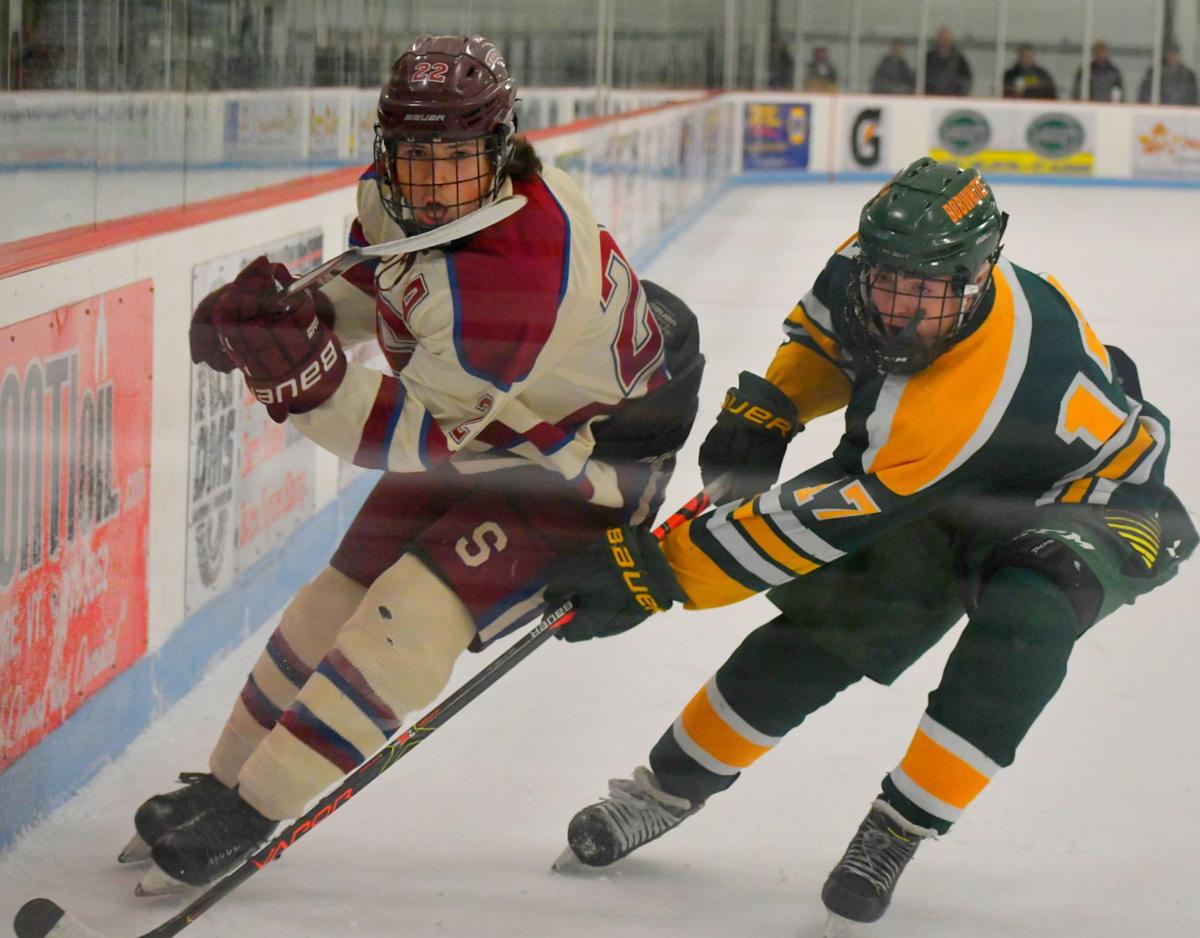 Derek Nadeau battles for the puck in BFA’s game against Spaulding. 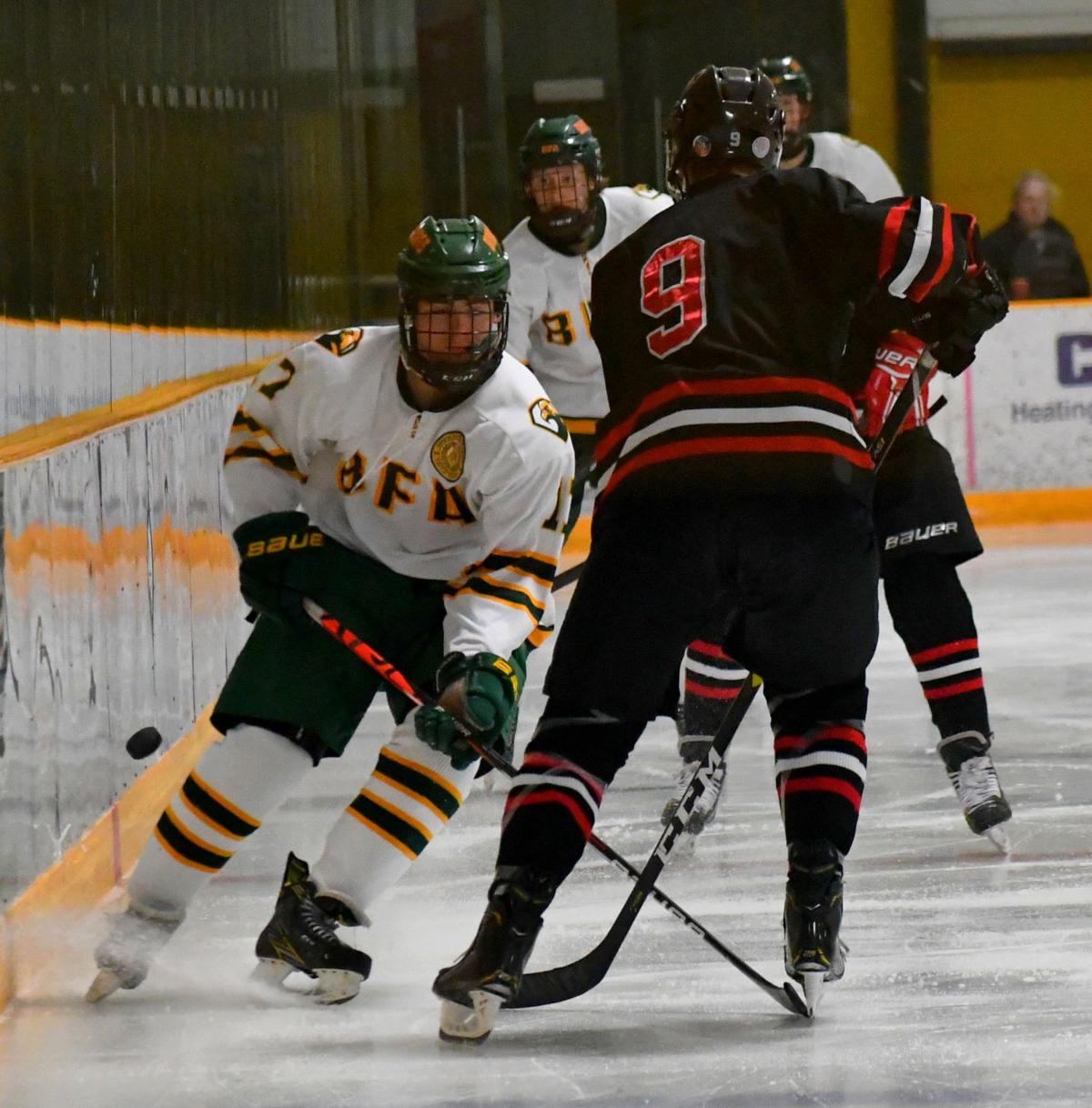 Derek Nadeau contests a Rutland player for the puck 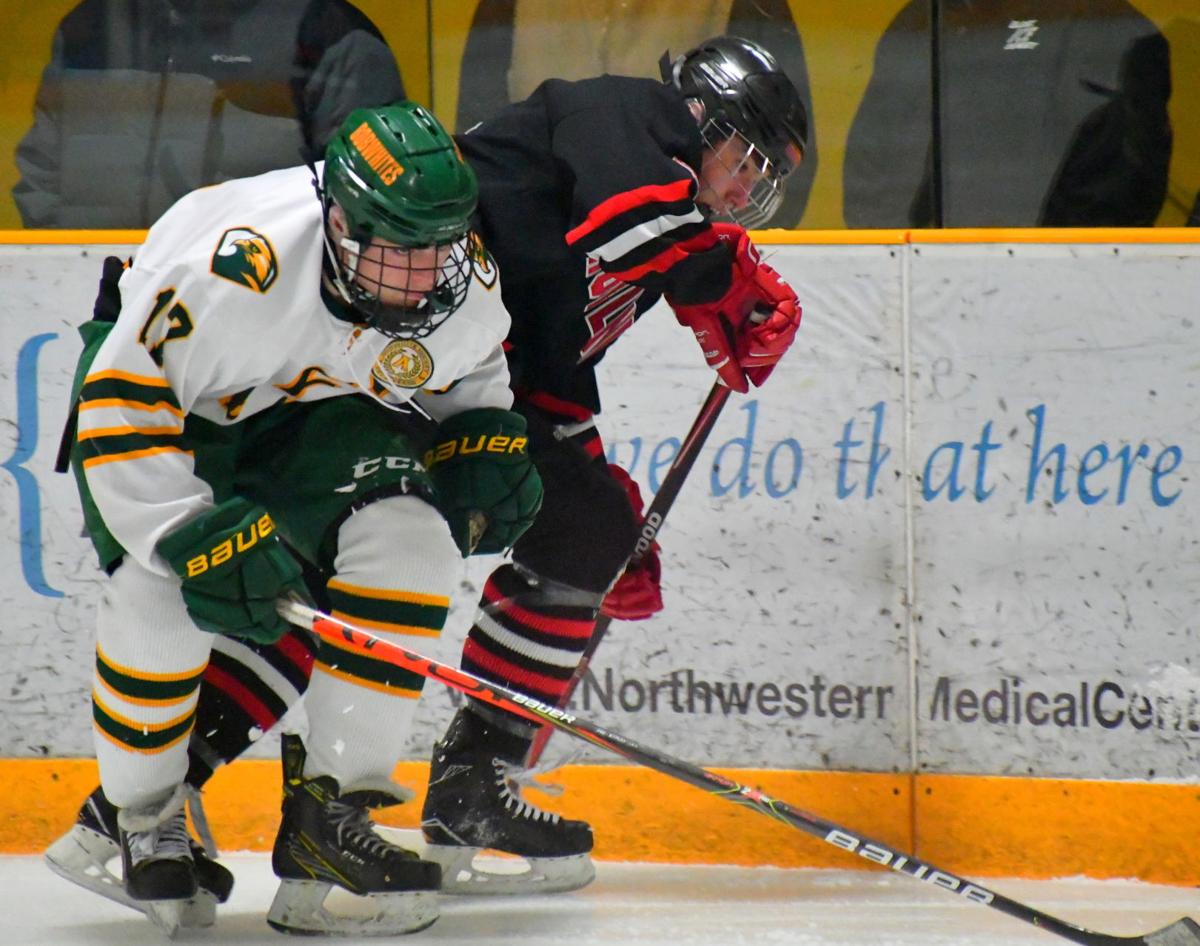 Derek Nadeau shows his grit as he battles with a Rutland player on January 21st.

Derek Nadeau battles for the puck in BFA’s game against Spaulding.

Derek Nadeau contests a Rutland player for the puck

Derek Nadeau shows his grit as he battles with a Rutland player on January 21st.

Derek Nadeau: Athlete of the Week

ST. ALBANS — Derek Nadeau, a forward on the Bobwhite hockey team, was selected as Athlete of the Week for his excellent performance in games against Spaulding and CVU last week.

Nadeau netted the first hat-trick of his hockey career against Spaulding, scoring a goal in each period of the game.

“I was ready to get that third goal,” said Nadeau, “but I couldn’t do it without the rest of the team.”

Nadeau especially enjoyed the win against Spaulding, a team they fell to early in the season in a hotly contested 1-0 game.

“We wanted revenge last Saturday, and we hit it out of the park,” said Nadeau.

“We played as a team--working on getting the puck up to the defense and out of the corners. We’ve been working hard in practice, and it shows.

“Parker Gratton set me up on two of my goals; he worked hard for those assists,” said Nadeau. “I’m happy to have Parker playing on the same line. We’ve played together for a long time, and we have great chemistry.”

Bobwhite coach Toby Ducolon has been pleased with Nadeau’s contributions to the team.

“Derek is a really nice kid and four-year player on varsity,” said Ducolon. “He’s very hard-working, and he’s having a solid senior year. He’s a big part of our team’s success this winter!”

Nadeau faced a big challenge during his four-year career, but the enjoyment he’s taken from this year has made it worthwhile.

“This has been my favorite year of BFA hockey,” said Nadeau. “We have great team chemistry, we’ve been passing well, and we’re all friends with each other.”

“The whole team leads by example; we see each other working and doing well, and we want to work for each other.

“We have skilled players, but our hard work is helping us more than our skill, and that’s helping us get things done. We’re unselfish, too, which is good.”

Nadeau credits his teammates for executing on the ice, but he also recognizes the value of having a veteran coach like Ducolon.

“The confidence and the professional way the coaches work--they’re like our parents--we don’t want to let them down, and if we do, we want to change something.

“The coaches are fair,” said Nadeau. “We have line meetings and individual meetings with them, and they will be straight up honest with you and let you know what they believe you need to do to be better.”

Nadeau has also loved the opportunities the coaches have given the team to bond.

Looking back over his career at BFA, Nadeau paused to reflect on the journey.

“I was happy to make the team as a freshman. I was on the fourth line,” said Nadeau. “My confidence wasn’t there that year, and I didn’t play as much as I was used to.”

Nadeau made the team his sophomore year, but his season was cut short.

“I broke my hip, probably during soccer, and had to take the season off,” Nadeau recalled.

“I didn’t know it at the time, but I tried out for the hockey team with a broken hip. I found out it was broken the day before the first game. I felt like I was never going to get back to hockey.”

“My junior year, I was happy to be 100%, but my confidence was shot,” said Nadeau, candidly. “I was happy to have my team there for me; if I hadn’t them, it would have been much harder.”

Nadeau has been soaking up every moment of his senior season.

“This has been the best year,” said Nadeau. “The boys are always happy, and I enjoy going to hockey every day. Bill O’Neil, one of our coaches, he’s been there for me. He makes my day.”

Nadeau, who’s been on the ice since he was three, thanked his family for their support.

“My grandparents, Barb and Frank Flemming, go to all my games,” said Nadeau. “They’ve been there through youth hockey and high school. Even if I have a bad game, they are still there for me.”

“My mom and dad (Shelley and Roger) keep me going. I’m happy they made me play hockey, it’s the best sport ever.

“I love everything about the game, the crowd, the skates, the sticks, and most of all the relationships. You’ll have those relationships forever.”

Nadeau had wise advice for younger athletes eager to be Bobwhite hockey players.

“If you’re coming in as a freshman and you make the team, playing time might not be on your side. You still need to work hard and show the coaches you deserve to be there,” said Nadeau.

“I wouldn’t be where I am without the coaching staff and the boys, even the ones who’ve left. They taught me how to be a good hockey player and a good person, and that’s valuable for the rest of your life.”