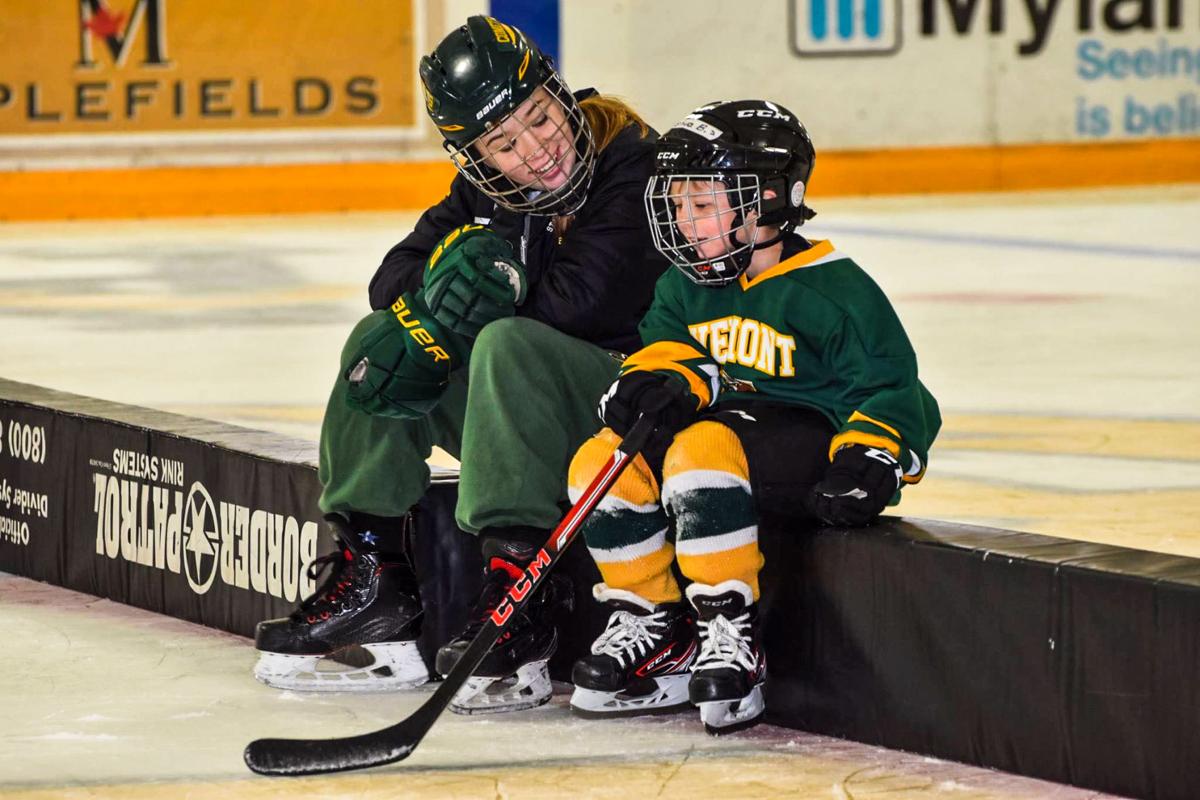 Haliey Savage chats with a young hockey player during a practice. 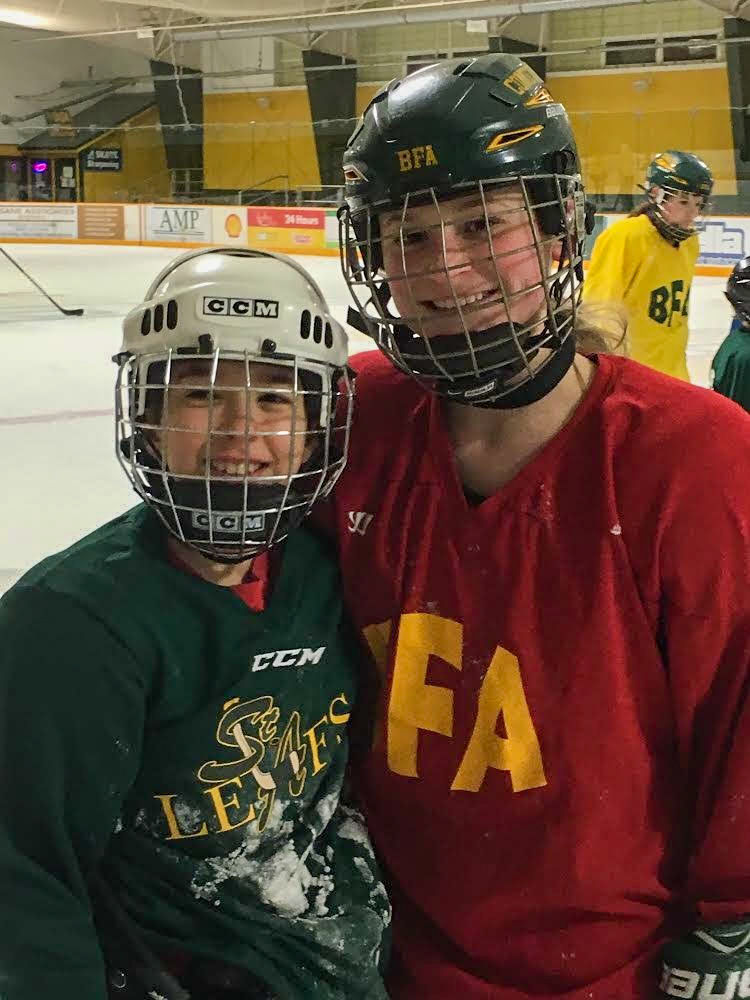 Chloe Rouleau poses for a photo beside her younger brother Derrick at the rink. 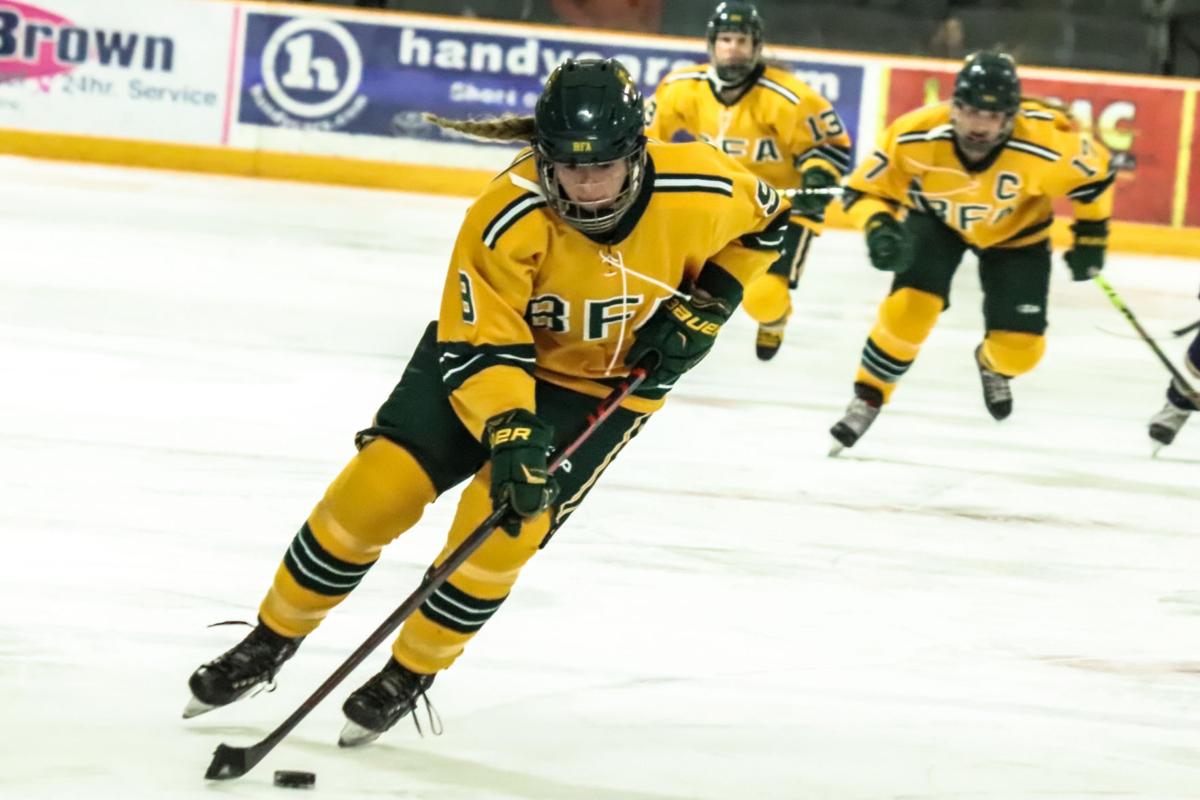 Carolyn Perry skates with the Comets this winter. 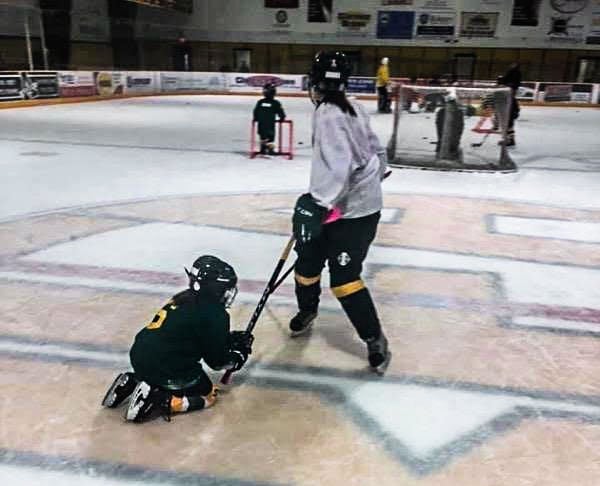 Emma Lovelette works with a young hockey player during a practice this winter.

Haliey Savage chats with a young hockey player during a practice.

Chloe Rouleau poses for a photo beside her younger brother Derrick at the rink.

Carolyn Perry skates with the Comets this winter.

Emma Lovelette works with a young hockey player during a practice this winter.

Each of the girls volunteered with the special needs hockey program for the past two years.

Volunteering with the special needs kids wasn’t a new concept for Rouleau, whose 12-year-old brother Derek has autism. She’s also volunteered with the Special Olympics and the Franklin County Maple Leafs.

“It’s cool to watch Derek interact with other people. It really makes a difference in his day when he gets to spend time with others doing something he likes to do,” said Rouleau.

“At special hockey is a safe place for them to be themselves, to make friends, and to have a good time.”

“We did a scrimmage and gave each of the kids a chance to score a goal,” explained Rouleau. “They were so excited to score--it seems small, but it meant so much to them.”

Rouleau enjoys the relationships she builds with the kids and families.

“It’s cool to see people involved in the program when we go out in the community. The kids smile and hug me and ask me when we’re going to see each other next.

Each year the Comets volunteer to help with the SASA youth programs. Lovelette opted to spend her volunteer time with the special needs kids.

“With the other programs, you work with bigger groups of kids and don’t get to know them as well. With special hockey, we worked with the same kids every week,” said Lovelette.

“I enjoyed seeing how much they developed. It was great to see the small victories they had as they learned.”

Lovelette felt the impact of the program in her own life.

“My experiences with special hockey helped remind me that it’s important to enjoy the small victories.”

“Working with the kids helped me figure out what I wanted to do for the rest of my life,” said Savage. “I’ve decided to study occupational therapy with a focus on pediatrics.”

Savage, a life-long athlete, knows the value sports have added to her life, and she’s glad to see all kids get to experience that.

“Special hockey gives these kids a chance to learn lessons from athletics, hang out with their friends, and play a sport.”

Savage recalled one young girl who was exceptionally quiet at the practices and struggled with her skating.

“One day, I took her hands and skated backward while she skated forward. I taught her how to skate, and that was so cool! And this year, she really came out of her shell!”

Savage loved seeing the kids at her Comet games.

“They’d be so excited to see us; they’d wave and bang on the glass. You felt like a superstar,” said Savage, smiling.

She encouraged others to volunteer.

“There’s no disadvantage to helping out. It makes you feel good, and you really are making a difference in people’s lives.”

This year, the St. Albans Leafs Special Hockey team traveled to a tournament, and although Savage couldn’t attend due to her hockey schedule, she loved keeping tabs on the players through Facebook.

“Some of the kids scored their first goal, and some got to ride on the Zamboni; it was so heartwarming to see.”

Perry has also been volunteering with the program since it began.

“The kids surprised me the most. They had a great time, and when they saw me outside of hockey, they’d ask if I’d be at their next practice or if I’d go to one of their tournaments.”

Spending time with the kids gave Perry a renewed perspective on the game.

“These kids get forty minutes of hockey a week, and I got to play every day, for two hours a day with my teammates. It encouraged me to go 100 percent.”

“Seeing Mr. Cioffi with the kids was an eye-opener,” said Perry. “We come to high school practice to prepare to win!

“It was fun to see our coaches relaxed and having fun with the kids at special hockey practice. It helped me build a closer relationship with them.”

Looking back, Perry recalled a moment that stood out vividly this season. The Comets were on their way out to the ice, and a special hockey player stopped her.

“He asked me if I was going to go to his games, and he let me know he was there to cheer my team and me on. It’s so cool to see them evolve as hockey players and as people.”