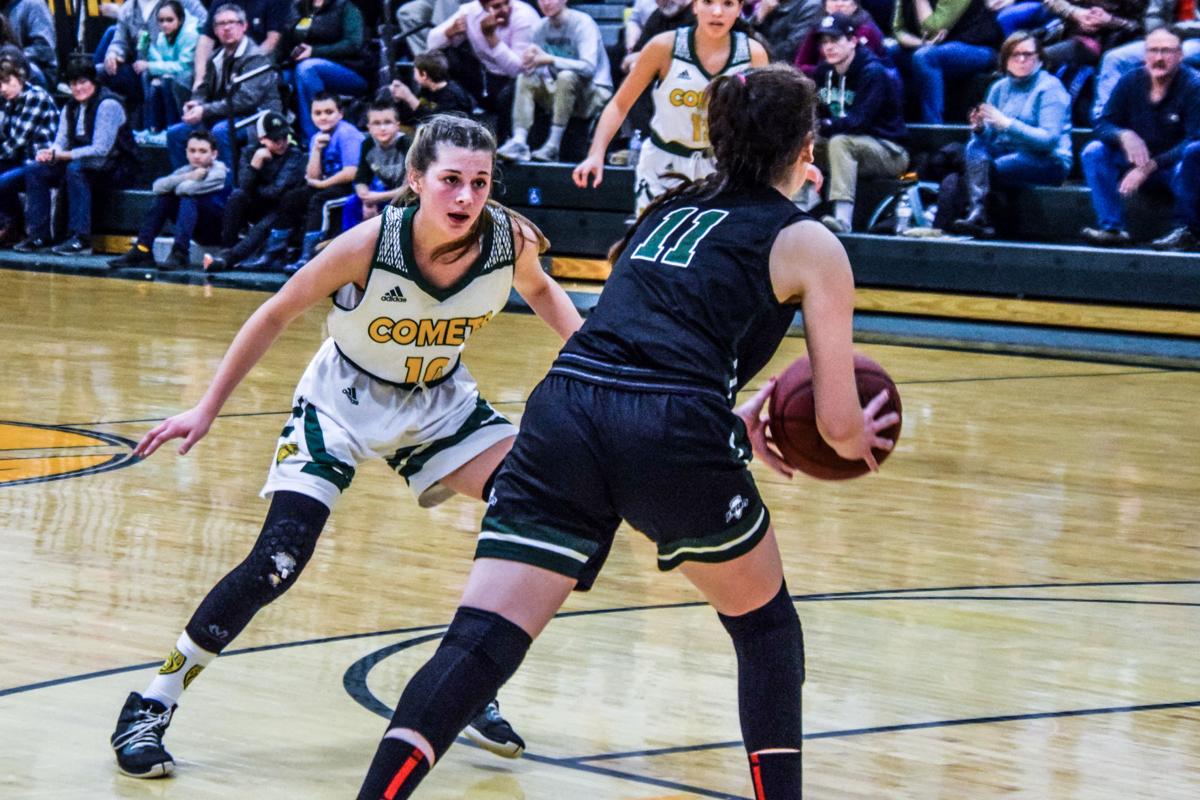 BFA’s Alexis Kettell pressures the ball in the second half of the Comets victory on Friday night. Kittell finished the game with 6 rebounds and 2 steals. 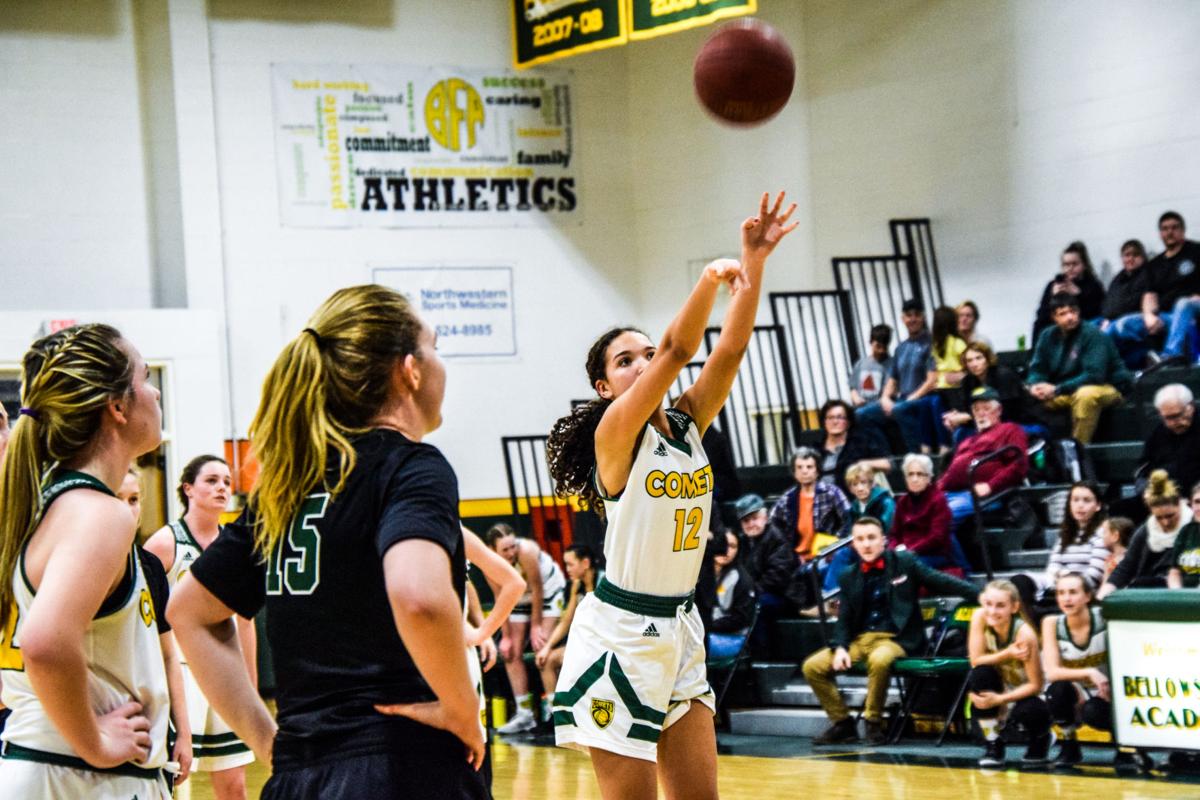 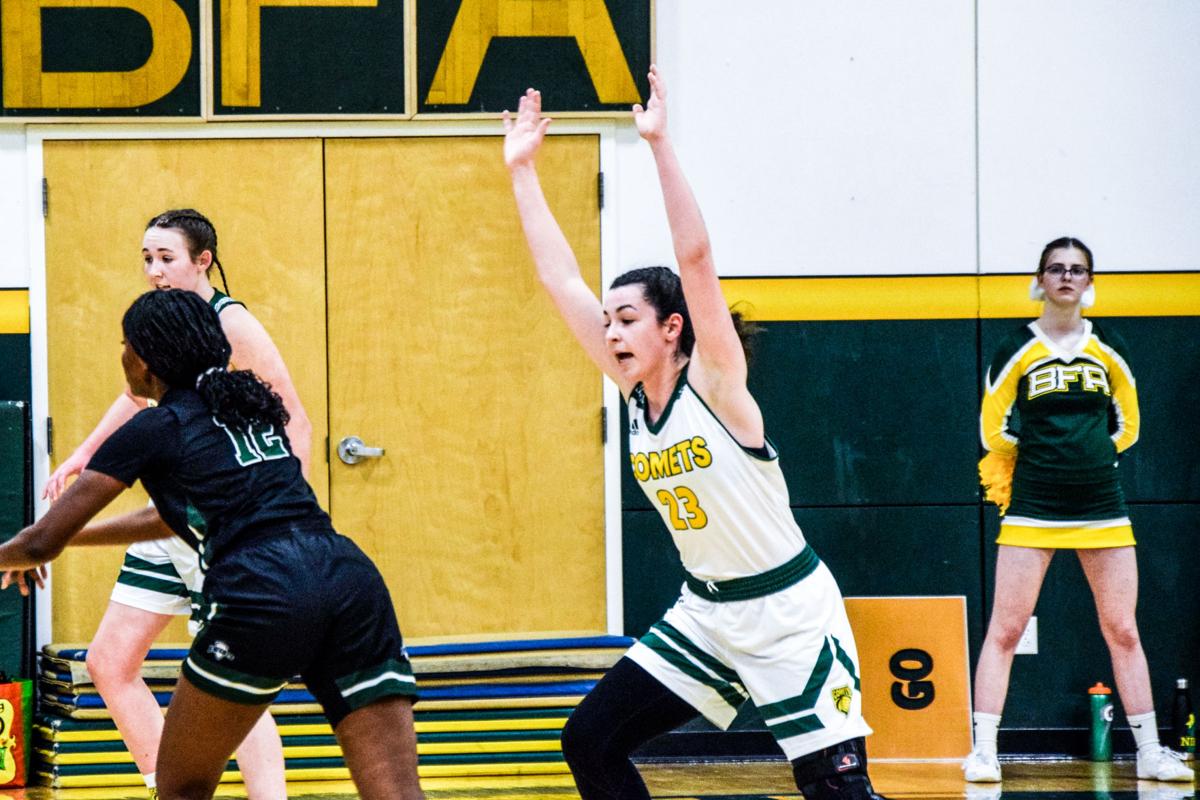 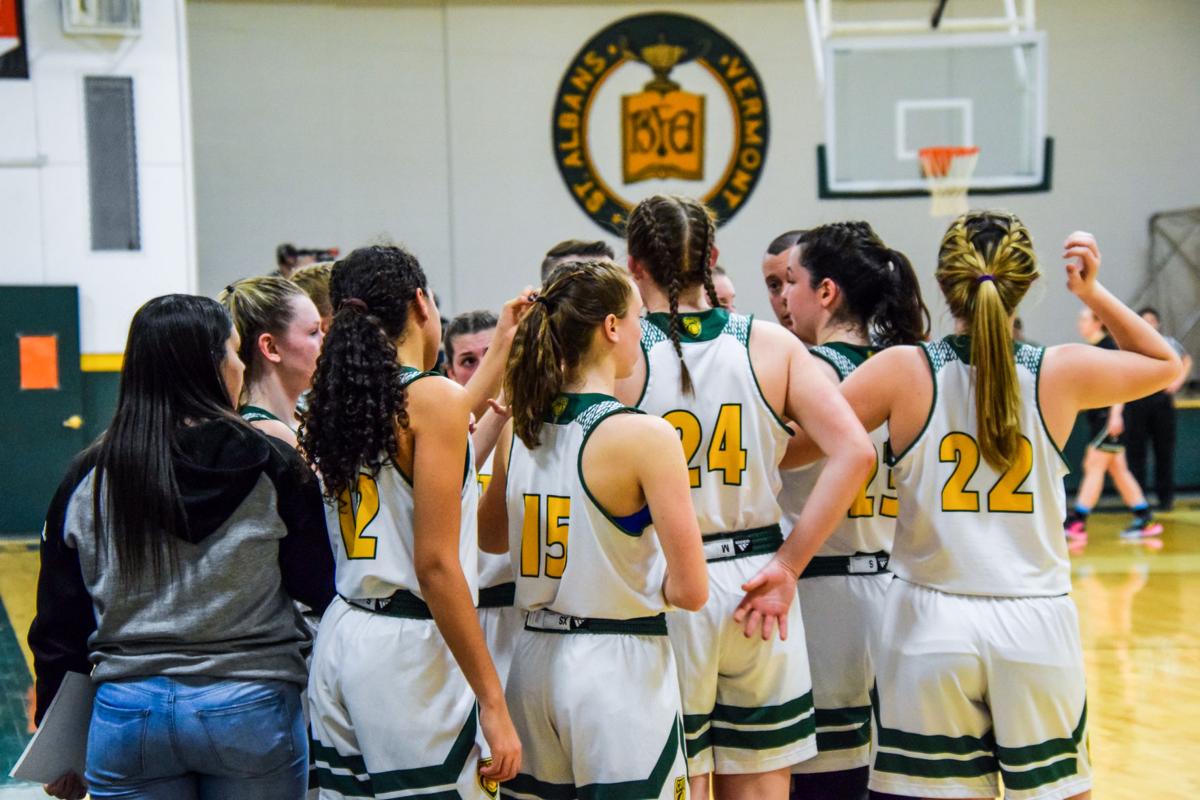 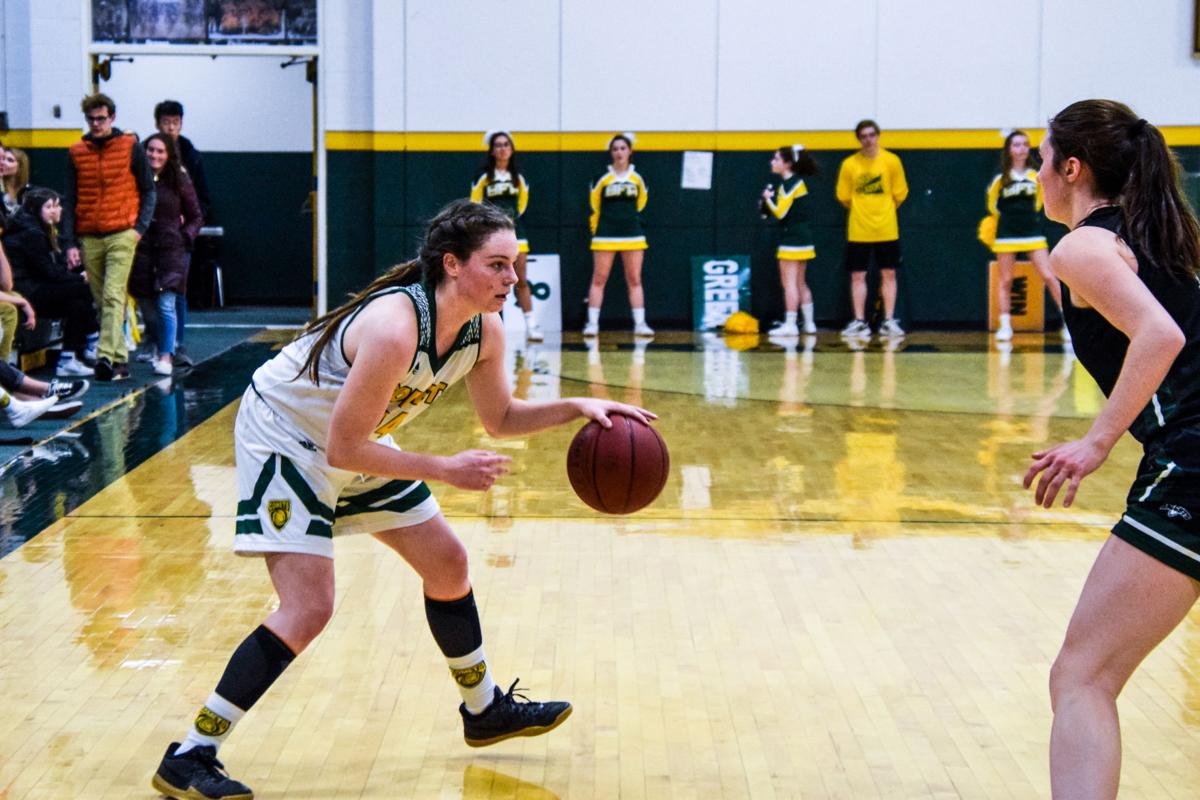 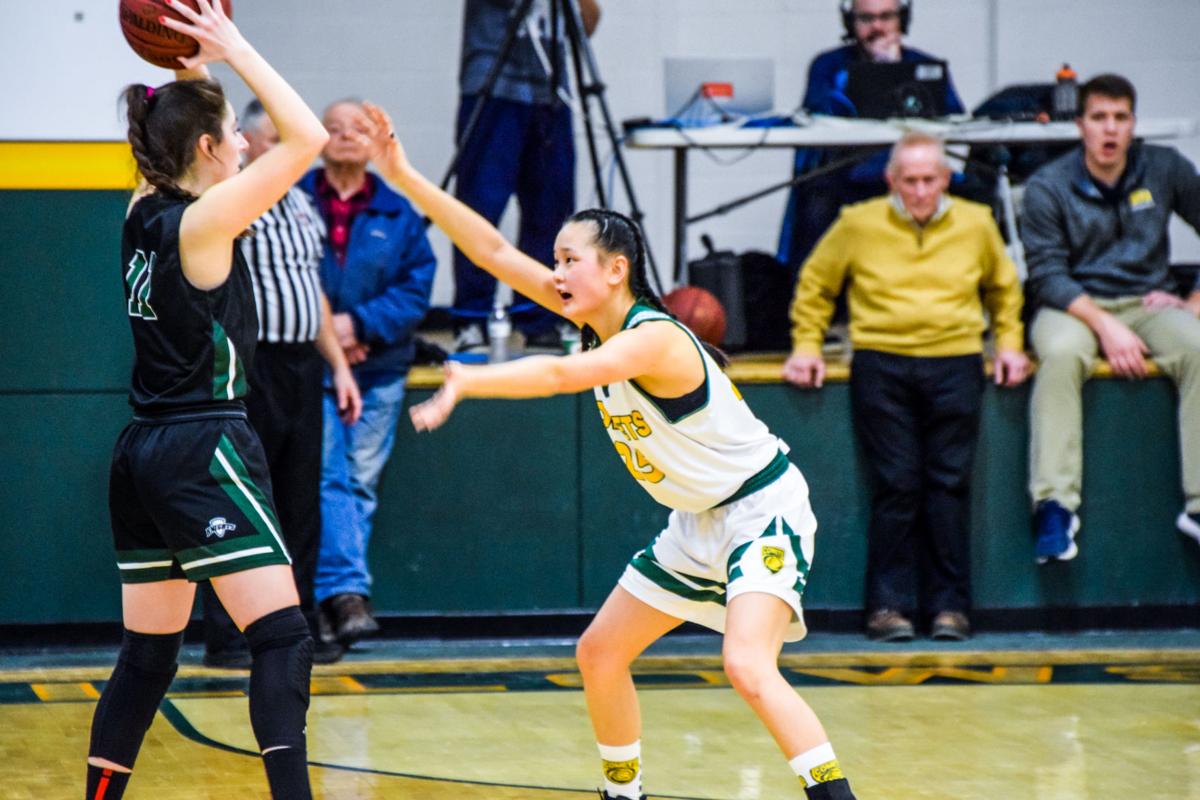 BFA’s Alexis Kettell pressures the ball in the second half of the Comets victory on Friday night. Kittell finished the game with 6 rebounds and 2 steals.

SOUTH BURLINGTON — Friday night’s game against Rice might not have been the best game offensively for the BFA-St. Albans girls basketball team, but the defense stepped up in a big way.

After trailing to start the second half, the Comets only gave up 12 second-half points on their way to a 38-33 win over the Green Knights.

“For whatever reason we just have a really hard time scoring against Rice,” said BFA coach Paul LaFountain. “I thought the team slowed it down when we had to, executed and defensively hustled all game long and that was what won us the game. We missed quite a few layups, but we did a good job getting back on defense and had girls diving on the floor for loose balls, which led to some fast-break points. The effort was the difference.”

The Comets were led by the defensive tenacity of Alexis Kittell, who made a number of plays throughout the game to not only make sure the Comets kept possession, but also energized the bench and crowd.

Kittell’s play was critical in a game that saw 12 lead changes and was tied five times.

“What she did was enormous for us today,” said LaFountain of Kittell. “She saved one under our basket, one at half court and she took a charge, so those are the kind of plays that turn the tide in the game and gave us a little extra pep in our step. When you have the whole bench up and celebrating after a play, it makes a big difference.”

Caitlyn Dasaro led the charge for the Comets with 12 points, three steals and five rebounds before fouling out with just over three minutes to go in the game.

Maren McGinn also chipped in 12 points to go along with eight rebounds. The depth of the Comets showed up to play when Dasaro fouled out late when the game was still a one-point contest.

“Caitlyn’s defense was phenomenal,” said LaFountain. “She focused on on-ball defense during practice and she was very, very good tonight. She had probably 15 deflections out there.

“And we were able to weather the storm without Marin on the floor for a lot of the first half,” he added. “She was on pace for a really great game, but a couple of calls kind of squashed that for her.”

BFA entered the fourth quarter with a 30-27 lead that was shrunk down to a one-point lead after Rice’s Greta Alexandra-Parker hit a putback.

Carley Hill (11 points) and Kristen Varin each scored a basket on back-to-back possessions for the Green Knights to make it a 34-33 game with just under five minutes to play. McGinn added a basket to make it a three point game before MacKenzie Moore hit a pair of free throws to seal the game late after Rice failed to tie the game.

“To be able to have Marin out for a good part of the first half and Caitlyn have to leave in the middle of a tight game and come away with a five-point win was huge,” said LaFountain. “Things got interesting when Pippa got her fourth foul, but we are comfortable with anyone on the floor in any situation, so I think tonight was another good showing of our depth.”

It was another solid defensive outing for the Comets (10-4), who will need to continue that trend through their last six games of the regular season starting with Spaulding on Monday and CVU on Thursday.

Out of the final six games, three come against teams that have already beaten the Comets this season. The fourth team was Rice earlier this year.

“We have been calling this last stretch of the regular season our revenge tour and, it started tonight,” said LaFountain. “We lost to almost every team we are about to face and we believe we can beat every single one of them.

“I don’t think anyone in the state thinks we have any chance against CVU, but I sure do, and I think we have a good chance in our gym. But we can’t overlook Spaulding this time like we did the last time (45-38 loss on Jan. 24), so we will have to take care of business on Monday and go from there.”