Starting at
$5.00 for 30 days
Get Started
View all rates
You are the owner of this article.
Edit Article Add New Article
You have permission to edit this article.
Edit
Subscribe | Sign In
Home
News
Sports
Classifieds
Obituaries
Editorial
Business Directory
Things to Do
About Us
e-Edition
2020 Meet Your Business Community
2020 Resource Directory
NEWSLETTERS
1 of 13 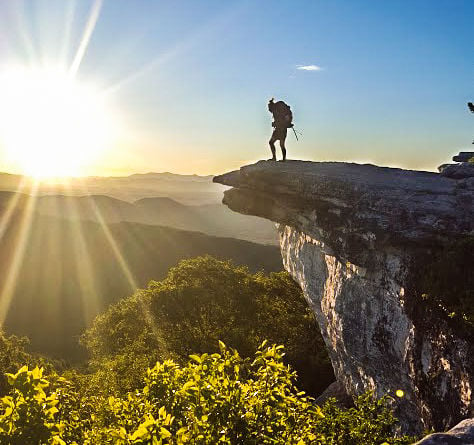 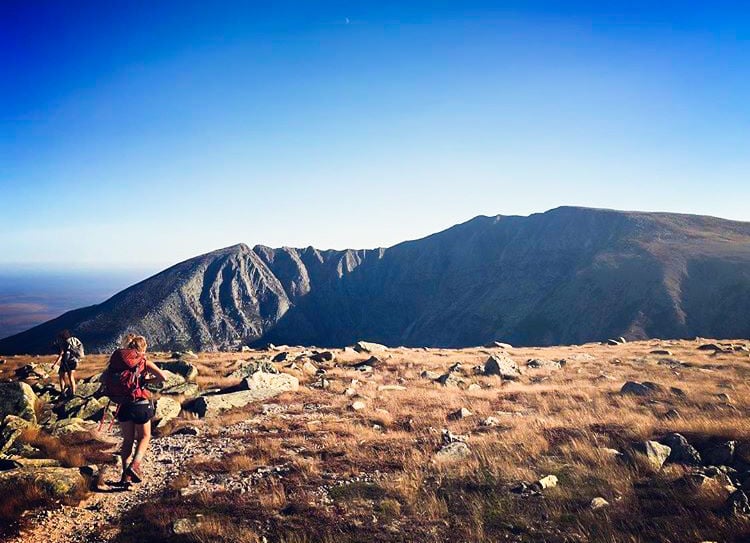 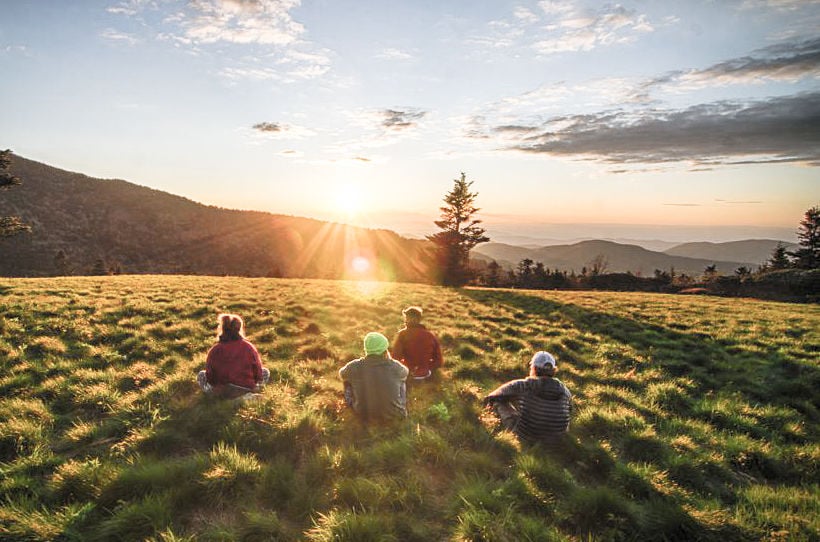 Mariah Choiniere takes in a sunset on Roan Highland on the Tennessee — North Carolina border. 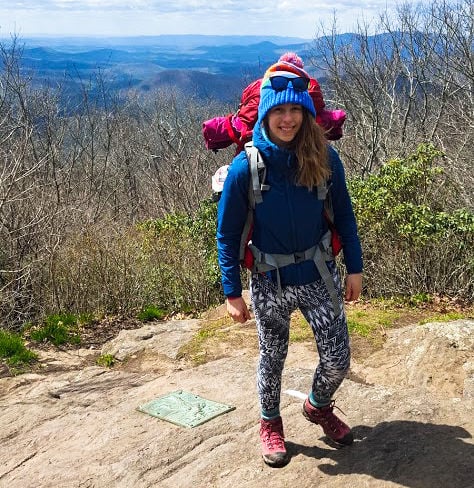 Mariah Choiniere heads out on the first day of her 2,000 mile journey. 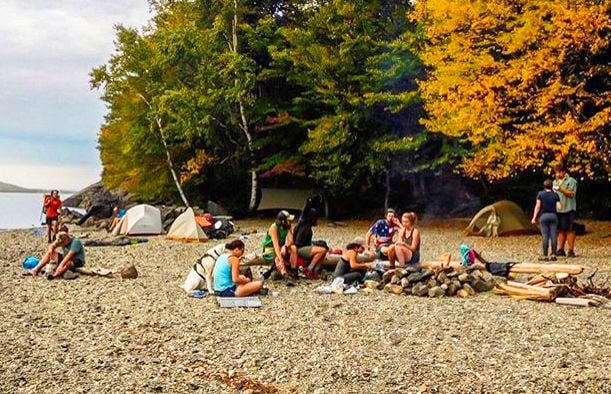 Choiniere and her 'finishing family' camp at Flagstaff Lake in Maine. 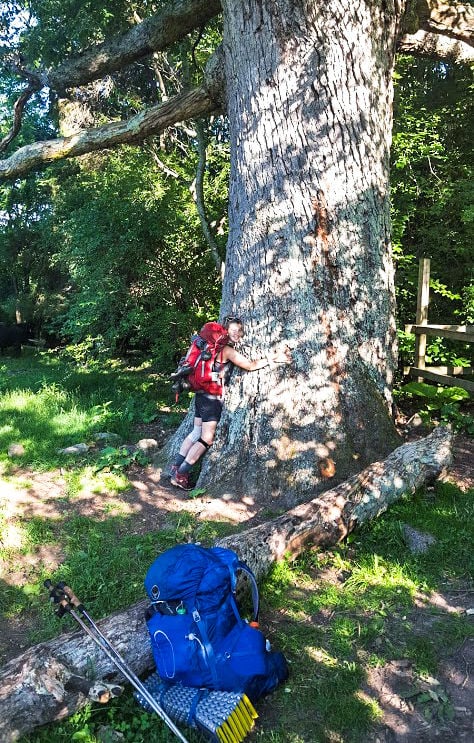 Mariah Choiniere finds a giant tree along the way. 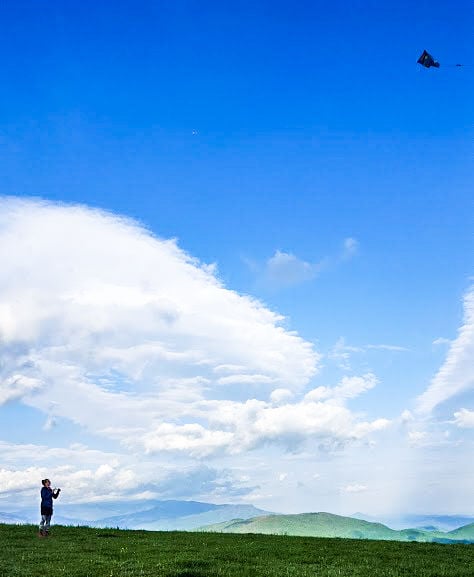 Mariah Choiniere flies a kite on Max Patch on the North Carolina-Tennessee border. 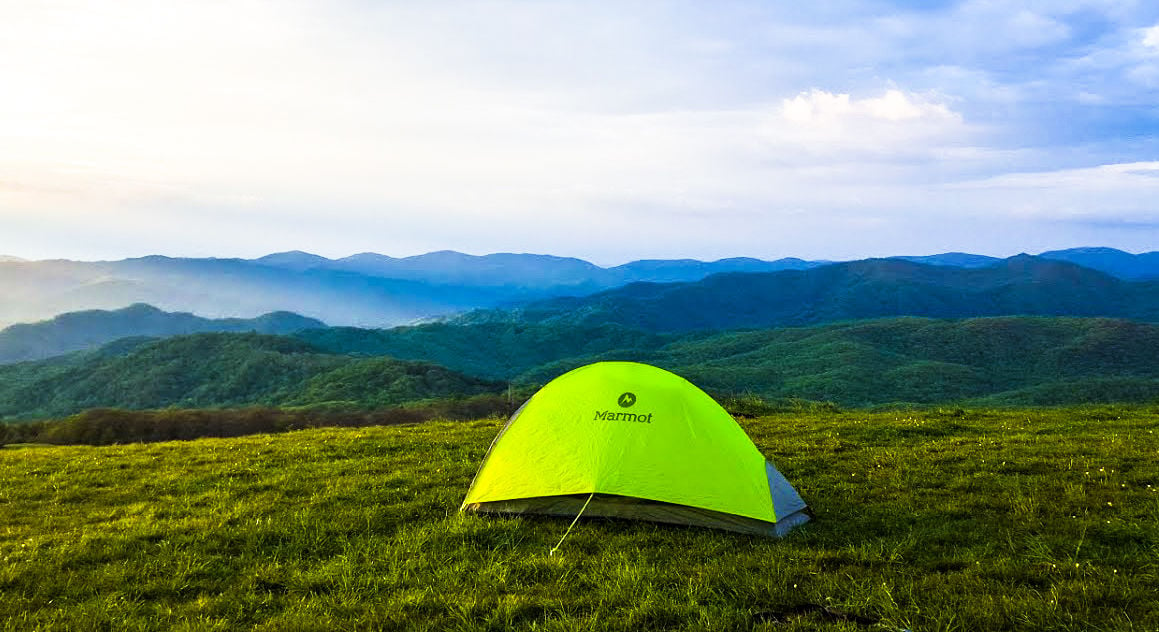 Mariah Choiniere sets up for the night on Max Patch. 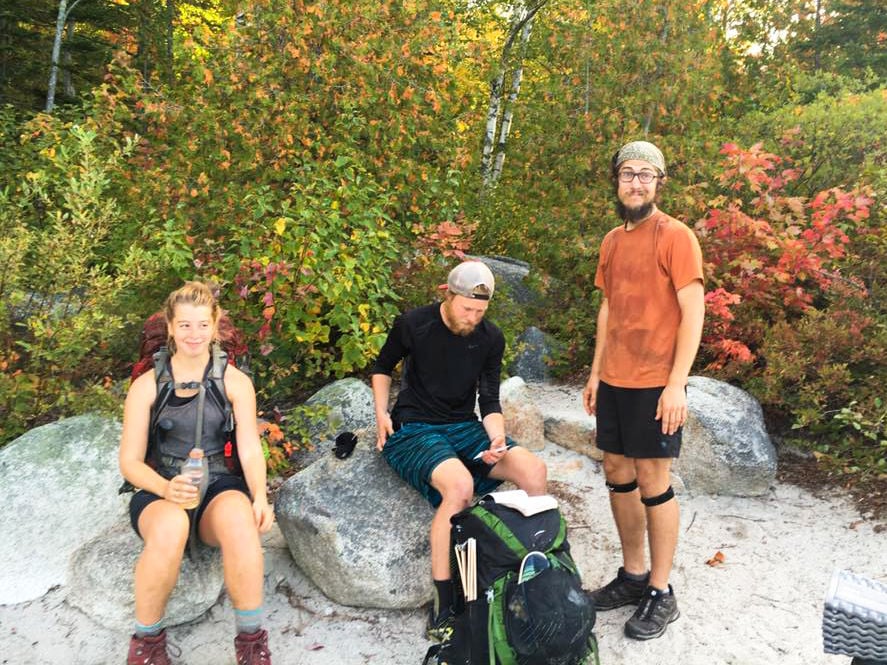 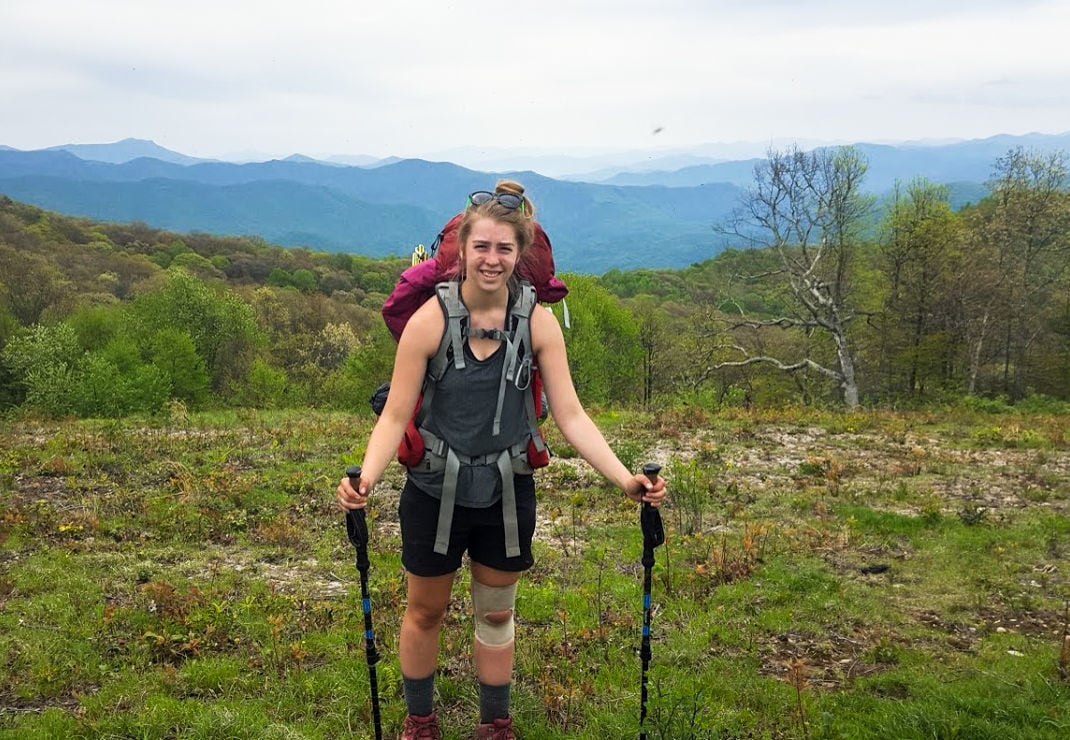 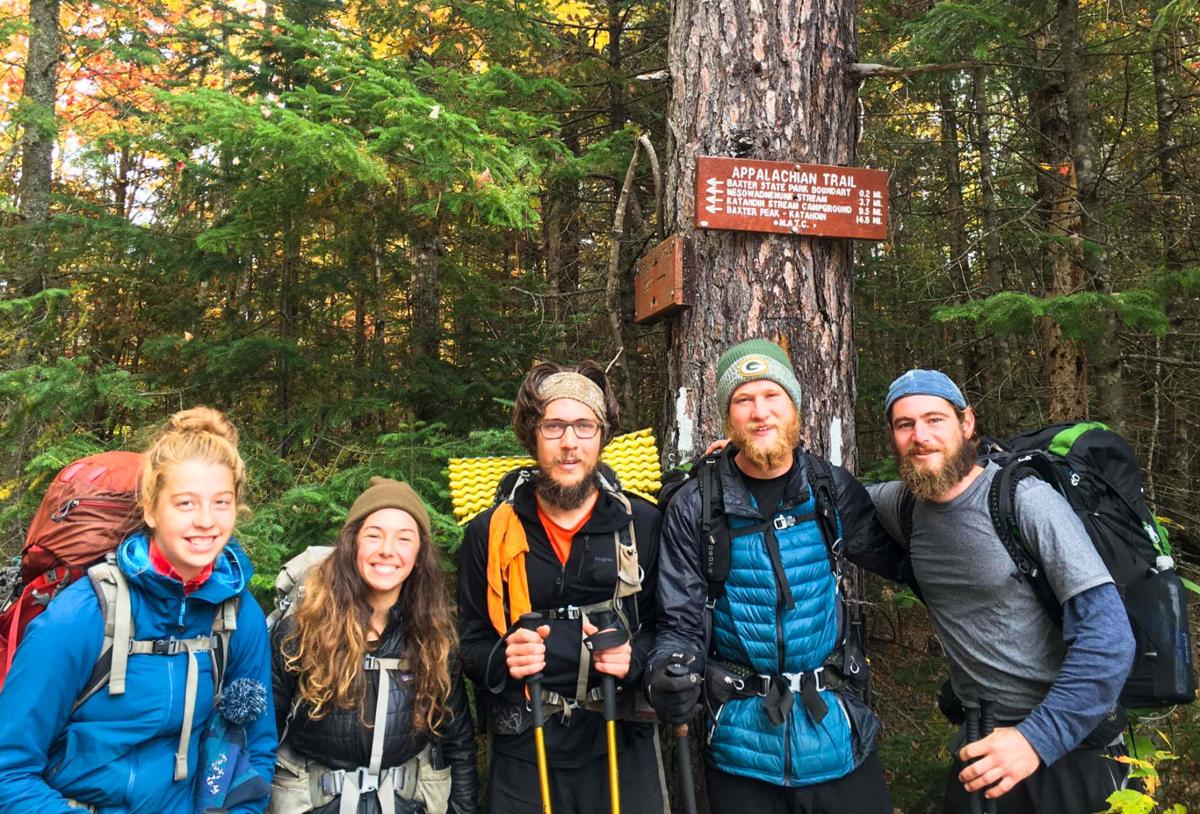 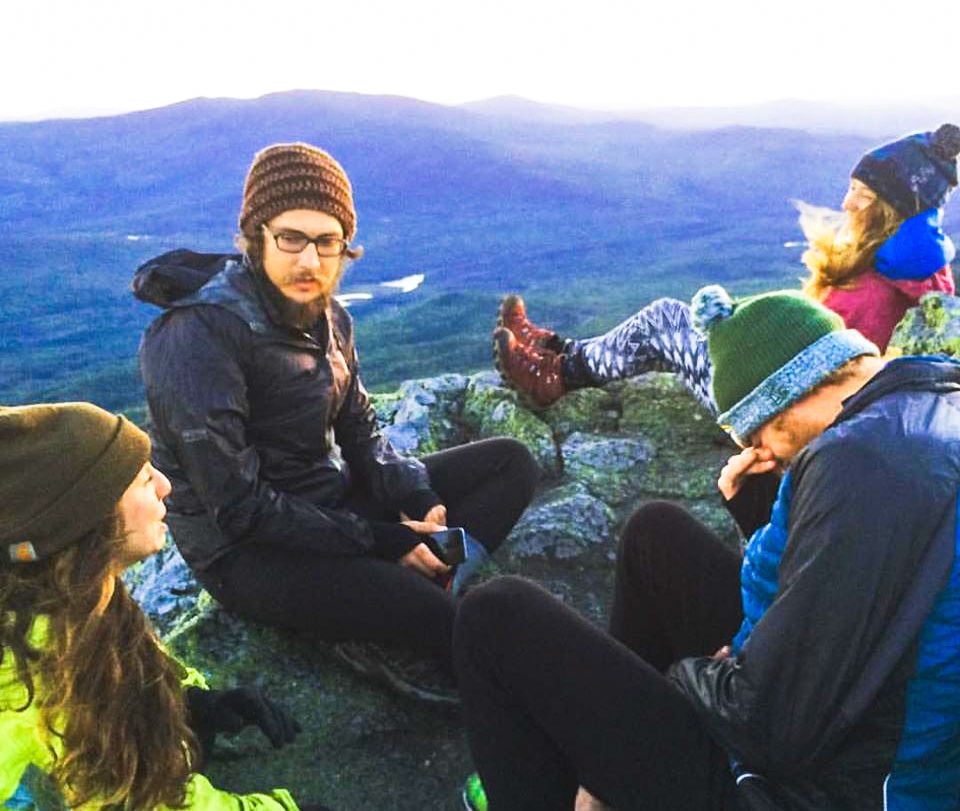 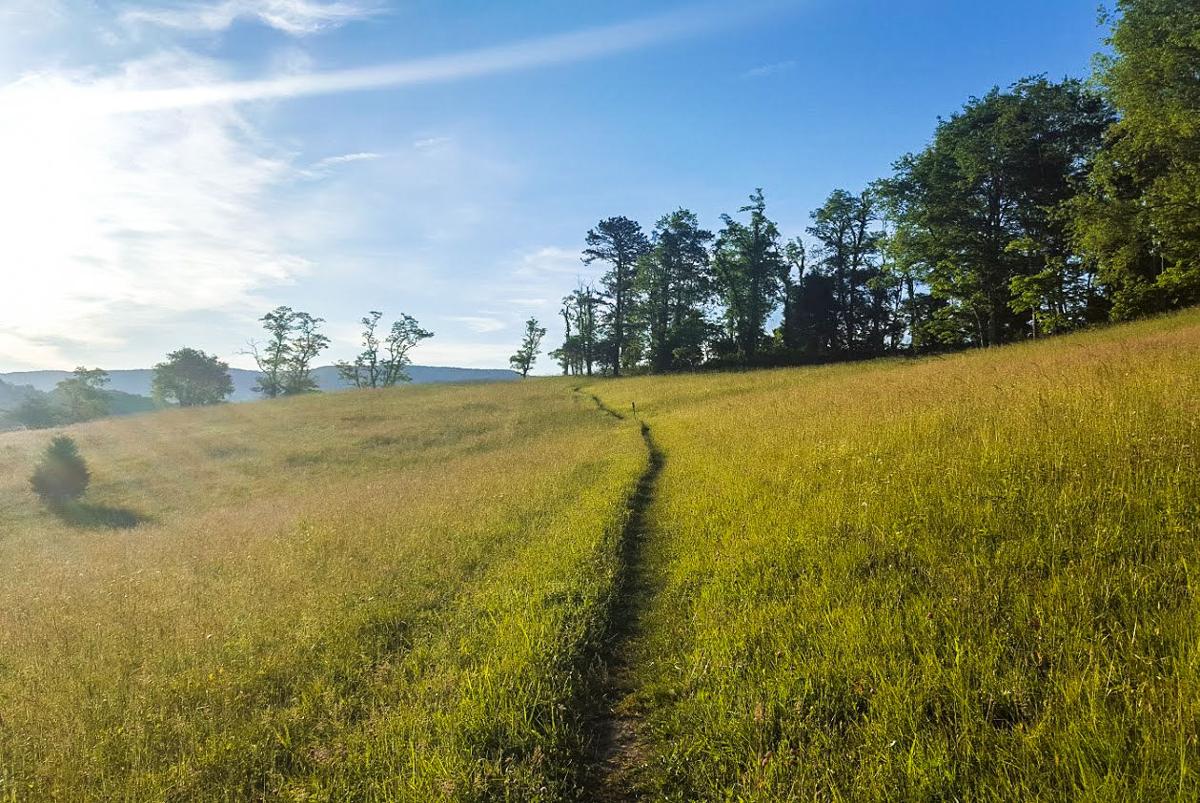 Mariah Choiniere shared a photo of the beautiful Virginia fields.

Mariah Choiniere takes in a sunset on Roan Highland on the Tennessee — North Carolina border.

Mariah Choiniere heads out on the first day of her 2,000 mile journey.

Choiniere and her 'finishing family' camp at Flagstaff Lake in Maine.

Mariah Choiniere finds a giant tree along the way.

Mariah Choiniere flies a kite on Max Patch on the North Carolina-Tennessee border.

Mariah Choiniere sets up for the night on Max Patch.

Mariah Choiniere shared a photo of the beautiful Virginia fields.

FRANKLIN — In the summer of 2016, Mariah Choiniere set out to explore the ‘Green Tunnel.’ The 20-year-old bought a one-way bus ticket to Georgia and, on April 7th, began a solo thru-hike of the Appalachian Trail.

“I didn’t have a lot of backpacking experience going into this,” said Choiniere, candidly.

“I’d done some overnights and quite a bit of day hiking in high school and as a young adult, and at summer camps as a kid.”

Hiking the Long Trail during that summer was Choiniere’s initial plan, but after a long winter of work, she ‘hit a wall,’ quit her job, and bought her bus ticket.

“I had two weeks to prepare for the hike, get my gear, and figure out what I had signed myself up for,” said Choiniere.

“I’d always wanted to hike the AT; it wasn’t a spur of the moment thing. The Long Trail was supposed to be the stepping stone, but hiking the AT was just what I needed to do.”

The Appalachian Trail is a 2,189-mile trail that begins in Georgia and ends at the summit of Mount Katahdin in Maine. The trail runs through 14 states and requires an average of 5,000,000 steps to complete.

After a 33-hour bus ride and a bout of food poisoning, Choiniere went straight to the trailhead.

“The hardest step is the first step, just getting there. It was surreal standing on top of Springer Mountain and fathoming that the same path that you’re standing on will lead you home to the North East,” said Choiniere.

Choiniere found the little things, like learning to set up and tear down her tent efficiently, to be challenging in the early days of the trip.

“It takes a couple of weeks to get your rhythm down. Three days in, I met a group of people who gave me good advice. They helped me shake my pack down and lose the excess stuff I had.

“Weight is a big part of backpacking; it’s hard to know what you do and don’t need, but you figure that out as you go.”

The first couple of weeks on the trail, Choiniere took in the experience with wonder.

“It was wild watching the miles accumulate behind you. Every day was exciting--always forward progress, and I stuck with the group I met the first week for a while.”

Around her 100th mile, Choiniere’s knees began to give out, and she had to take a zero-day in the woods to rest.

“I was in so much pain. One of the original people I met caught up to me and gave me a knee brace; at mile 140, I went to urgent care.”

Choiniere was diagnosed with tendonitis in both her knees.

“There was nothing they could do; I was prescribed super-strong ibuprofen and told to stretch. I was in tears at night; it hurt so badly,” explained Choiniere.

“I’d spend 2-4 days at a hostel or campsite to rest and recover until the pain was gone. My knees got stronger, and I didn’t need as much recovery time.”

During the early stages of tendonitis, Choiniere averaged eight to twelve miles a day. By the time she reached Virginia, she was averaging 20 miles a day.

“The trail is very diverse; from Georgia to Virginia, it’s very scenic, and you’re climbing 5,000 footers. We even got about a foot of snow in the Smokies,” explained Choiniere.

“The middle of the trail was mostly traversing farmland and rolling hills, and the mid-Atlantic was also very low lying.”

Midway through the trip, Choiniere’s cell phone broke, limiting her ability to take photographs or update her family.

“I sent them letters and postcards, and I’d have random people on mountains take my photo so that my family could send see I was alive.”

While there were days along the route that she spent alone, Choiniere did her best to stay at the shelters along the trail.

“That’s where everyone congregates, and you hear the stories of the day and the week. It’s a big social aspect of the trip.”

Telltales in the vegetation were the first clues that Choiniere was steadily making her way north.

“I remember seeing my first White Birch tree in Pennsylvania, and all of us from the North East were so excited; we knew we were almost home.

“Once I got back to Vermont, I was in a more rugged country. I was excited to get back to the North East; I’d been looking forward to that the whole way.

“My dad visited me in Rutland, and my grandmother met me in Norwich and hiked over the border to New Hampshire with me.”

When Choiniere arrived in New Hampshire, she found a familiar spot.

“The only part of the trail I’d hiked before was the Franconia Ridge; all of New Hampshire was gorgeous, and the summits were clear.”

Choiniere arrived at the Presidential Range on Labor Day, and hiked both days under bright blue skies.

“I timed it perfectly,” said Choiniere smiling. “I stayed at Lake of the Clouds hut below the summit of Washington, and I hiked to the summit for sunrise. It was one of the most beautiful sunrises I’ve ever seen.”

As Choiniere and the group she’d met up with earlier on the AT arrived in Maine, she had a realization.

“I’d been hiking with people on and off the whole trail, and I was aware that our ‘finishing trail family’ had formed. We stayed together for the rest of Maine,” said Choiniere.

“Hiking with that group through Maine made it so much better. We arrived in September at the height of the foliage season, and it was beautiful.”

Choiniere and her trail family took a month to cross through Maine.

“We didn’t want it to end; we wanted to soak in what we had.”

“The Mahoosucs were some of the most rugged mountains on the trail, often even more difficult than the Whites,” said Choiniere. “Truthfully, I had no energy through there. My body was done.”

There was one final challenge awaiting Choiniere and her friends: Katahdin, the northern terminus of the AT.

“The 100 Mile Wilderness before Katahdin was unreal. You have one final resupply, and then you cross 100 miles of nothing until you’re at the base of Katahdin,” explained Choiniere.

The exhausted group pulled off a 41-mile day, camping ten miles from the base of Katahdin.

“We left at 4 am the next day and caught a sunrise halfway up the mountain; it was another beautiful day.

“Katahdin was one of the most rugged mountains I’ve ever climbed; there’s nothing like it on the East Coast. At points, it’s just rebar drilled into rocks, and you’re just scrambling it.”

“I’ve never been so much in the present moment than I was out there on the AT. That hike changed my life; after a journey like that, you’re not going to be the same person,” said Choiniere.

“I went from talking about what I aspired to accomplish in my life, to pursuing my goals. It shifted my mindset and helped me gain a lot of confidence about going after what I wanted.”

Taking on a trip as extensive as hiking the Appalachian Trail is daunting to many, but Choiniere encouraged others to accept the challenge.

“Go! Don’t spend too much time researching and making concrete plans that you must stick to. An endeavor like this requires you to be flexible and adaptable to everything that happens.

“It takes two things to complete a thru-hike: you have to be stubborn, but you also have to be lucky.

“I had friends who got injured, got Lyme disease, and had to leave because of family reasons. I had a lot of luck to be able to complete the hike.

“When you are too focused on making deadlines or miles in a certain time, you miss out on a lot of great opportunities and people who are there to support you.”