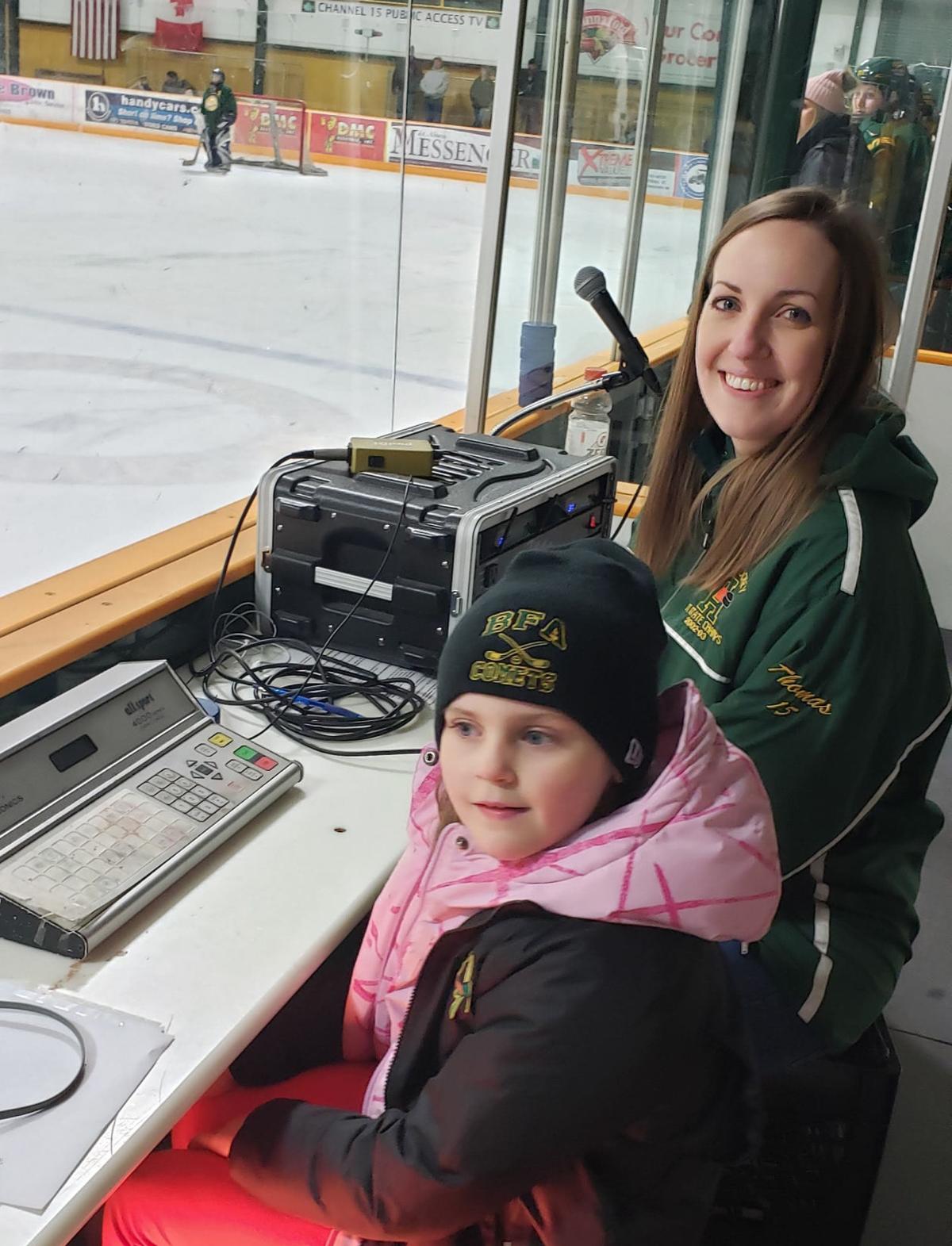 Micah Burdo watches a Comet game with her Aunt Amanda. 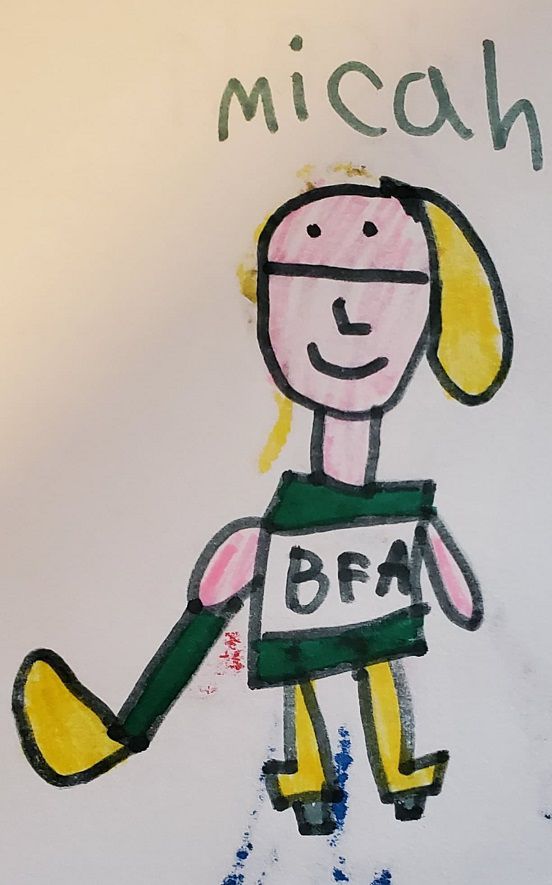 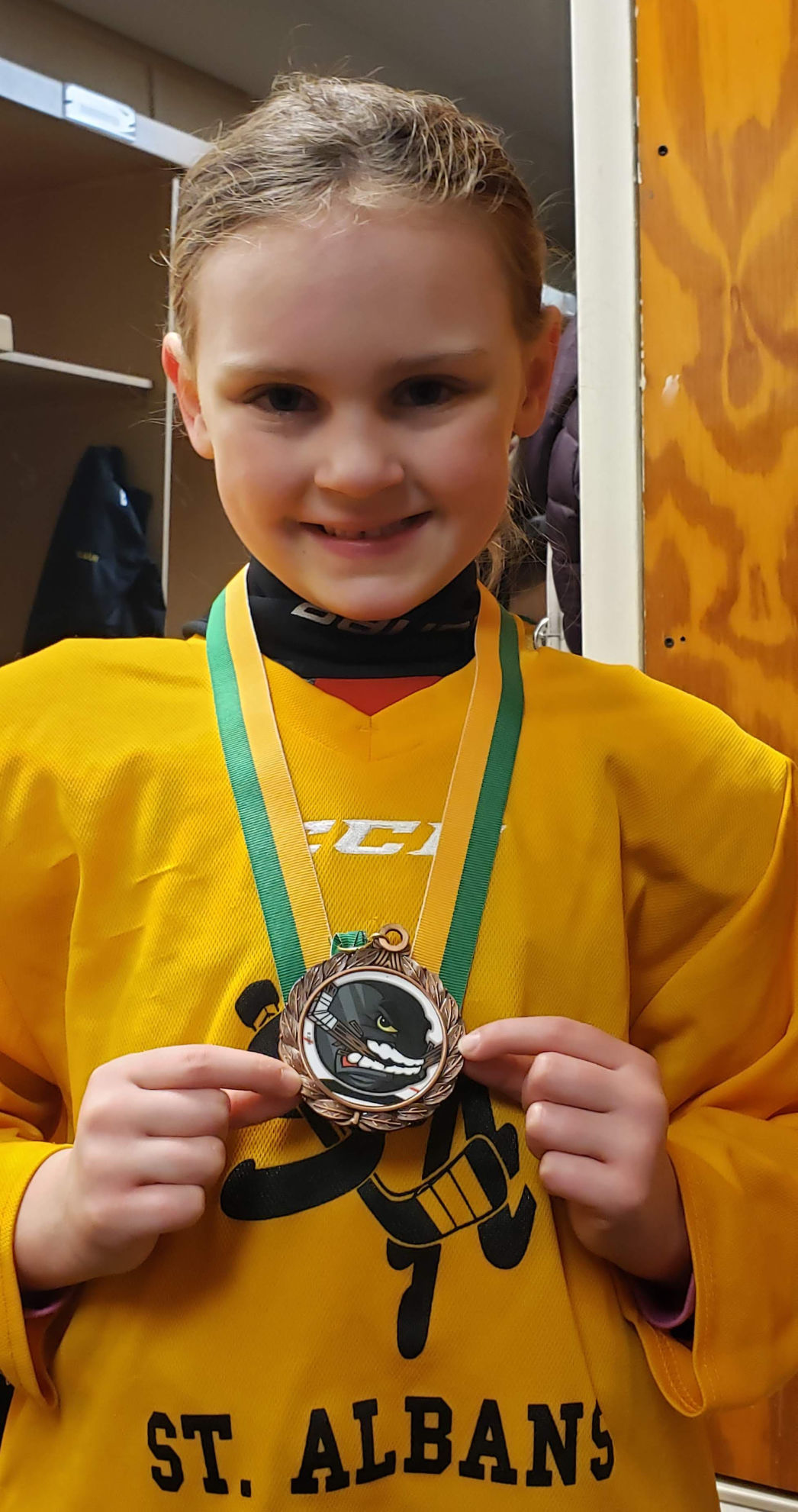 Micah Burdo displays a medal won during her SASA season.

Micah Burdo watches a Comet game with her Aunt Amanda.

Micah Burdo displays a medal won during her SASA season.

This month, the six-year-old entered a very special self-portrait in the USA Hockey magazine’s “Slaps Gallery Online Derby” contest. She’s currently in the voting process to secure a spot in the publication.

Micah is the granddaughter of Brad Thomas, a longtime supporter of the Comet hockey program.

Thomas, whose daughter Amanda was a Comet during her time at BFA St. Albans, has enjoyed watching things come full circle.

“When I go to the coaches’ room, Micah stands in the doorway and gives fist bumps to the girls when they go on the ice,” said Thomas.

“It’s like watching things come full circle. I can remember watching Maggie Piasceny, who went on to play for the Comets.

“She used to sit outside the locker room door when she was young; she then went on to play four years for the team. Now I see the same things with Micah-she’s following the team and hoping to play.”

Thomas has contributed to the BFA St. Albans hockey programs for decades.

Thomas is known for beginning the tradition of painting pucks for Comet and Bobwhite players when they scored their first goal or earned a shut out or a win.

He also coached youth hockey in the Coote Field days, videotaped games for Red Gendron, served as a PA announcer, Comet stat keeper, and a social media influencer for the Comet team.

According to Comet coach Luke Cioffi, Thomas has been painting pucks for the Comets since the girls’ program began. His daughter Amanda was an inaugural member of the Comets.

“Micah’s just getting to the point where she’ll start playing competitive games. This coming year she will be playing other teams rather than just practicing,” said Thomas.

“That’s a turning point for some kids. We’re hoping she stays with hockey, but if she decides she doesn’t want to, we’ll have to get her into basketball because she’s going to be a tall girl.”

Mike Burdo, Micah’s dad, found her drawing in a stack of papers and recalled a conversation from earlier in the winter.

“A couple of months ago, Micah noticed the USA Hockey magazine had a section with a bunch of children’s drawings, and she told me she wanted to enter the contest,” said Burdo.

“A couple of weeks ago, she drew a picture called ‘Future BFA Comet’. I found it in some papers and showed it to her; she told me she wanted to submit it, so I sent it in.

“Micah is a big fan of BFA and the Green and Gold. She loves the Comets, and her Aunt Amanda (Thomas) played for them, and she wants to play for them, too.”

Burdo noted that Micah already knows she wants to be number 15 like her Aunt Amanda.

“This is one of the best seasons she had on the ice, and she learned a lot. She also went to some of the Comet games and even watched the live stream of the boys’ championship game.”

Micah shared some of her thoughts on the team she’s preparing to play for.

“When I become a Comet, I want to skate and play games. I also want to help them win the championship!” said Micah. “They work hard and play hard, and they don’t lose a lot!”

Anyone who would like to can vote for Micah on the link located on the SASA Facebook page.