Starting at
$5.00 for 30 days
Get Started
View all rates
You are the owner of this article.
Edit Article Add New Article
Subscribe | Sign In
Home
News
Sports
Classifieds
Obituaries
Editorial
Business Directory
Things to Do
About Us
e-Edition
NEWSLETTERS
1 of 12 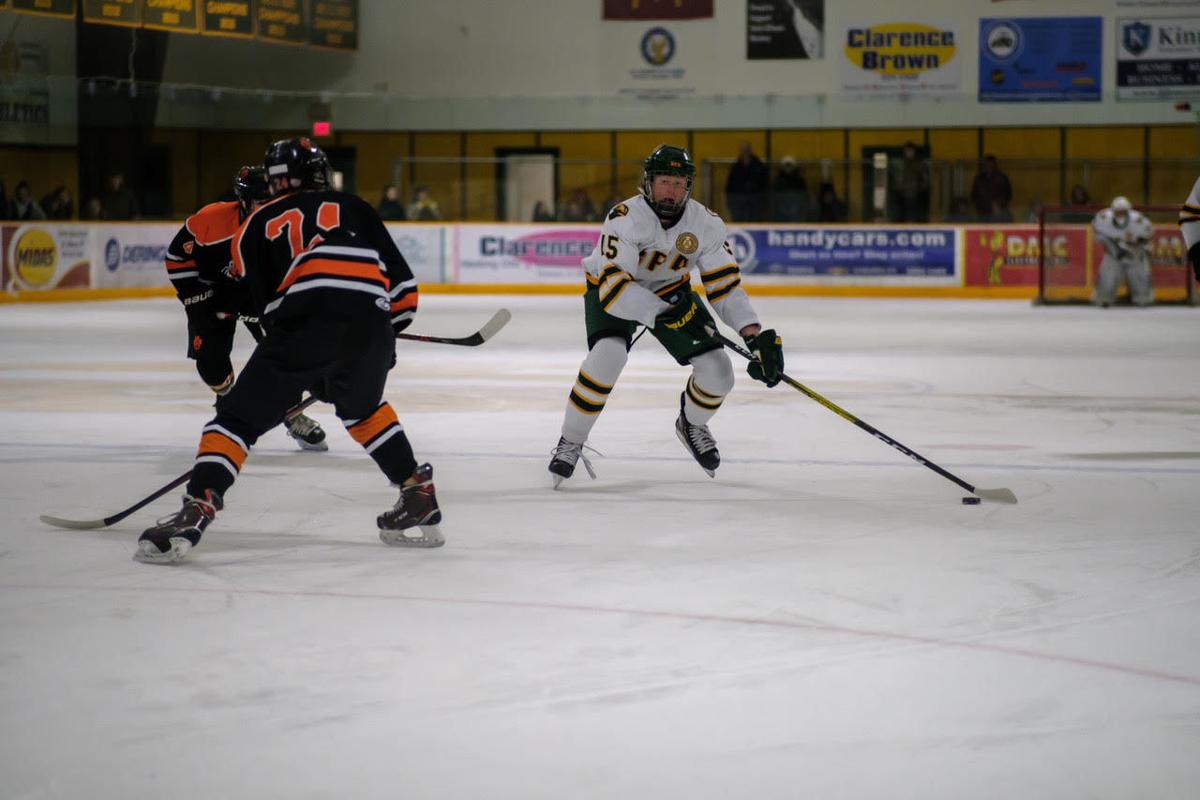 BFA’s Owen Benoit takes a shot on goal during the second period of Wednesday night’s game. 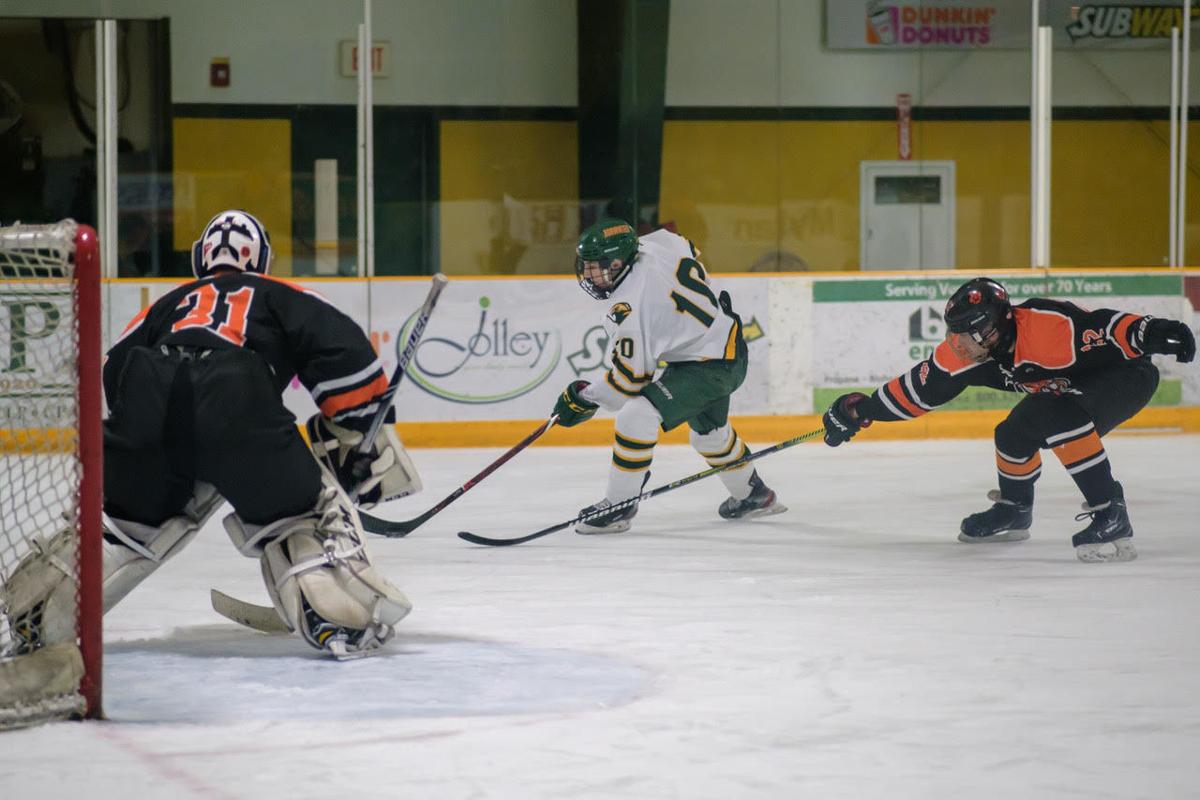 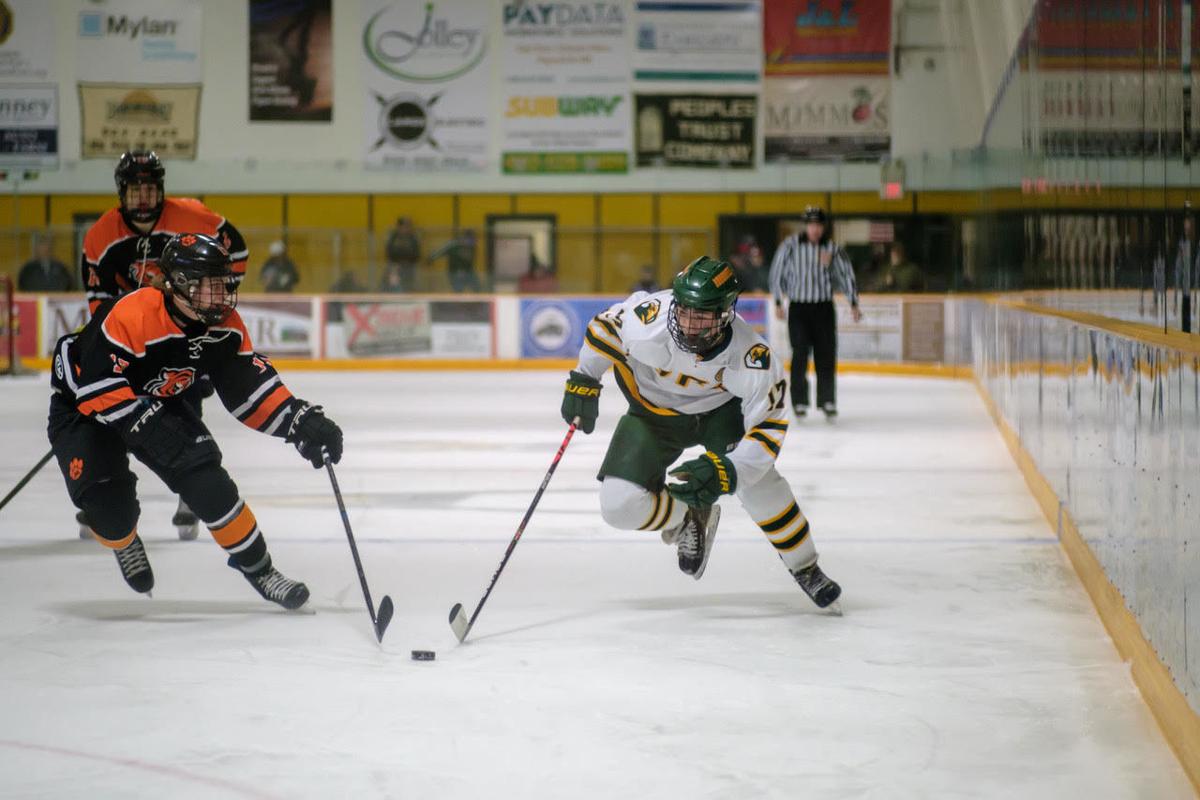 BFA’s Derek Nadeau brings the puck over the blue line for a scoring chance on Wednesday night. 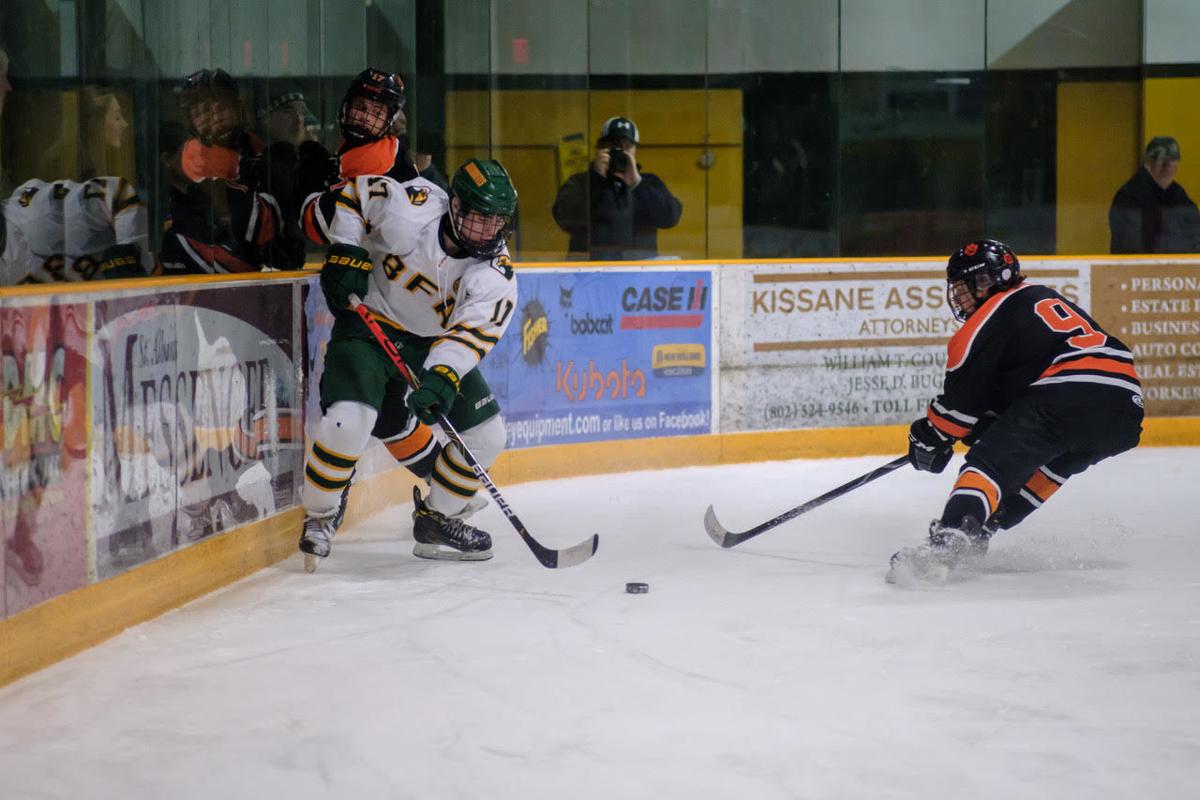 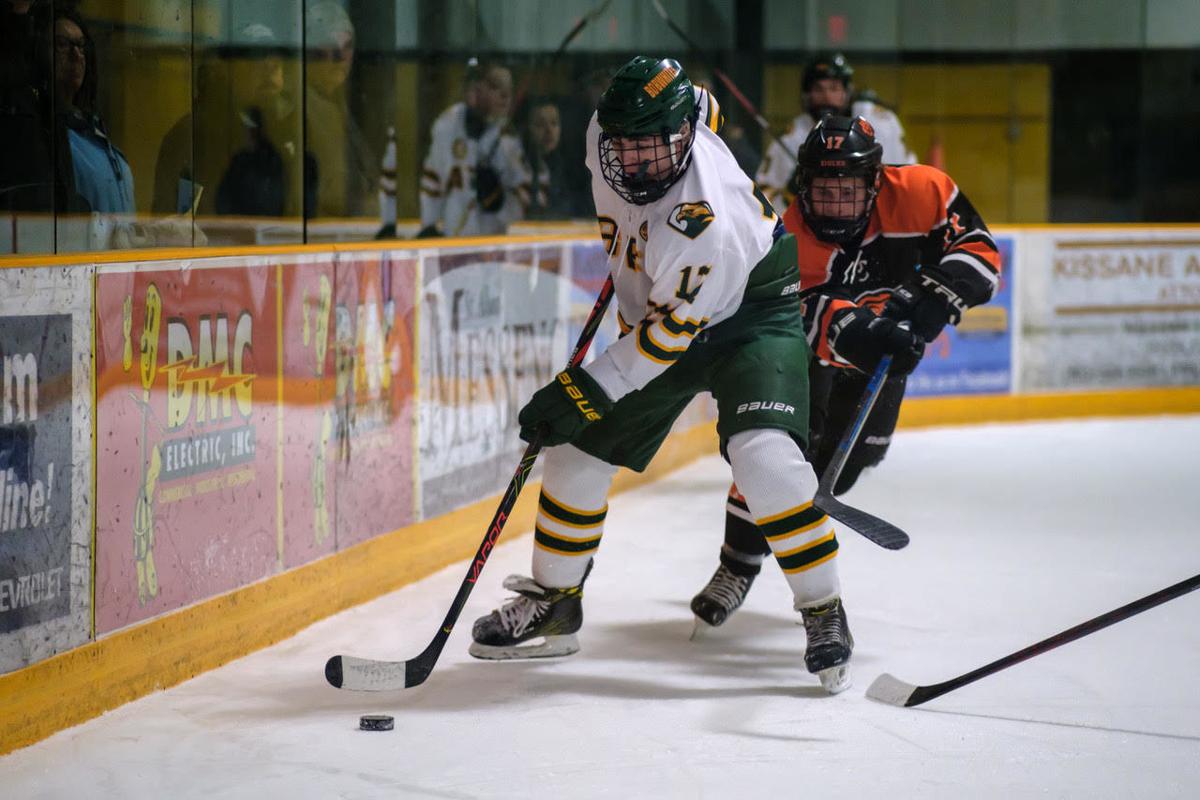 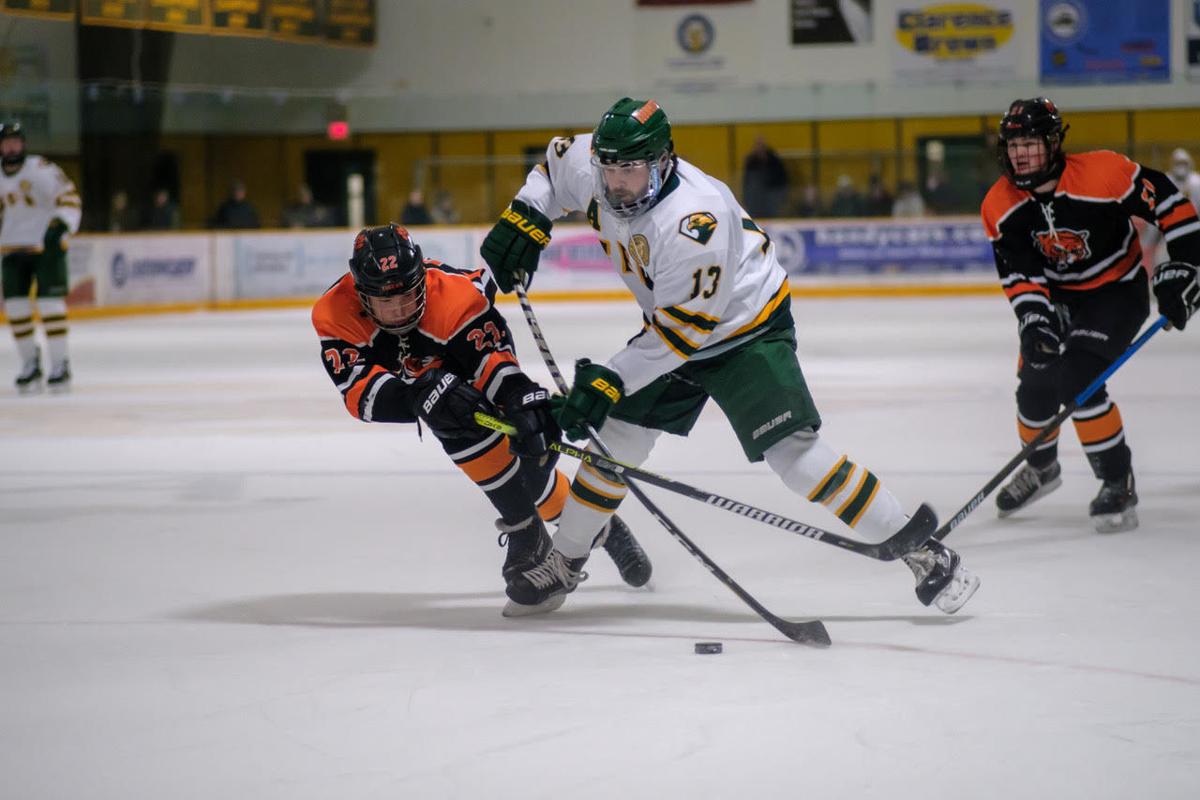 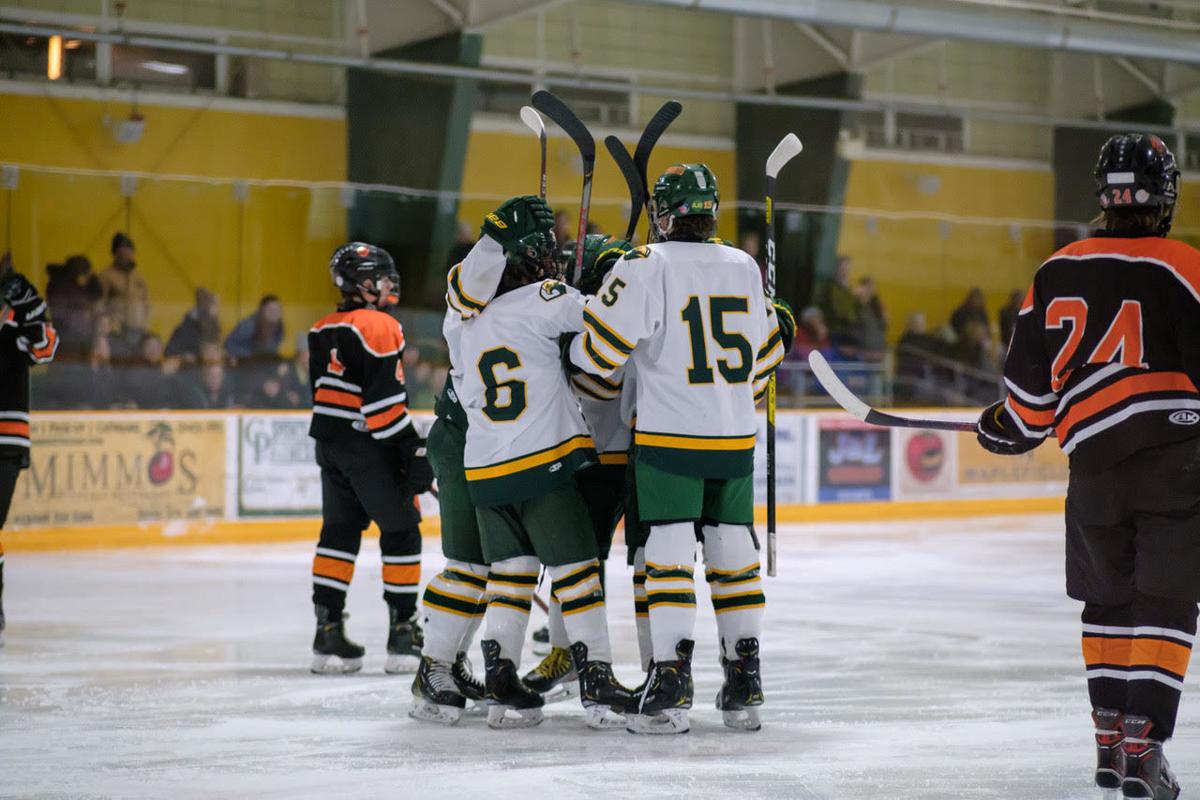 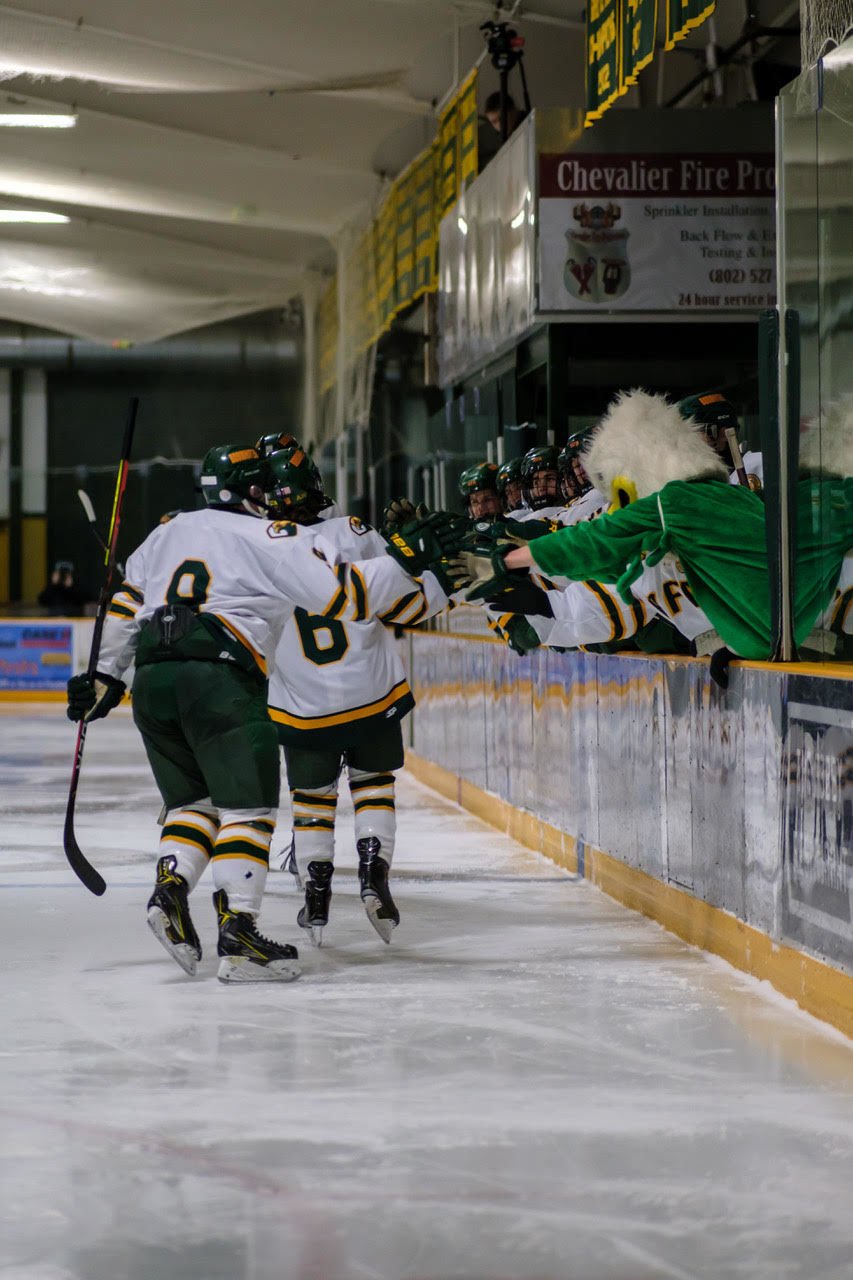 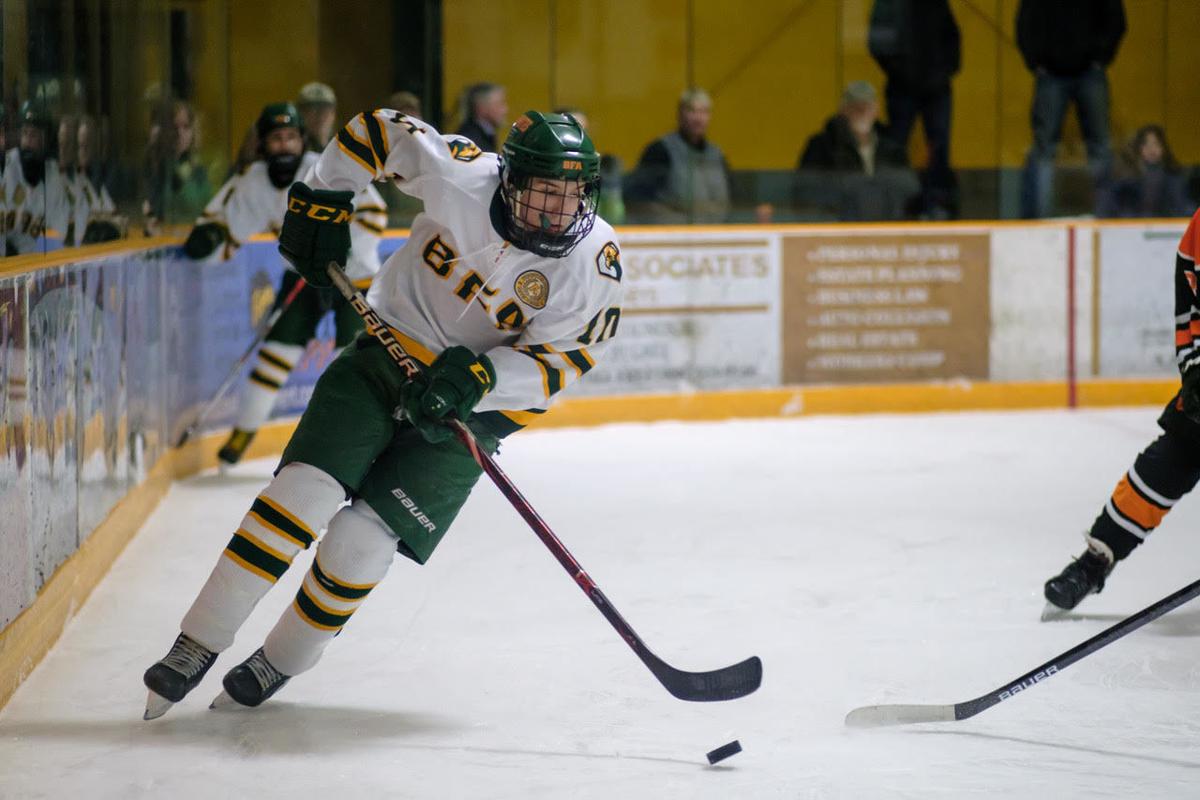 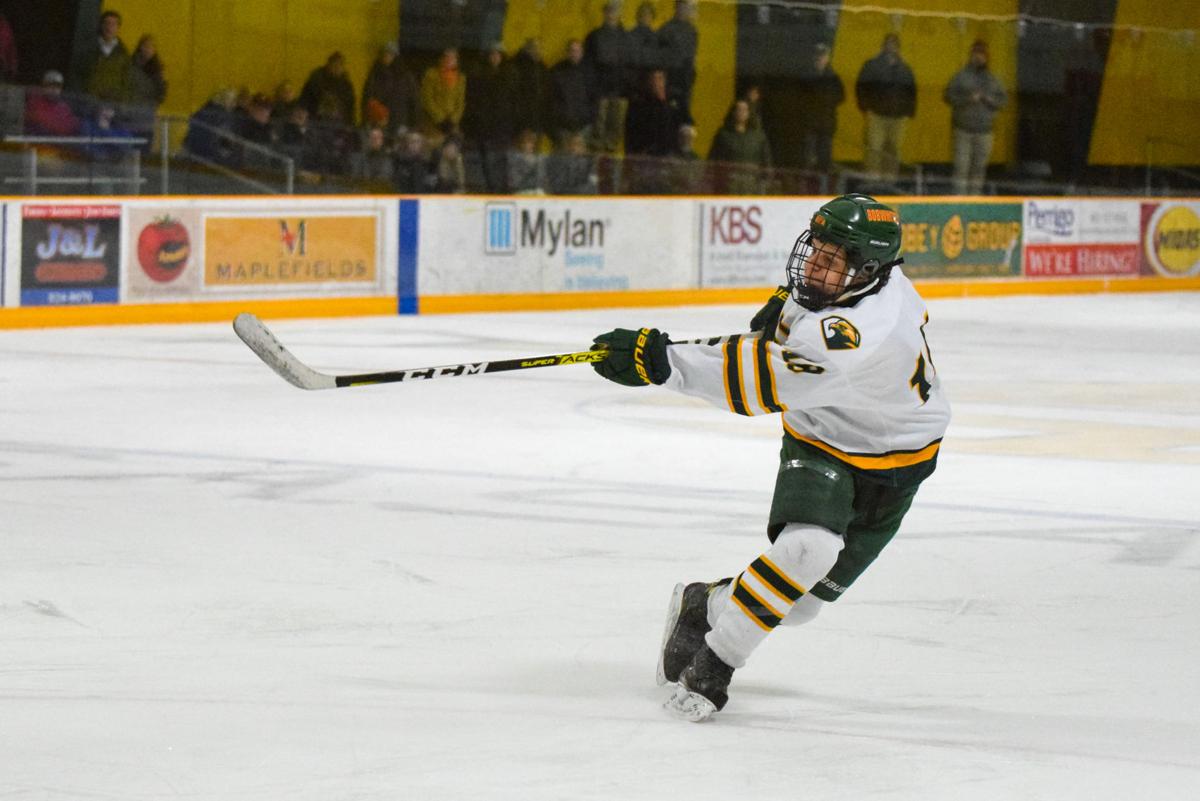 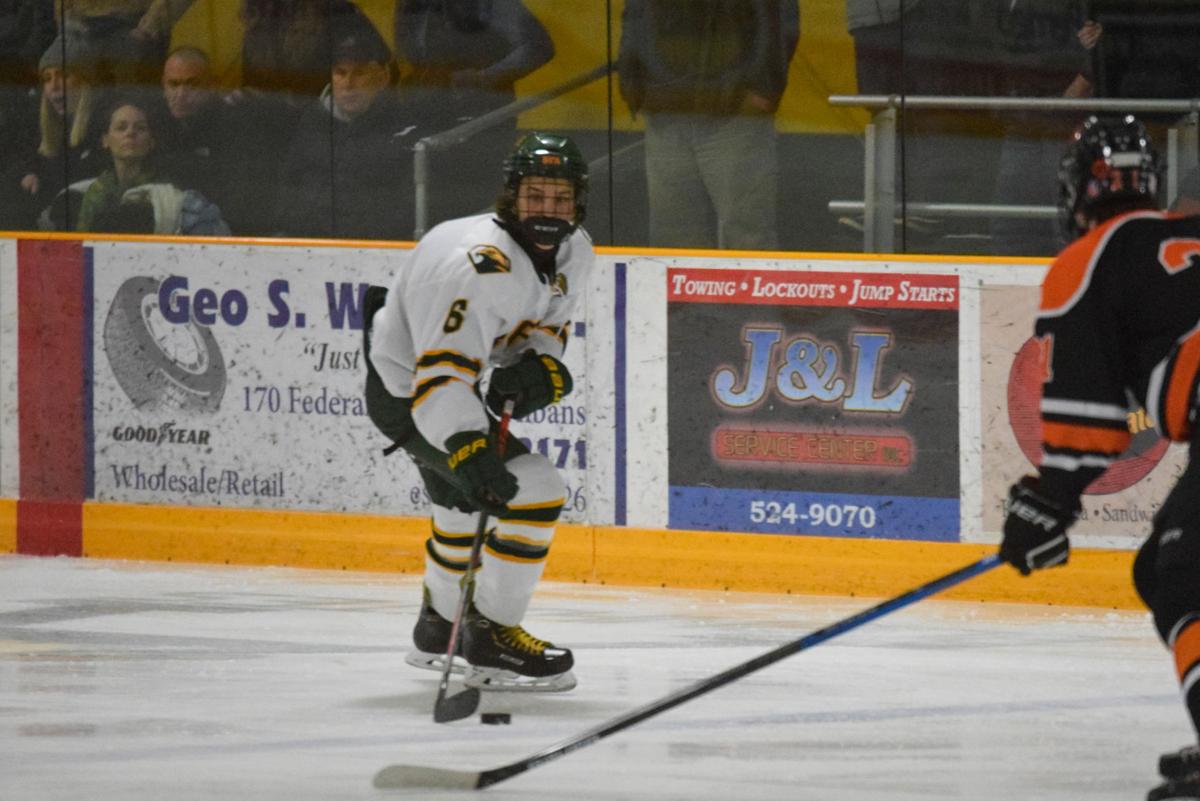 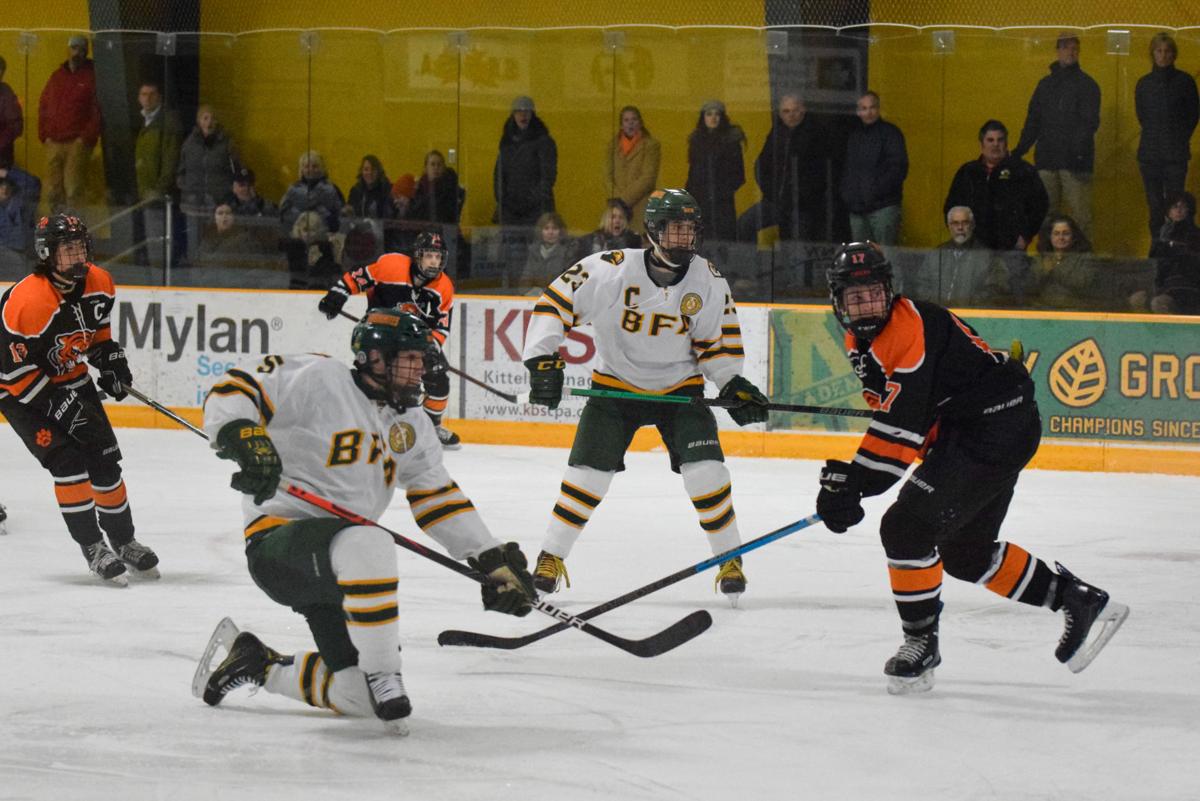 BFA’s Owen Benoit takes a shot on goal during the second period of Wednesday night’s game.

BFA’s Derek Nadeau brings the puck over the blue line for a scoring chance on Wednesday night.

ST. ALBANS — The BFA-St. Albans boys hockey team continued its roll Wednesday night when it hosted a stingy Middlebury team it had only beaten by one earlier this season.

Both teams battled throughout Wednesday’s contest, knotted at one late in the game. It was the Bobwhites’ special teams that proved to make the difference, as they killed a penalty midway through the third period and scored on a powerplay goal shortly after that proved to be the game-deciding goal on their way to a 3-1 victory, the team’s eighth win in a row.

“Middlebury is a hard-working team and a very good team,” said BFA coach Toby Ducolon. “It was a battle, and I thought that was one of our better finishes of the year. I don’t think we made many mistakes in that third period.”

With the score tied 1-1 midway through the third period, the Bobwhites had to work to kill off a slashing penalty before going on a powerplay of their own.

They didn’t waste the opportunity, as Dominic Liscinsky slid a pass across the blue line to Owen Benoit, who fired a low wristshot that found its way through traffic and inside the post and in for the 2-1 lead.

“Middlebury has a nice powerplay, so we did a nice job of shutting that down,” said Ducolon. “Then we got a chance to capitalize on our own powerplay; it was nice to see all of that tonight. It was nice patience from Dom instead of just shooting--getting a nice pass over to Benoit, and that was a nice shot from Owen, so all-around it was great execution.”

Less than a minute and a half later, BFA added some insurance. Christian Vallee carried the puck into the zone and passed over to Aiden Savoy who brought the puck toward the net. He flipped a pass to Sean Beaurgard in the slot, and he didn’t miss his chance burying a wrist shot to give the Bobwhites the 3-1 lead.

“Christian Vallee had maybe his best game of the winter tonight,” said Ducolon. “His group of him, Beaurgard, and Savoy had a solid game out there and that was a great play to get that third goal.”

After a quiet first period that ended scoreless, the Bobwhites found the scoreboard early in the second period. Matt Merrill picked up the puck deep in the Tigers’ zone and slipped a pass to the blue line to Ethan Audy. He let a shot go from the point that found its way through a screen and in to give the Bobwhites a 1-0 lead. It was Audy’s first varsity goal.

“Ethan had a nice goal and that was something we have been talking about--getting the puck back to our blue line,” said Ducolon. “We didn’t do that as well early on, but that was a good goal through a screen to get us on the board.”

BFA continued to put pressure on Middlebury throughout the period, but Zeke Hooper (20 saves) was solid in net for the Tigers keeping it a one-goal game.

The Tigers found their answer with just over two minutes to go in the second when they chipped the puck into the neutral zone and Ryan Nadeau picked it up got to the slot and wristed a shot past BFA goalie Seth Bushey (13 saves).

It was another solid effort by the Bobwhites who continued to find ways to win games even when they aren’t the flashiest of games.And they continue to find different people to contribute during their win streak.

“That’s just how we’ve been, that’s us where we don’t have that one player that will take over a game or a so-called superstar, so we need contributions from everyone,” said Ducolon. “Every line scored the other night against Stowe, and we are a pretty good team when we have everyone contributing like that.”

The Bobwhites improved to 13-3 and haven’t lost since a 2-0 defeat against Essex back on January 11. They will look to get a little redemption on Saturday when they travel to the first-place Hornets.

“We will have our hands full against Essex no doubt about that,” said Ducolon. “Hopefully they will have their hands full with us. I think we are a lot like Middlebury where we aren’t that fun to play against, so hopefully that will happen again on Saturday. I think they are more skilled than us, which is fine. We embrace the test, and it will be a good challenge for us to see where we are at with three weeks to go in the season.

“You have to be battle-ready when you play Essex, and I think playing Middlebury definitely will help us get ready for Saturday,” he added. “You don’t want to come in the game before Essex and beat a team soundly and form bad habits, so tonight was a good test and a good way to get ready for Saturday, and I’m looking forward to it.”