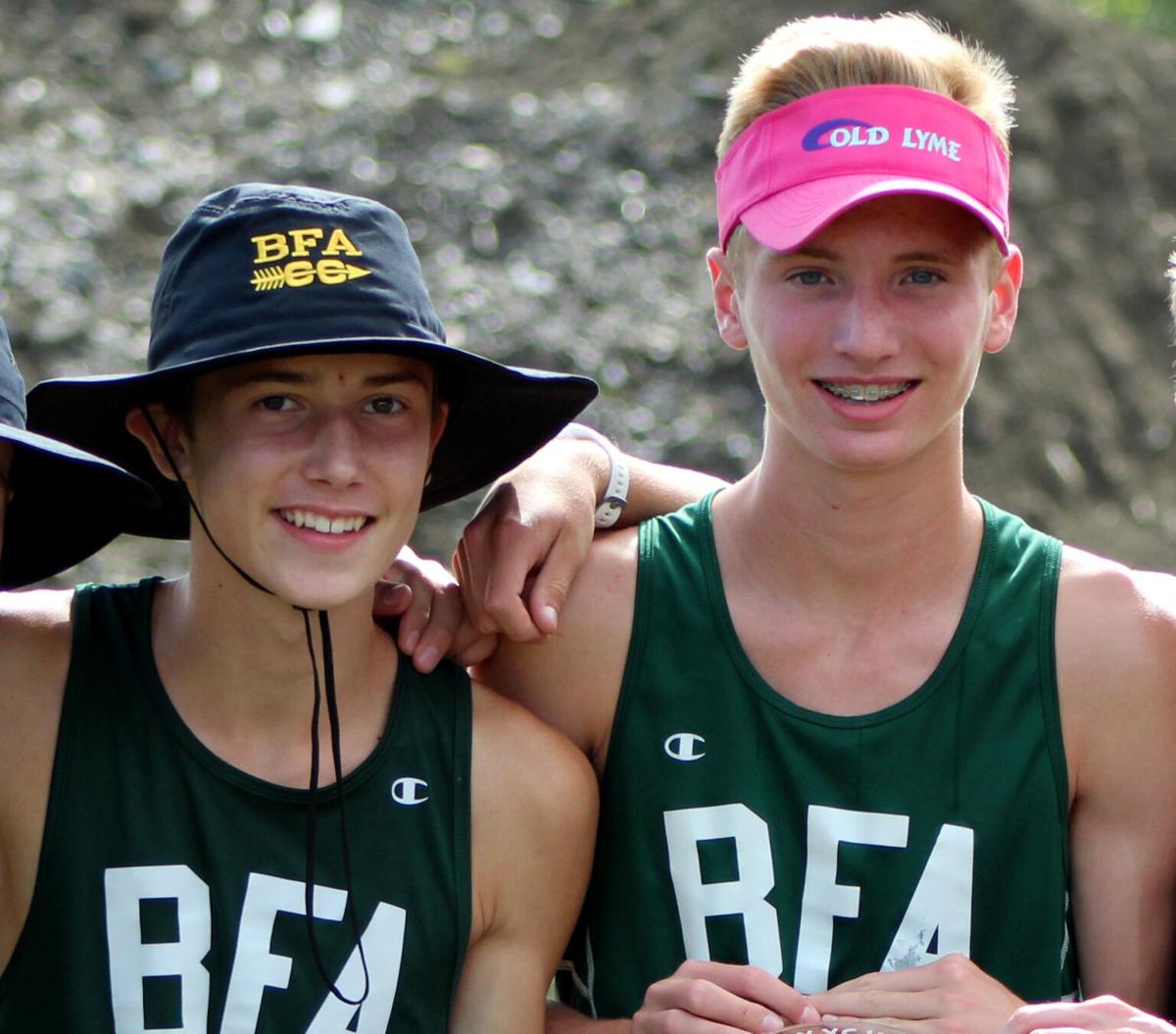 Calvin Storms and Ethan Mashtare during the 2019 cross country season. 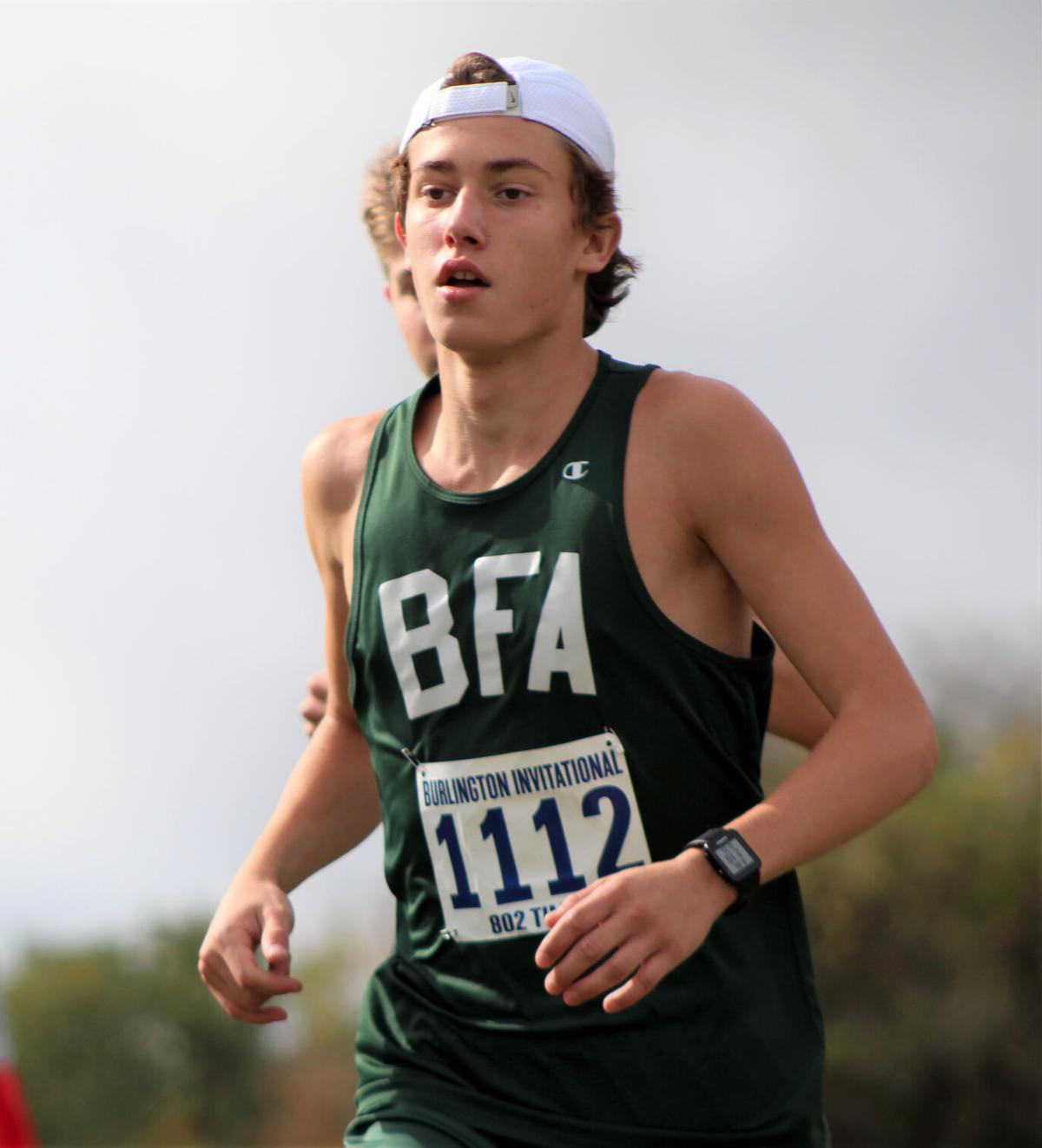 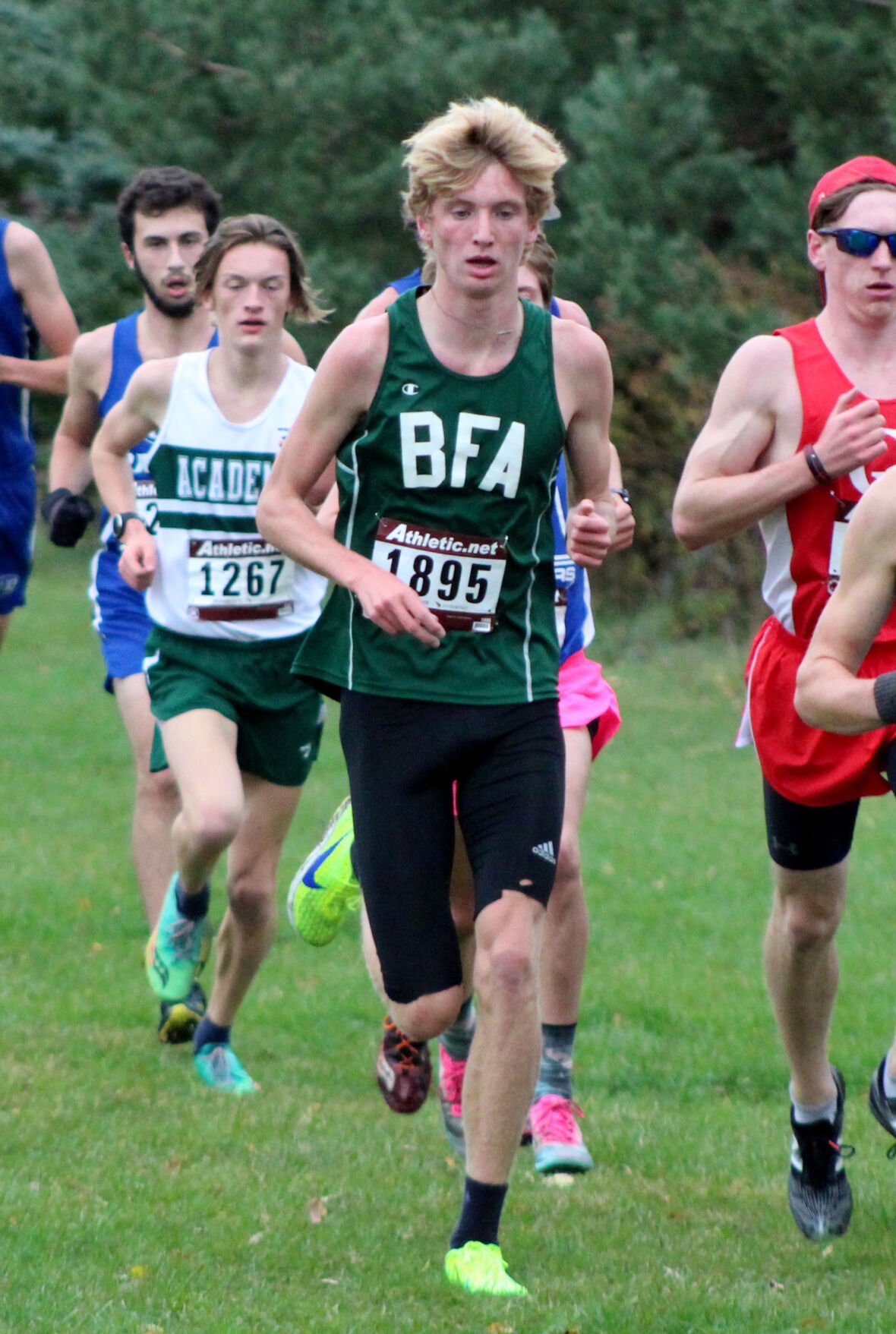 Ethan Mashtare racing in the fall of 2020. 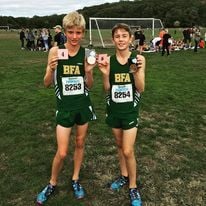 Ethan and Calvin display their medals after a race in New York at the Manhattan College Invitational. The boys were eighth graders at the time.

Calvin Storms and Ethan Mashtare during the 2019 cross country season.

Ethan Mashtare racing in the fall of 2020.

Ethan and Calvin display their medals after a race in New York at the Manhattan College Invitational. The boys were eighth graders at the time.

ST. ALBANS — BFA cross country runners Calvin Storms and Ethan Mashtare have been running together as teammates and opponents since the fifth grade.

On Saturday, at the state tournament in Thetford, the two athletes put up impressive numbers.

Mashtare and Storms made BFA history, both finishing in the top 10 in DI, the first BFA runners to do so in 40 years.

Mashtare finished fourth in a time of 17:24, ranking him third all-time among BFA runners who have raced at Thetford.

“Thetford is a challenging course. The first kilometer is downhill, and you can start out too fast.

“I paced with Ethan and Jacob (Tremblay), and we didn’t burn out our energy,” said Storms.

“At mile one, I was in tenth; over the next half mile, we climbed a hill to the start and finish line.”

Storms ran with a pack of runners pacing to finish in sixth to ninth place through the next section of the course.

Runners dropped behind him, and at one point, he was in fifth. By the 4K mark, Storms felt his legs begin to fatigue.

“I had a pretty fortunate day, finishing tenth. I was pulled along by Ethan; it was a tough race, but one to remember.

“It’s meant a lot to compete this season. We’ve been training since March when our track season was canceled,” said Storms.

“We were grateful to run a somewhat normal season. It felt good to race and know that all this work I put in has gone to something.”

Returning to race with his teammates was a source of gratitude for Storms.

“I thank all my teammates for training with me and motivating me to do my best. We’ve been putting in the hard work, and it’s good to see us doing well,” said Storms.

Through the challenges, the BFA cross country coaching staff has been a constant.

“My coaches have been a very influential part of my training--structure, strategies, things to improve on, looking to them for direction in practice, and in how to help out with the team,” said Storms.

“I thank them for all they’ve done this season and for being so dedicated to us to ensure we can do the best we can.”

Storms, a junior, has one more year to race; he shared what he loves about running.

“I enjoy the competition and that it’s an individual sport where I’m in complete control of my pace,” said Storms.

“I’ve been running with Ethan since elementary school. We’ve been competitors, and it’s great to run with him.”

Saturday’s race at Thetford was more than memorable for Ethan Mashtare.

“I’ve been dreaming of being up front with my team at states since I was in middle school. It’s good to be doing what I’ve dreamed of and seeing my team succeed,” said Mashtare.

“Calvin and I have been running together forever. We run together every day, every practice, every workout. It’s great to have him.”

Mashtare has learned to navigate the challenging Thetford course.

“It’s a fun course with a lot of different terrain--woods and fields. Morty’s Monster comes up in mile two; it’s a killer hill, but I use my long legs to propel down it!

“We’re really happy we were able to have some races in these hard times. It’s great that we’ve all been able to compete.”

Over the summer, the BFA cross country team had a visit with Elle Purrier.

“Elle was really inspirational. Running with a professional from Vermont motivated us,” said Mashtare.

“She talked with us about her training, which is much different than ours. She gave us a different view of the sport.”

“I love the team; they all push me every day, and they are probably one of the hardest working teams I’ve been on,” said Mashtare.

“They inspire me every day, and I hope I inspire them. It’s so good to see them succeed.”

As an upperclassman, Mashtare enjoys helping the younger runners.

“We’ve taken the freshmen under our wing, and their growth has been phenomenal. We pass things on to them that other upperclassmen passed on to us.”

Mashtare spoke about the opportunity to get on BFA’s all-time leaderboard.

“It feels good to get BFA back on top. It’s been a few years since we’ve been a top-caliber team. Comparing our names to some of the greats back in the day feels good,” said Mashtare.

He thanked his coaches for the contributions they’ve made to his success.

“I love the coaches; they’ve been there for us all year. I put up some bad races at the beginning of the year, and they encouraged me to keep my head up. I wouldn’t be where I was at States if it wasn’t for them.”

“It’s been an honor and joy to watch their growth and the friendship that binds them through running.

“Their dedication stands out; these two will look to do everything correctly to gain an edge--proper sleep, proper hydration, sticking to a training plan, asking questions to finetune, and being adaptable,” said Coach Mashtare.

“They really do enjoy training and racing, and it shows. Seeing things come together for both of them at the state championship this year was fun to watch and a true joy!”

Runners like Mashtare, Storms, and former 2020 Athletes of the Week Jacob Tremblay and Loghan Hughes bring enthusiasm to the program.

“Records are meant to be broken, and it’s nice to have some new athletes who are striving to break those records,” said Mashtare.

“They are extremely proud to wear BFA across their chest.”

"Records are meant to be broken, and it's nice to have some new athletes who are striving to break those records."