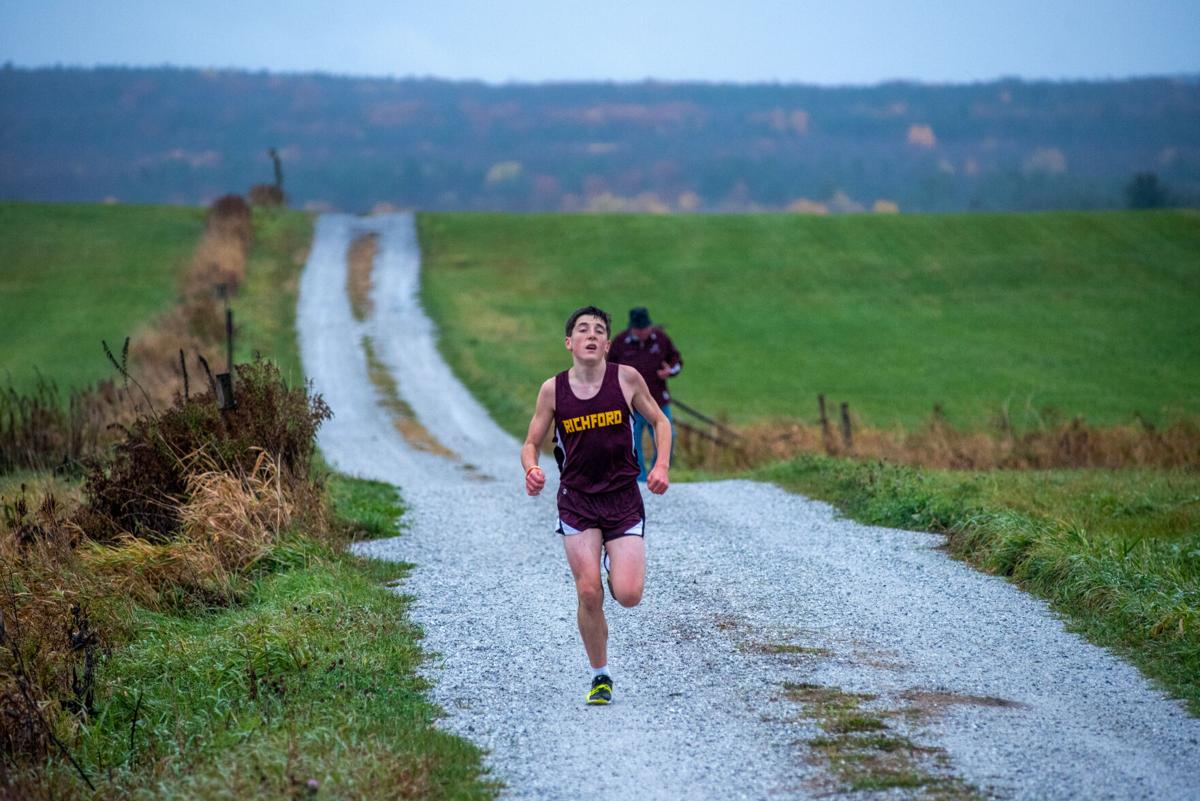 John Viens runs for a PR at the Choiniere Family Farm this fall. Richard Flint, coach of the Richford cross country team, walks behind him. 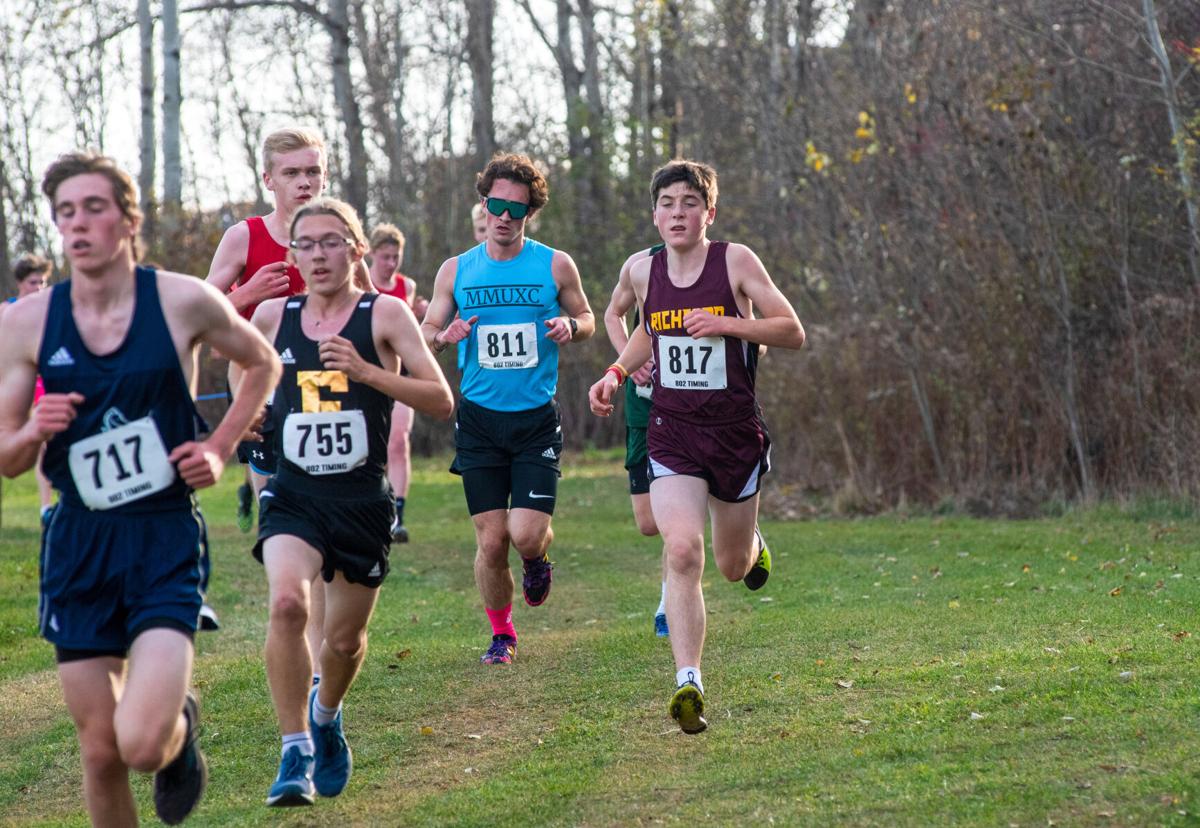 John Viens, far right, races at Hard’ack in the Race of Champions on Saturday, November 7.

John Viens runs for a PR at the Choiniere Family Farm this fall. Richard Flint, coach of the Richford cross country team, walks behind him.

John Viens, far right, races at Hard’ack in the Race of Champions on Saturday, November 7.

RICHFORD — Sophomore cross country runner John Viens of Richford garnered attention this fall as he lowered his times dramatically from last season in the 5,000-meter race.

This year, Viens still participated in both sports but focused more attention on running.

“He’s a great kid, a great athlete, and a great leader. He’s one of those kids every coach wants to coach.”

Flint noted that last year, Viens consistently ran the 5,000-meter race in roughly 22 minutes. This season, he hit a 17:55 in a race with MVU.

“I thought he ran a really good race on Saturday. Like he said, he got to see some competition he hadn’t seen before,” said Flint.

“Athletes that start to shine, like John, help Richford. I’ve got an eighth-grader who wants to run because John is running. The kids get all excited when he does well.

“John’s the kind of kid that is going to give you everything he’s got. He listens well, and he does what he needs to do before a race--working on his stride. He’s always trying to get better.

“He’s got some goals, and I hope he sees them come true.”

John and his brother Luke both run for Flint.

“He and his brother are inseparable, and they’re a great team. His brother Luke has given his support the whole way,” said Flint.

After trying the sport in the fall of 2019, Veins spent the summer of 2020, improving his skill.

“When I was training this fall, I felt faster than the year before. It wasn’t until after the first MVU meet where I ran an 18:37, that I knew how much faster I was,” said Veins.

“I was surprised; my work really paid off.”

Veins earned his fastest time at the Choiniere Family Farm’s course, a place he enjoys racing.

“I like how open it is and how you can see the whole course, and I love how it cuts into the woods. I also love that it’s a loop,” said Veins.

Veins also enjoyed states and the Race of Champions.

“At the state meet, I was trying to stay up with the good runners. It helps to run with the faster runners,” said Veins.

Veins noted that the push up Morty’s Monster, the large hill at the Thetford course, left him tired after pushing the pace with faster racers.

“I had something left at the end, and I kept fifth place in DIII.”

A week later, Veins competed in the Race of Champions, an event that replaced New England’s, which had been canceled due to COVID.

Veins had noticed at states that he’d started a little too fast, leaving him tired later in the race. He set out to correct that at Hard’ack.

“I started slower and kicked it up at the end. I know, now, I could have started more quickly.”

Veins finished third in DIII at the Race of Champions, a two-place improvement on his state finish. He was 43rd out of 98 runners in all divisions.

“I was a little disappointed I didn’t PR, but I was pleased with how well I placed,” said Veins.

“I’m glad my brother Luke has continued to run with me. As a team, we all get along well; we love each other and cheer for each other,” said Veins.

Veins is inspired by his coach, Richard Flint, and by another outstanding Richford runner.

“All the coaches come up to Richard and talk about Elle. It’s inspirational to know that she came from Richford and became so good,” said Veins.

“Richard (Flint) was a really good runner, and I listen to him when he’s telling me to push. I know he’s going to make me better!”

Veins, who is looking forward to next season, was grateful for this one.

“It was a unique season, especially in the beginning, when we were only running with our team,” said Viens.

Veins already has goals for the 2021 season.

“I’m looking forward to possibly getting into the 17s regularly. I want to make New England’s next season.”

Veins has a true love for running, and his enthusiasm is easy to see.

“I love the feeling after a run; it’s so fulfilling--especially when I get a PR. It gets me so pumped up!”

"He's a great kid, a great athlete, and a great leader. He's one of those kids every coach wants to coach."