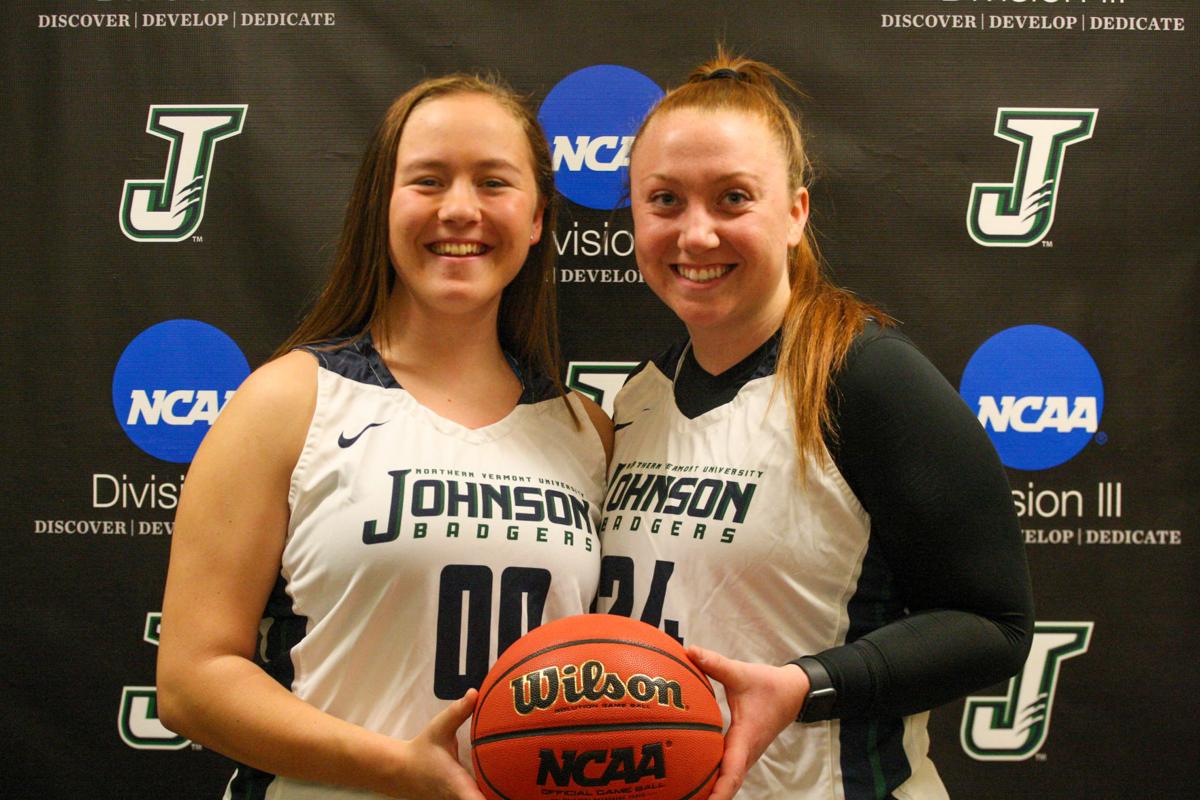 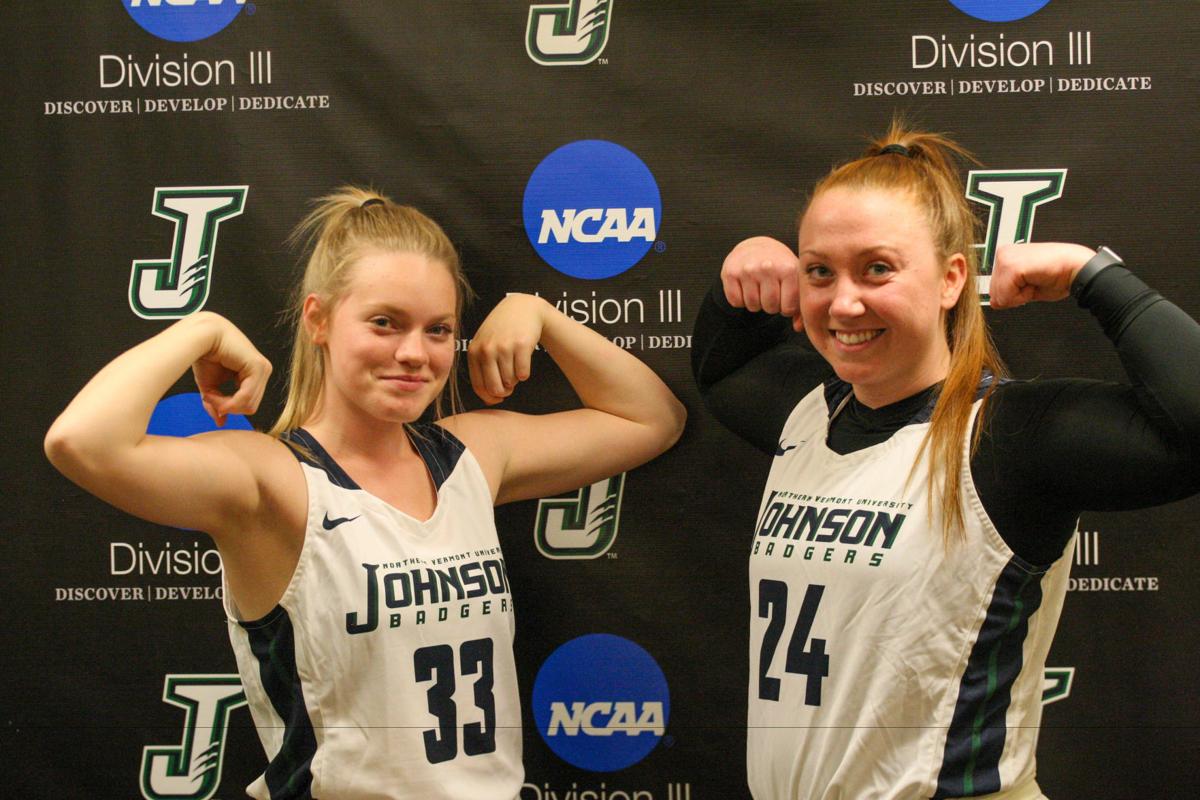 Klaire Ware, on the right, Kiana Johnson pose for a picture during the 2019-2020 basketball season at Northern Vermont University--Johnson. 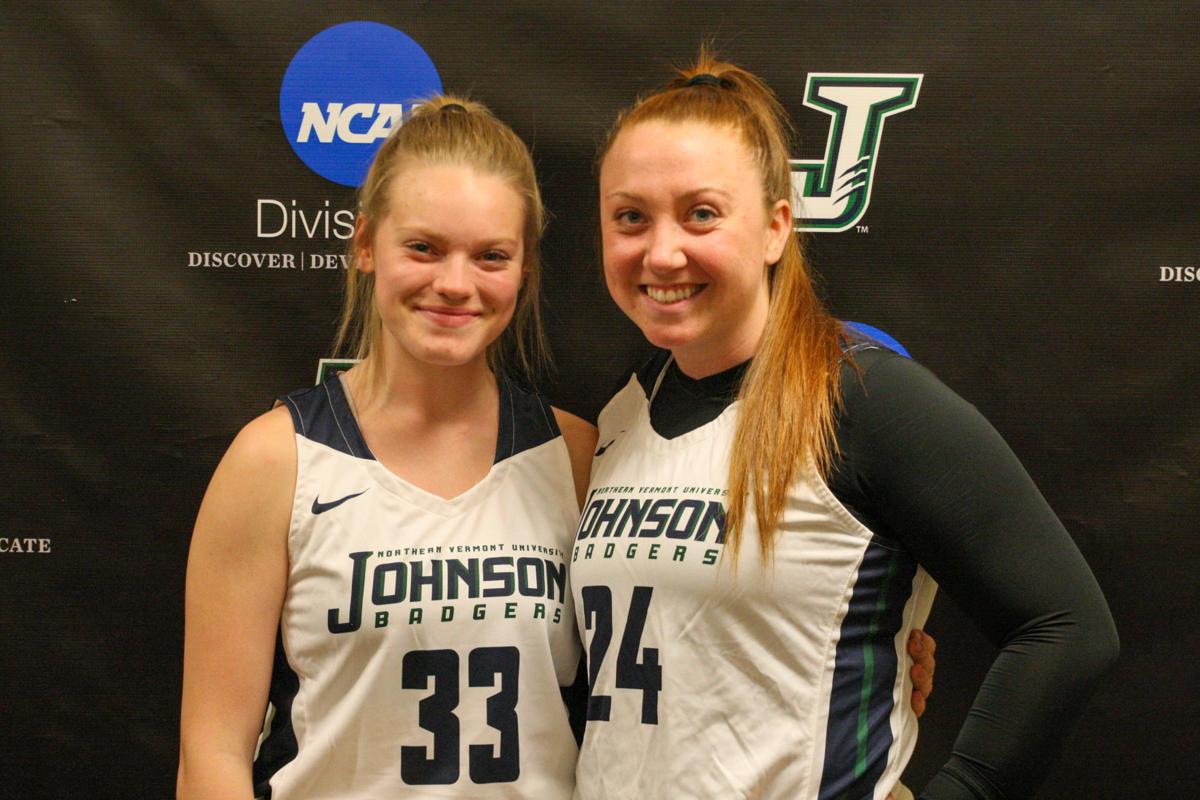 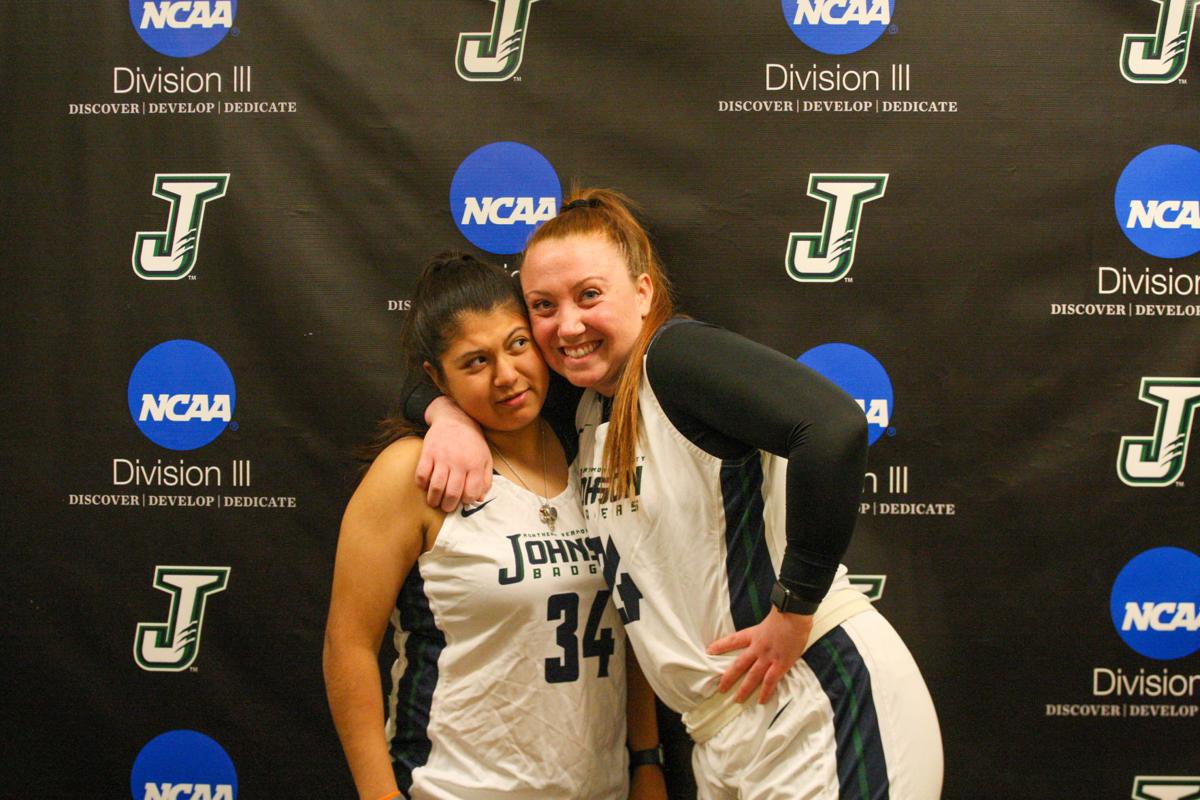 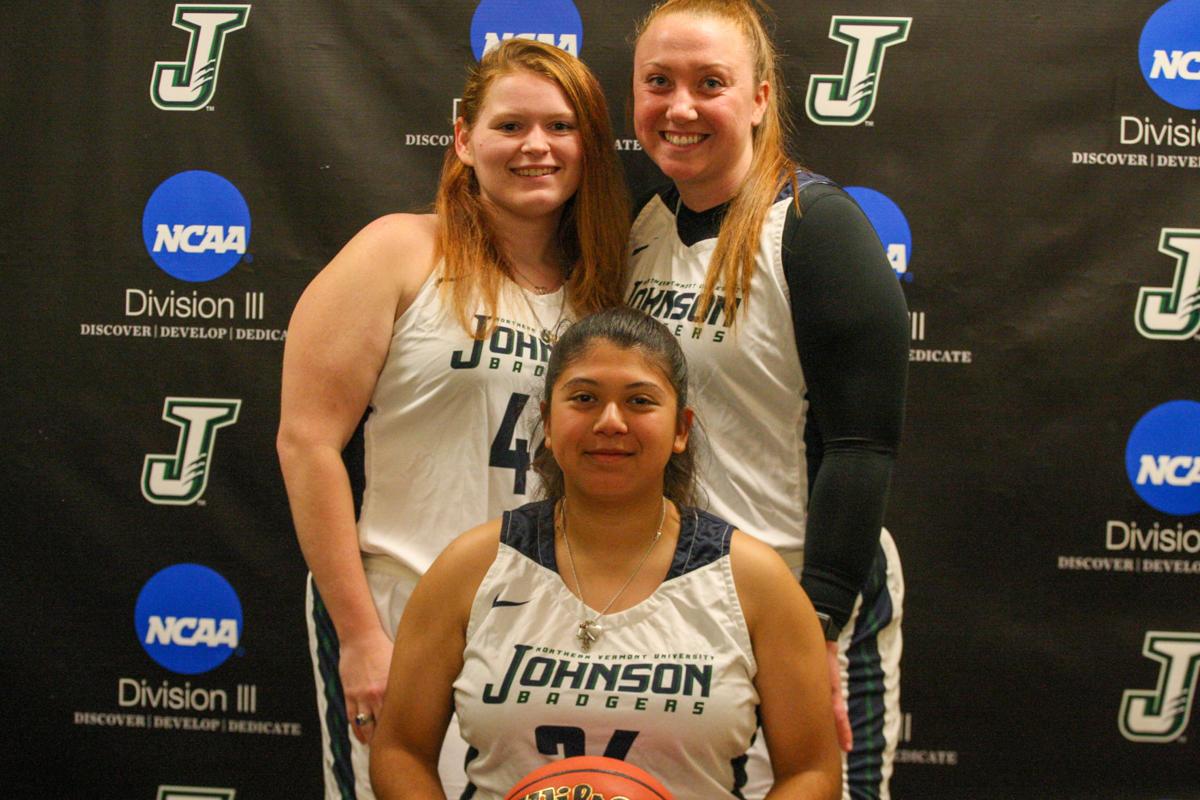 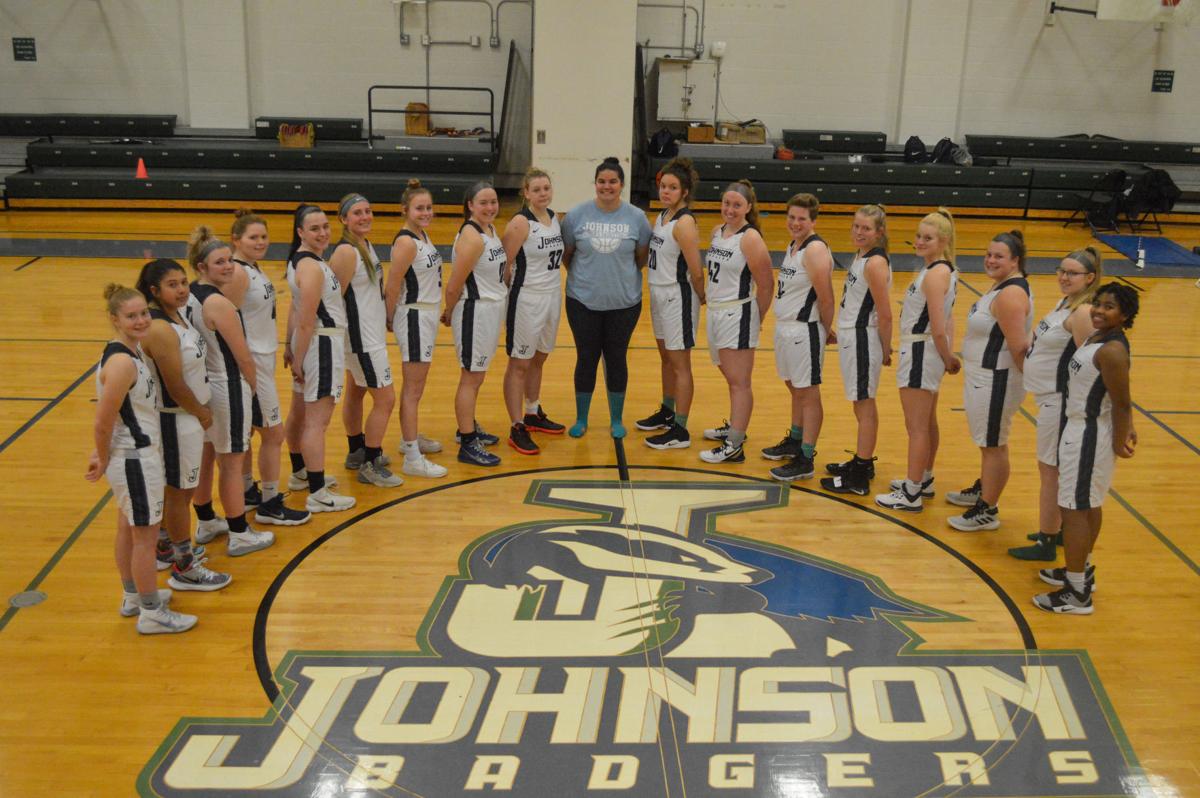 The NVU-Johnson women’s basketball team poses on their home court. Klaire Ware (number 42) transferred to Johnson for the 2019-2020 basketball season. 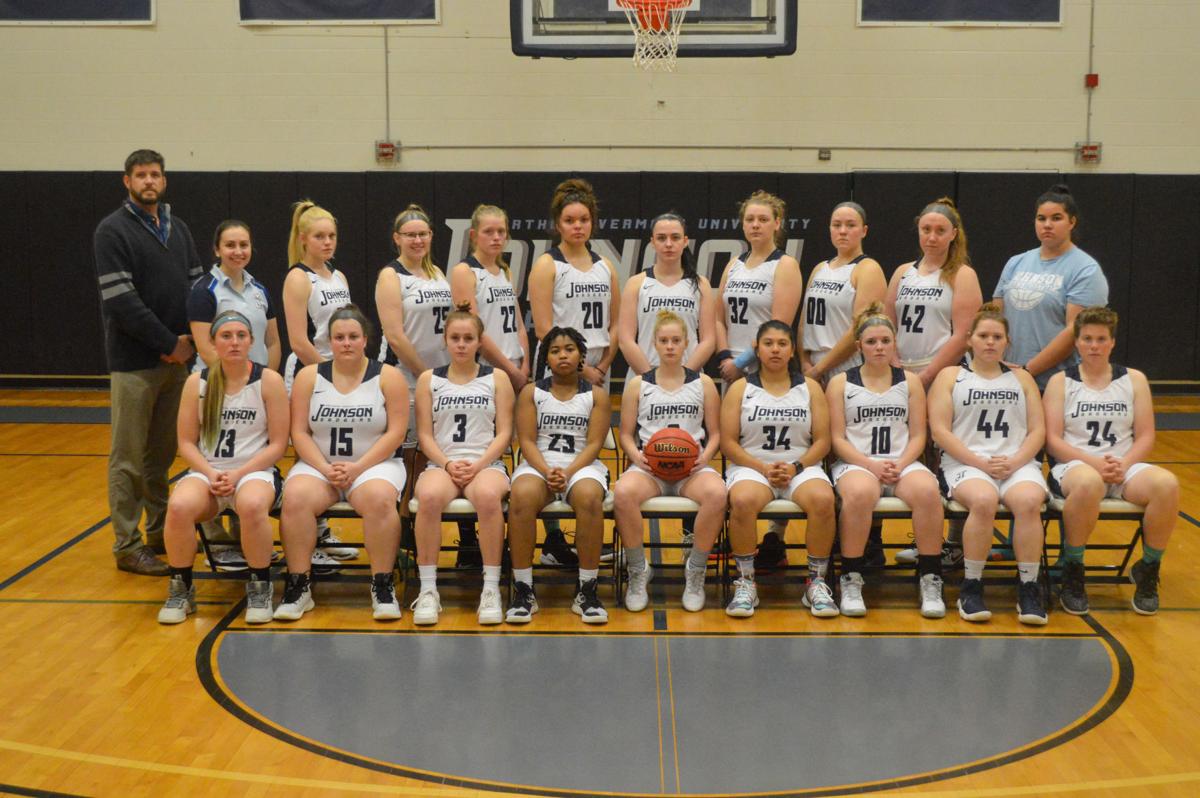 Klaire Ware, on the right, Kiana Johnson pose for a picture during the 2019-2020 basketball season at Northern Vermont University--Johnson.

The NVU-Johnson women’s basketball team poses on their home court. Klaire Ware (number 42) transferred to Johnson for the 2019-2020 basketball season.

JOHNSON/FAIRFAX — Klaire Ware is loving life in her home state, playing the game she loves and growing with her basketball family at Northern Vermont University-Johnson.

Coming to Johnson brought Ware right where she needed to be, even if it took some extra time to get there.

Ware, a 2018 graduate of BFA Fairfax, spread her wings and headed to Plymouth State College where she joined the basketball team, but she decided to return home in February.

“I came home and planned on working and figuring out what I wanted to do. I enrolled at CCV, and I was thinking about attending UVM.”

After settling at home, Ware attended a BFA Fairfax basketball game to cheer on her former team.

“The Johnson girls’ basketball coach, Greg Eckman, was recruiting at that game,” said Ware. “I talked to him, and he really listened and understood where I was coming from.”

“All the things I wanted to move away from--to spread my wings--are now the things I love at Johnson,” said Ware.

“There is so much support at Johnson. I didn’t even know that was what I needed, but it’s been so good.”

During her first year at the college, Ware has already been able to make an impact in the ways she enjoys most.

“The leadership role I have on this team fits me well. I get to encourage the players and help guide the freshmen,” said Ware.

“I love being a leader on the team and supporting the girls. We’ve got girls from Montana, Maryland, and Texas along with local girls.

“Some of those girls don’t get to go home. I bring them back to my house and they hang out with my mom,” said Ware with a smile.

Recently, Ware was able to help organize a White Out game at Johnson.

“We had a home opener, and I wanted to make it fun!”

The game proved to be a success. Ware was the leading scorer and the gym was full of energy.

When it comes to court time, Ware has had the opportunity to play.

“It’s nice to be back in the games, shooting threes, and hearing the crowd behind me.”

Playing in-state has allowed Ware to play against some of her formidable high school opponents.

“We played Castleton recently at a tournament in Barre, and I was guarding Emilee Bose again!” said Ware.

Having the opportunity to play at the Barre Auditorium, something she never did in high school, was also sweet.

“I was glad that I finally got to play there, and that’s something I’d never have done if I’d been out of state.”

Ware has also been able to help grow the Johnson girls’ basketball team.

“I love to do instate recruiting. I enjoy talking to people, and there are a lot of girls who know me and played against me in high school,” said Ware.

“We’re really building something good here at Johnson, and I want to share that.”

Ware has also enjoyed helping to grow basketball in Vermont through the Johnson basketball camp.

“I attended the Johnson basketball camps as a kid,” said Ware. “This year I coached at the camp. There were around 100 kids compared to the 20 who attended when it began.”

“I met Klaire after her 7th grade year when she came out for basketball camp,” said Eckman.

“Klaire is very passionate and driven; she’s very selfless and positive. It was those qualities that made her great to recruit through high school.”

“She sets goals and works to accomplish them,” said Eckman. “It’s fun to be around individuals who have ideas of where they want to be in life!

Eckman was glad to see Ware join the other players on his team.

“We have some other players who are outgoing and encouraging. She was a great fit with the team--part of a consortium basketball players.”

“Klaire is a leader, and she’s astute to her teammate’s feelings. She knows who needs to be challenged, encouraged, or joked with.”

This year’s Johnson team is comprised of eight freshmen, four sophomores, two juniors, and one senior.

“We are on the very young side, and it’s nice to have a sophomore year player to help guide that young group through.”

“Klaire isn’t about taking control; for her, it’s about ‘how can I fit in and use my confidence to help this group out.’”

“Whether it’s coordinating a special event like the White Out game or helping with film study and scouting reports, she likes to be around and participate in so many ways,” said Eckman.

Eckman hasn’t been the least bit surprised by the wonderful qualities he’s seen in Ware.

“I love Fairfax athletes. From the time they are in youth sports, they have great coaches and passionate parents who are always developing their youth.

“At the high school level, they are prepared to go at all levels. They are student-athletes who can move on because of the lessons that they’ve learned in their youth programs.

“I’ve been impressed with every aspect of youth sports in Fairfax,” said Eckman. “It’s an unbelievable community.”