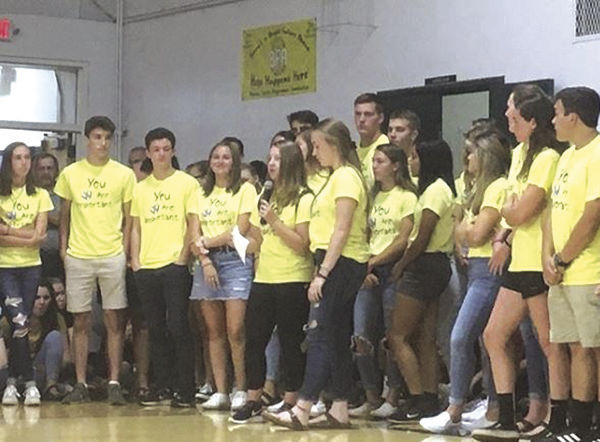 Hope Happens Here is a mental health organization that was founded in 2015 at St. Michael’s College in Vermont. The organization has multiple chapters in colleges and universities across the country and in high schools across Vermont. It is a student-led movement that focuses on ending the stigma around mental health and promoting mental health awareness throughout campuses, specifically in student-athletes.

The reason that Hope Happens Here is geared toward student-athletes is because they are disproportionately affected by mental health problems. According to athletesforhope.com, “33% of all college students experience significant symptoms of depression, anxiety or other mental health conditions. Among that group, 30% seek help. But of college athletes with mental health conditions, only 10% do.” This is a result of pressure not only due to their responsibilities as a student but of pressure to perform in practices, games and in front of the public eye.

According to Mary Brouillette, BFA business teacher, coach and Hope Happens Here advisor, “[as an athlete] you’re told to suck it up, or you’re worried about playing time if you say I’m not feeling well today, whereas when I sprained my ankle, it’s very easy for me to say I’m going to sit out today, and everyone gets it.”

For more from the Mercury

This reveals the toll that coping with one’s mind while also being expected to physically perform takes on student-athletes, and why organizations like Hope Happens Here are important. BFA student-athlete Loghan Hughes (‘22) said, “I’ve seen what mental health can do to your athletic performance, and also how you engage with your friends on a team, and I think it’s a really important thing to bring attention to.” For this reason, Hope Happens Here stresses that when someone is going through something mentally, it should be treated the same way as a visible injury, such as a broken bone or a torn ligament.

Bellows Free Academy took to this message, and the school’s Hope Happens Here chapter was born. The group bears the slogan “You Are Important” paired with a purple heart outlining outreaching hands to represent the organization, which has been placed on bright-yellow shirts. The BFA chapter also adopted St. Michael’s slogan, “It’s ok not to be ok.”

BFA’s Hope Happens Here chapter has had success in the group’s efforts to spread awareness, and the chapter was recognized for its work by the Vermont National Education Association. The group received the VT-NEA Human and Civil Rights Award for 2020 for their continuous, active role in the BFA community.

Hope Happens Here has shown its impact from a small scale, such as informational cards, to sponsored events at the collegiate level. It carries a message that has trickled down from student-athletes at universities of thousands to small Vermont high schools. However, no matter the place, it upholds crucial elements of its message.

Hughes said it best: “[There are] people who want to support you out there, even if you feel like you’re alone in it. If it’s something you can’t talk about, there’s a group of people that do want to talk about it with you or are there for you.”