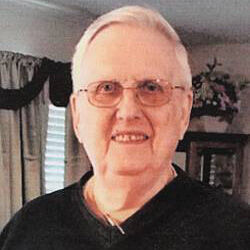 ST. ALBANS, VT/FAIRFAX, VA – Ronald Clarence Lemnah has passed over into the arms of God, after a short illness.

Born in St. Albans, he was the son of the late Clarence G. and Etta (Erwin) Lemnah.

Ron moved to Washington, D.C., and then to Virginia, after graduating from BFA St. Albans in 1956. He was a dance instructor for Fred Astaire Studios; a design landscaper and then computer programming for the Naval Discharge Review Board.

Ron got to work alongside his brother, MSGT Richard L. Lemnah, for a few years. The plan was for the Lemnah Brothers to go into the computer business, together upon Richard’s retirement from the U.S. Marine Corps. Things changed when Richard was KIA in Beirut, Lebanon, the bombing of barracks on October 23, 1983.

Ron was a U.S. Navy Seabee Reserves called to active duty during the Cuban Crises. He remained in the reserves, going active duty again, for the government at the Naval Discharge Review Board. He retired after 20 years, having served his country, proudly. He was a longtime member of the American Legion in Virginia.

He belonged to the St. Ambrose Catholic Church in Annandale Va., a devout Catholic, he also belonged to Legion of Mary (27 years) praying the rosary daily, especially in front of abortion clinics. He held many offices with the Legion of Mary.

Ron was a family man and enjoyed returning to St Albans twice a year; once in the summer and again at the holidays. He enjoyed the jokes and laughter with friends and family, and he was able to watch the babies grow into loving young people.

Survivors include his brother, Robert Lemnah and his wife, Sandra, of Burlington and two sisters-in-law, Marlys Lemnah and Reba Lemnah both of St. Albans, as well as several nieces and nephews.

A Mass of Christian Burial will be celebrated on Friday, June 12, 2020, at 11:00 a.m. at Holy Angels Catholic Church, 245 Lake Street, St. Albans with Monsignor Peter Routhier as celebrant. Prayers of committal and military honors will follow in Holy Cross Cemetery.

The protocol for social distancing will be observed. Attendees will be required to have a face mask and follow the directions of the ushers.

Those planning an expression of sympathy are asked to consider the University of Vermont Children’s Hospital, 111 Colchester Avenue, Burlington, Vermont 05401.

To send the Lemnah family a message of condolence or share a memory, kindly go to Ron’s online guestbook at www.healdfuneralhome.com.