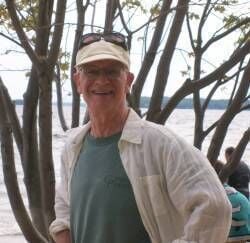 ST. ALBANS — Honorable Robert P. Cronin, a longtime area resident and former Franklin County Probate Judge, passed away Wednesday, May 12th, 2021, at home with his loving family and friends at his side.

Born in Burlington on October 22nd, 1944, he was the son of the late William Charles and Marion (Lynch) Cronin. Bob was 76 years old.

On December 5, 1992 on Block Island in Rhode Island, he married Ruth Vincent Brady who survives him.

Bob graduated from Richmond High School in 1962 where he played soccer, basketball and baseball. He attended the University of Vermont where he played baseball for four more years. At UVM Bob was a member of Kappa Sigma fraternity. He received the Seman’s Trophy, which is presented to the senior athlete who has demonstrated a high level of athletic achievement and earned the respect and regard of his/her fellow students for leadership, loyalty and service to the university. He graduated in 1966. Bob then went onto Boston College, where he received a law degree. Following this Bob went on to receive a specialized degree in Corporate Tax law at Boston University.

Locally Bob practiced law for many years with Kissane, Yarnell and Cronin (now Kissane Associates) before being elected and appointed Franklin County Probate Judge in 1993. He served on the Franklin-Lamoille Bank Board, CVAA Board (now Age Well), was an AARP volunteer tax preparer and volunteered for many years at the St. Albans Free Library. Bob also served in the Vermont Army National Guard.

Bob was an incredible athlete. For many years he played in baseball and softball leagues. He coached little league baseball and was assistant coach of the BFA high school girl’s tennis team. In addition to his love of baseball, he played tennis, including USTA league tennis for many years. These tournaments included traveling all over New England to play. He also played golf. He kept strong and fit by working out at the CPSC gym for many years.

Bob loved music. He had a large record collection that he kept catalogued (before Google) so that he could cross reference and find the songs he wanted quickly. He played many different instruments. He enjoyed playing in the Citizens Band and also in the First Baptist Church bell choir. He taught himself to play the piano. It was a joy to hear his music throughout the house.

Bob is also survived by his in-laws, William Vincent, Sr. and Beverly A. Vincent both of Enosburg, brother-in-law, William Vincent, Jr and his wife, Penny, and their three children, Tara, Bill III, and Angela.

In addition to his parents, Bob was pre-deceased by an infant sister, Mary Ellen Cronin and Michael’s first wife, Karen Cronin.

Bob is also survived by his extended family including great nieces, great nephews, cousins and close family friends. We may not have gotten together in person often but when we did it was as if we’d never been apart.

Bob’s smile sparkled from his eyes. His laughter was infectious. Bob was funny, witty, and kind with an incredible sense of fairness. While his neurological degenerative disease took away his ability to move as he wanted, it never took away his character. His favorite Bible verse, Micah 6:8, sums Bob up well: …the LORD has told you what is good, and this is what he requires of you: to do what is right, to love mercy, and to walk humbly with your God.

Because of Bob’s love for tennis and the Collins-Perley Sports Complex, family and friends are invited to attend a Celebration of Bob’s Life on Saturday, June 19th, 2021 from 10:00 AM to 1:00 PM at the Complex, 890 Fairfax Road, St. Albans. A time of reflection will be held from 11:00 AM to 12 Noon.

Assisting with Bob’s final wishes is the Heald Funeral Home, where messages of condolence are welcome at www.healdfuneralhome.com.