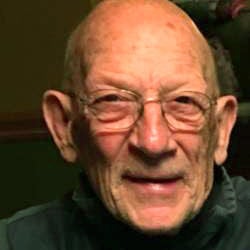 ST. ALBANS – Lloyd R. Jacobs, a longtime resident of this community, passed away Saturday evening, February 1, 2020, at his home in the comfort of his family.

Lloyd was a 1948 graduate of Bellows Free Academy and went on to serve in the U. S. Air Force. Following his honorable discharge, he was a longtime associate with the former Union Carbide Corporation. He was a life member of Green Mountain Post #1, American Legion, and longtime member of St. Paul’s United Methodist Church.

Lloyd was an avid outdoorsman, he loved to hunt with family, enjoyed deer camp in Montgomery, playing golf and watching football. Lloyd also enjoyed his daily walks on the Collins Perley Sports Complex walking path, especially when meeting up with his four-legged friends.

Lloyd is also survived by his “inseparable” twin brother, Lyle Jacobs and wife, Charlotte, of Fairfax; sister, Esther Ledoux of Plattsburgh, N.Y., and sister- in- law Joyce Jacobs of Essex, many nieces and nephews and special golfing buddies, Bobby and Kevin.

In addition to his parents and wife, Betty, Lloyd was pre-deceased by his brothers, Arnold, Kermit, and sister-in-law, Shirley Jacobs, also his four-legged walking companion, Henry.

Prayers of committal and military honors will be held Friday, June 26, 2020, at the St. Albans Bay Cemetery.

To send the Jacobs family a message of condolence or share a memory, kindly go to Lloyd’s online guest book at www.healdfuneralhome.com.